Report said conservative outlets were being left out

Facebook has responded to allegations in a Gizmodo report that its contract news curators actively censored stories from conservative publications when selecting which items appear in its Trending Topics section. In a statement given to The Verge, the company does not actively deny that members of its news operation were censoring stories from right-wing outlets like Breitbart and The Drudge Report. However, a Facebook spokesperson did say the company does not "permit the suppression of political perspectives" and has never banned a news outlet from appearing in the Trending Topics bar.

"We take allegations of bias very seriously. Facebook is a platform for people and perspectives from across the political spectrum," reads the statement, which was first published by BuzzFeed News. "There are rigorous guidelines in place for the review team to ensure consistency and neutrality. These guidelines do not permit the suppression of political perspectives. Nor do they permit the prioritization of one viewpoint over another or one news outlet over another. The guidelines do not prohibit any news outlet from appearing in Trending Topics."

Facebook does not "permit the suppression of political perspectives."

Facebook's Trending list, which contains stories curated mostly by contract workers on the company's news team, is a primary driver of traffic to news outlets. The neutrality of the entire operation was called into question today following Gizmodo's report, which features interviews with several anonymous former employees on that team.

Subjects in the story say they were told to "inject" stories from mainstream outlets into the Trending list that were not in fact trending at all or were not popular enough to be flagged by Facebook's algorithms. Meanwhile, stories from conservative outlets were actively passed over even when Facebook's algorithms deemed them trending. Curators say they were also instructed to avoid stories about Facebook itself. Just hours after the report went live, the story is now a trending on Facebook. 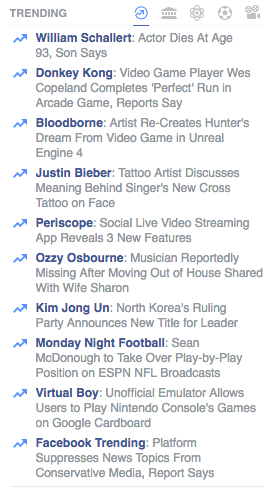 Gizmodo explicitly stated that it was unclear whether Facebook management was ever aware of any political bias among its contract news curators. However, the report has sparked a fierce debate around Facebook's editorial values when deciding which news sources to serve to its more than 1.65 billion users, many of whom now use the social network as a primary source of information.