These days, a silent hybrid is no big deal. But what we don’t often see on our suburban streets is a silent-but-deadly racecar that makes 573 horsepower while treading softly. I recently drove the 2017 Acura NSX in a slice of small-town Americana near Connecticut's Lime Rock Park raceway, a real-life Main Street, USA — and while the locals could barely hear me coming, they certainly heard me going.

The new NSX is a compromise of a mid-engine sports car that can play nice like a luxury sedan when it chooses, but has a naughtier, gnarly side, too. Basically, it's an Acura-borne exercise in dichotomy, which, for better or worse, makes for an excellent daily driver.

In quiet mode, the hybrid supercar is almost serene, thanks to its electric bias. But dial up the knob to turbo mode, and the healthy growl of the 3.5-liter V-6 engine reminds you that this is still a serious sports car. That growl, coincidentally, was exactly what I wanted in a small town on the New York–Connecticut border. When I revved the engine, heads turned. A pickup truck came to a halt. In a diner, old, balding men pointed. The phone cameras emerged. There it was, in all its glory, the reason most people like to drive a supercar: automotive envy. 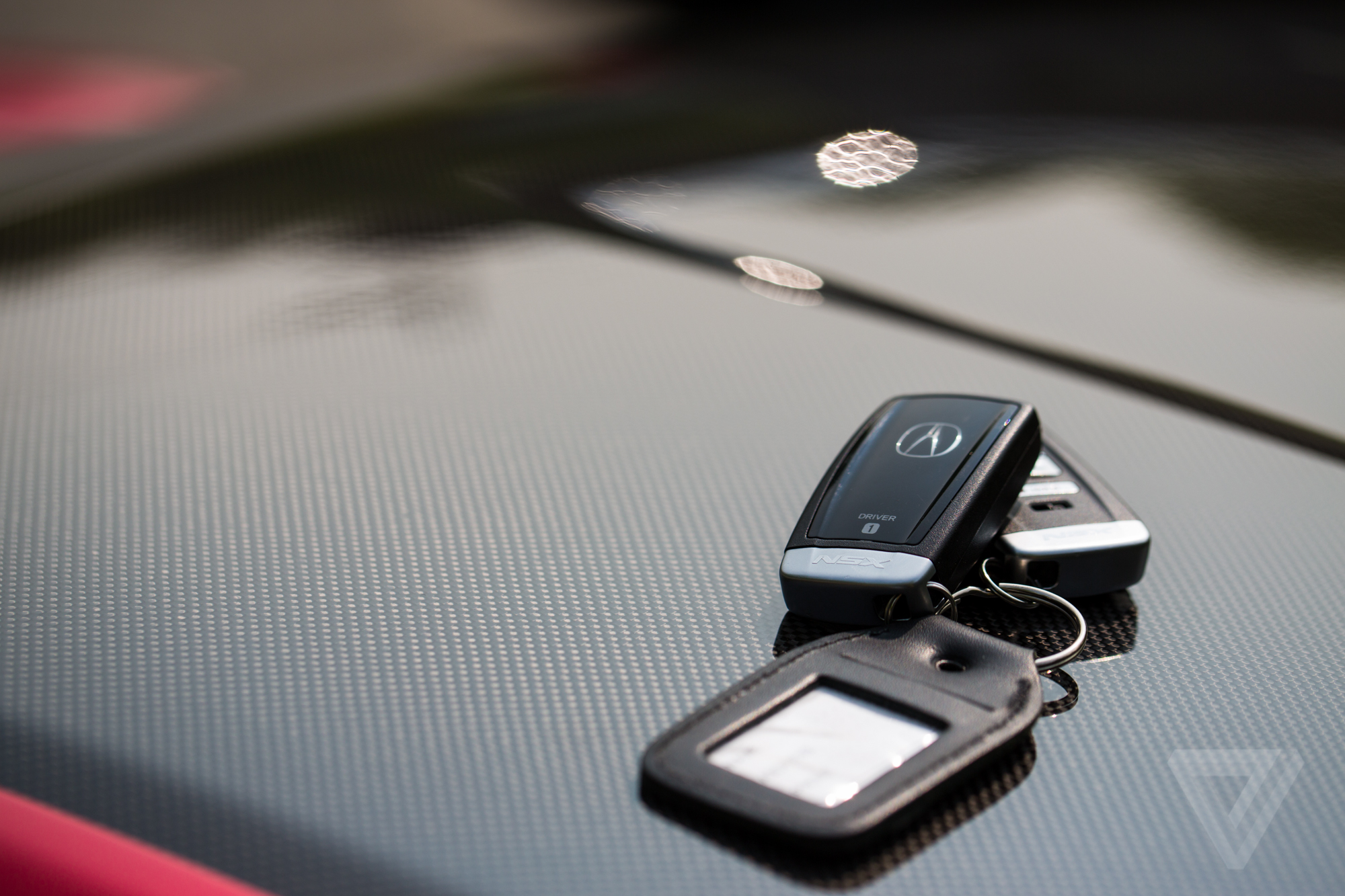 The NSX earned its street cred long before the 2017 model went into production. Its cult-like following dates back to 1990. First-generation NSXs — the first mass-production cars with all-aluminum bodies — were made for a decade and a half and have become coveted among collectors, pillars of the Japanese supercar scene.

It's a big reputation to live up to, and the 2017 NSX certainly looks like it means business. The black roof and wide-set taillights are signature cues from the first generation, while the functional air intakes give the new NSX its menacing face. Later in the day, parked on a country road, the cherry red aluminum body caught the light at the just the right reflection, and several people — not one, several — pulled off the road to get a closer look.

The NSX's interior is remarkably comfortable

But despite its aggressive appearance, the NSX's interior is remarkably comfortable. The seats hug the body; it’s more like a cockpit than a driver’s seat. My favorite aspect of the interior is in a tiny detail: the hidden stitching on the steering wheel, which feels like the seam of well-sewn suit jacket. The wheel stands in contrast to the buttons, knobs, and screen, which are reminders that deep down NSX is still a trusty, straight-shooting Honda. (Again, for better or worse.)

So does NSX have the mustard to compete with the Ferrari 458s of the world? Acura isn’t mincing words on that goal, but the real answer depends on what the driver is looking for.

On the one hand, it’s hard to dismiss Acura's claims of 0 to 60 in 3 seconds and a top speed of 191 miles per hour. Honda went back to the drawing board several times to tweak the car on its way to production, scrapping the original powertrain plans that called for a normally aspirated V-6 engine. The company ultimately settled on a twin-turbo V-6 that makes 500 horsepower and 406 pound feet of torque, and combined with the juice from the electric motors and the nine-speed dual clutch transmission, sends additional power to the wheels that add to the NSX’s grace on turns and straightaways. Combined, the car is good for 573 horsepower and 476 pound feet of torque. What this means is that NSX has serious racetrack credentials, but it doesn't have a problem regaining its composure. It’s crispy, fast, and reckless when you want it to be, but it can easily be reigned in. I found the sweet spot in Sport Plus mode, which sounds great and offers ridiculously responsive performance. 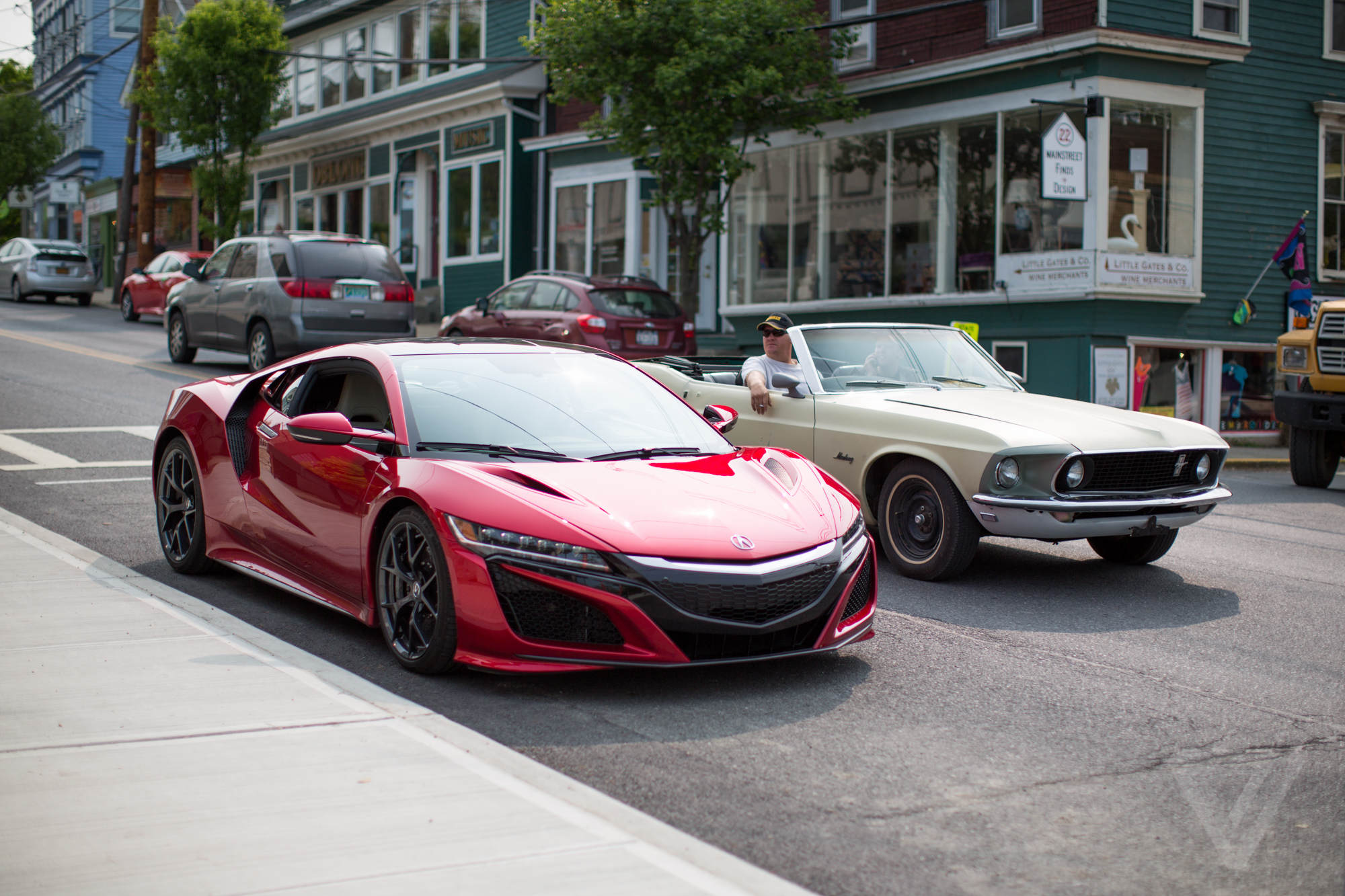 The byproduct of NSX’s hybrid powertrain is its modest (for a supercar, anyway) fuel consumption, which was about 21 miles per gallon on my test vehicle. Engineers also invented a new structure for the car that makes the mostly aluminum frame sturdier on both the front and rear. (Don’t expect to see mega crashes of NSXs like those wicked Ferrari YouTube videos.) And though I drove the all-wheel drive on a balmy day in late May, I imagine that with a good set of winter tires, it may even rise to the occasion in sleet and snow.

A small, close knit team of Ohio-based engineers did much of the work on this car (in fact, oddly, the Japanese NSX is the only supercar that can claim that it’s entirely made in America), and they lit up when I asked them if NSX is meant to be an everyday driver. That was their intention all along, it turns out — much like the original NSX, which forced Ferrari to respond with driver-friendly tweaks. As Acura returns to the performance category, they’re aiming to attract customers for practicality as well as the passion.

Many an enthusiast would balk at a supercar that plays it safe, but let’s be real for a moment and leave the supercar ego at the door. In real life, the average person (even one who can drop $157,800 on a ride) has little time for racing in the weekly calendar, which means the Ferraris gather dust in the garage in favor of the more practical luxury sedans. But the NSX is more flexible. The raw appeal of high-performance insanity aside, there's something to be said about the decadence of being able to comfortably tool around in this car.

But will the "refined supercar" approach actually work at the dealership? The new NSX just entered production a few days ago, so it doesn't have long to find out.