I saw Pride stand against prejudice in the Castro

I saw Pride stand against prejudice in the Castro

A night of mourning, singing, and drag nuns

The rally began even before I arrived in the Castro. On the Muni car, you could see them: rainbow flags and the flamboyant, bright style. One rider told another he didn’t know the Pride parade was today; she explained she was going to the rally for the queer people who were shot the night before in the Pulse nightclub in Orlando. There was a moment of awkward silence.

This was a community mourning their dead There would, in fact, be a march after the rally — from the Castro to City Hall, a half-hour protest walk. A way of showing politicians that the community was here, united, powerful, and unbowed. In that sense, the rally at Harvey Milk Plaza was in keeping with the legacy of Pride Month. As I came up from the Muni station, I saw a huge mass of people. Some wore black. Some wore rainbows. Some wore fabulous drag. This was the community mourning their dead. Unfortunately, LGBT people, especially those of color, have a lot of practice at mourning.

I came because I wanted to get away from the grief tourists; it was simply astonishing how fast the bigots lined up after the tragedy to cry their crocodile tears. Paul Ryan, the Republican speaker of the house who has voted to ban same-sex marriages and adoptions as well as opposing the Matthew Shepard and James Byrd Hate Crimes Prevention Act in 2009, tweeted that it was "horrifying to see so many innocent lives cut short by such cowardice."

Ryan wasn’t alone. Take, for instance, Mike Huckabee, the former governor of Arkansas: along with former Louisiana governor Bobby Jindal and former presidential candidate Ted Cruz, he attended a conference in Iowa with pastor Kevin Swanson, who believes gay people should be killed. Predictably, Huckabee was "praying for the victims of the Orlando attack and their families." As was Marco Rubio. The Florida senator was at least capable — unlike his most of his Republican colleagues — of noticing which group had been targeted. Of course, Rubio opposed marriage equality, legislation to make illegal discrimination based on sexual orientation, and allowing openly gay people to adopt children.

LGBT people weren't targeted by accidentOne by one, politicians who’d supported anti-gay legislation offered their "thoughts and prayers" en route to what really got them hot: terror. Islamist terror, Ryan will have you know. I find it curious that these people, who do not appear to value living gay and trans people, are suddenly so saddened by 50 dead in a nightclub. Queer people weren’t targeted by accident, and these politicians happily stoked the flames of hatred against the LGBT community. So what were they really doing? Oh, of course: the dead gay children were just another political lever to pull. What they want — well, I imagine we’ll find out. More surveillance? Drone strikes? Concentration camps for Muslims?

Faced with that kind of ugliness, I needed to go see the people who were actually affected by the tragedy. To see how they were coping, and what they were planning to do, and if I could help. So I went to Harvey Milk Plaza. It is, of course, named for the first openly gay man elected in California. Some asshole shot him, too. 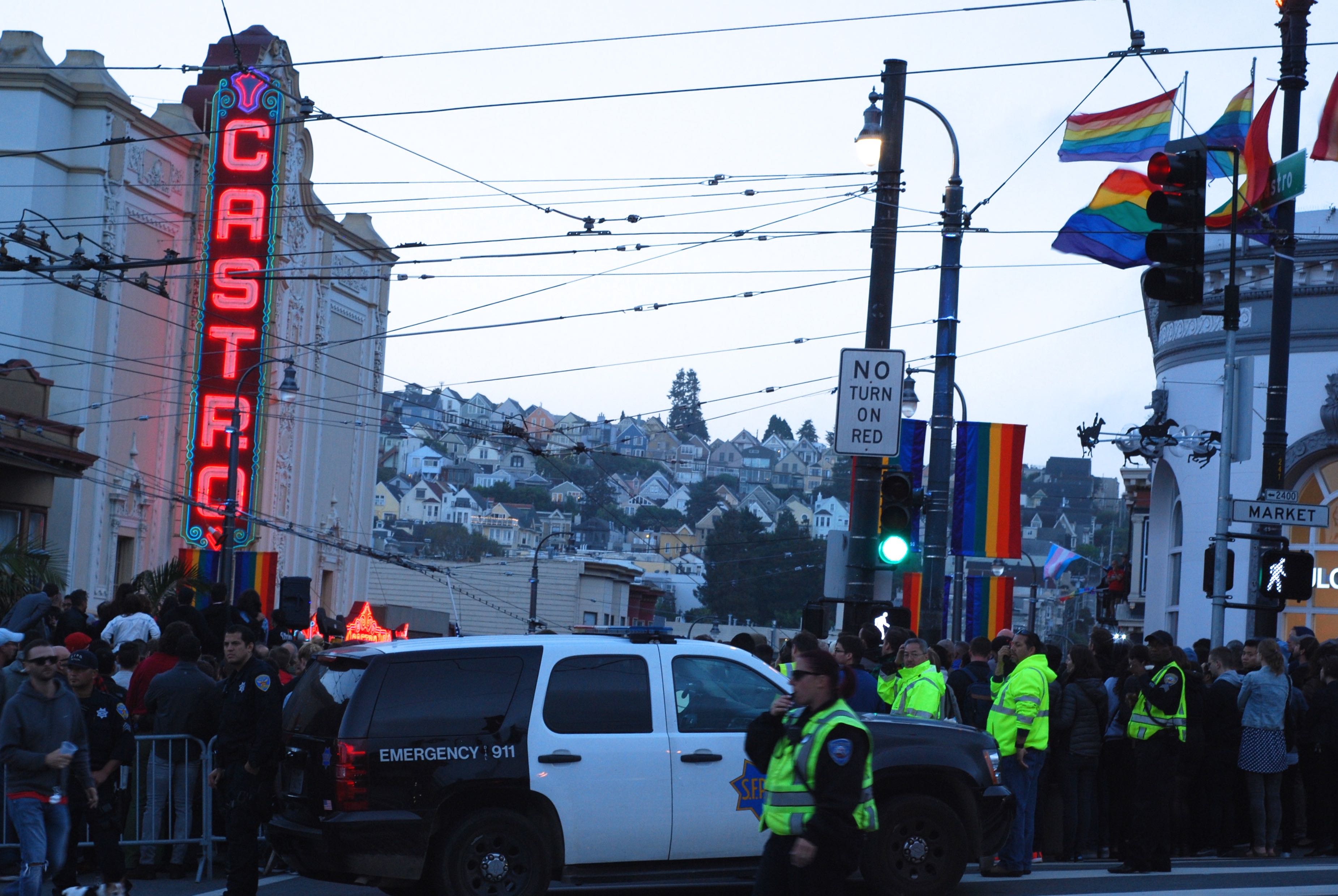 The view of the rally upon exiting the Muni: a heavy police presence.

I was late, and trying to find a friend, who was somewhere between a Soul Cycle and the Muni station. Across the street from Twin Peaks Tavern and its famous sign, is what I mean. The press of people was so thick that it was impossible — we couldn’t have been more than five feet apart, we figured out later, but we literally could not see through the crowd until after the speakers’ remarks. There were thousands of people there; threading through the mass of people took effort.

It was nice not to be alone. At one point, the crowd began chanting "Where’s the Mayor?" As it happened, he was in the process of being introduced. Mayor Ed Lee, once introduced, was then roundly booed by the crowd, as was the National Rifle Association, Texas’ Lieutenant Governor Dan Patrick (he tweeted an ill-timed Bible verse), and Islamophobia. Signs read things like "NRA sells death," "Hate begets hate — love now," and "Standing in solidarity with my LGBT community and my Muslim-American friends." A tiny dog wore a rainbow sweater. There were a lot of dogs, actually. Around me, people were often in tears — especially near the end of the rally, when the San Francisco Gay Men’s chorus led the assemblage in "We Are Singing For Our Lives."

In a way, the political moves after the massacre made sense: just pit Muslims against gay people and bring down the left by pretending it’s hypocritical to care about Muslim and LGBT lives at the same time. Except, of course, that "gay" and "Muslim" are more like a Venn diagram; there are people who are both. Maybe the straight community can be fooled by the faked grief from a group of people who consistently legislated against LGBT folks. But here in the Castro, the LGBT community and the Muslim community made a point of embracing. The anger in the crowd — and there was plenty — was aimed squarely at bigotry and at guns. When Tom Ammiano, a state assembly member, said "Fuck the NRA," the crowd cheered. I did, too.