When Google first announced its plan for a balloon-based Wi-Fi system called Project Loon, it was unlike anything most of the world had ever heard. But now, a company called Space Data Corporation is claiming it developed that technology more than a decade earlier — and Google’s moonshot was based in part on its proprietary trade secrets.

In a complaint filed earlier this week in Northern California District Court, Space Data cites two patents that Loon allegedly infringes on — one dealing with providing connectivity through a network of balloons (filed in 1999) and another dealing with the termination and recovery of those balloons (filed in 2001). Both patents predate Loon and the company does not appear to have licensed either one. Google holds a number of its own patents on Loon’s technology, granted without reference to Space Data's technology.

Space Data currently offers two products — SkySat and SkySite — both of which aim to provide balloon-based connectivity in a similar way to Project Loon. The system does not appear to be in wide use, although the company does hold FCC licenses to provide broadband spectrum services in remote areas of Alaska and the Gulf of Mexico.

There’s also reason to think that Google’s top executives knew about Space Data’s work during the period that Loon was being conceived and launched. In February of 2008, Google founders Sergey Brin and Larry Page visited Space Data’s headquarters with as many as 10 other Google executives in tow.

The visit was subsequently reported by The Wall Street Journal, fueling speculation that Google might contract with the company or even purchase it outright, but no partnership ever materialized. Three years later, informal work began on Project Loon. 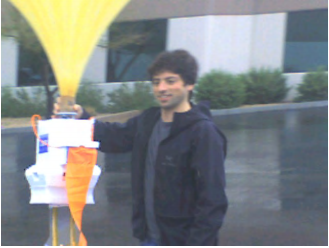 The executives involved signed non-disclosure agreements before the visit, and Space Data is now alleging that the subsequent rise of Project Loon is reason to think those agreements were broken.

Reached by The Verge, Google declined to comment on the lawsuit.

It’s not the first time Google X has fended off allegations of trade secret theft. In 2014, architect Eli Attia sued X over an architecture spinoff that he claimed was based on his proprietary Engineered Architecture system. The case followed a similar pattern, with Attia deeply involved in the early stages of the project, but increasingly marginalized as the project came closer to being deployed.