It’s not really accurate to describe Nintendo’s E3 2016 show floor presence as a booth — it’s more of a shrine. And that shrine is dedicated almost entirely to one thing: the upcoming Legend of Zelda: Breath of the Wild, which is launching on both the Wii U and NX some time next year. This year’s showcase in Los Angeles is the first time that the much-anticipated game has been playable by the general public, and Nintendo is using the opportunity to make Breath of the Wild arguably the biggest attraction at E3.

On the second day of the show, the line to play the game stretched around Nintendo’s massive booth, with a wait time measured in hours. It was so big that there was a line to get into the line. Meanwhile, the inside of the booth was resplendent with massive sculptures, showing off larger-than-life renditions of hero Link and some of the game’s ancient enemies. Zelda was everywhere you looked. When I sat down to chat with Reggie Fils-Aime, president and COO of Nintendo of America, even his outfit was in the spirit; he paired a smart plaid blazer with a pair of Zelda-themed Vans sneakers.

The Legend of Zelda is one of Nintendo’s most iconic franchises, but it’s far from the company’s most commercially successful series. It’s not exactly a sales slouch: over 30 years, Nintendo has sold more than 75 million Zelda games. But those numbers pale in comparison to some of the company’s biggest hits. The original Wii Sports, for instance, is Nintendo’s best-selling game, moving more than 82 million copies since its debut in 2006. But even still, Zelda commands a level of respect that goes beyond just sales numbers, as it reaches a dedicated group of players who follow Nintendo from console to console. People get more excited about a new Zelda announcement than just about any other video game.

At E3, those devoted fans were treated to a game that looks very different from past Zelda adventures. While it features familiar elements and the same protagonist, Breath of the Wild modernizes the Zelda formula in a lot of ways. It takes place in a vast open-world, one where you're free to explore however you like, with no predefined path looming in front of you. There are elements of crafting — you can build new weapons from gathered resources, and cook food to replenish your health — as well as survival features that add a touch of realism. Link now has to worry about the weather, for instance, as extreme heat and cold will affect him unless he changes clothes. He also has to think about noise for the first time: if you want to hunt an animal, you’ll need to sneak up on it and approach quietly, lest your dinner run away.

These aren’t exactly groundbreaking features, as crafting elements and open-worlds have become staples of blockbuster games in recent years. But for Zelda — a slowly evolving series where nearly every game follows the same basic formula — these additions mark a huge shift. I played around 45 minutes of Breath of the Wild, and it feels remarkably different than any other game in the series. Instead of just following a set path, I was able to go basically anywhere I wanted, and I often found myself distracted by running animals and enemy encampments. I spent a lot of time taking down bad guys and pillaging resources at the expense of the story. While some of the changes are big, even small details altered how I played; I couldn’t just swing my weapon wildly like I usually do in Zelda, as it degraded with every use. I had to actually think about what I was doing, and plan accordingly.

Fils-Aime believes that these changes were necessary to introduce the series to new players who haven’t grown up with the many iterations of Hyrule over the years. "The Zelda formula is well known," he says. "You continue down a path, you battle in a dungeon, you get an item, you’re going to need that item for the next dungeon, and so forth. We think that for today’s player... that formula potentially needed to be upended — that we needed to introduce new elements in order to bring new players in. But we needed to do it thoughtfully in order to maintain the current player." 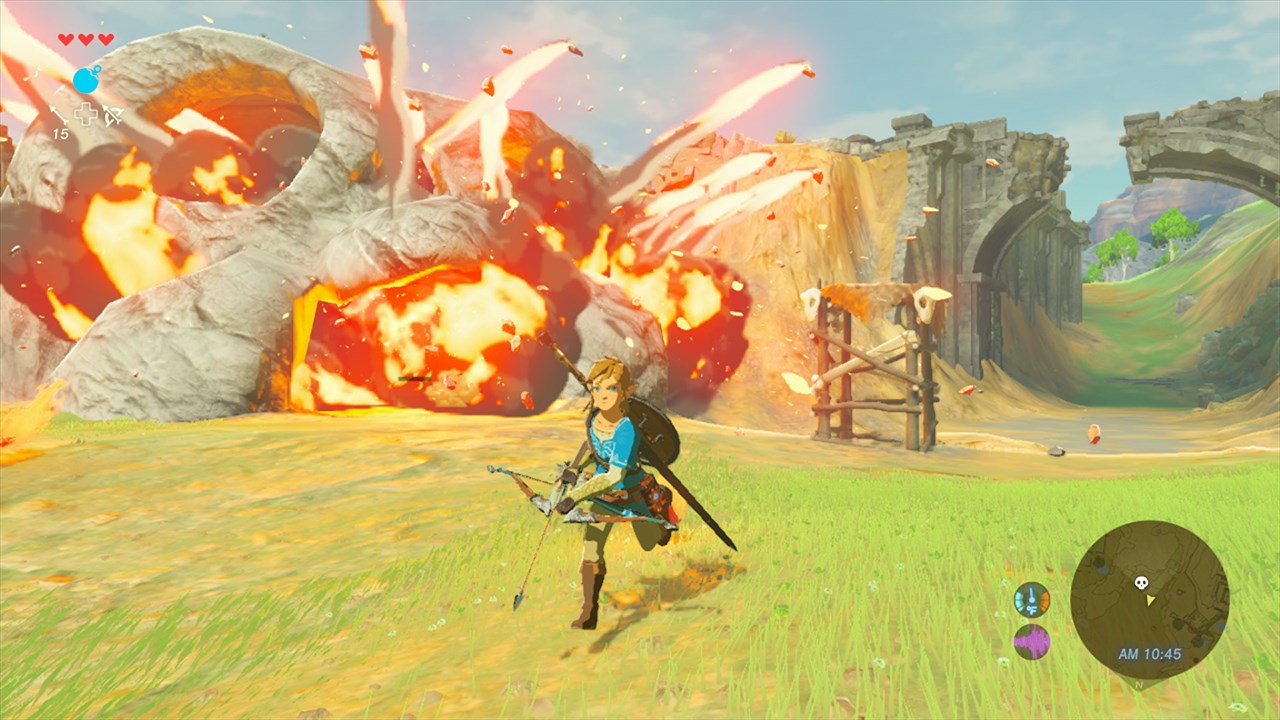 While Breath of the Wild is being developed in Japan, helmed by long-time producer Eiji Aonuma, many of the changes and updates that make it feel so fresh are elements typically found in Western-developed games. Titles like Grand Theft Auto and Assassin’s Creed helped usher in a wave of open-world games, while role-playing games such as Fallout or The Witcher 3 introduced crafting and survival elements to a huge new audience. Since the Zelda series is traditionally more popular in the West than in Japan, you might assume that these changes were made to appeal to that core audience — but Fils-Aime says that isn’t the case. In fact, the company has found that games more closely associated with the West actually do quite well in Japan.

"Behaviorally, the Japanese home market and the West, aren’t so different that the tastes are fundamentally polar," he says. "A great example of this is Splatoon. [An online multiplayer shooter is] something that you would associate with the West, and yet in Japan the amount of players playing Splatoon, the amount of games sold relative to the install base of Wii U, is better than the US performance. It all comes down to this: is it fun? Is it compelling? Is it unique? Does it provide something to the player that they really relate to?"

Most new Zelda games come to define the hardware they’re available on; it’s hard to talk about the Nintendo 64 without mentioning Ocarina of Time, just as A Link to the Past helped set a higher bar for what a Super Nintendo game could be. In the case of Breath of the Wild, the game could come to define two potentially very different pieces of hardware. When it does launch next year, it will likely be the last major release for the struggling Wii U, while also being one of the early system sellers for the mysterious NX system, which is due out next March.

It’s something Nintendo has experience with, having launched The Legend of Zelda: Twilight Princess simultaneously on both the Gamecube and original Wii. Fils-Aime — who started at Nintendo while Twilight Princess was still in development — says that that experience was "tremendously positive." And he doesn't think that being on two platforms will add to Breath of the Wild's already outsized expectations.

"I don’t know that the expectations can get any higher," he says.

30 years of The Legend of Zelda