The very intelligent business people at VODOHOD River Cruises have hired two cats to oversee operations on their Nikolay Chernishevsky cruise ship. The ship cruises between Moscow and St. Petersburg, traversing several rivers and the Baltic Canal — the journey sounds truly lovely and involves a pit stop at a "Blood Church." Also two cats work on it!

These cats are so precious it almost makes up for the fact that drinking water ("water in ship restaurant") is not included in the price of the cruise. The only thing I don't like about these cats is that they are employed to look cute and wear great outfits, and that's not what I get paid for. My job isn't the most hard, but it's not as fun as being asleep in the sun all the time either. I just find it hard to believe that these cats have performance reviews, you know?

Unlike these cats, my job doesn't require that I be perpetually surrounded by my biggest fear in the world, so I do appreciate that about Vox Media. 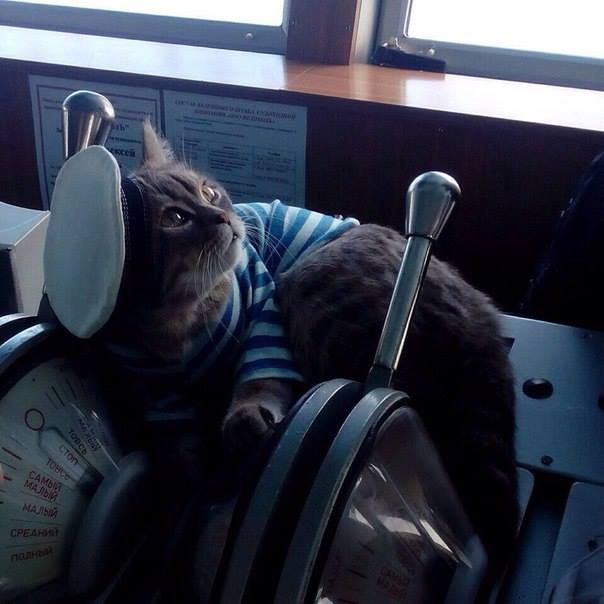 This cat's named is Bosun, which is Russian for "boatswain," which is a great, Old English word which basically means "boat janitor." Please observe how Bosun carries his hat when he'd rather it wasn't on his adorable head:

The other cat's name is Matros, which is Russian for "deckhand." This cat was named second, after the good boat cat name was taken. As a small comfort, he is apparently allowed to sleep on the job. He seems lazy, but I don't care. 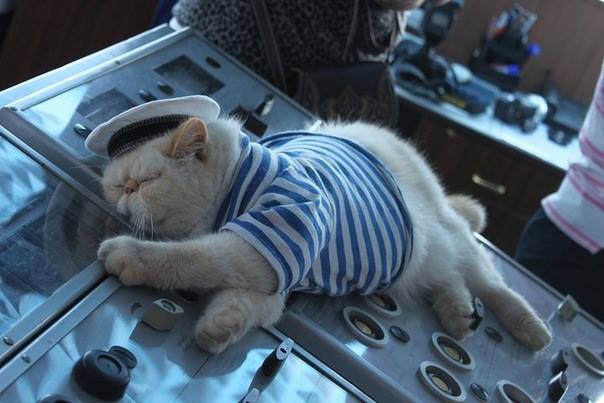 Here is a very soothing video of Bosun and Matros going about their duties on the Nikolay Chernishevsky — set to some light elevator-jazz / zydeco music. Please play it at my funeral.