Earlier today, Donald Trump tweeted a screenshot from a flight simulator rendering of Redding Airport in California, apparently believing it was a freely available photograph of the airport itself. Now, the person who first took that screenshot has asked Trump to take the tweet down, claiming the Trump campaign has effectively stolen his property.

"I never gave them permission to use it," said Jeroen Doorman, who first posted the image as a thumbnail for a Flight Simulator X video on YouTube, the apparent source for Trump's tweet. "I’m not a big fan of any political game of any country and since he has a big pile of money he should be able to find other things to use that are not property of someone else." Doorman says he emailed Hope Hicks at the Trump campaign after the tweet went up. The tweet was removed shortly after. 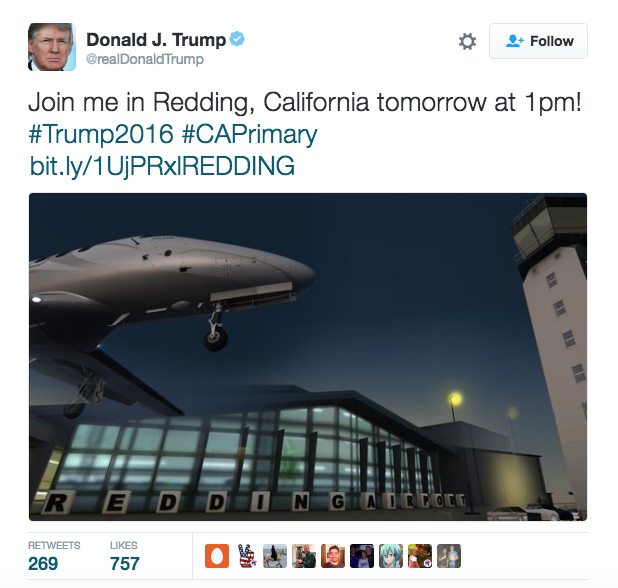 The environment itself was made by OrbX, a company that designs flight simulation scenery, but OrbX itself has voiced no objections so far and Doorman isn't affiliated with the company. He's just a fan who wants to protect his work.

Doorman also has no objection to Trump's policies per se; he just wants to protect his property. "I don’t care about politicians and what they have to say," Doorman says. "I’m just that simple videomaking guy from the Netherlands."

The Trump campaign did not respond to a request for comment.