2014's best meme returns, only to be brutalized by TV morning show

2014's best meme returns, only to be brutalized by TV morning show

Memes are ephemeral novelties. The best evolve. The worst are abandoned. No meme lasts forever. That’s why the return of 2014’s best meme is so odd. 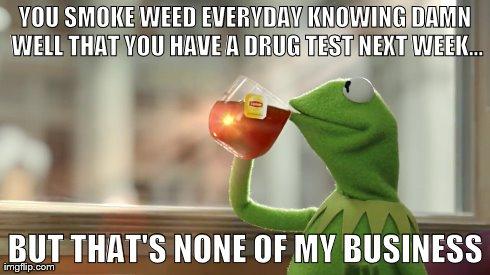 Usage of BTNoMB climbed into the fall of 2014, then declined into the beginning of 2015. Like most memes, usage plateaued as its function shifted to a referential callback joke. Eventually BTNoMB reached the nadir of all memes: the Facebook political post.

And yet, BTNoMB has returned! On Sunday, LeBron James and the Cleveland Cavaliers won the NBA Finals, beating the infinitely hyped Golden State Warriors. To celebrate, James wore a cap embroidered with Kermit sipping tea. The hat made James' message clear: "We just beat the best team in basketball. But that’s none of my business."

And so began the rare second life of a meme. On eBay, over a thousand similar Kermit hats have been sold by tiny entrepreneurs with the production speed of first responders. Mainstream papers, from USA Today to the New York Daily News, attempted to explain the meme to an audience whose most recent interaction with Kermit the Frog was deleting their DVR subscription of the aborted Muppets reboot.

This morning, Good Morning America pulled a muscle while stuffing a tweet with the stilted meme-speak of an FBI agent trying to infiltrate a Hearthstone subreddit. Good Morning America’s tweet doesn’t call the meme by its name or even mention Kermit. Instead, we get #tealizard. Naturally, #tealizard is now its own thing.

An intern spoke up and said "Oh it's just hashtag tealizard" as a troll and someone fell for it & hit tweet, right? https://t.co/ubEiKKZncM

when your good name has been through some shit lately pic.twitter.com/2vdhUskcKZ

If you don't know about #TeaLizard and #smockin now is time to get on board the meme train pic.twitter.com/0e5dx6TUmq

Literally the definition image is a lizard vs frog. Pop culture and science are strangers to @GMA #tealizard pic.twitter.com/q6KxstyPLp

This is the internet in 2016. Meme culture, built atop referential humor, is old and broad enough to reference itself. Memes are a self-sustaining ecosystem, reviving individual organisms so that they will birth fresh meme babies into a bottomless tub filled with the humor bile in which we all bathe.

Months from now, the MVP of the Super Bowl will celebrate with a tattoo of #tealizard and we'll all have a good laugh about this.