How many times have you heard the following statements?

"Doctors are over-prescribing Adderall and/or Ritalin"

I haven't really looked into the origin of these broad declarations but I hear them repeated all the time. It's fascinating to me how they are just accepted as fact. There doesn't seem to be a partisan bent to it either, I have heard these repeated by people on both sides of the political spectrum.

It's at this point I should mention that I have ADHD, I found out about a year ago and I've been reading up on the disorder ever since. I basically just didn't care about these statements until my diagnosis but now I fully understand why they matter and why they are destructive.

the honest truth that I am guessing everyone has realized at some point or another about mental illnesses: it's all made up.

Here is something I wish every single person knew about attention deficit hyperactivity disorder, it is one of the dumbest names for a disorder that I can think of. In addition to not properly describing the core problems of ADHD, the symptoms it describes are fairly trivial. Paying attention? Who doesn't have this problem? As the ADHD researcher Dr. Russell Barkley put it, to call ADHD what we do now is somewhat akin to calling Autism hand flapping disorder.

At its core, ADHD is a problem with the executive functions. What is executive functioning exactly? Essentially it is the space between when stimuli are received and when we respond. These functions analyze the stimuli and put them into context with long-term goals.

So for instance, if I am doing homework and my friend walks in asking if I want to grab a beer (the friend and his request being the stimuli), the executive functions will be able to call up the relevant information that will set me toward re-engaging and completing the assignment. I should then promptly be able to tell my friend that I am doing homework, which is what I know I should be doing instead of getting wasted.

Except for me, it generally doesn't work that way. Having ADHD by its very definition means this executive part of my brain is significantly impaired. So (unmedicated anyways) I am constantly prioritizing what is going on in the now above everything else. It is immensely difficult for me to organize my day or prioritize tasks because I cannot keep my goals in mind. In only so many words, my problem is not a knowledge problem, it is leveraging my knowledge at the proper times. You can now see how a very common symptom of this is not paying attention to the task at hand.

This took its biggest toll in the form of schoolwork. Quite literally every marking period in middle school, high school, and most of college, I would get progress reports saying something up the lines of: "intelligent, does not apply himself." Not only would I have a hard time paying attention in class for more than a few minutes at a time, I would have an impossible time doing homework. I would start an assignment, immediately get sidetracked when anything more interesting came up, and never finish my work. I can't even begin to tell you how frustrating it was to be constantly told I wasn't trying when I was in fact trying as hard as I possibly could. Being called lazy by teachers was something I experienced for most of my time in schooling and just accepted as fact. 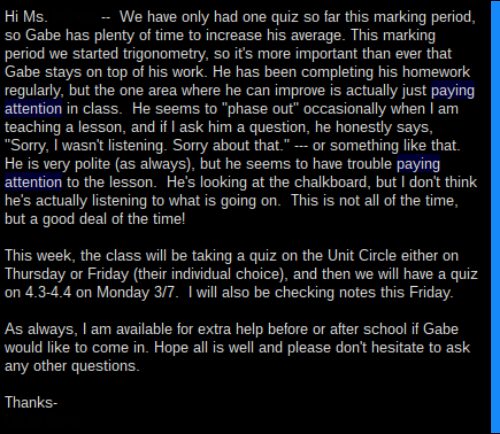 This was an email my mom received from my 11th grade Pre-Calc teacher. As you can see, the teacher is clearly describing my possession of the most famous symptom of ADHD: attention deficit. I ended up getting a C- in the class.

I'm not saying all of this to elicit sympathy. My symptoms are now under control and I'm a pretty darn happy guy, but I am trying to make a point here. A mental illness by its very definition is where a problem of the mind causes problems that significantly impair well being. ADHD without question meets this criteria. There are all sorts of complications that come with this executive function deficit. ADHDers have four times the risk of dying in a car accident, are 2-3 times more likely to die before age 46, have substantially lower rates of finishing high school or attending college, and have very high risks of developing other serious mental health and medical issues.

This is probably going to be yet another two parter. I'll talk more about the stimulants in the next piece but let me deal with this over-diagnosis myth. Here is the honest truth that I am guessing everyone has realized at some point or another about mental illnesses: it's all made up.

It depends on one's philosophical views of course, but mother nature did not give certain people ADHD and others not. This is the same thing for a disease like cancer, the point in which the disease is cancer and the point at which it is not cancer is entirely a human definition. This is what humans do, we make sense of things by categorizing a world that is notoriously difficult to categorize.

ADHD is a dimensional disorder that is the extreme lower end of those abilities related to executive functioning and self-regulation. It became such a categorization because it was found that the symptoms when severe enough put substantial burdens on a person's life. As a matter of fact, you can't be diagnosed with ADHD without a mental health professional identifying that the symptoms pose such a burden, known as impairment.

Now given all this information, it is easy to see why over-diagnosis is mildly absurd. What does that even mean? Mental health professionals created the diagnosis after all and they are the only ones that can diagnose. Are they ignoring their own terms and just giving people the title of ADHD just because? Is there a huge epidemic of people lying to their doctors in order to get stimulants to fuel drug habits?

Probably not, and even if these things were true, they would be incredibly difficult to prove with any degree of certainty. Far more likely is that there are many people out there who simply haven't come into contact with a mental health professional and never even got a diagnosis in the first place.

There is data to back this up. A study published in 2006 by Dr. Ronald Kessler at Harvard University done with Dr. Barkley and other colleagues found that just 10% of adults with ADHD in a large population sample had ever been formally diagnosed with it or treated specifically for it. More recent studies show that only 60-70% of children with ADHD are diagnosed and treated specifically for it. There are plenty of communities in the US where mental health services are woefully lacking and few people ever come into contact with a mental health professional regardless of background.

Heck. I grew up in a well-educated, suburban community and I wasn't identified until I walked into a psychologist's office last year for a completely separate issue. All of these things strike me as a significant reason to assume under-diagnosis. So in sum, this common wisdom of ADHD being over-diagnosed is uninformed at best, highly destructive at worst. It most certainly creates an unnecessary stigma around the disorder and makes it far less likely that educators, parents and potential patients will view ADHD symptoms as a problem. This prevents individuals with one of the most treatable problems in all of psychology from actually receiving said treatment. For the final part of this series, I will talk a little more about stimulants, why they really aren't that bad, and why I'd like to see more kids on them.