Acer Chromebook 14 review: a good value, but unprepared for the future

Acer’s Chromebook 14 is a two-sided story. For one, it shows the remarkable progress that we’ve made around what a $300 laptop can and should be. It’s made of aluminum, has a fantastic keyboard / trackpad combo, and a crisp 1080p display. And it does Chromebook things (web browsing, email, Google Docs, YouTube, Netflix, Spotify, etc.) adequately.

But on the other end, the Chromebook 14 is hindered by its lack of a touchscreen — just as Google prepares to usher Android apps into Chrome OS. You’ll be able to use those apps, sure, but navigating smartphone apps with a keyboard and trackpad is about as unholy as eating pizza with a fork and knife. Still, only a year or two ago, your $300 would’ve gone toward something far worse. 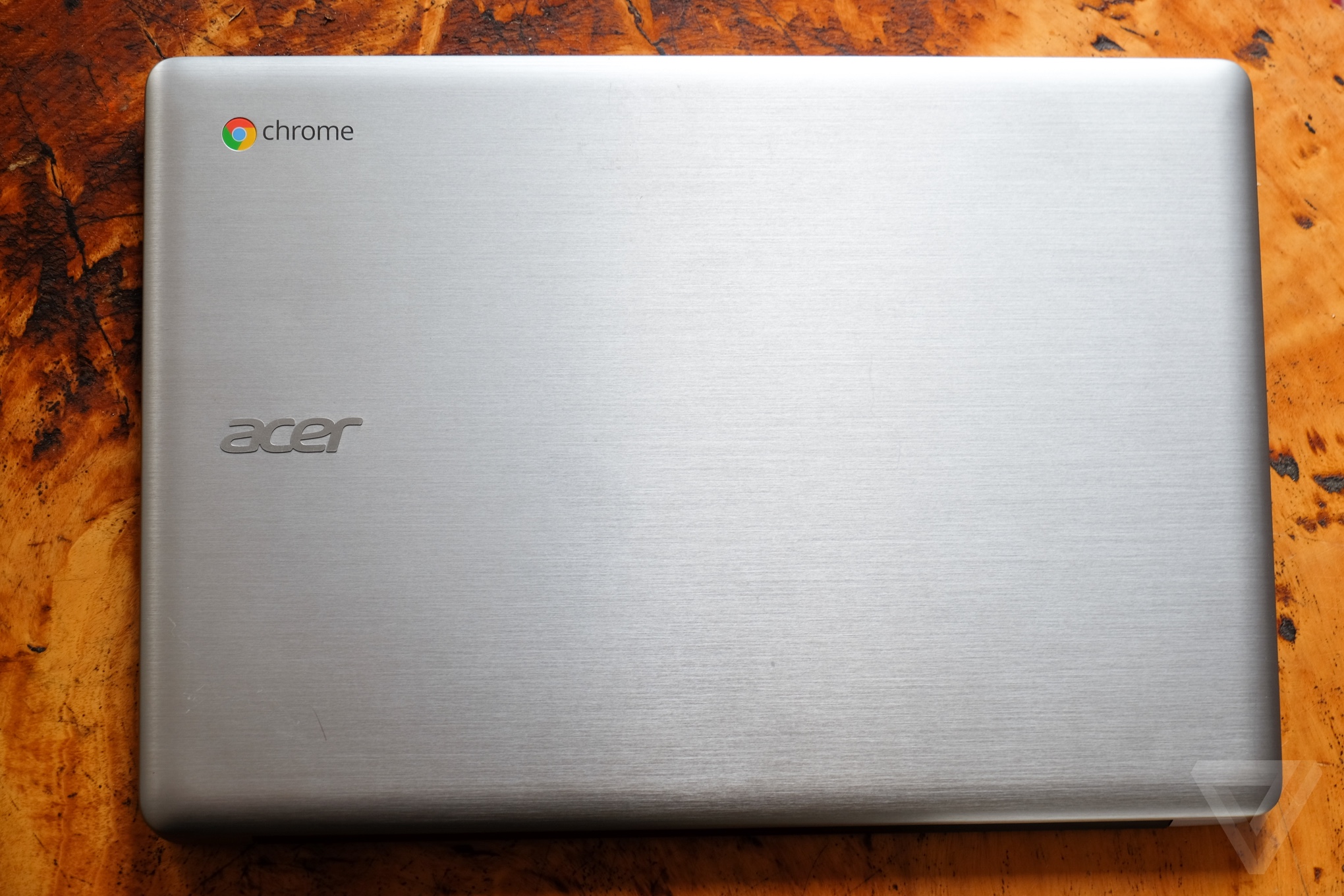 The Chromebook 14 presents itself spectacularly well. Acer’s glossy metal logo contrasts nicely with the brushed-aluminum lid. It weighs 3.42 pounds, which isn’t really toss-in-a-bag portable. It’s nowhere close to MacBook or ultrabook territory. Nor is the Chromebook 14 particularly thin; when closed, its lid sits ever-so-slightly higher than my 15-inch MacBook Pro, despite product dimensions claiming it’s only 0.67 inches — clearly Acer measured the laptop’s thinnest point. Even so, if you’ve got a messenger bag or backpack, it’s not like you’ll have any issue hauling Acer’s latest Chromebook to Starbucks.

A premium look and feel for a low price

Open up the lid and you’re met with a 14-inch, 1080p IPS LCD. Displays are frequently an area where Chromebook makers skimp to hit an affordable price point, but I can’t really say that Acer has done so here. The screen is sharp and reasonably color accurate (if a little on the dull and warm side). Viewing angles are also satisfactory. My number one complaint about the Chromebook 14’s screen is that it doesn’t get as bright as other laptops. That might prove annoying if you’re using it in a very bright room or direct sunlight, but on the plus side, the display does a great job mitigating glare. Oh, and it’s not a touchscreen, so swiping web pages and tapping on links is out. That’s not a major headache now, but considering where Chrome OS is going, it could turn into one. More on that later. 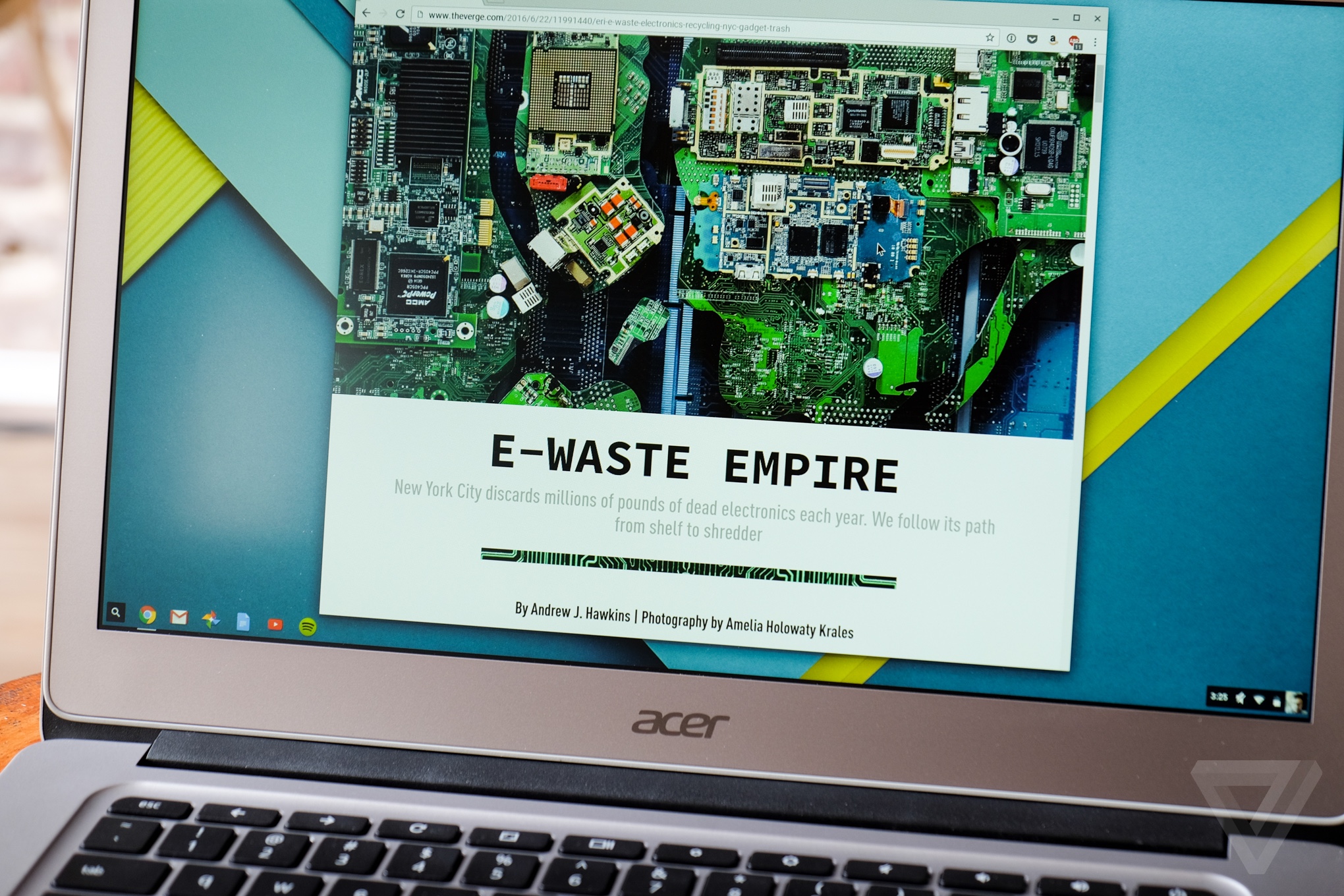 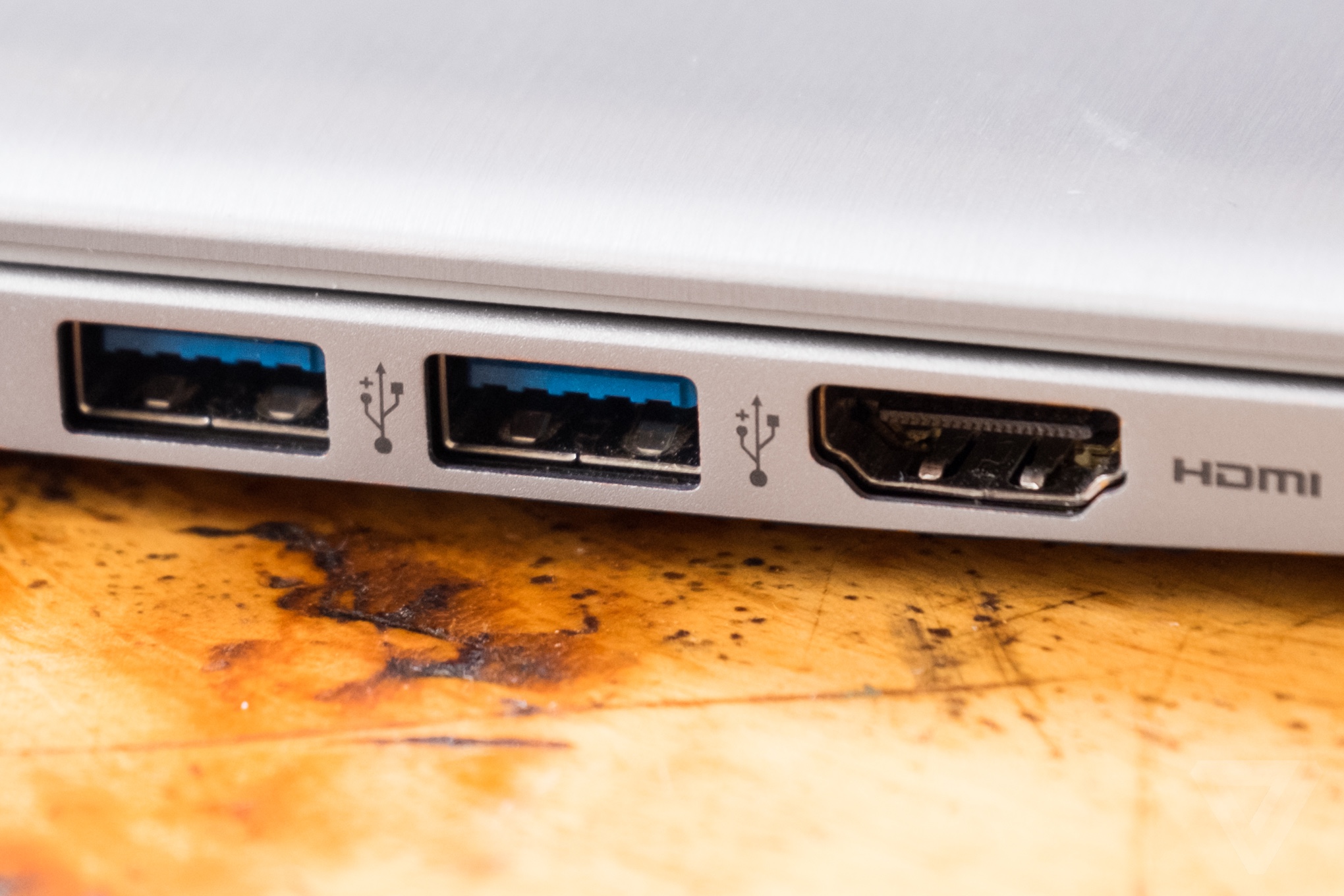 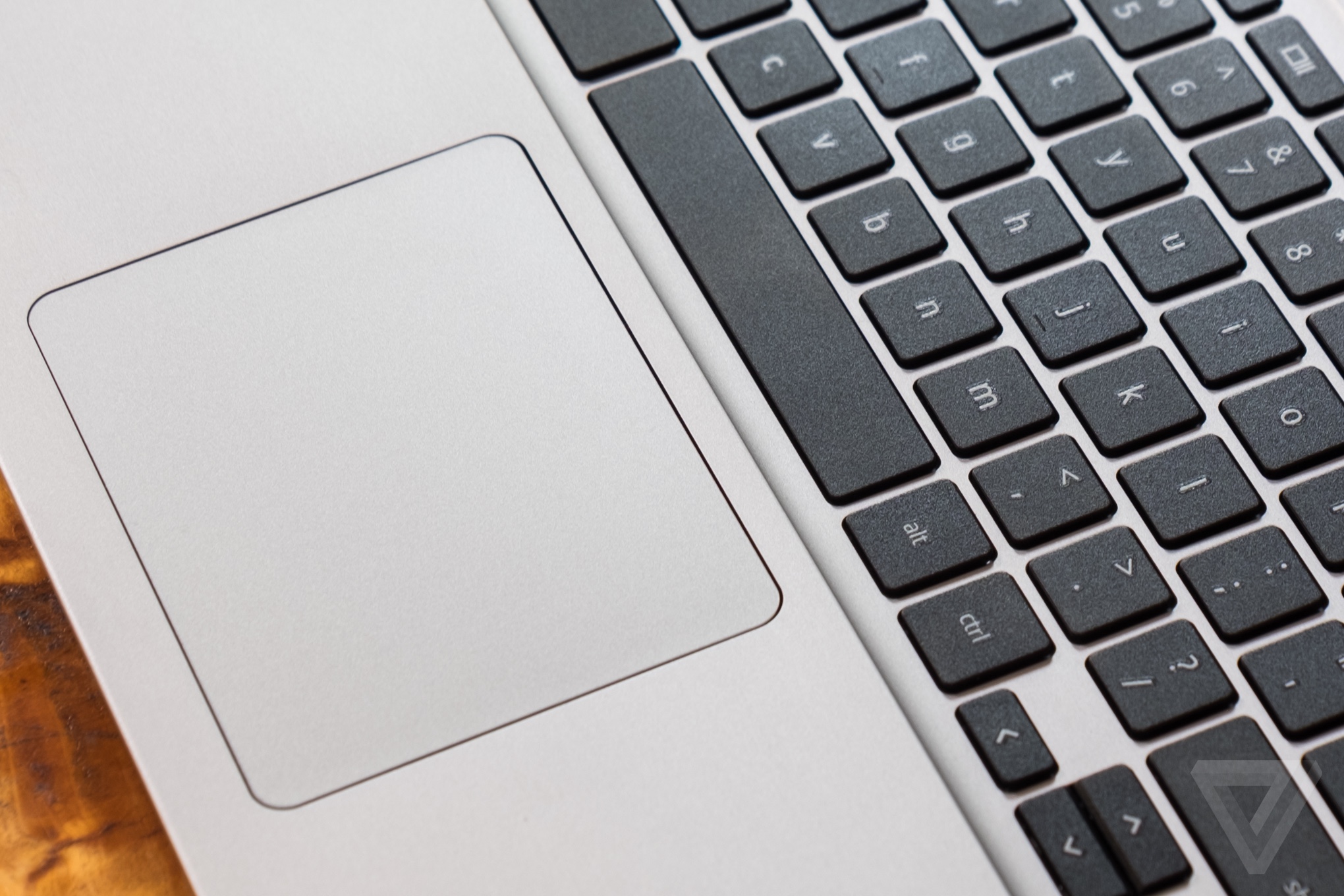 The keyboard is definitely a highlight. Keys are spaced nicely, and although I’ve seen other reviews complaining about shallow travel, it’s not really something that stood out to me. There’s no backlighting, unfortunately. Maybe that’s a lot to ask for from a $300 laptop, but it’s such a useful feature that I cringe every time it’s not there. The trackpad achieves a similar "fine" grade. I didn’t notice any obvious issues or hiccups with two-finger scrolling or Chrome OS’ three-finger gestures.

A metal outer construction doesn’t automatically translate to "perfect" though. The display has some flex to it, and if you squeeze the right side of the palmrest hard enough, it’ll actually move the trackpad and register a click. There’s also a gap between the lid and bottom casing when the laptop is closed. It’s nothing egregious, but you’ll probably get some dust in there. The mesh-covered speakers on the bottom aren’t likely to impress anyone, though they do get fairly loud. And then there’s the port situation; the Chromebook 14 offers two USB 3.0 ports, a full-size HDMI output, security lock, and a headphone jack — plus the power input. That’s all well and good, but the lack of an SD card slot is pretty unforgivable. Again, this Chromebook isn’t particularly small, so the fact that you’re left with no way to expand the 32GB of built-in storage or easily pull up your camera photos is pretty frustrating.

The lack of a touchscreen will be a major inconvenience soon 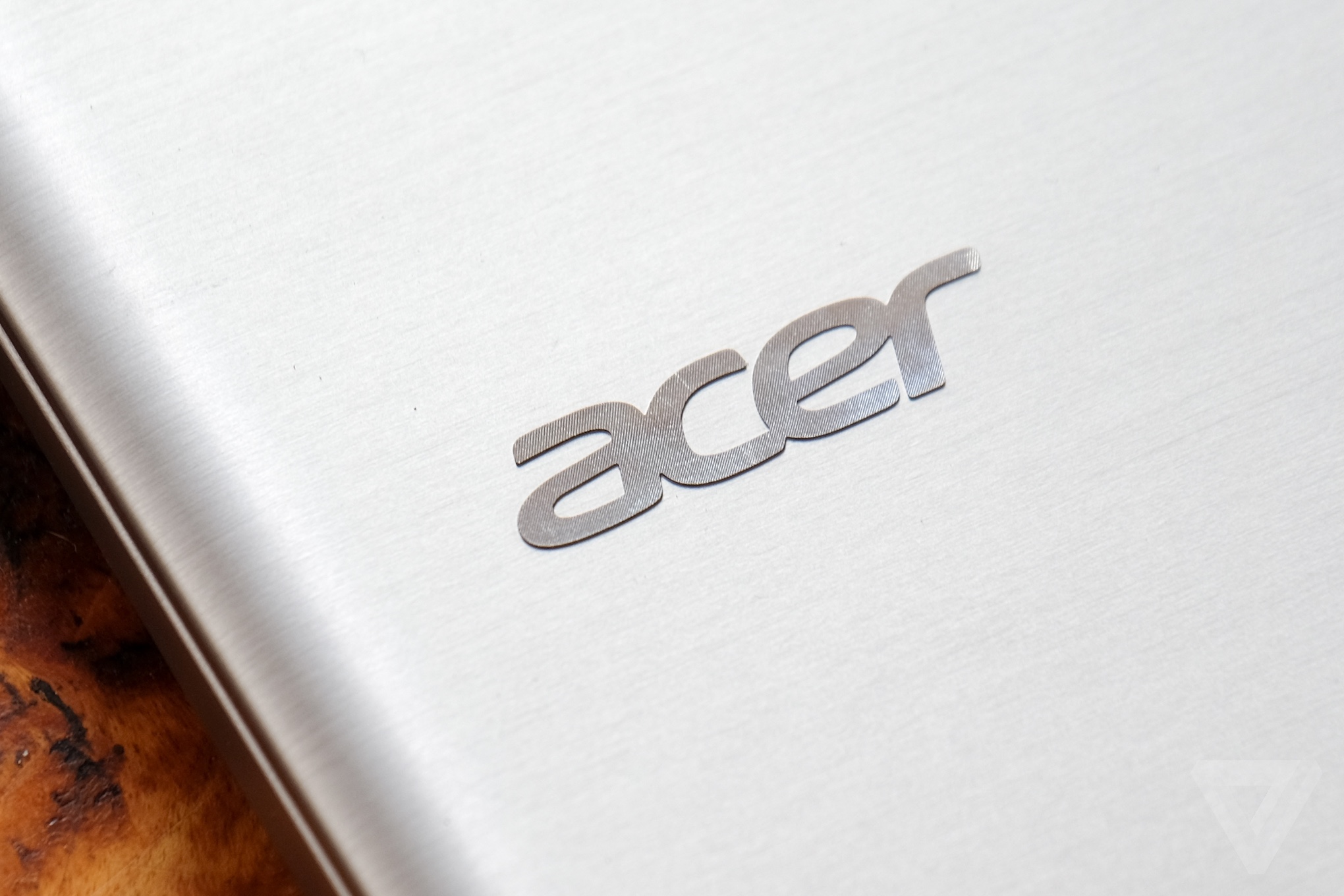 The Chromebook 14 does a respectable job of juggling Chromebook tasks. The Intel Celeron processor and 4GB of RAM give you some breathing room when it comes to open tabs and multitasking, but it’s still not a machine you’ll want to push terribly far. I noticed occasional lag and stutters at moments where I wouldn’t have expected performance to struggle, but these interruptions were infrequent. For the most part, the Chromebook 14 is just as good as other recent Chrome OS laptops at running a web browser and streaming video. It’ll drop frames occasionally when you’re watching 60fps content, but that’s more an issue with Google’s poor optimization than a bad reflection on Acer’s Chromebook. The Wi-Fi connection held strong wherever I used it, and battery life ranged between eight and 10 hours, so a full charge will have you set for the day.

But I’m not so confident you’ll have a great time running Android apps once those arrive — even if this laptop is on Google’s list of supported machines. Bringing the Play Store to Chrome OS is a fantastic move that will help fill holes (picture / video editing, working offline, etc.) that have long plagued the platform. The combined ecosystem will be a strong selling point for Chromebooks. But smartphone apps are meant for touching, and that’s just not something you’ll be able to do with the Chromebook 14. Being limited to a keyboard and trackpad when using Android apps sounds like an exercise in frustration. No thanks. And knowing right now that those apps are coming soon ultimately limits the appeal of what Acer’s offering. 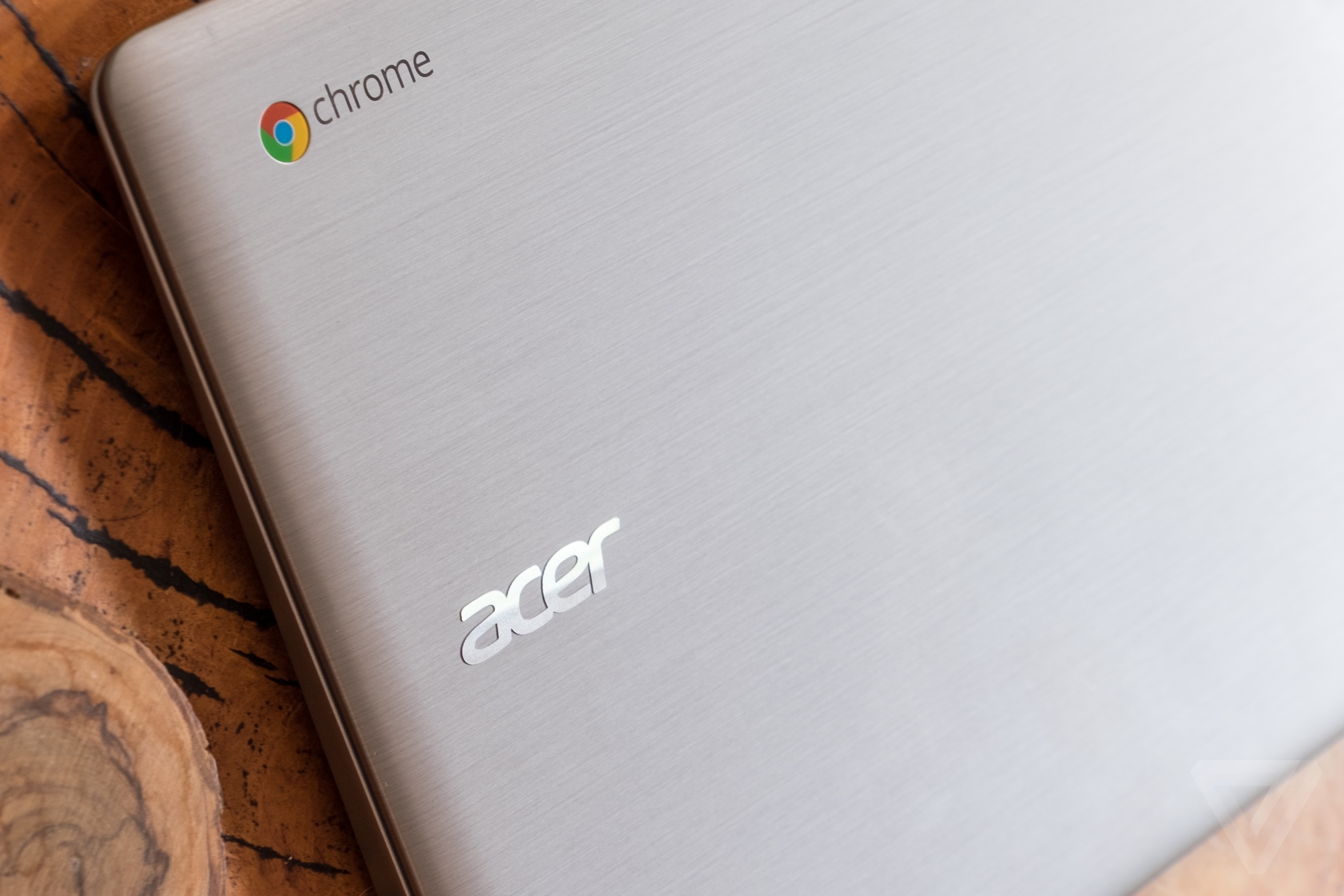 If you’re looking for a Chromebook that’s good at everything Chrome OS has been doing for the last few years, then the Chromebook 14 is a fine choice. Its build quality exceeds what you’d expect from a $300 laptop, with a display that’s among the better ones out there (among Chromebooks). But Chromebooks are about to do more than ever before, and this one isn't ready to take advantage of that.

$269.00 at Amazon
Most Popular
From our sponsor
Advertiser Content From