Valentine’s Day 2017 is a long time from now. For fans who have been eagerly awaiting a new Persona — there hasn’t been a new main entry in the cult RPG series since 2008’s Persona 4 on the PS2 — the next game’s oft-delayed release has been a hard one to bear. Persona 5 will finally hit both the PS3 and PS4 on February 14th (September if you’re lucky enough to live in Japan), which means you’ll have a lot of time to kill before your world is consumed with social links and dungeon crawling.

While there are plenty of great games coming out in the meantime, I have a suggestion for Persona fans: Tokyo Mirage Sessions on the Wii U, which launches today. It takes many of the best parts of the series, and wraps them up in a delicious, candy-coated, J-pop-fueled package.

The fact that Persona and Tokyo Mirage Sessions — or, to use its ridiculous full name, Tokyo Mirage Sessions #FE — are similar shouldn’t be all that surprising. Both games are made by Japanese developer Atlus, and Tokyo Mirage is billed as a mash-up of Shin Megami Tensei, the series that spawned Persona, and Nintendo’s own strategy franchise Fire Emblem. In practice, though, the game is much more in line with Atlus’ offerings than Nintendo’s. (The Fire Emblem elements come in the form of a handful of characters and weapons from the series.)

Like Persona, Tokyo Mirage takes place in modern-day Japan, and puts you in control of a group of high school students fighting to save the world from mysterious forces that live in a shadowy realm. Tokyo Mirage changes things up a bit with a focus on J-pop and the fascinating world of Japanese idols — manufactured pop stars. There’s even a Hatsune Miku-like vocaloid character. The forces attacking Tokyo are sapping humans of their creative energy — eye-rollingly known as "performa" — and the young heroes take on the guise of idols in order to fight back.

The pop theme covers just about every facet of the game, starting with the narrative, where many of the characters are budding idols, trying to make it as famous singers or models. But more than anything, the theme infuses the game with a sugar-coated style. Battle scenes take place in huge stadiums filled with adoring crowds, and the characters wear outlandish outfits that wouldn’t look out of place at a Lady Gaga concert. The beautiful animated cut-scenes, meanwhile, look like psychedelic music videos. Even the menus are pop themed: your fighters are called artists, and when you want to change gear you select the wardrobe option. Perhaps the best addition is the usage of the Wii U Gamepad’s second screen; it serves as your phone, letting you text back and forth with other characters, and navigate maps of both Tokyo and the dungeons you’ll explore. It’s a clever way of adding more story elements and is the best use of the Wii U’s controller since Super Mario Maker.

The pop theme covers just about every facet of the game

Tokyo Mirage has the same basic structure as Persona. The vast majority of the game is spent in dungeons, dark representations of a particular person’s psyche, where you’ll go up against strange creatures in turn-based battles. Aside from the new, glittery coat of paint, the flow of combat will be largely familiar to anyone who has played a Persona or Mega Ten game before — even most of the items, skill, and attack names remain the same. Battles are all about figuring out and exploiting your enemy’s weakness, and in-keeping with the game’s theme, a successful attack in Tokyo Mirage will cause multiple characters to join together in sword-swinging harmony.

The game’s dungeons are less straightforward than most similar titles, with maze-like designs filled with environmental puzzles that force you to think a little bit. When you explore the mind of a famous photographer, for instance, you need to navigate around giant cameras that will zap you back to the beginning of the dungeon. It’s a nice change of pace, and forces you to do more than just mindlessly fight your way to the final boss. The dungeons are also pretty forgiving: there are lots of warp points that let you move around quickly, and you can leave at any time to stock up on items or improve your gear or abilities. 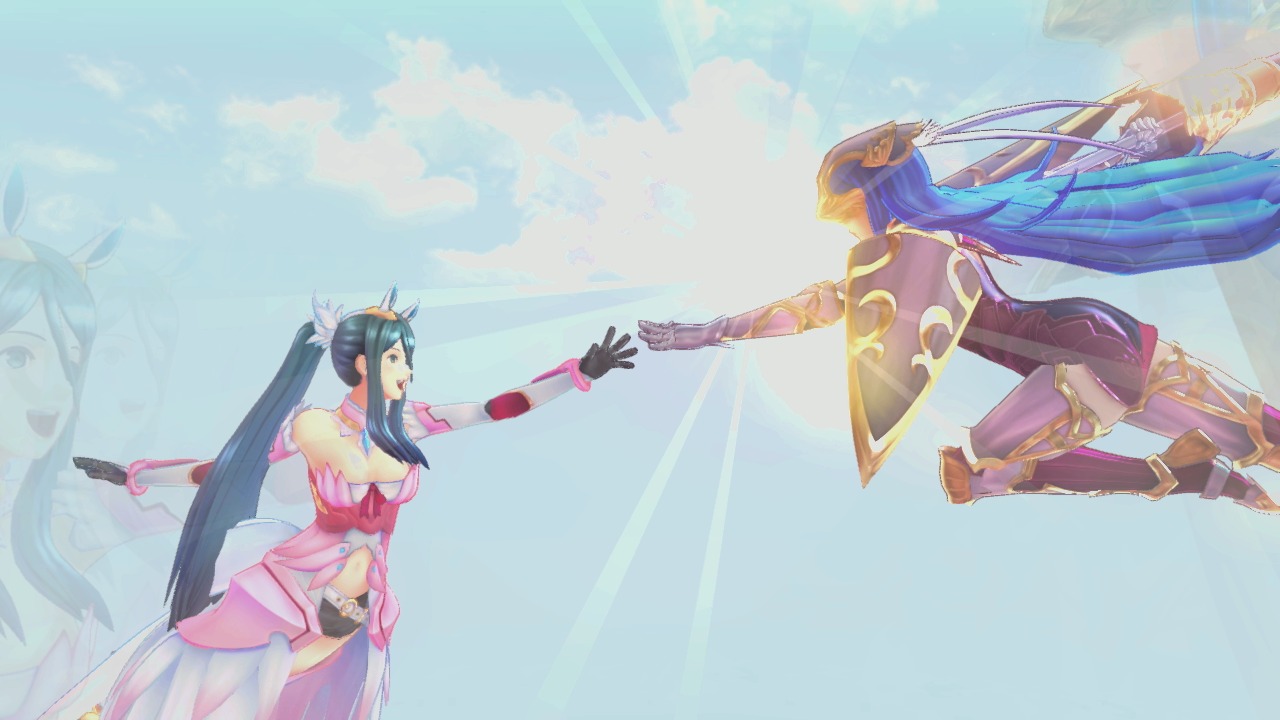 Where the two series differ is the stuff between all of that dungeon crawling. One of Pesona’s defining qualities, and one of the main reasons it's become such a cult hit, is its focus on social interactions. By day you live the life of a regular teenager: going to school, hanging with friends, and navigating those stressful early years of love and loss. These interactions — or social links, as they’re called — then feed back into the more straightforward RPG elements, giving you new powers and skills. The two sides work in tandem. Tokyo Mirage doesn’t have that. There are character focused side-missions to take on, and there are "intermissions" in between the main chapters, where you can explore the city. But it’s all pretty simple stuff, and doesn’t have the same social hooks as a Persona title would.

This makes Tokyo Mirage feel a bit lighter than it otherwise could be. I never felt the same connection to the characters as in games like Persona 4, despite spending many long hours with them. There are a few other minor imperfections, perhaps most notably the game’s ridiculous fascination with overtly sexualized female characters. Often when introducing a new woman the camera will pan uncomfortably across her chest as it bounces. The schtick is shallow and tacky, a rare and unnecessary misstep for an otherwise beautifully stylish game.

All that said, Tokyo Mirage still scratches that particular JRPG itch in a way that few games can. Its blend of the real world and a pop-infused fantasy realm is a lot of fun, and its structure and combat have been tuned just about perfectly. It stands right next to Xenoblade Chronicles X as the best role-playing experience on Nintendo’s console. And for Persona fans, it should keep you busy until February.