This chemtrail petition is hiding something from us

This chemtrail petition is hiding something from us

For better and worse, Change.org is a window into the public consciousness. Though rarely a tool for widespread change, the petition service provides limitless soapboxes for citizens to call for political action and awareness. It can be a cause for good, though its popularity is at odds with the reality the Americans broadly don’t participate in the electoral process — especially in local elections where they can create the most change.

Blame apathy. Blame distrust of the system as it operates today. Blame an online petition being easier than visiting a voting booth. Or blame chemtrails.

"Boycott Marriott Hotels for their new ‘Chemtrail Room’" is an example of Change.org’s application amongst fringe conspiracy theorists and straight-faced pranksters. With 425 supporters at the time of publication, the petition only needs 75 more signatures to achieve its goal. Of course, a boycott doesn’t really require any paperwork; it requires active participation. Whatever the case, a number of people are committed, either seriously or ironically, to this bizarre cause.

"Marriott's newly decorated ‘chemtrail rooms’," begins the petition, "promote chemtrails and geoengineering by making guests grow accustomed to the sight of chemtrails (as if this is a natural occurrence!) This is outrageous and they should not be promoting this government secret agenda. "

What are chemtrails? I’m reminded that 13 months have come and gone since Kylie Jenner asked the world this very question, and never seemed to get the answer she deserved. For those lucky few new to the idea: some conspiracy theorists believe that the condensation trails that follow airplanes are actually chemical or biological agents, and the government has partnered with the air industry for, well, it depends on who you ask. Proletariat brainwashing? Military weapons testing? Avant-garde skywriting?

The hotel artwork in question shows three airplane condensation trails: two running in parallel and another crossing diagonally in the opposite direction. The artwork is pretty benign, until you realize the clouds resemble the the Zodiac Killer ensconced within the Eye of Providence. 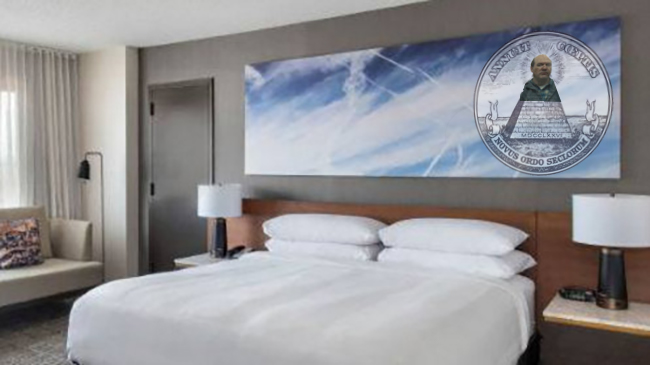 But a closer look reveals an even more important secret message. 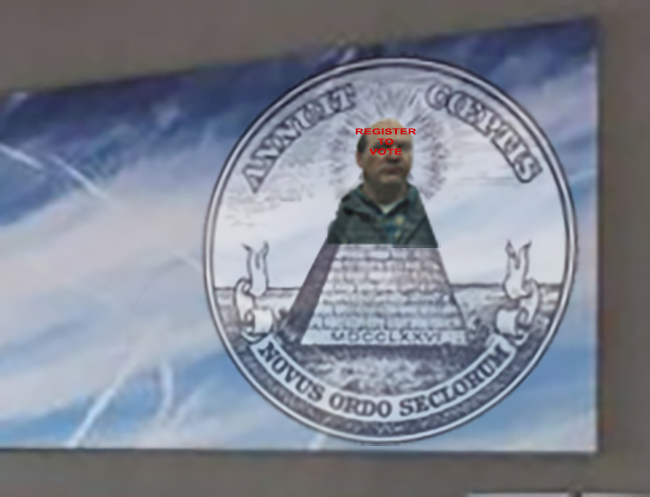 Vote! Because petitions are fun, but actively participating in the democratic process is better.