Huawei MateBook review: this tablet wants to be a PC, but misses the basics

Huawei's got all the pieces, but can it figure out the puzzle?

In the world of tablet computing, there are two camps. There’s the Microsoft Surface (and its clones) camp, which attempts to make hardware that transforms from tablet to laptop and back again. Then there’s Apple’s take, which is to just make its iOS platform powerful enough for productivity without dramatically changing the hardware.

Huawei’s new MateBook straddles the line between those camps. It looks like an iPad, but tries to act like a PC. Its accessories echo Apple’s far more than Microsoft’s, and its fanless, thin design says “tablet” much more than “laptop.”

Looks can be deceiving though, and the MateBook has grander ambitions than just being a tablet for watching movies on a plane. The MateBook, which starts at $699 and goes up to $1,199, runs Windows 10 and has the bones of a full-fledged computer in its svelte frame. It’s powered by a sixth-generation Intel Core chip (similar to what’s in the MacBook and other super-slim laptops) and has an option with 8GB of RAM.

But taking on the iPad and the Surface is a tall order, and while Huawei’s gotten a few things right with the MateBook, it falls woefully short in other, crucial areas. 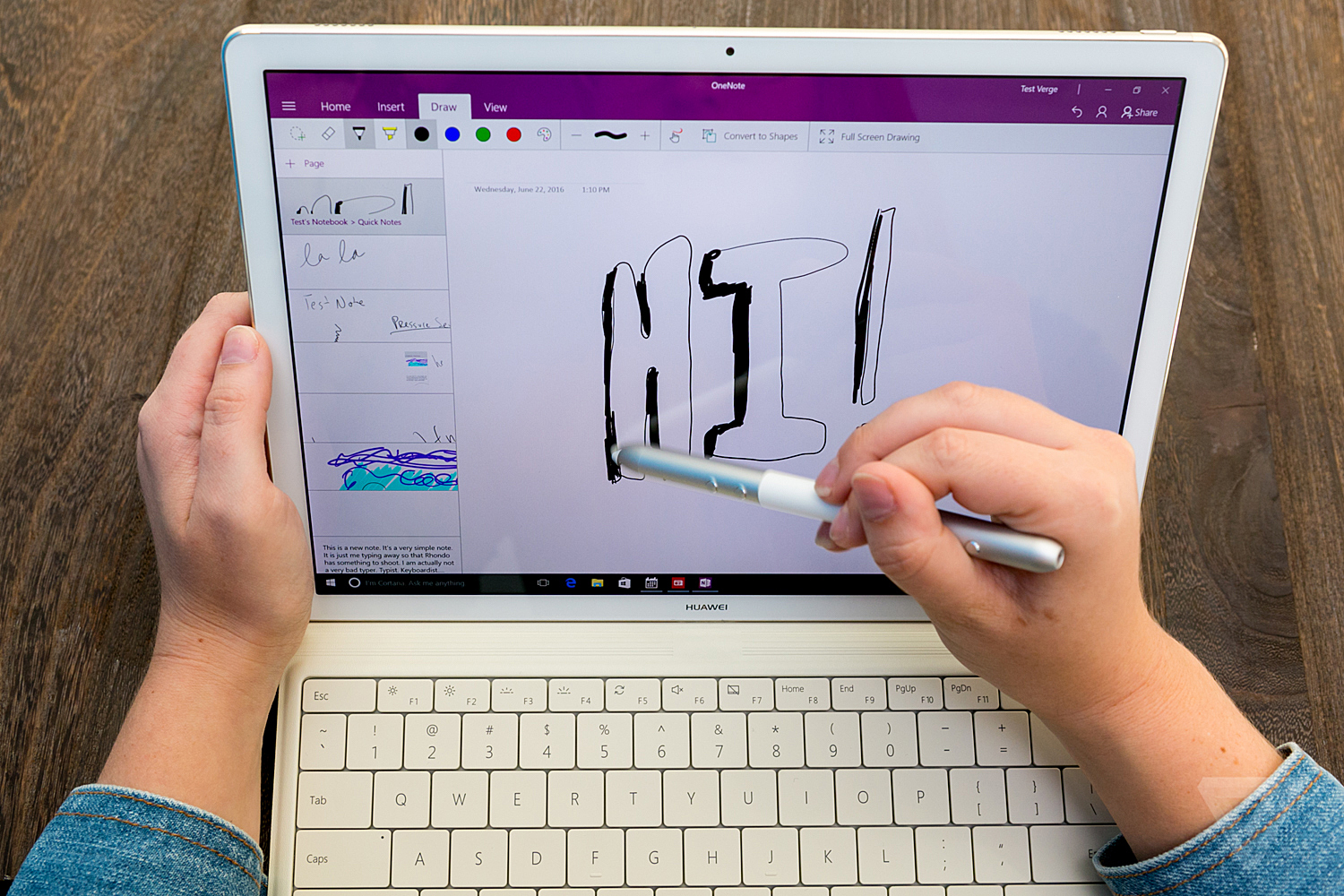 It doesn’t take very long to see where Huawei got its inspiration for the MateBook’s look. The white front, gold finish (a silver model will also be available), and rounded corners all echo the iPad Pro’s design. It may be derivative, but the MateBook is an attractive device and the fit and finish are top notch. 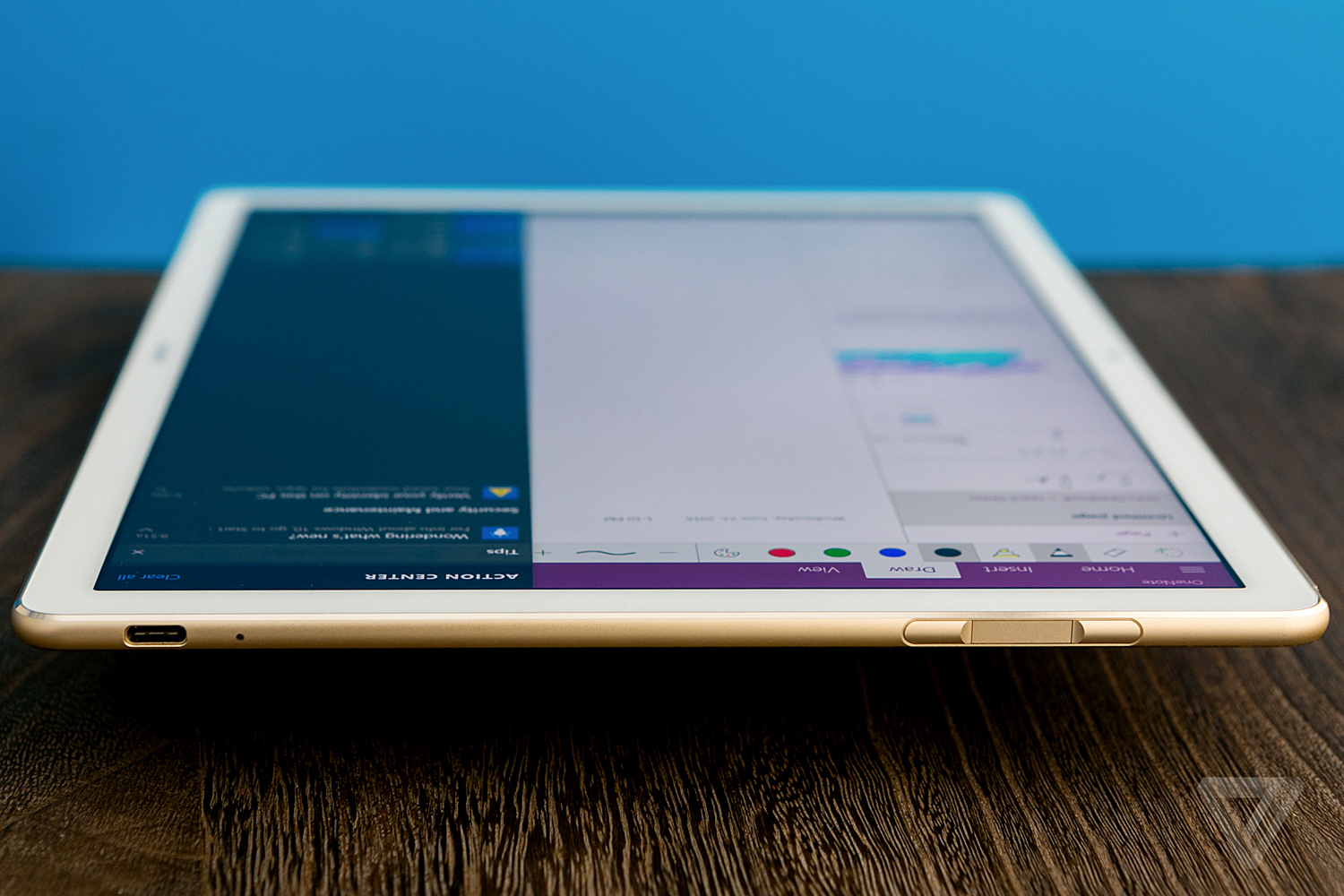 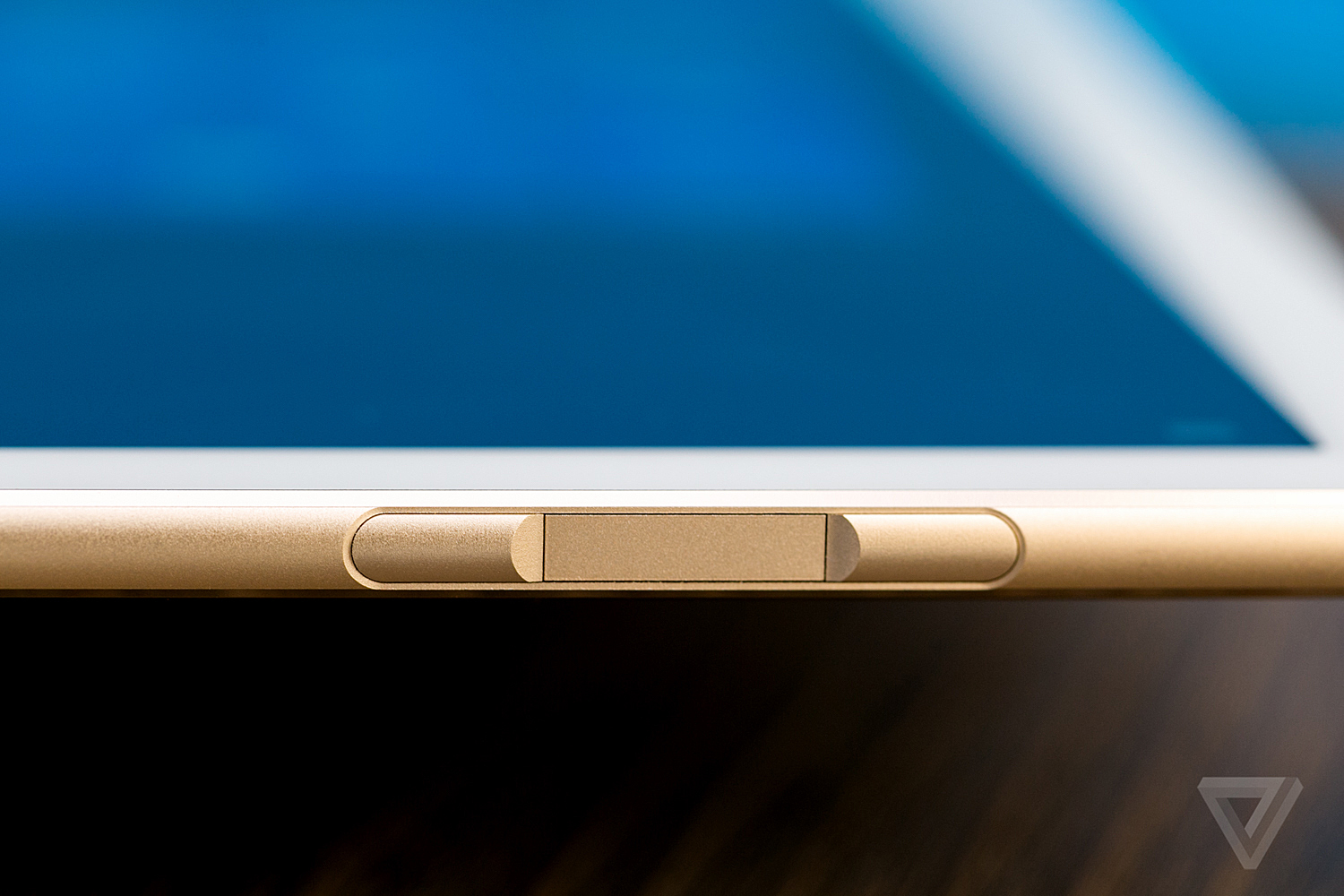 The MateBook matches the iPad Pro on thickness (6.9mm) and is slightly lighter at 640g (about 1.4lbs), though it does have a slightly smaller screen. It’s very portable and easy to slip in a bag, but it’s not the kind of tablet that I can comfortably hold in one hand for long periods of time. The 12-inch, 3:2 display is clearly designed to be used in landscape orientation, where it’s great for watching video or using with a keyboard. But it’s awkward in portrait, making it difficult to use for laid-back reading.

The display is excellent in other respects, however. The 2160 x 1440 pixel resolution provides a sharp image, and the colors are punchy and bright. The screen gets bright enough to use outdoors, but it’s a bit more reflective and has more glare than I’d like to see.

Along the right edge of the tablet is a fingerprint scanner set between the volume buttons. It’s the same kind of super fast and accurate fingerprint scanner Huawei uses on phones such as the Nexus 6P and it works splendidly for logging in to Windows. A single touch will wake the display and log in, just like you’re used to on a smartphone. It’d be even more useful if I could authenticate other logins, such as websites and apps with it, but that feature isn’t yet supported in Windows 10. Along the same edge is the MateBook’s lone data connection: a USB Type-C port that is used for both power and connecting to external devices.

Flip the tablet over and you are greeted with a smooth, metal finish marred only by cheesy stickers advertising Intel and Microsoft’s roles in the device. You won’t find a camera — the MateBook only comes equipped with a front-facing camera — which seems like an odd omission for a premium tablet in 2016. Either way, you won’t be dodging people taking pictures with MateBooks at any amusement parks or outdoor concerts this summer, so perhaps it’s a blessing. 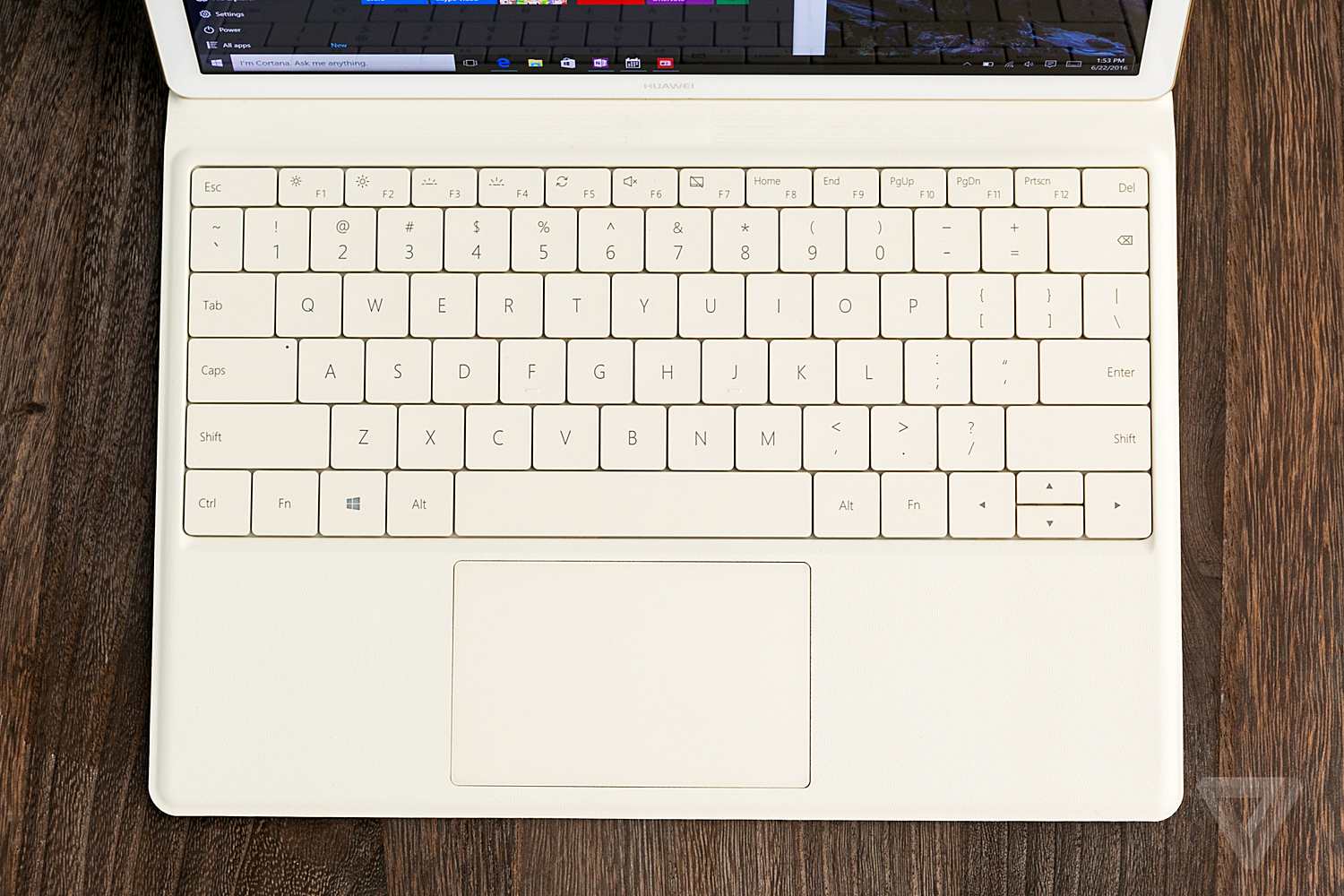 A productivity focused tablet is only as good as the keyboard that you can get for it, and Huawei is selling a $129 folio-style keyboard case to go along with the MateBook. It has some promising features: a large, backlit keyboard; spacious and smooth trackpad; attractive look (it looks like leather, but it’s plastic, which is a little bit of a letdown); and a spill-resistant metal oxide frame. It attaches to the MateBook via a pogo pin connection on the bottom edge of the tablet and uses a similar folding origami system to Apple’s Smart Keyboard to prop the tablet up. The tablet doesn’t have a built-in, infinitely variable kickstand like the Surface, but the case is designed to support two different angles. 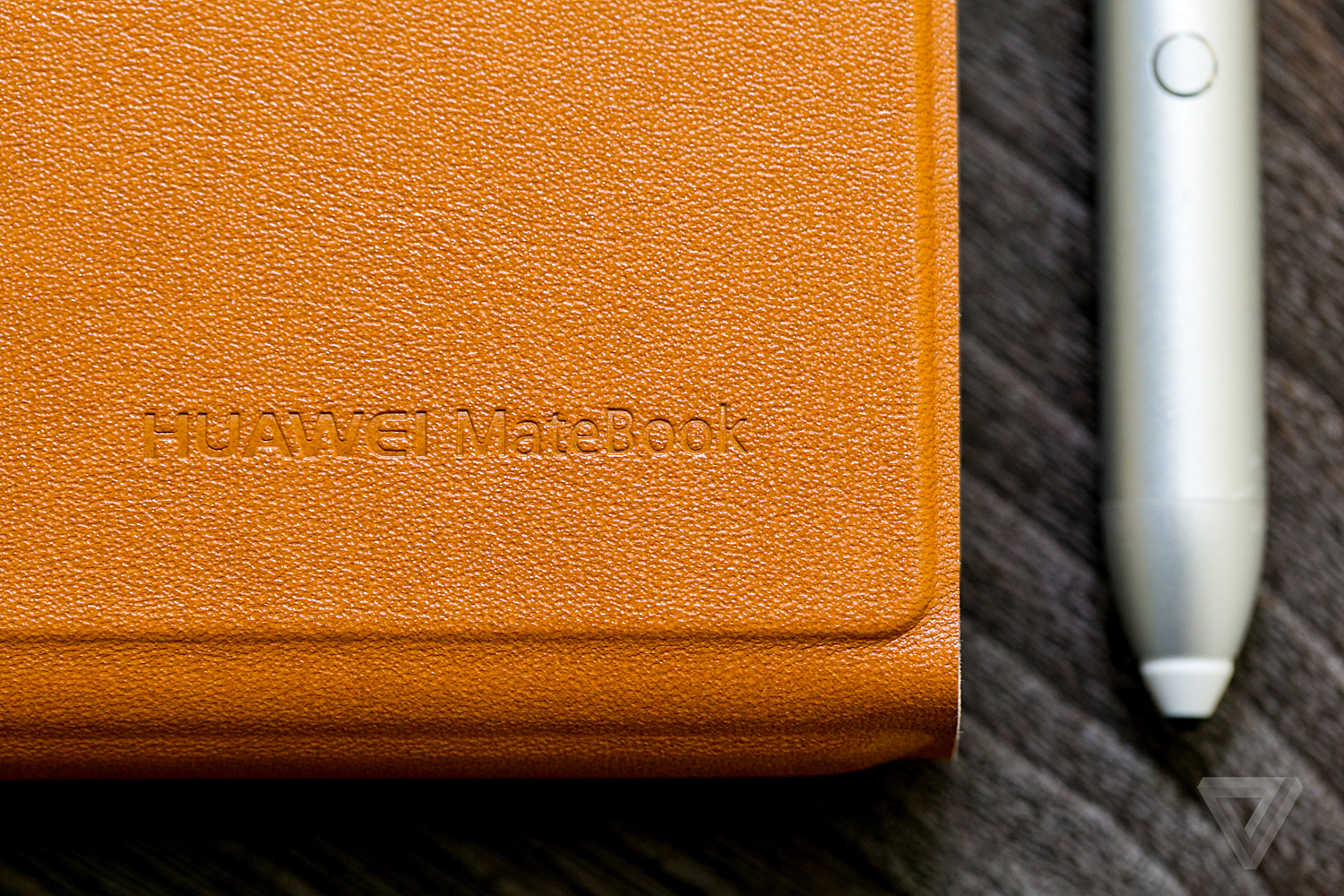 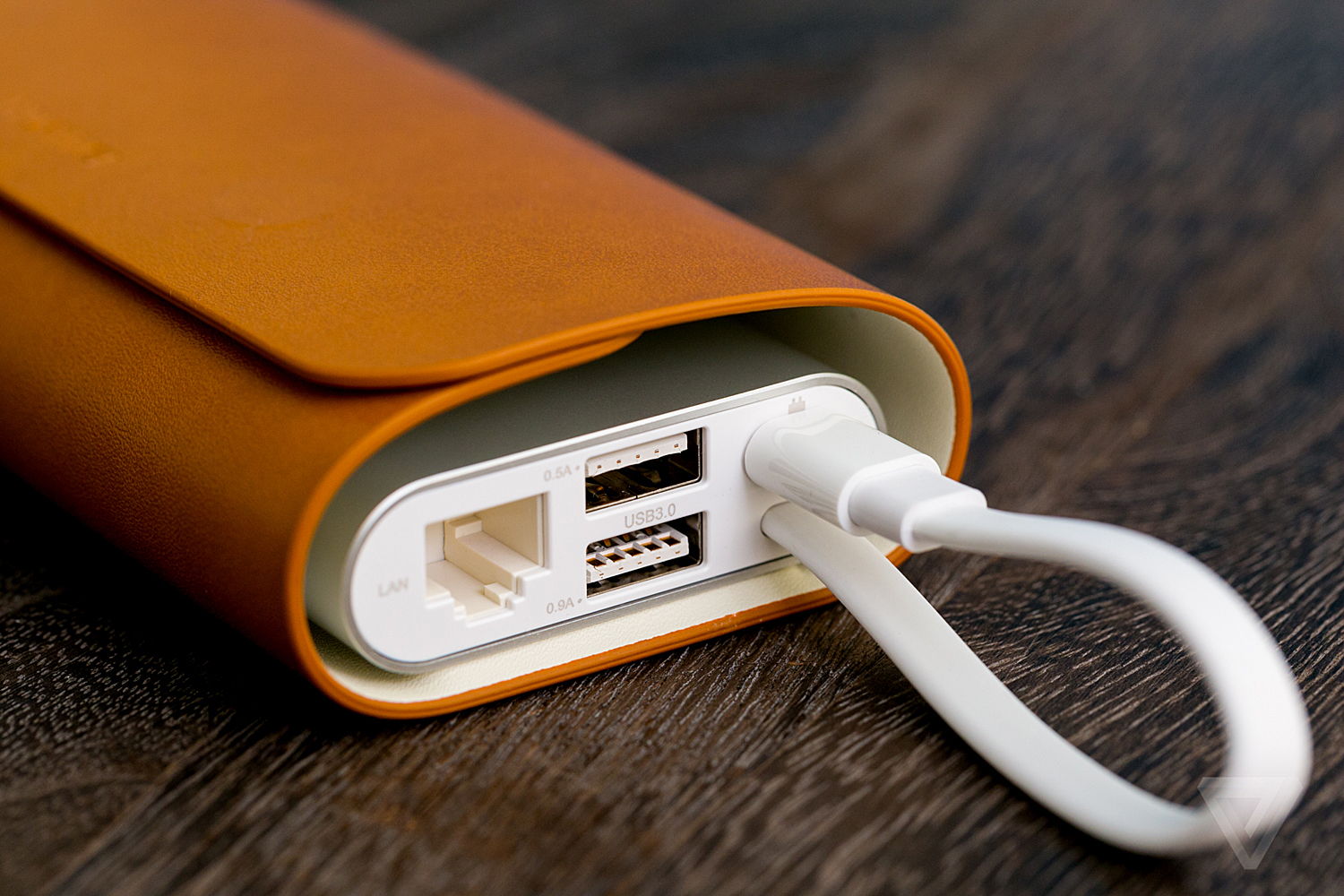 The MateBook Keyboard is easy enough to type on after a few minutes of adjustment, and the trackpad works surprisingly well. But beyond that, the design is seriously flawed, especially if you hope to use it on your lap or while traveling. The magnets in the case aren’t strong enough to hold the tablet in place while it’s on my lap and the whole thing feels very precarious in use. I used the MateBook on my train commute and on more than one occasion, a slight bump in the ride caused the tablet to dislodge from the case and skate towards my feet. The setup is only stable on a fixed table or desk, which greatly limits the portability of your productivity.

In addition to the keyboard, Huawei is selling a Bluetooth stylus ($59) and USB C dock ($89) to go with the MateBook. The MatePen is rechargeable (over microUSB, not USB C), lasts for 100 hours of use, and has 2,048 levels of pressure sensitivity. It also has a built-in laser pointer for presentations or tormenting your cat. (I used it to torment my coworker Chris Ziegler, as I do not have a cat.)

The MateDock has a clever design with a wrapping cover that matches the keyboard case and provides storage for the MatePen. It has two full-size USB ports and an Ethernet jack on one side and HDMI and VGA ports on the other. The MateDock was designed to be taken along with the MateBook wherever you go (as opposed to docking stations of other tablets that are meant to remain on your desk) and it has the same smooth metal finish as the tablet. It’s something that you’ll probably want to purchase (in addition to the keyboard) if you buy a MateBook. 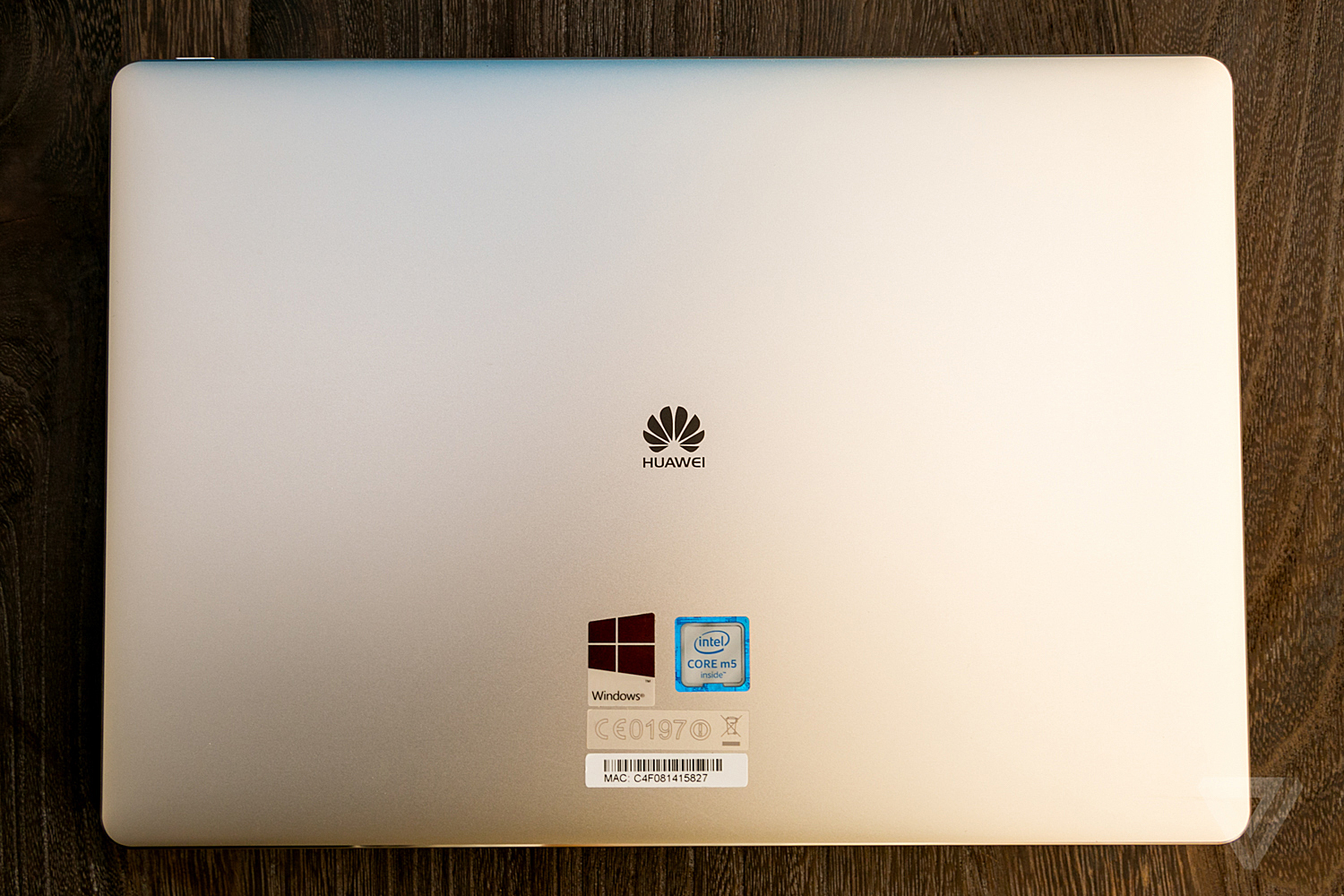 As I noted at the outset, the MateBook has ambitions of being a full-fledged PC, and it has the internal specs to back up that effort. The entry level model comes with a Core m3 chip and a paltry 4GB of RAM, but the unit I’ve been testing has the more powerful Core m5 processor, a more respectable 8GB of RAM, and 256GB of storage (which is oddly partitioned into two drives by default). It sells for $999 and is the bare minimum I’d recommend if you’re considering the MateBook. Huawei unfortunately isn’t offering an option for LTE connectivity on the MateBook, which is something that makes an ultraportable computer that much more useful on the go.

With the specs it does have, the MateBook’s performance is more than respectable for everyday productivity tasks. It can handle many browser tabs without needing to kick them out of memory (unlike Samsung’s TabPro S, which is hamstrung by its 4GB of RAM), can juggle multitasking between apps with ease, and can even push an external display (via the HDMI port on the MateDock) without struggling. I was able to run Photoshop on it without issue, though it obviously couldn’t process images as fast as a more powerful dedicated laptop.

But all of that power comes at a cost and and in the case of the MateBook, that cost is heat and battery life. The MateBook doesn’t have a fan, so it runs silently, but the back of the tablet gets especially warm during use.

The bigger problem is the MateBook’s battery life, or lack thereof. Huawei claims that the device has "enough power on a single charge for typical usage of a full day," but unless your day starts at 9AM and ends at noon, I don’t see how the MateBook would work. I found myself hitting less than ten percent of battery life in as little as 3 hours when I’d use the MateBook as a PC — browsing the web, using various apps, switching between virtual desktops, etc. Lowering the brightness and switching between Chrome and Microsoft’s Edge browser did not have an appreciable effect on battery life. In our standard rundown test, the MateBook quit after 4 hours and 26 minutes, which is significantly less than similarly priced and specced devices. The MateBook also had trouble charging its battery and running an external display at the same time via the MateDock.

The main attraction of productivity tablets is the ability to get work done on the go, but I could never trust the MateBook to last long enough to rely on it. Put bluntly, the battery life on the MateBook is so bad that you should not buy it for this reason alone. 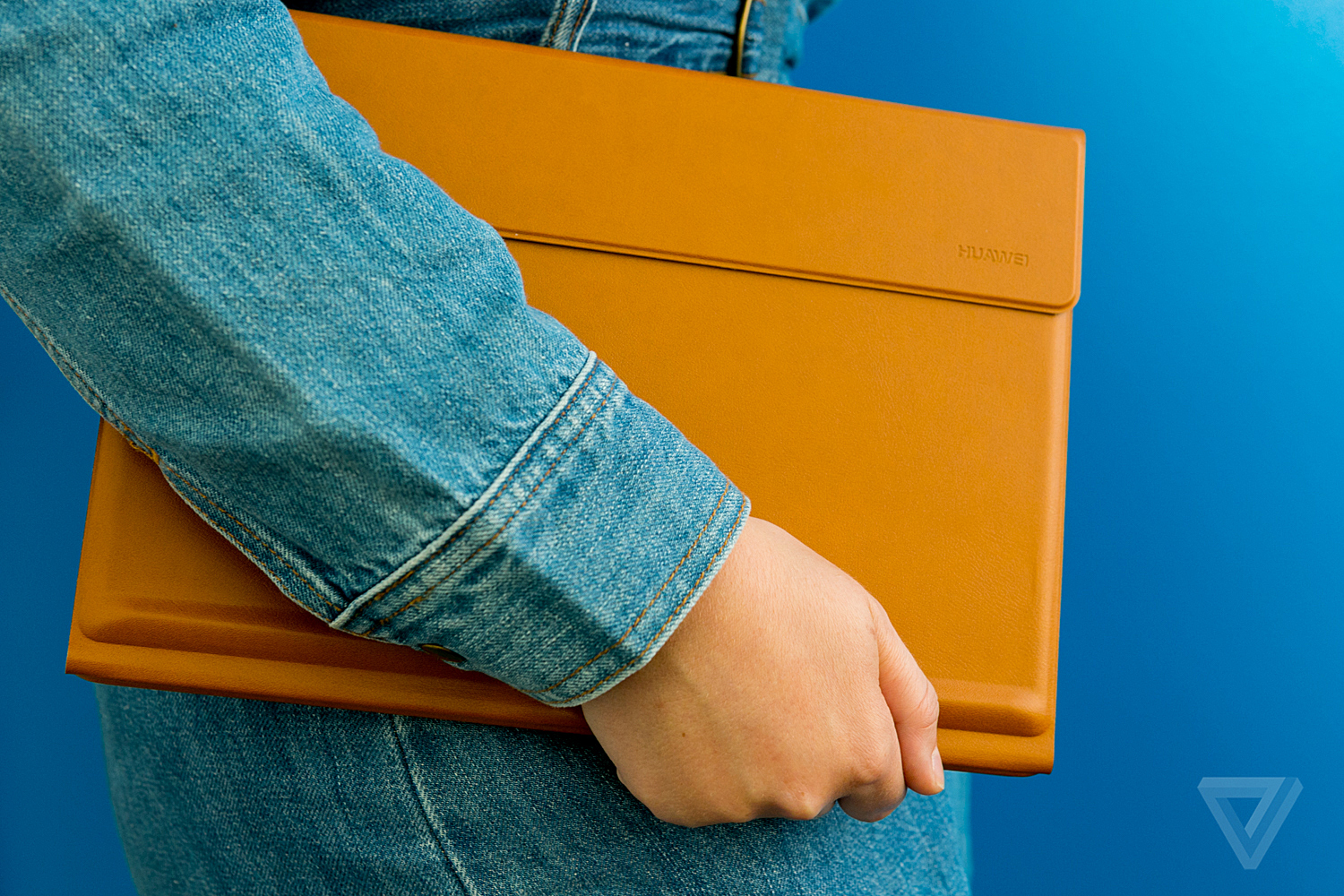 The MateBook has a number of things going for it — sleek design, nice display, fast performance — but it misses so wildly on other things that I find it hard to recommend it to anyone. It’s an expensive tablet, especially when you add in the hardly-optional keyboard and dock accessories, and its flaws make it very hard to justify that cost.

If you’re looking for a Windows 10 productivity tablet, the Surface Pro 4 is a much better option than the MateBook. Samsung’s TabPro S is another good option if you have a tighter budget. And if you’re not married to Windows, Apple’s iPad Pro is an excellent choice that offers LTE connectivity at a similar price to the higher-end MateBooks.

This is Huawei’s first attempt at this kind of tablet computer, and it’s possible that the next version will fix the flaws in design and battery life. Huawei’s had a history of copying others before figuring out how to do things its own way, and that may be what happens with its tablet efforts. But for now, the MateBook feels like a work in progress, and you shouldn’t be a beta tester for an unfinished product.