Coming to AT&T on June 10th

Samsung's Galaxy S7 is a terrific smartphone, but it's not a particularly durable one. It's waterproof, yes, so you can use it in the rain and not blink an eye if it happens to take a dive in a shallow pool. But the for hamfisted among us, the glass-heavy design still demands some kind of case. Instead of just have you buy some ruggedized case for the sleek S7, Samsung and AT&T now have an entirely different phone for you to consider: enter the Galaxy S7 Active. It goes on sale on June 10th for $26.50 per month over 30 months, or $33.13 for 24 months; both of those work out to around $795.

This is the fourth year in a row where Samsung has built a bigger, stronger, and uglier version of its flagship Galaxy smartphone for AT&T. The move made a ton of sense last year, when the Galaxy S6's flashy redesign didn't offer any kind of water resistance. That gave the Active an easy and standout selling point. This year Samsung's regular S7 has learned to swim again, though, so how can Samsung and AT&T lure people towards the Active model? 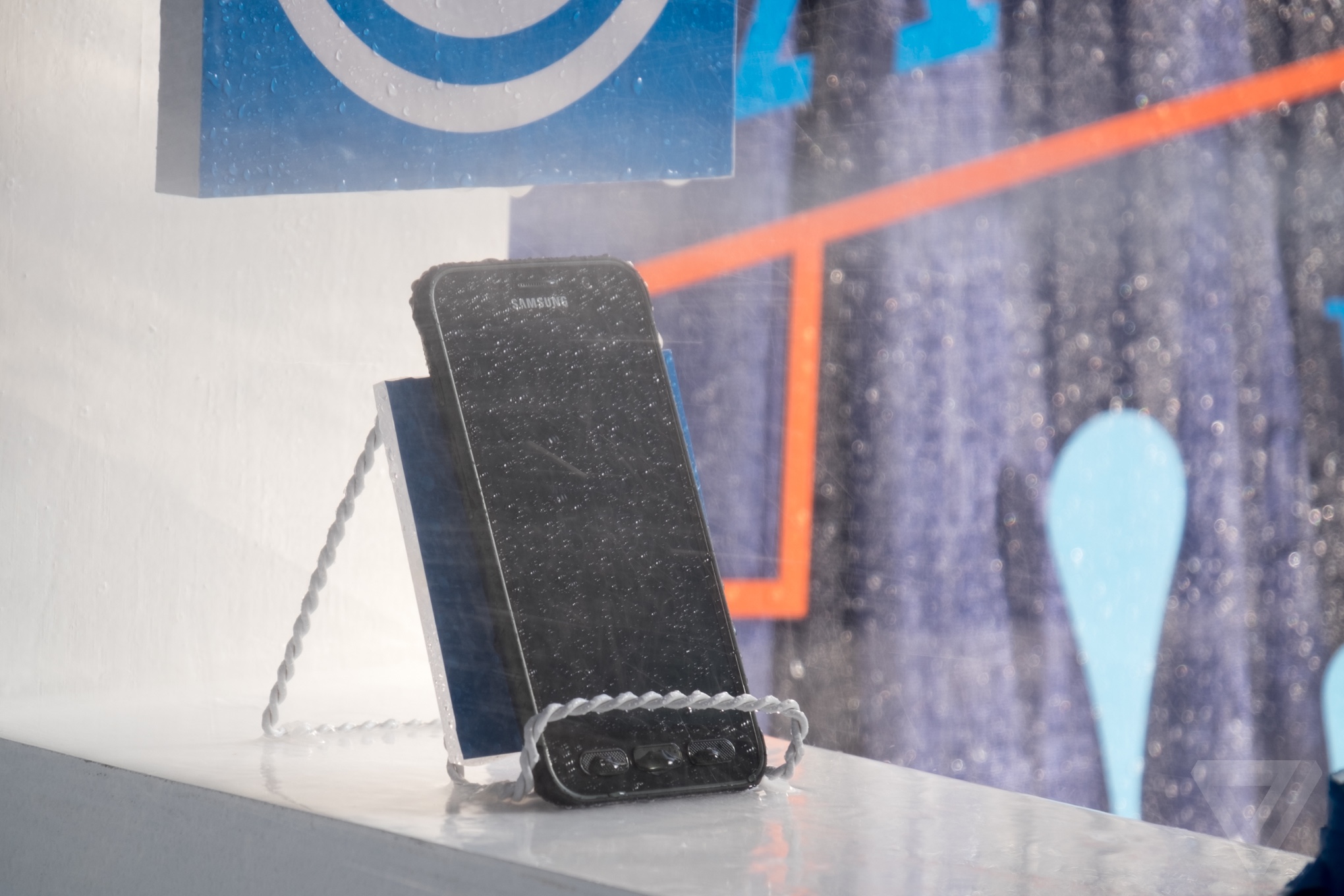 It probably won't be looks. The S7 Active is styled pretty closely to last year's version, so it's noticeably taller and wider than the regular S7 despite the screen size going unchanged. And, well, it doesn't look anywhere near as nice. The S6 Active's tacky visible screws are gone, which is a plus, and the pattern that Samsung chose for the back casing feels rather nice in hand. Same goes for the metal sides and soft-touch bumpers on the corners, which actually make this way more comfortable to hold as a camera than the everyday S7.

Counting the home button (yes, with a speedy fingerprint reader), there are three physical buttons on the front of this phone. That takes some getting used to if you've been using on-screen or capacitive buttons for awhile. Another important tidbit for virtual reality fans: owing to the Active's different measurements, a Samsung spokesperson made no promises that it would work inside the current Gear VR headset.

The S7 Active no doubt takes a hit in the looks department compared to Samsung's flagship. That's particularly true of the hideous camouflage color that I've been using, which feels like it's meant for plotting bombing runs or calling in the cavalry or something. I check email and send snaps on this thing, Samsung. Maybe dial it back a bit. You should buy the black or gold option instead. Both of those look just fine by my eyes if you're into the industrial look.

The back might not be glass, but it won't shatter when you drop it

And depending on how clumsy you are (or how much you hate putting a case on your smartphone), the Active might make up for its lackluster looks with toughness. Samsung says the new Active can withstand drops from up to 5 feet — even when the screen is the first thing crashing to the ground. Above the QHD Super AMOLED display and Gorilla Glass 4 is an added layer of polycarbonate, which is an added precaution to help keep the screen from shattering. If there are any downfalls to this approach, I didn't notice them. The S7 Active hasn't picked up an abnormal amount of scratches in my time testing it — and I get obsessive about that stuff — and the display looks just as crisp and gets just as bright as the S7's.

Samsung tested the S7 Active's rugged build numerous times at a launch event last week, dropping it on the floor, sand, and into water. As you'll see in the photos below, it's definitely possible for the thing to get dinged up and show some battle scars, but at least the screen was fine.There are even little bumpers around the camera's glass to protect it against cracks. 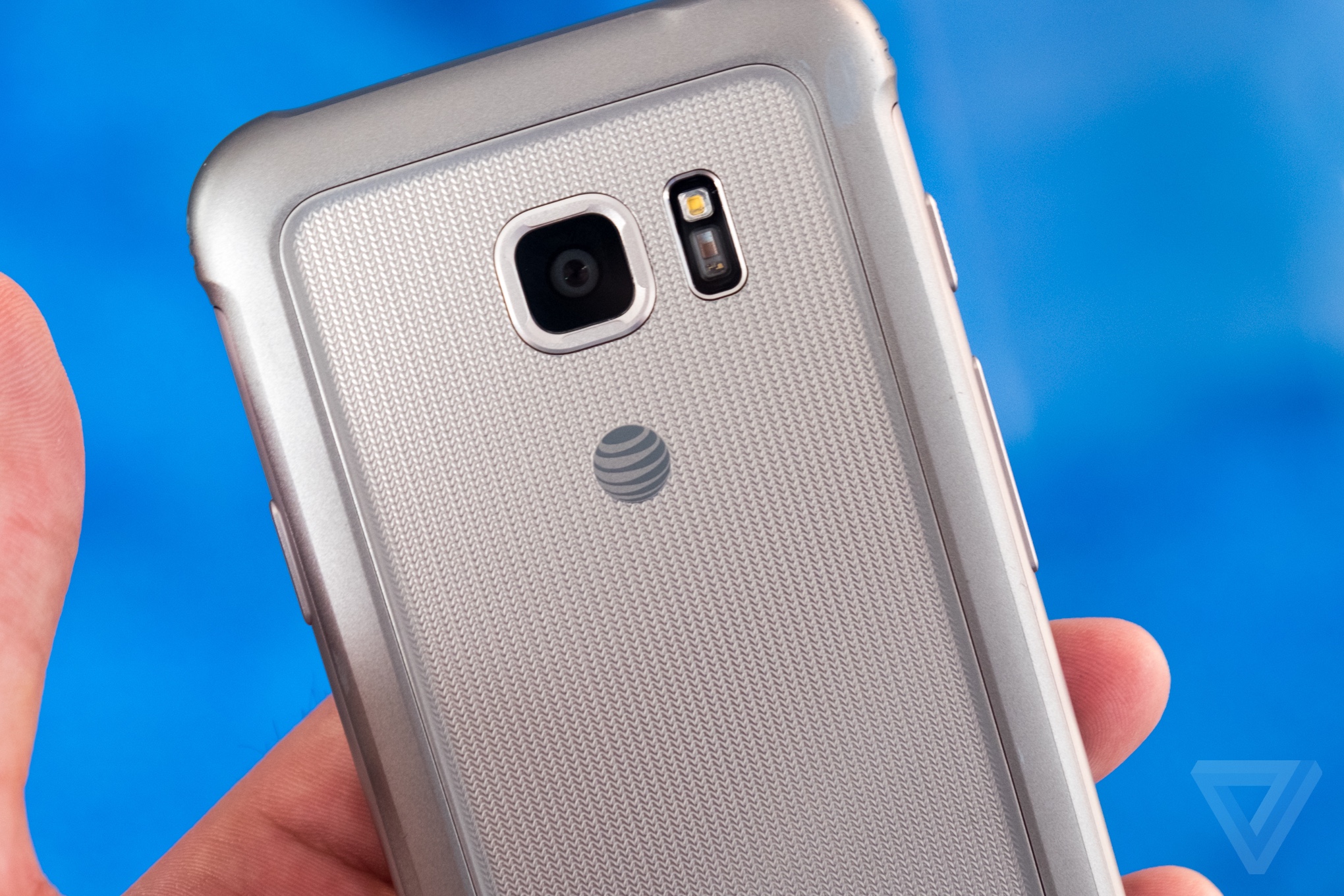 Everything inside is mostly the same. The S7 Active has the same blazing fast Snapdragon 820 processor, 4GB of RAM, and tremendous 12-megapixel camera as its non-rugged sibling. And by all accounts, the S7 is still holding up just as well today as when it launched, so that's all good. You're still limited to 32GB of built-in storage, but there's a microSD slot in case you need more. Samsung Pay works just fine, too, if you've got a compatible credit/debit card and want to leave your wallet home.

It's the battery that sees the other big change here. Samsung has upsized the capacity to a massive 4,000mAh. That's even bigger than what's inside the S7 Edge, or pretty much any other phone you'd buy from a US carrier today. As you might guess, a huge battery pack and 5.1-inch display (even at this sharpness) produce some stellar longevity. I never had to worry about charging the S7 Active during days of moderate to heavy usage, but you'll want to plug it in come bedtime — just like any other phone. Just remember that all of that extra battery is probably contributing to the S7 Active's larger dimensions. It's not quite the same thing as shoving an enormous battery in the S7's efficient frame.

One thing I've really come to love about the S7 Active is the dedicated shortcut button on the left side, right above the volume. Samsung's home button shortcut for opening the camera remains lightning quick, so you don't need a separate button for that. But having a physical control that opens any app you want is pretty fantastic. I've got it set so pressing the button opens Twitter, holding it down opens Facebook, and a double-press launches Spotify. All of this works with the phone locked; you'll just have to enter your PIN or unlock it with a fingerprint before getting into the apps you've chosen. It's a super convenient thing that I wish existed on the regular S7. 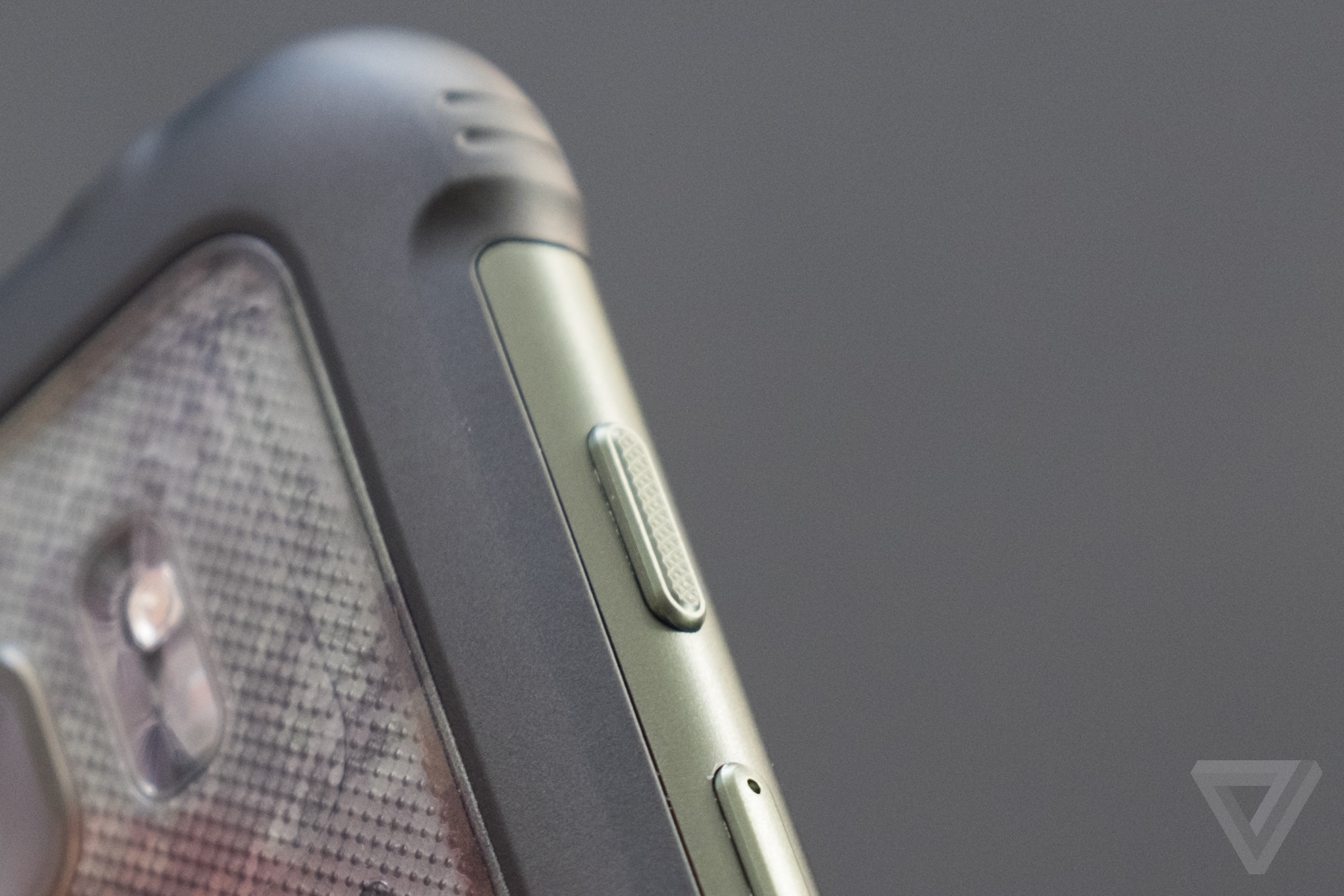 I think people who would buy the S7 Active already know they need a smartphone exactly like it. Maybe your job calls for having a phone that can take some abuse, or you're just a person who drops stuff all the time. Sure, you could buy a regular Galaxy S7 and toss an Otterbox case on it. That more or less gets you something close to equal. But if you can get beyond the camouflage and carrying around something that isn't quite as nice as Samsung's metal and glass flagship, the S7 Active — and its gigantic battery — could be worth a look. Now let's see whether Samsung finally takes it elsewhere.