He is in fact alive and well

The NFL's Twitter account was hacked this morning, and the attacker used it post erroneous tweets claiming the league's commissioner, Roger Goodell, had died. The organization was able to scrub the tweet five minutes later, but not before thousands of retweets had spread it far and wide.

Ten minutes after the first false tweet, NFL PR rep Brian McCarthy acknowledged the hack on his own personal account and shot down the Goodell claim, saying the commissioner was "alive and well." 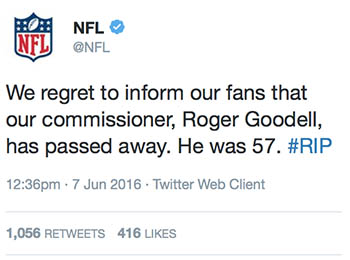 In what appears to be some kind of social media power struggle, the attacker was able to continue posting tweets before the NFL's PR squad wrestled control back and restored the feed to normalcy. You can imagine it's not going to be a very fun morning for those employees tasked with handling the damage control here.