Drink lots of water. Keep going to yoga. Use your standing desk more often. We know these habits are good for our health, but for a long time now, one practice has proven to help us actually lose weight: weighing ourselves.

I know, I know. It’s really annoying. And it can be disheartening to step on a scale first thing every morning only to see three numbers blinking at you as if to say, "You’re still heavier than you want to be!" I can think of better ways to start the day, like making myself a waffle loaded with syrup and butter. Yet, the evidence is real— stepping on the scale makes people more aware of their weight and whether or not they’re meeting their goals.

Today, Withings introduced two new scales that might help: the $129.95 Body and $179.95 Body Cardio. They’re both health-tracking, weirdly high-tech scales that sync with an app and give you way more information than you’ve ever seen on a scale, from your heart rate to the weather. But the real standout is the Body Cardio, which tracks your Pulse Wave Velocity. This measures how quickly your heartbeat vibrations spread through your arteries, and it’s widely recognized by the medical community as an indicator of your cardiac health. Faster PWV indicates high blood pressure, stiff arteries, and a risk of hypertension. 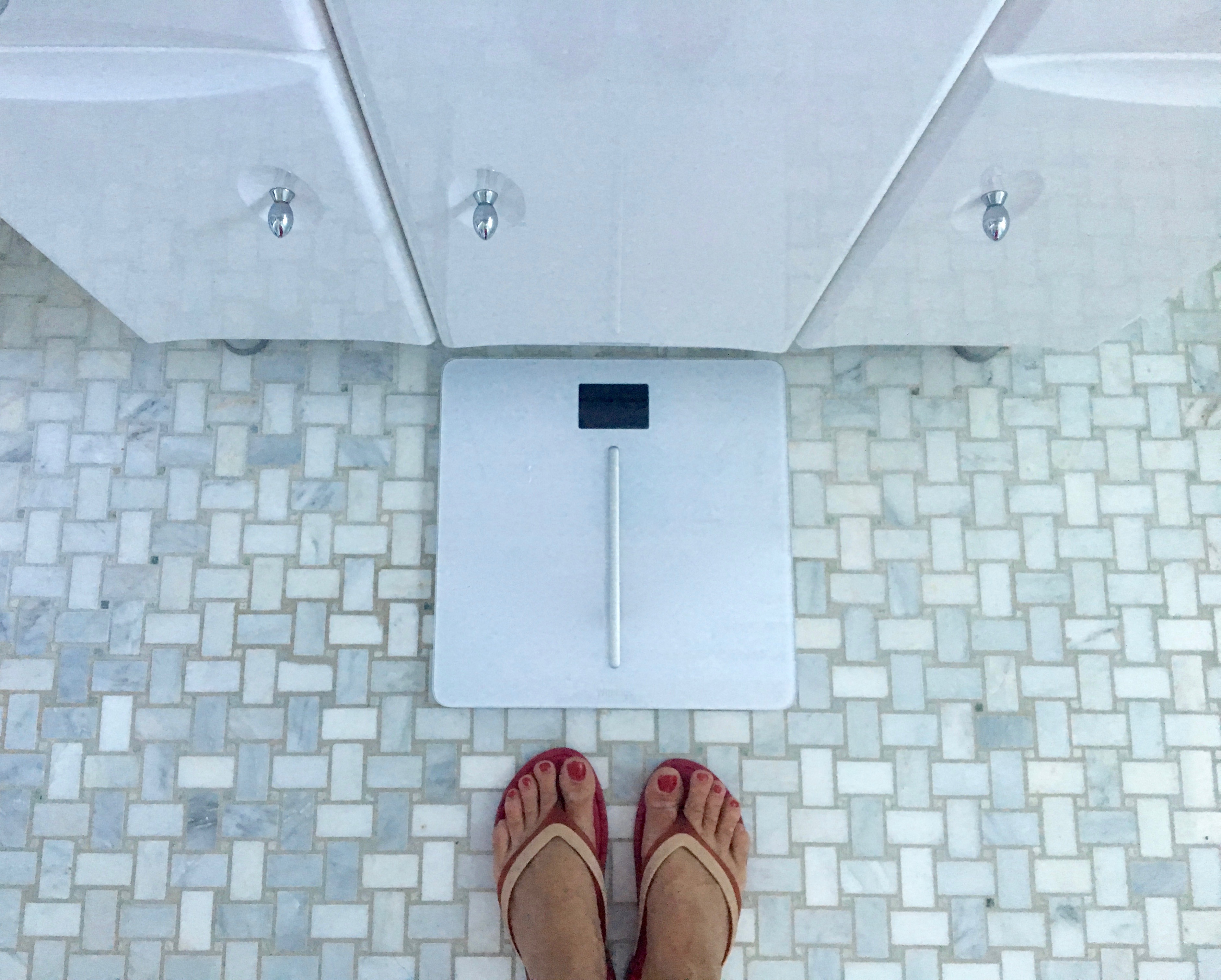 I’ve been using the Withings Body Cardio for the past week and, while I could stand to lose a few pounds, I’m relieved to say that my PWV is steadily tracking in the Normal range. If you have high blood pressure or your family history puts you at risk for more heart problems than the average person, a scale like this one could give you a useful snapshot of your health. If not, you might consider the Body scale, which, while still a bit pricey, costs $50 less than the Body Cardio and doesn’t measure your PWV.

Lots of people rely on fitness trackers to help them lose weight, but they often weigh themselves using a separate scale that’s not connected to their fitness tracking app. These Withings scales help people skip the step of manually entering weight and a lot of other data. While that might seem like a small point, it could really ease the process of health tracking.

Withings, which was just acquired by Nokia, makes a variety of health-related devices including its latest Withings Go fitness tracker, which shows you basic activity data on an E Ink screen. The company is also no stranger to connected scales. Back in 2009, Withings introduced the Smart Body Analyzer scale, then in 2013, it brought out a simplified version of that called the Wi-Fi Body Scale. The two new scales (Body and Body Cardio) replace those older scales, which won’t be sold any more. 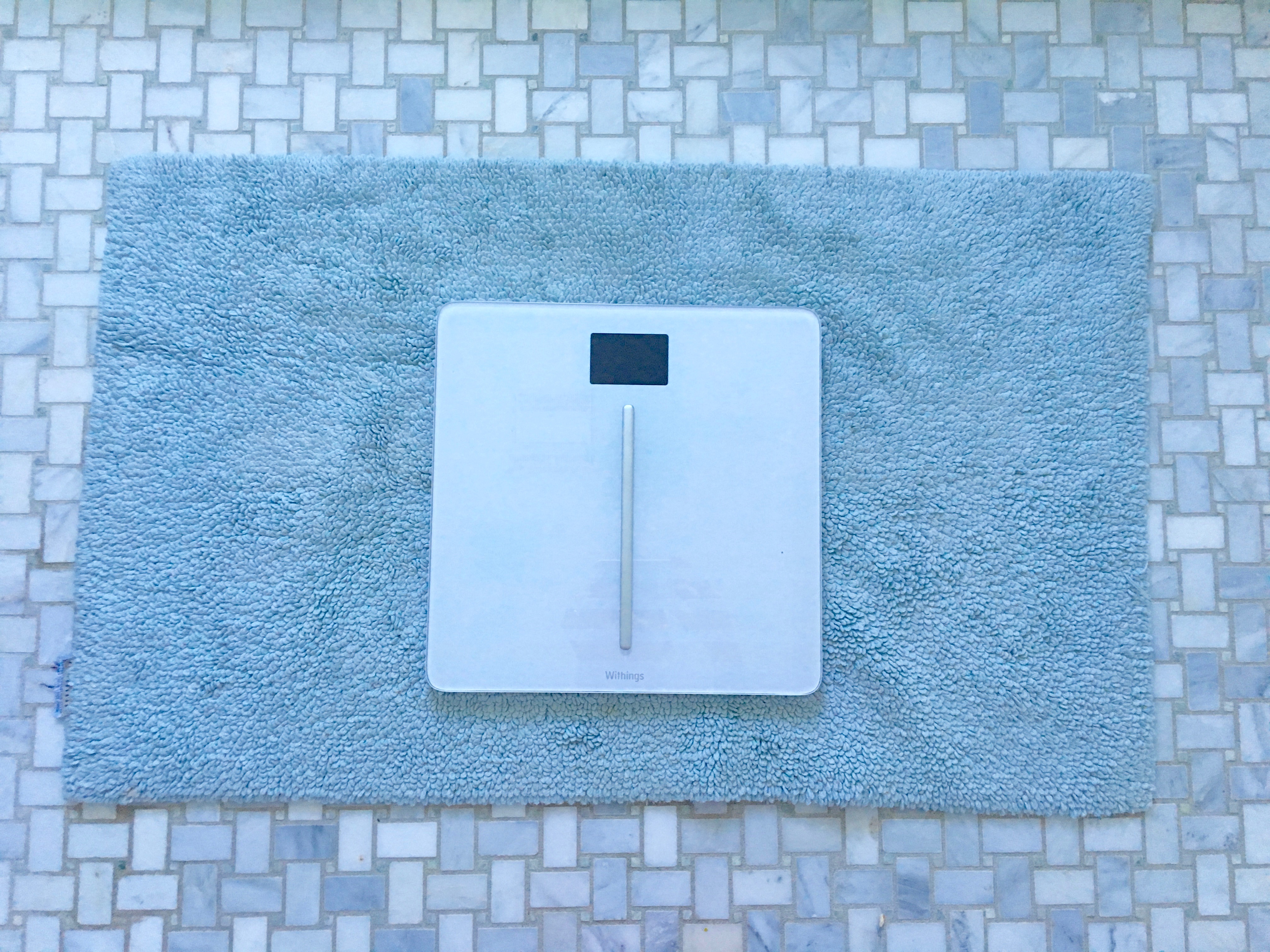 The Body and Body Cardio use a corresponding app — the Withings Health Mate — that runs on iOS and Android, and it automatically stores all of the data from your scale every time you step on. If that was all the app did, you’d be left with a lot of data and not much knowledge of how to do anything about it. So Withings added some coaching. This lets you set goals for things, like losing five pounds at a pace of a pound a week. The main screen of the app gives you a snapshot of everything, but tapping on a specific thing shows you details on that data point. This helped me understand what was being measured and why.

But first, the superficial question: how will this scale look in your bathroom? The Withings Body Cardio is sleek — much more sophisticated than the old digital one that has been stuffed under my bathroom sink for, umm, a while. It comes in white or black, and its surface is made of a high-strength, tempered glass. It’s roughly 13 inches square, so will be large enough for most feet, and it’s impressively thin at just 0.7 inch. 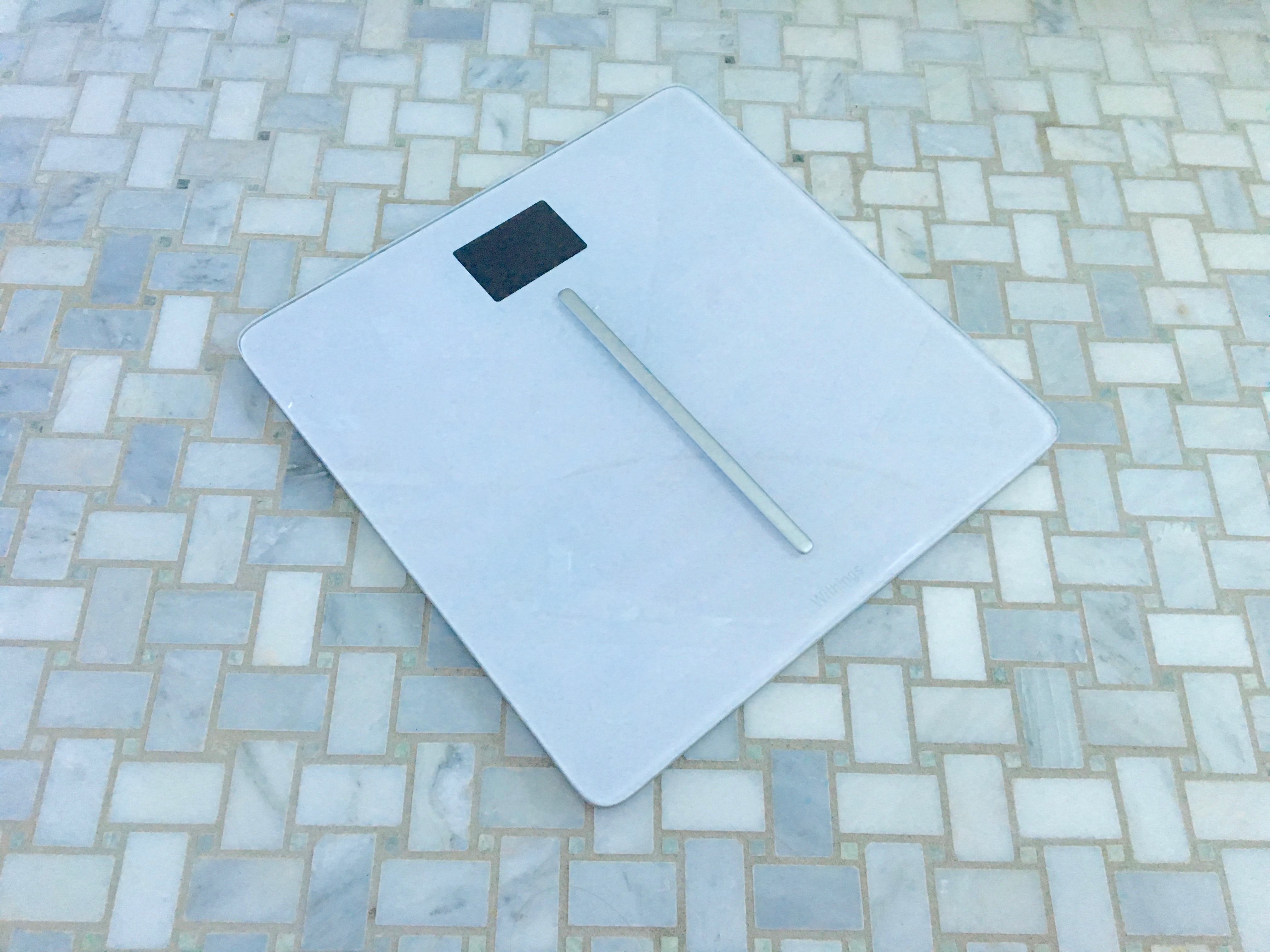 When you first set up the Body Cardio, you’ll be prompted to download its Health Mate app. Pressing a small button on the scale’s right side will connect it with your phone using Bluetooth and your Wi-Fi network. The first time you step on the scale, your weight shows up in the center of the display. If you see blinking triangles in any corner of the display, that’s the scale’s way of telling you to center yourself and lean away from those corners to get a more balanced, accurate measurement.

After measuring your weight, the Body Cardio cycles through other data: a trend line of your weight loss or gain, fat and water percentages, today’s weather, standing heart rate, bone and muscle percentages, and the number of steps you took the previous day (step-counting can be turned on or off in the app).

So where’s this all-important PWV heart-health stat? It only shows up in the app and, in my experience, isn’t measured every single time. If that happens, the app tells you ("no Pulse Wave Velocity data collected") and suggests how you might have better luck next time, like standing as stable as possible, making sure your feet are in the right spots, and putting the scale in a quiet room with a stable temperature. 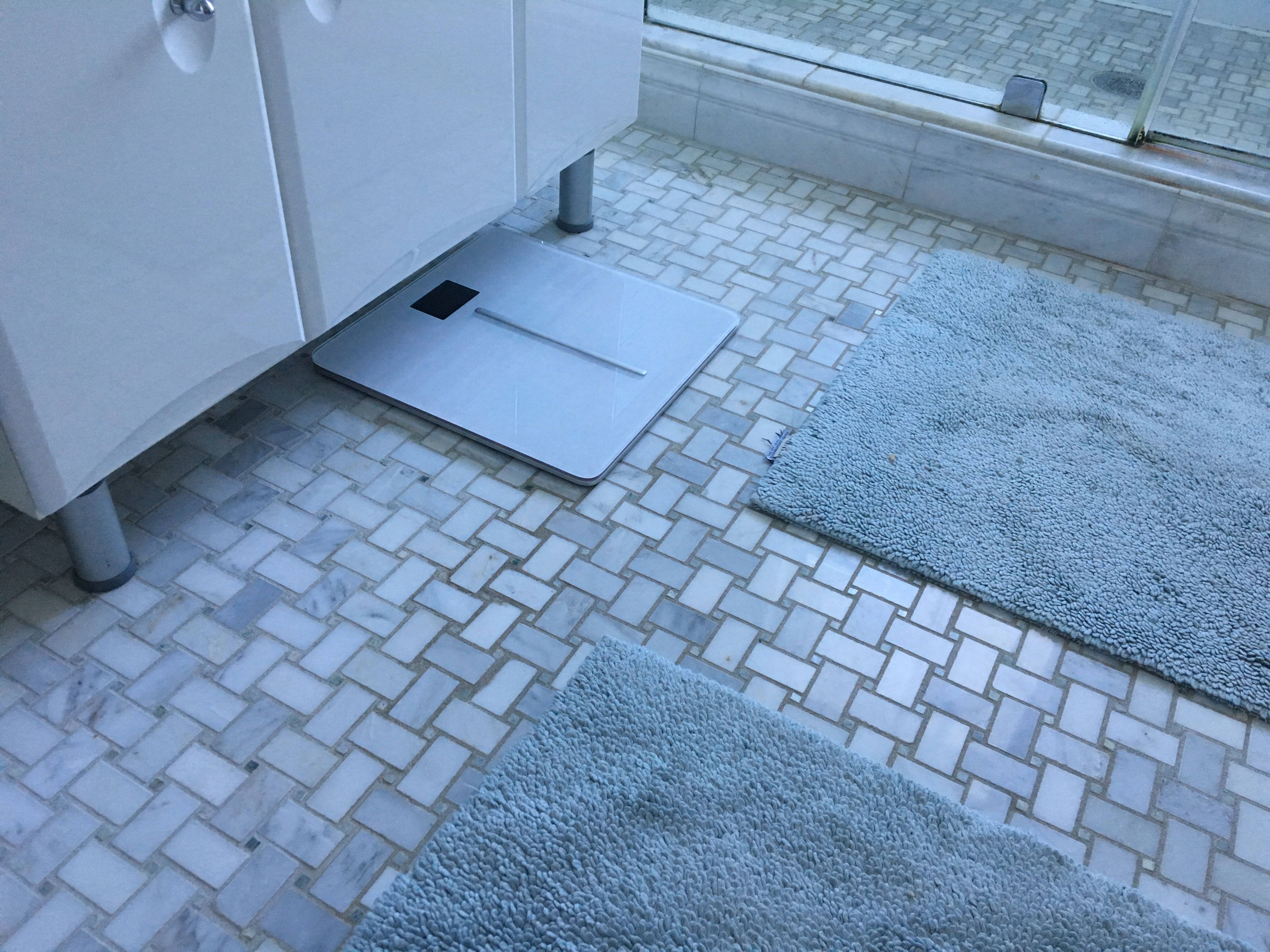 The other data, like your body’s percentage of fat (not something I was all that thrilled to know) is gathered using a scientific technique called biometric impedance. Basically, the scale sends a small, electric current through the lower half of your body, and its resistance is measured. Bone, water, muscle, and fat all conduct this current differently, and the scale measures each.

Your local weather shows up on the scale’s display because checking weather is a pretty typical morning routine. Putting this data on the scale can motivate you to step on it, so even if you don’t want to see how much you weigh, you’ll want to see that it’s going to be in the 90s later in the day.

In my house, my husband and my toddler also stepped on the scale. A small pop-up notification in my app said that the scale detected a new person, and I was prompted to name each of them. This step also save each of their weight measurements. And once you’ve set up an account on the app, whenever you step on, the first three letters of your name show up in the top left corner of the display, confirming you are who the scale thinks you are.

While the Withings Body Cardio isn’t a need-to-have, it’s a definite nice-to-have, and its app is smart enough to give you helpful tips and trend analysis. If I used this scale for longer than a week, or had specific concerns about my cardiac health, I might appreciate it even more.