Bling and you'll miss it

If you’re looking for a premium, ultraportable laptop, there aren’t many options to be found in the Windows world. Apple’s been owning this segment of the laptop market for so long that it almost feels like other companies have given up. But they haven’t, and HP is trying its hardest to change that perception with the new Spectre.

In terms of premium design and ultraportable features, the Spectre is as good as you can get. It’s super thin (the thinnest in the world, according to HP), super light, and super well-made. It’s made of aluminum and carbon fiber and even has some coppery-gold bling in case you forget that this isn’t your run of the mill bargain bin laptop. It’s priced premium too: the Spectre starts at $1,169, and the unit I’ve been testing sells for $1,249. In case you haven’t figured it out, those are Mac prices and HP is putting Apple’s computers – namely the MacBook and the MacBook Air – squarely in its sights with the Spectre. 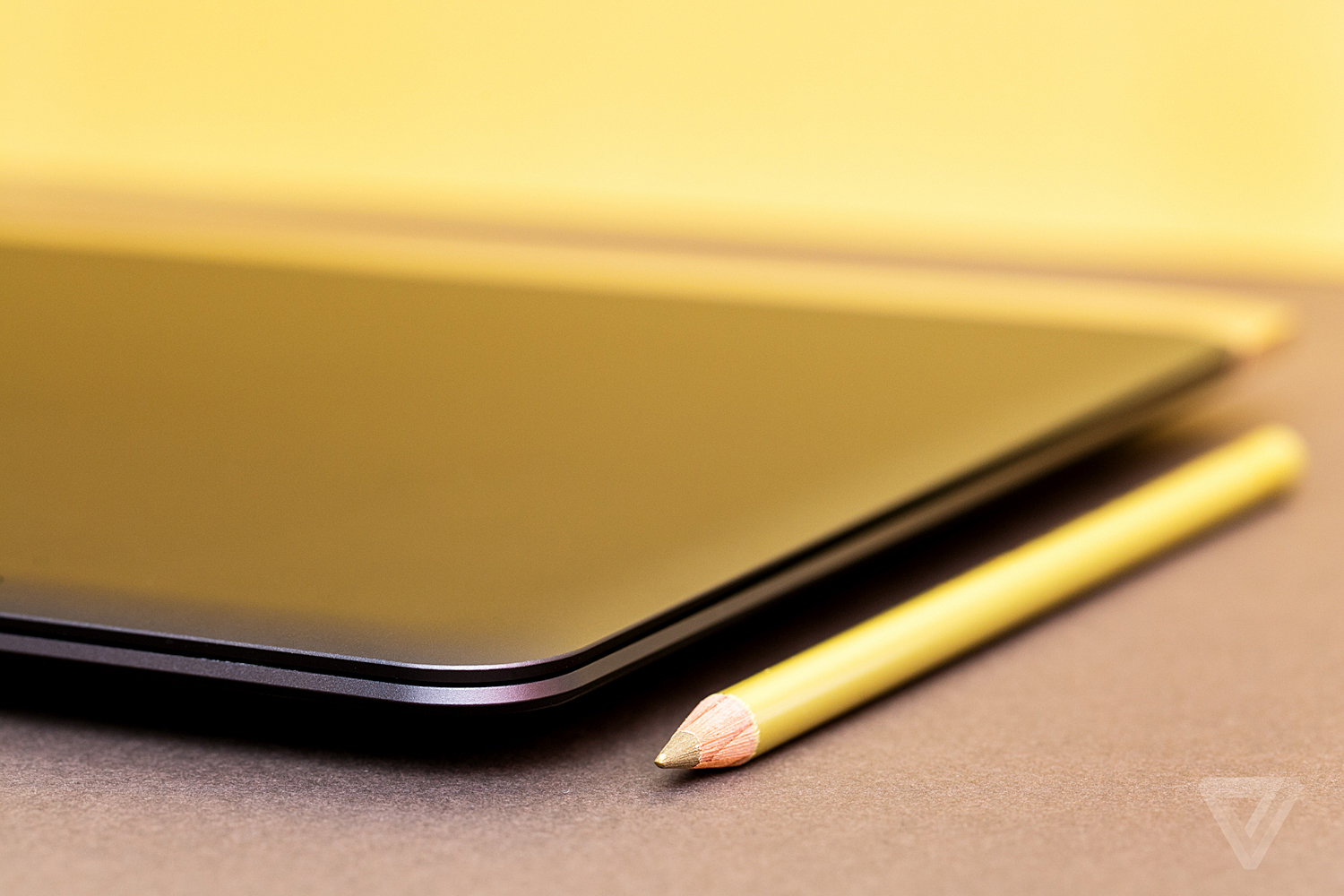 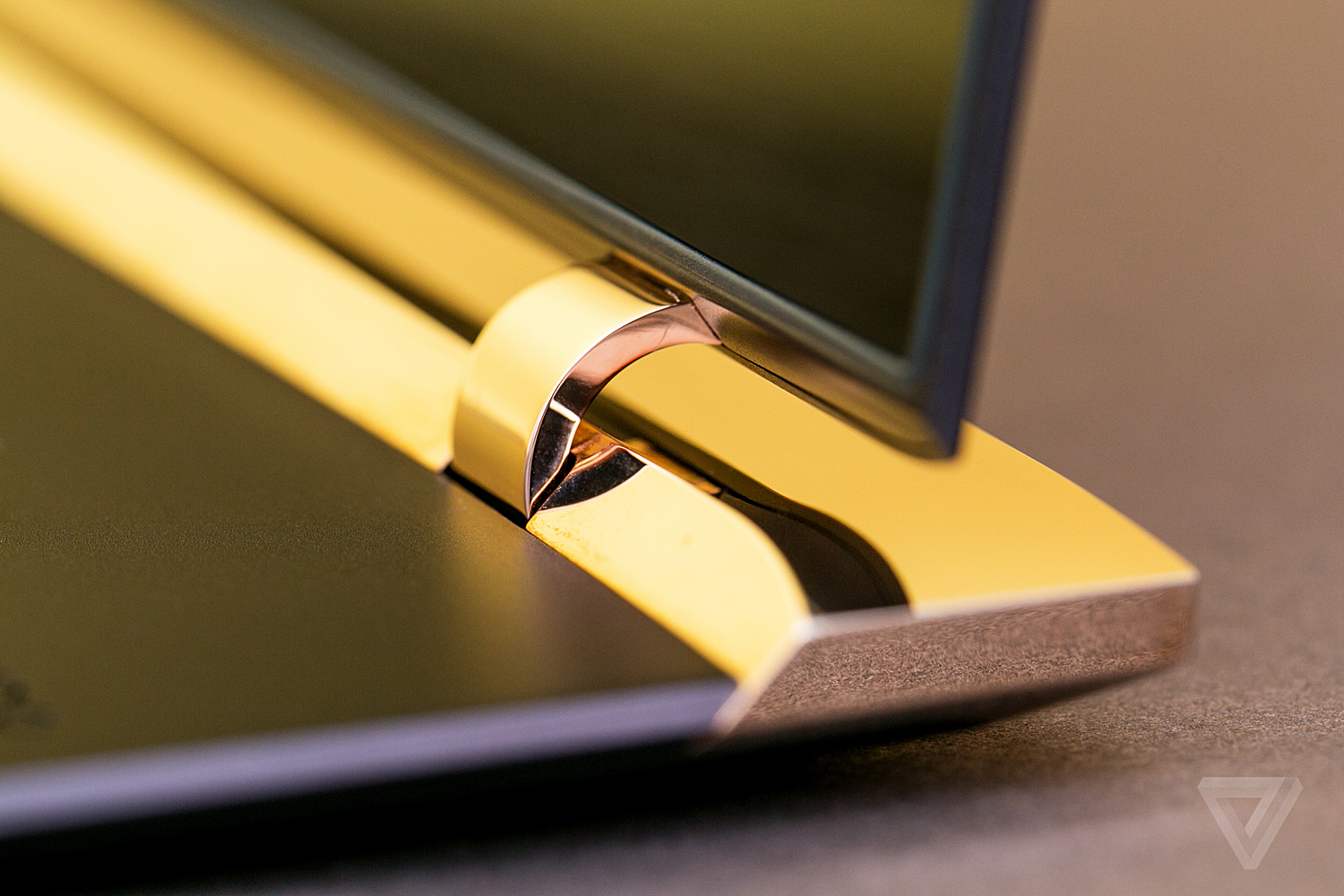 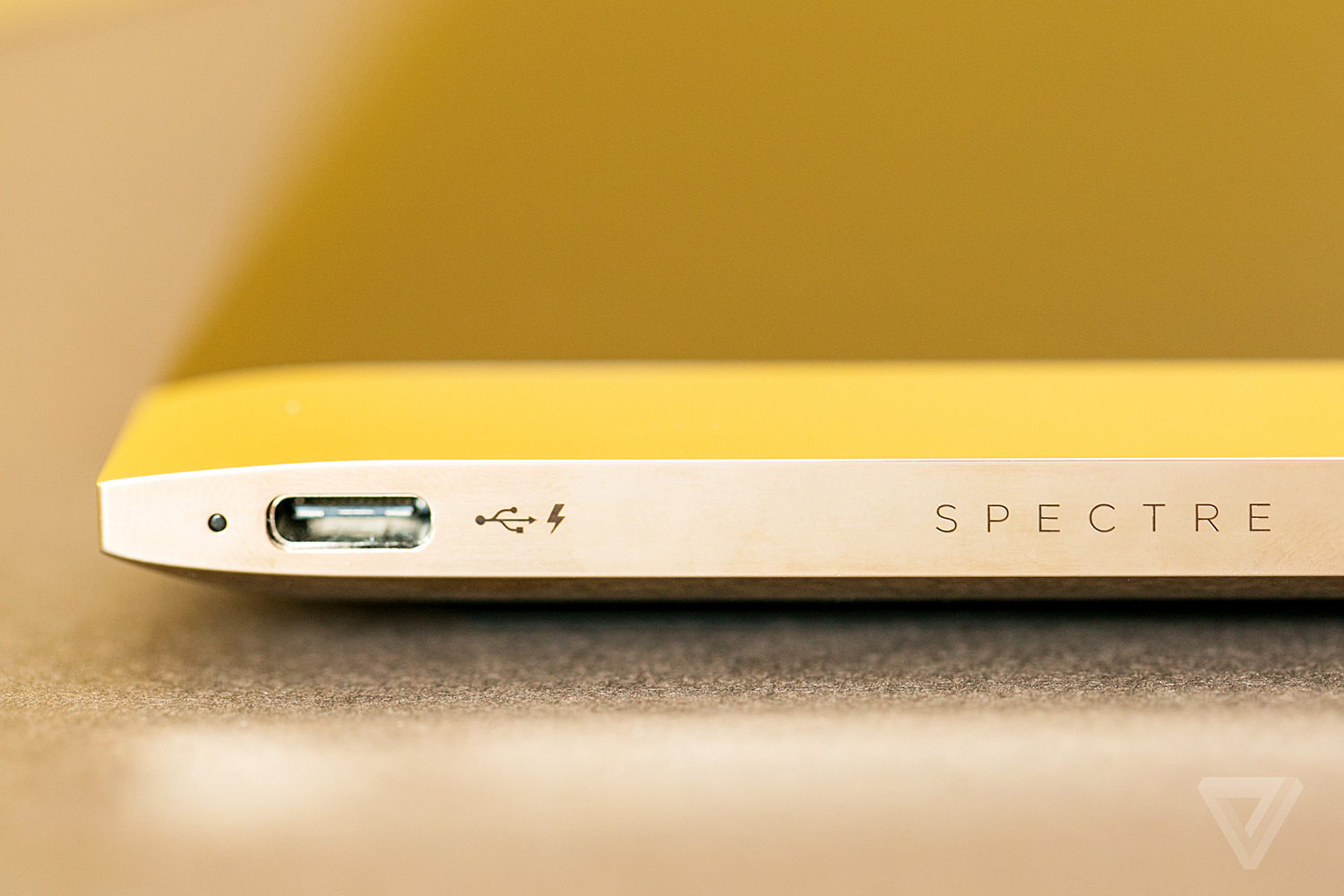 The Spectre’s design is eye-catching, but it can be polarizing. The dark brown metal finish stands out from the sea of silver aluminum laptops, and the details in the speaker grilles and the logo on the lid are handsome. But the display hinge, while very fancy and cool-looking, is clad in a shiny coppery-gold finish, and it’s definitely not a look for everyone. It’s also very prone to picking up fingerprints, which makes it go from "premium" to dirty-looking in just a few minutes of use.

The 13.3-inch display on the Spectre is larger than the MacBook’s 12-inch screen and it’s higher-resolution than the MacBook Air’s panel. At 1080p, it won’t win any awards for pixel density (and in fact, the smaller MacBook actually has a lot more pixels), but it’s plenty sharp enough for its size. It’s also bright with good viewing angles and covered in Gorilla Glass 4 for durability. The biggest limitation I’ve found with the display is actually due to the hinge: it doesn’t tilt back far enough for my needs, making working on the Spectre while at a standing desk more awkward than it should be.

Despite the Gorilla Glass, the Spectre’s display isn’t a touchscreen, which is a bit odd for a high-end Windows 10 laptop. While many other Windows machines attempt to be more than a laptop by transforming into a tablet, the Spectre is content with just being a very well executed traditional laptop that expects you to interact with it solely through the keyboard and trackpad. HP says that a touchscreen panel would have made the Spectre thicker, so it was omitted in the pursuit of thinness. 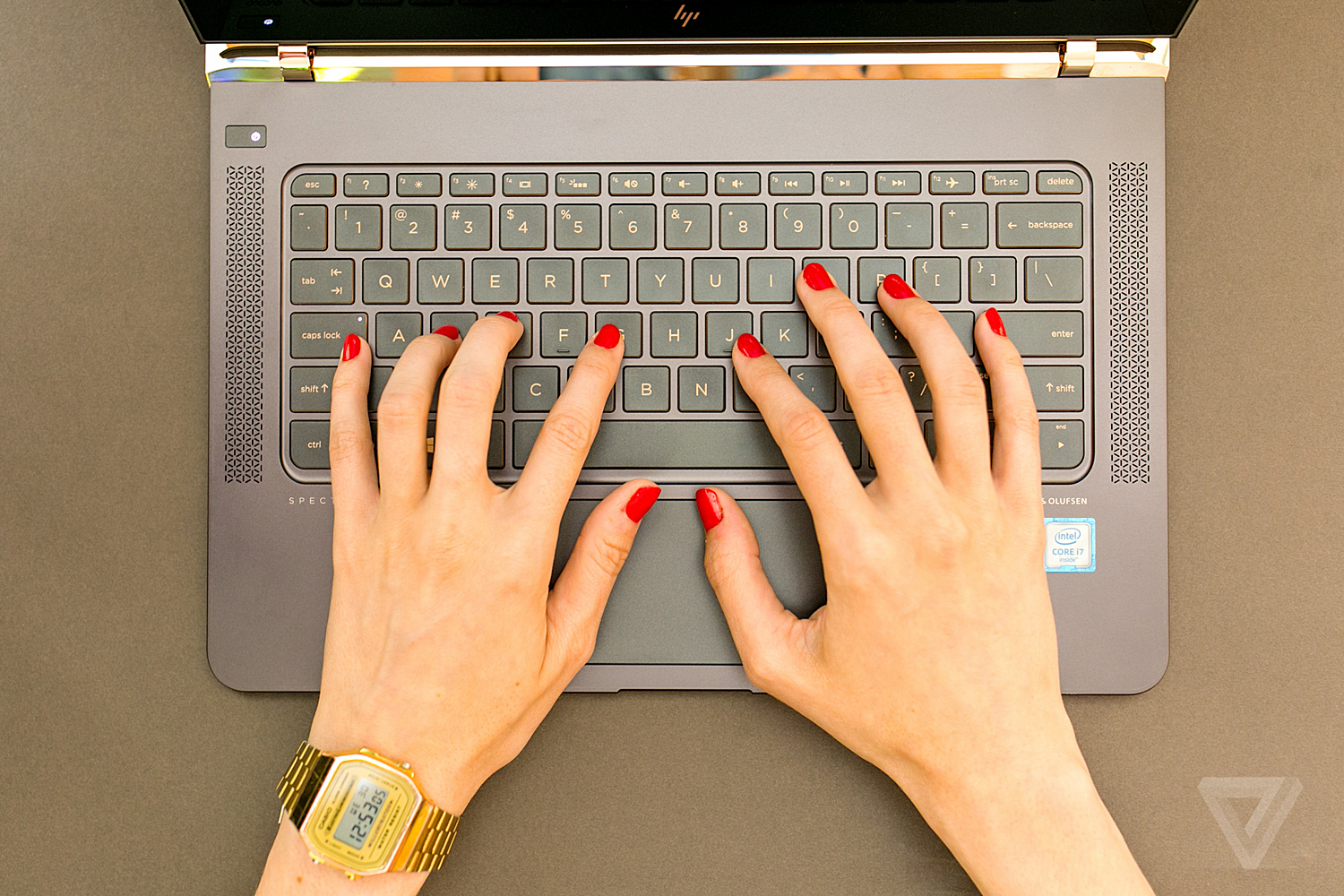 In terms of other traditional laptop qualities, the Spectre hits the right marks. The keyboard is comfortable with good travel and backlighting. I had no trouble getting up to my usual speed typing on it. Likewise, the trackpad is smooth and glassy and tracks very well without making the cursor jump around erratically. It’s smaller than the trackpads on Apple’s computers or even other Windows machines, however, and that can make it feel cramped. I didn’t miss a touchscreen on the Spectre very much… until I got frustrated with the small size of the trackpad and wished I could just reach up and poke my finger at the display.

The Spectre is also more powerful than you might expect such a thin laptop to be. The Core i7 processor and 8GB of RAM in the model I’ve been testing have had no trouble handling the various day to day activities I’ve been throwing at them. The Spectre can multitask between a bunch of apps easily, crunch through Word documents and Excel spreadsheets without issue, and can even handle image editing in Photoshop without really breaking a sweat. The Spectre is by no means a gaming machine, nor is it designed to be, but it’s more than powerful enough for productivity work. 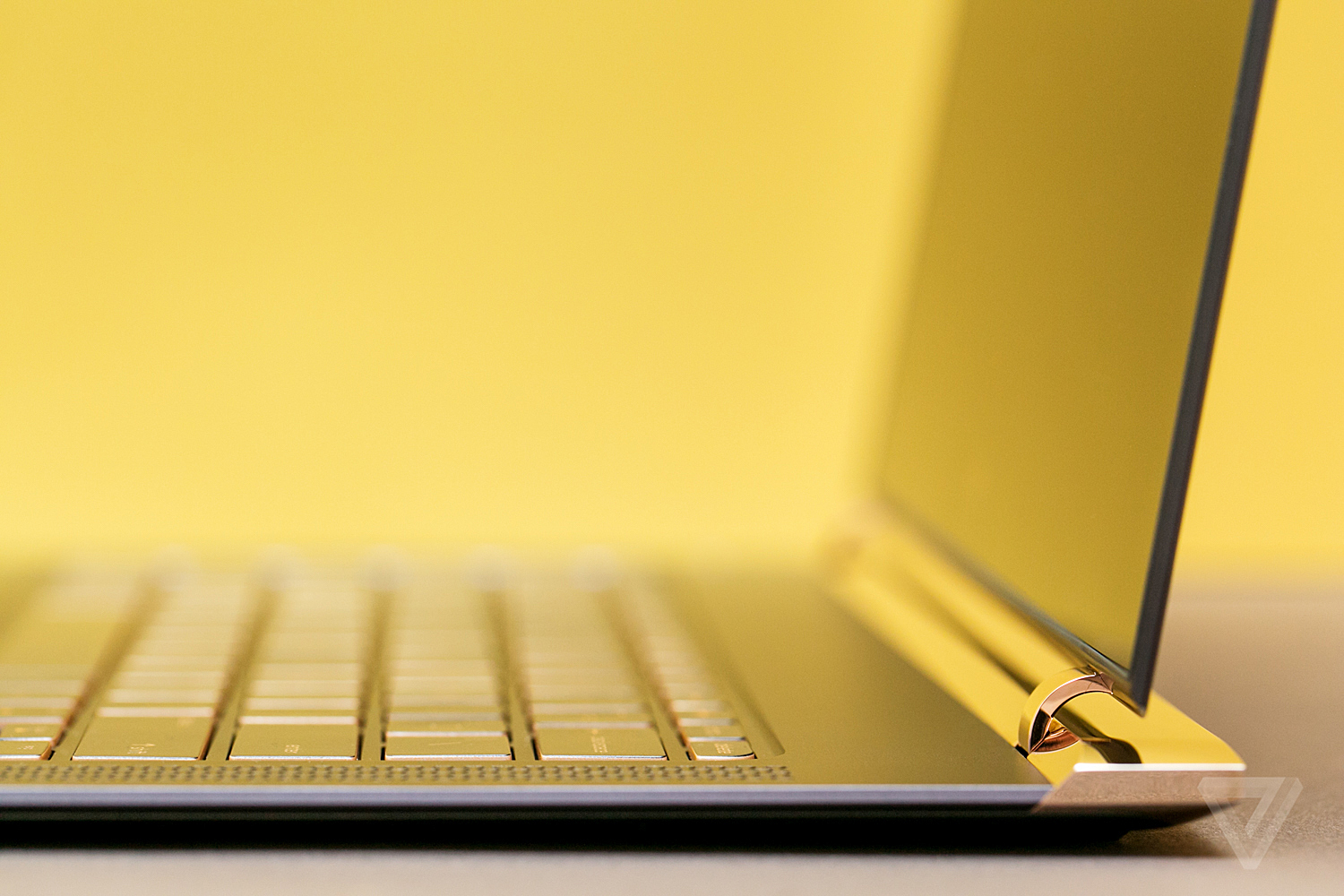 Part of the reason the Spectre doesn’t break a sweat is because of the fan system HP designed for it. Most ultrathin computers, such as the MacBook, use Intel’s weaker Core M processors, which don’t require a fan. But as I mentioned earlier, the Spectre has the Core i chip, and it needs a fan system to keep it cool. HP’s solution for this maintains the laptop’s ultra-thin profile and sucks in cool air from underneath the computer and directs the hot air out the back of the machine. It’s a clever bit of engineering and it’s effective at keeping the processor running at its top speeds. (HP refers to the system as "hyperbaric cooling.") I occasionally heard the fans spin up when doing demanding tasks such as system updates or heavy photo editing, but most of the time they were not noticeable to me.

The Spectre doesn't skimp on performance

Like many other ultrathin computers recently released, the Spectre relies on USB-C for all of its wired connectivity. But instead of just one port as you might find on the MacBook and other tablet / laptop hybrid computers, HP has installed three USB-C ports on the Spectre. You can recharge the Spectre through any one of the three ports, but two of them support high-speed Thunderbolt connections, so you can actually push multiple external 4K displays with the Spectre. Having three ports is definitely better than one, but because USB-C is still so new, I had to carry around a handful of adapters to plug anything into the Spectre, even if I just wanted to charge my phone. (HP is throwing in a USB-C to USB-A adapter with Spectre machines bought from Best Buy; others, such as HDMI or ethernet adapters, run $49 a piece.)

Not everything is perfect with the Spectre. Despite having four speakers and Bang & Olufsen branding, audio output is tinny and unpleasant. But I’m more disappointed with the Spectre’s battery life. Despite HP’s claims of 9 hours and 45 minutes of stamina, the Spectre lasted 7 hours and 21 minutes in our rundown test using the Edge browser, and 5 hours and 10 minutes with the same test in Chrome. In my everyday use, which consisted of a lot of web browsing in Edge, and using apps such as Word, Twitter, Slack, and Mail, I was able to use the Spectre for about six hours before it needed to be recharged. That’s long enough to cover me in a cross country flight, but not long enough to last an entire workday. Depending on your needs, the Spectre’s battery life might not be a deal breaker, but if you’re looking for the ultimate mobile machine, the Spectre probably isn’t it. 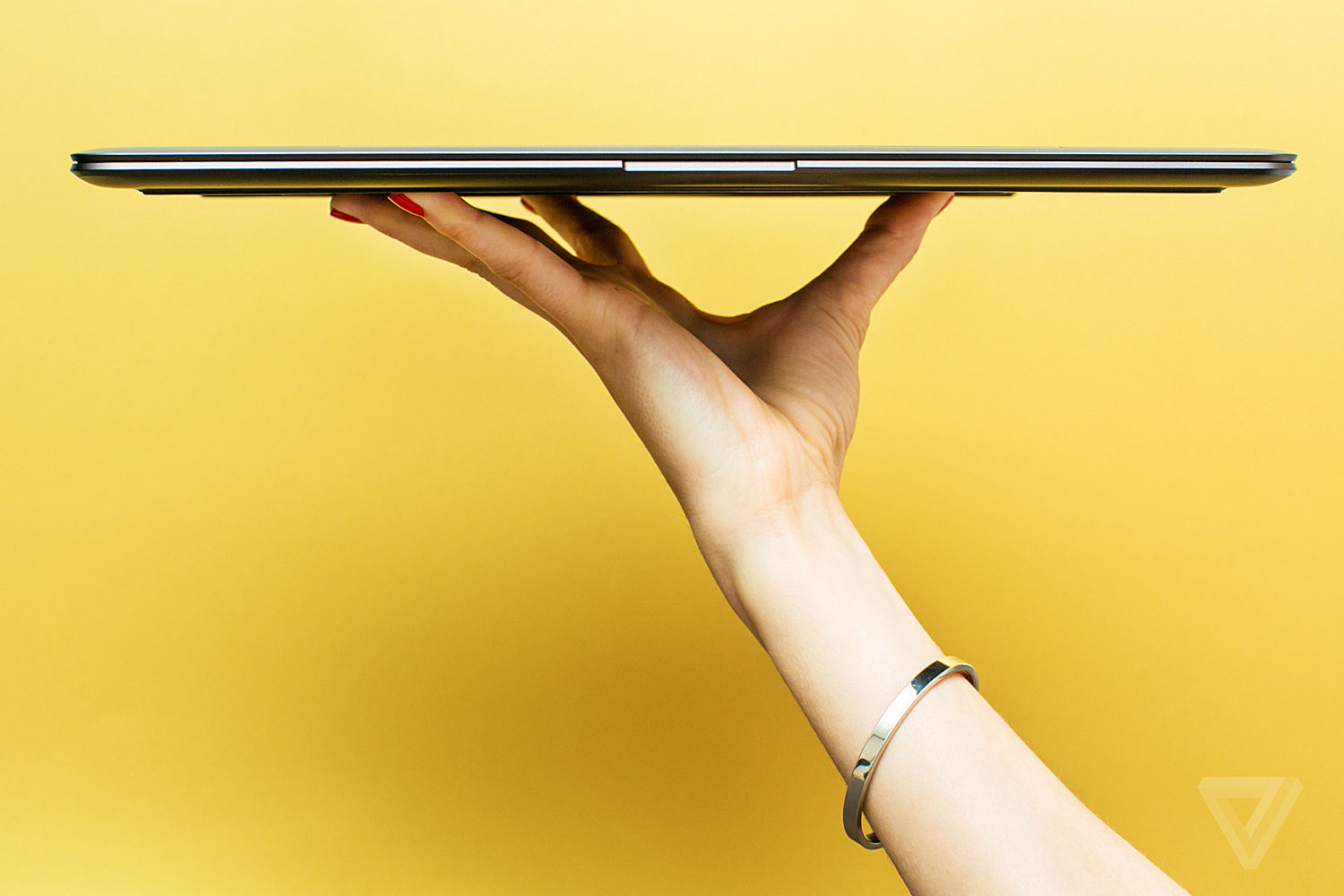 Despite my few complaints with the speakers and battery life, the Spectre is still an excellent laptop. It does all of the things a traditional laptop should do: it has a great display, great keyboard, good trackpad, fast, quiet performance, and can be used on your lap without feeling like it’s all going to fall apart. And the Spectre does all of this while being thin and light enough to carry around all day.

With the Spectre, HP has proven that it can build a premium, ultraportable laptop that competes with Apple’s MacBook and MacBook Air. There’s really nothing else like the Spectre in the Windows world right now, and while battery life could certainly be better and I’d love a larger trackpad, I can’t think of a more appealing Windows 10 laptop.

HP proved it can compete with Apple

"Most appealing" certainly doesn’t mean "best," though. If you are a normal person who doesn’t care about thinness and style above all else, there are better options. The XPS 13 is still the de-facto laptop for Windows, and if you want more power, Microsoft’s own Surface Book is a good option. But if you want to make a statement and are willing to take a few compromises, the Spectre 13 is a very thin stick of a laptop that speaks loudly. 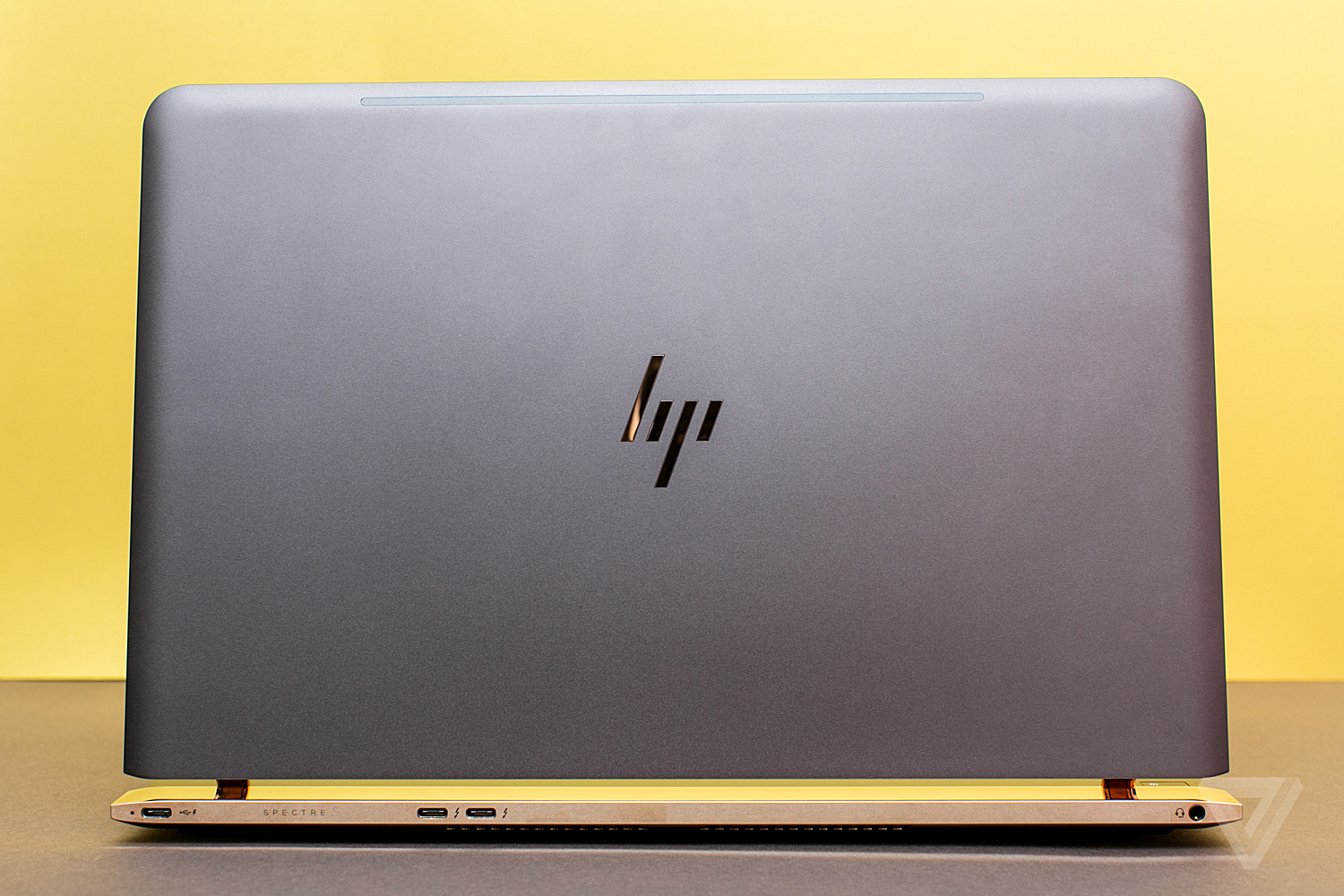