How should TV shows and movies depict texting?

How should TV shows and movies depict texting?

It's 2016, and we still don't have a foolproof solution

By Jamieson Cox and Lizzie Plaugic

How do you translate our increasingly digital lives into compelling, dynamic on-screen action? It’s one of the biggest questions facing the people making 21st century film and TV, and it remains largely unresolved. Some directors are setting their entire movies within the contexts of desktop screens and captured webcam footage; others are sticking with traditional conversations and analog characters, even if it means their show-worlds are more and more distant from the way we actually talk and live. Others still are trying to find a middle ground between convention and realism, with mixed results.

The tension between these two approaches is most visible in the way TV shows and movies handle texting. Using phone calls to facilitate conversations between two separated characters feels hollow when billions of people around the world use apps like Messenger and WhatsApp (not to mention good old-fashioned SMS) on an hourly basis, but there’s still no foolproof way to depict a text-based chat on screen, and directors have been trying to find one for nearly two decades. Shows like Sherlock and House of Cards threatened to crack the code earlier this decade, but new shows are still struggling to bring chats into their dialogue toolboxes in an effective way. That’s why we’re getting together for a text-based conversation of our own: to review the state of cinematic texting in 2016, and to propose some solutions to this complicated problem. 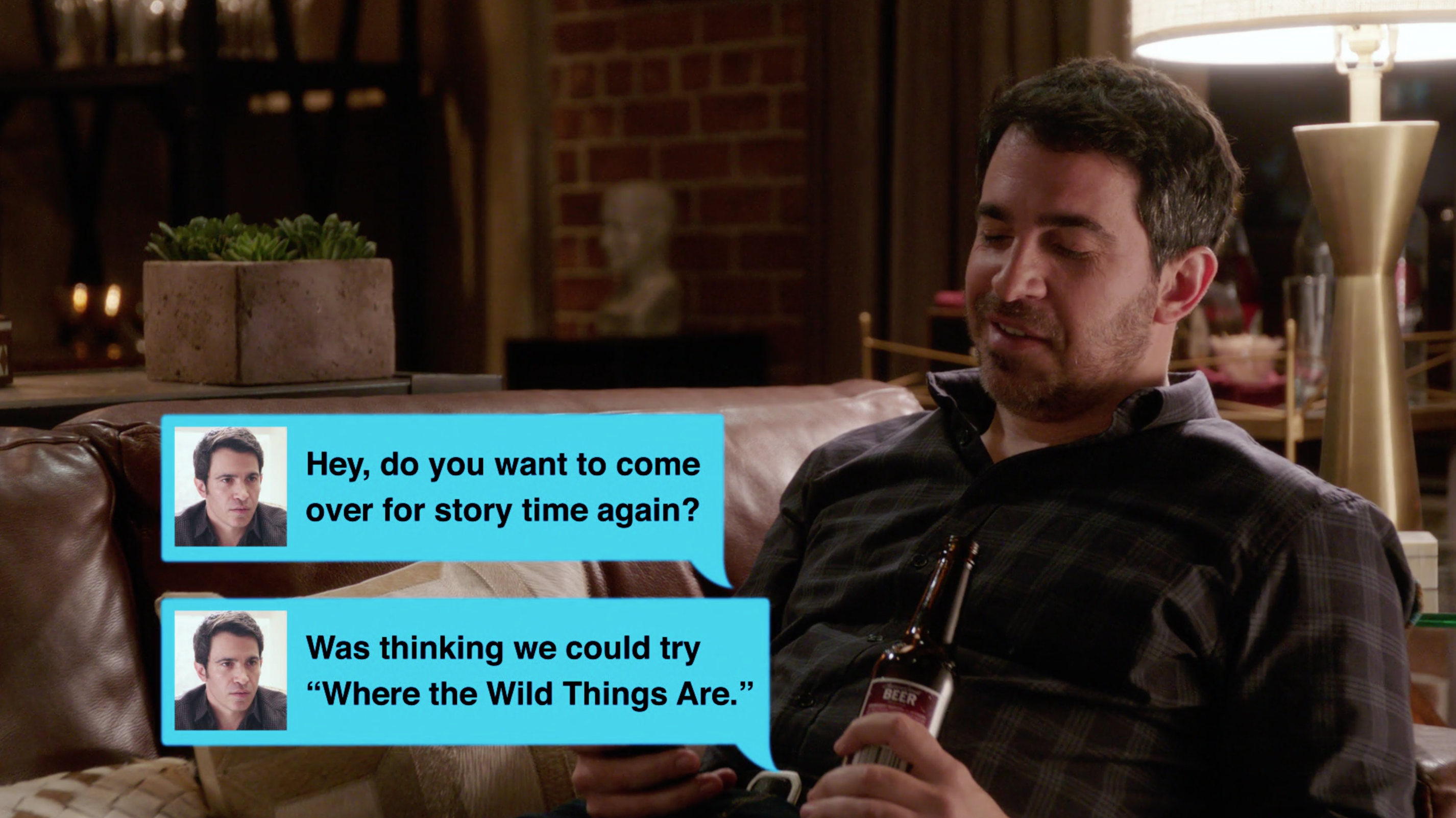 Jamieson Cox: Lizzie, I have a confession to make: like most of my pieces, this started with unsolicited whining about something I enjoy. I’m a big fan of The Mindy Project, the Mindy Kaling-led sitcom that just wrapped its first season as a Hulu original. There’s only one thing about the show I just can’t stand, and that’s the way its characters text.

When characters on The Mindy Project send each other messages, the show’s viewers see the contents within standard-issue text bubbles. They come with little avatars so you know who’s talking. That’s all par for the course, right? There’s more: while you’re reading the contents of a given message, you hear the actor reading it as if it’s a line of dialogue they’re speaking. How does that work in practice? Look back at the text above, which is cut from an episode that’s just a few months old. You’re reading that text in your head while Danny (Chris Messina) says out loud, "Hey, do you want to come over for story time again?" And when someone sends an emoji, like in the season two scene below, you often hear that actor read out the corresponding emoji name. (Imagine Kaling saying "winky face" as the text below pops up.)

This would be laudable if it were part of a show-driven accessibility strategy, but it’s a terrible storytelling choice otherwise: it slows the show down, and it doesn’t respect your intelligence. You can read the words faster than the actor can speak them, so you’re left waiting a few extra seconds for them to finish the line before the show moves on. It sounds like a minor gripe, but it really adds up over the course of an entire episode, and beyond that it’s just frustrating to hear someone say the words "heart emoji, party emoji, eggplant emoji" out loud. I complained about it at a recent meeting like the cantankerous co-worker I am, and now we’re here. Do you run into this problem with any of the shows you watch?

Lizzie Plaugic: Ah yes, the ol’ saying-a-text-out-loud-while-texting quadrant of television that ignores how people text in real life (silently and stone-faced). I too enjoy The Mindy Project on a cloudy Monday night, but the show’s texting style never really started to bother me until you pointed it out. I kind of liked hearing the texts spoken with different characters’ inflections, because when I read texts in my mind, it’s just in a dull monotone. This technique added a level of sentience my own internal consciousness usually lacks. And the emoji-reading, while odd, also seemed like an accurate representation of how Mindy Lahiri would text. She says "exsqueeze me" out loud, so I’m pretty sure she wouldn’t hesitate to say "eggplant emoji" in her head. But once you pointed out that it was annoying, I went back and watched an episode, and the texting did frustrate me more than usual. Maybe just because I was looking out for it.

The thing that peeves me the most about texting in TV shows and movies is when I’m forced to read a text off someone’s phone screen. Take that scene in the second season of True Detective when someone blackmails Paul Woodrugh: 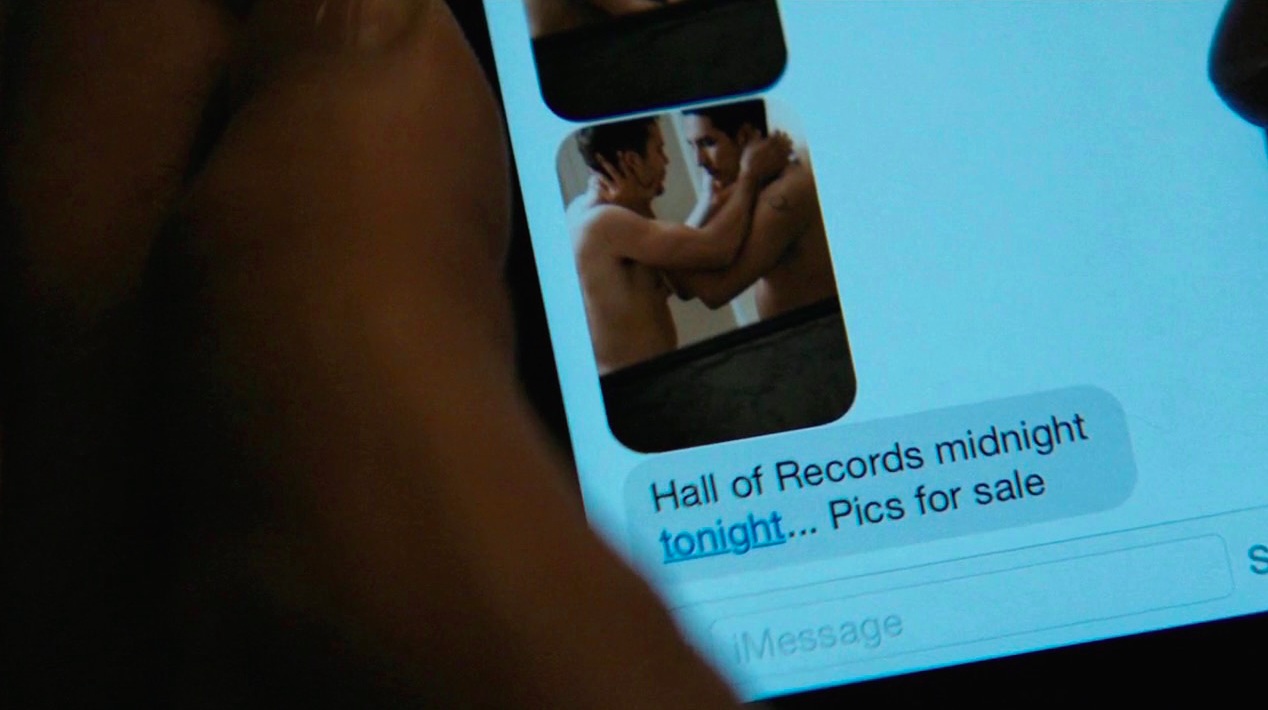 Why would I want to look at a fictional screen while already watching a show on a real-life screen? Maybe this has to do with the fact that I don’t like looking at other people’s phones in general, or maybe it’s just because I usually have a hard time actually reading texts when they’re presented on TV this way. I get caught up in the surroundings and usually forget to look at the actual words.

Jamieson: Yeah, that’s totally frustrating — and it’s inefficient, too. That phone can’t be taking up more than 50 percent of the screen, meaning the remaining half is just empty, distracting space. If you’re going to opt for the "shoot the screen" method, you might as well get in as close as possible, right?

I wasn’t sure how to articulate my problems with texting on-screen until I watched an expert do it for me. Every Frame a Painting’s Tony Zhou tackled this issue through a cinematographer’s lens in a 2014 video called "A Brief Look at Texting and the Internet in Film," tracing on-screen texting back to the early ‘00s and isolating the reasons why some popular texting-in-film methods fall short. Focusing on a screen-based text conversation is expensive and time-consuming, because you can’t see the character react and respond while they’re moving the conversation forward; having characters read their texts or share the information some other way is too far removed from how we actually communicate to make sense.

Trust your viewers to connect the dots

I think the quality that defines the gap between good and bad cinematic takes on texting is trust. When texting is successfully depicted on screen, it’s usually because directors are trusting their viewers to connect the conversational dots, and it’s treated as an opportunity to express some style rather than a utility and nothing more. All you need are a few lines of text in a readable font — it’s simple and surprisingly elegant, like the House of Cards shot that opened this conversation. You don’t even need to make the sender and recipient clear, because your viewers are smart enough to figure it out for themselves.

Zhou’s video is almost two years old, but I think the commentary contained within still holds up. There are a ton of movies and TV shows out there that are still getting texting wrong, and even savvy, stylish showrunners can trip themselves up trying to communicate information through text alone. (Here’s looking at you, Scream Queens.) Now that we’ve established a few shows with room for improvement, I’m curious: what have you seen lately that gets texting right? 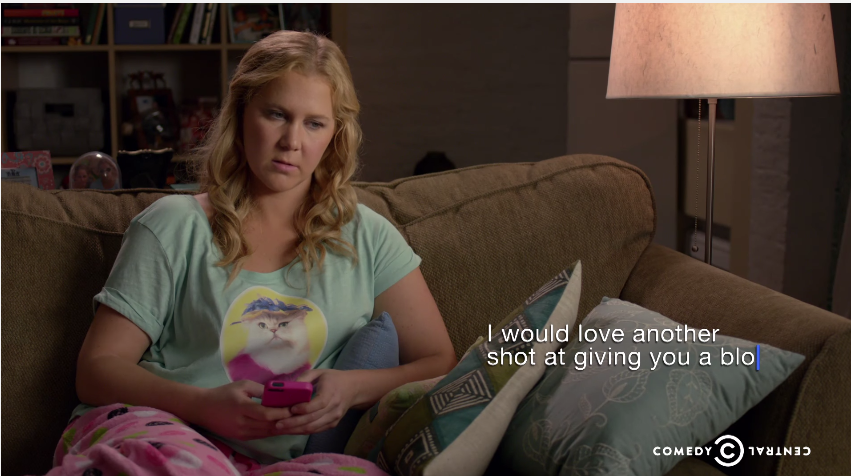 Lizzie: I’ll do you one better than a show and talk about one specific scene that I think does texting right: Amy Schumer’s sketch about sexting. A lot of times, texting on television or in movies feels superfluous, like the directors just threw in a texting scene just to prove they could. Even House of Cards, which I think usually does a pretty good job with this, sometimes allows text conversations to drag on too long without actually relaying any information. But texting is the entire premise of the Schumer sketch, so it’s done in a more methodical manner than on most shows, and it actually feels relevant to the subject matter at hand.

Here, the sexts are portrayed as on-screen bubbles, a format lots of shows use. But the viewer also gets to read Amy’s texts as she types, deletes, re-types, and sends them. The style might slow down the pace of the sketch, but I think it shows an awareness of how people actually text. Even Frank Underwood probably rethinks texts sometimes, but all we ever see on House of Cards is the text after it’s been sent.

When the texts have actual utility, they shine

Jamieson: I think successful on-screen texting is less dependent on technical details (like the ones in Zhou’s video) than the importance of texting within the world of the show. When it’s just being used for stylistic purposes, it has to look perfect or it falls flat. When scenes and dialogues are reliant on texting and the unique things about it — like Schumer writing and rewriting messages ad nauseum, or Susan Sarandon’s character relentlessly poking her beleaguered daughter with blippy texts in Lorene Scafaria’s delightful The Meddler — it shines, because you can’t imagine the action without it. If there’s a recommendation emerging out of this conversation, that’s it: don’t make your characters text unless it’s a fundamental part of the action.