The Millennium Falcon may have an iconic shape, but it was never designed to fly. That is, until toy makers Propel got their hands on it, and turned it — along with three other classic Star Wars ships — into some of the most straightforwardly fun quadcopters I’ve ever played with. “It’s basically a Frisbee,” says Propel CEO Darren Scott Matloff of the Falcon’s design. “When it’s flying the air wants to push it down. But we managed to get it to stay up.”

Matloff's company has been developing their Star Wars quadcopters for two years, and are finally getting ready to sell them. Along with the Falcon, they’ve created a T-65 X-Wing fighter, Darth Vader’s Tie Advanced X1, and a speeder bike from Return of the Jedi — complete with miniature trooper. Propel showed off all four at this year’s Star Wars Celebration in London, and well, they really can fly. 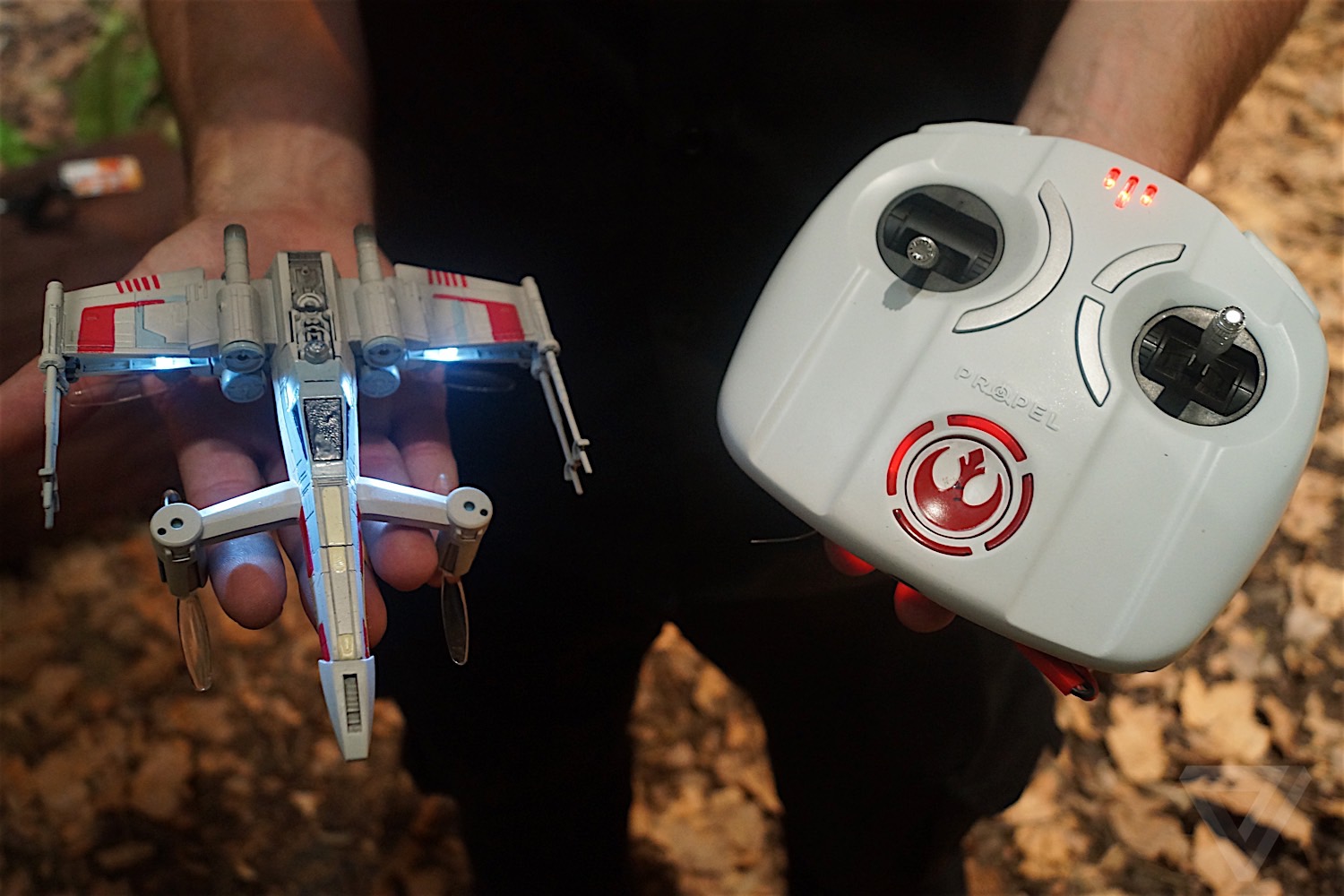 Propel's X-Wing battle quad with Rebellion-themed controller.
Each of the models sits comfortably on the palm of your hand and is powered by swappable lithium-ion battery packs. They have four props apiece, made from a clear polycarbonate plastic that’s buffed to look as glassy as possible. The end result is that you can’t see the blades too clearly when they’re in motion — although you definitely still hear them. No one makes a quiet drone, especially not ones that can hit speeds of 40 miles per hour in under three seconds. The rotors are positioned upside down to build air pressure underneath the craft (a system that Propel calls "reverse propulsion"). This means that instead of being sucked up into the sky, the drones push off from the ground. "That allowed us to make ships that didn’t have holes in the them, so that they appear intact," says Matloff.
The drones sit on a cushion of air, and will ship with a flight mode for beginners

I tried my hand flying an X-Wing in one of Propel’s exhibition stages (the choice was between the forest moon of Endor and the exterior of the Death Star; I went for the trees), and although I’m quite a shaky pilot, it was still incredibly fun to see the craft whizzing around in front of me. The prototype models don’t have any stabilization aids, so I kept things relatively steady, but Propel’s professional pilots were able to dodge through trees, squeeze under logs, and perform flips and loop the loops. Propel says the final versions of the quads will have stabilization aids for learner pilots (just like drones from Parrot or DJI), but this will be optional, so advanced fliers can still get the most out of their craft.

When not in the air, though, the attention to detail on these quads is what sets them apart from other Star Wars drones we’ve seen. The models themselves are plastic molded and painted by hand, but look — certainly to a novice toy aficionado such as myself — beautifully crafted. Propel says it’s currently arranging for more detailed molds for the final consumer versions of the quads, but the prototypes at Celebration had detail aplenty, from the struts and girders on the exterior of the Falcon to the astromech droid in the back of the X-Wing. 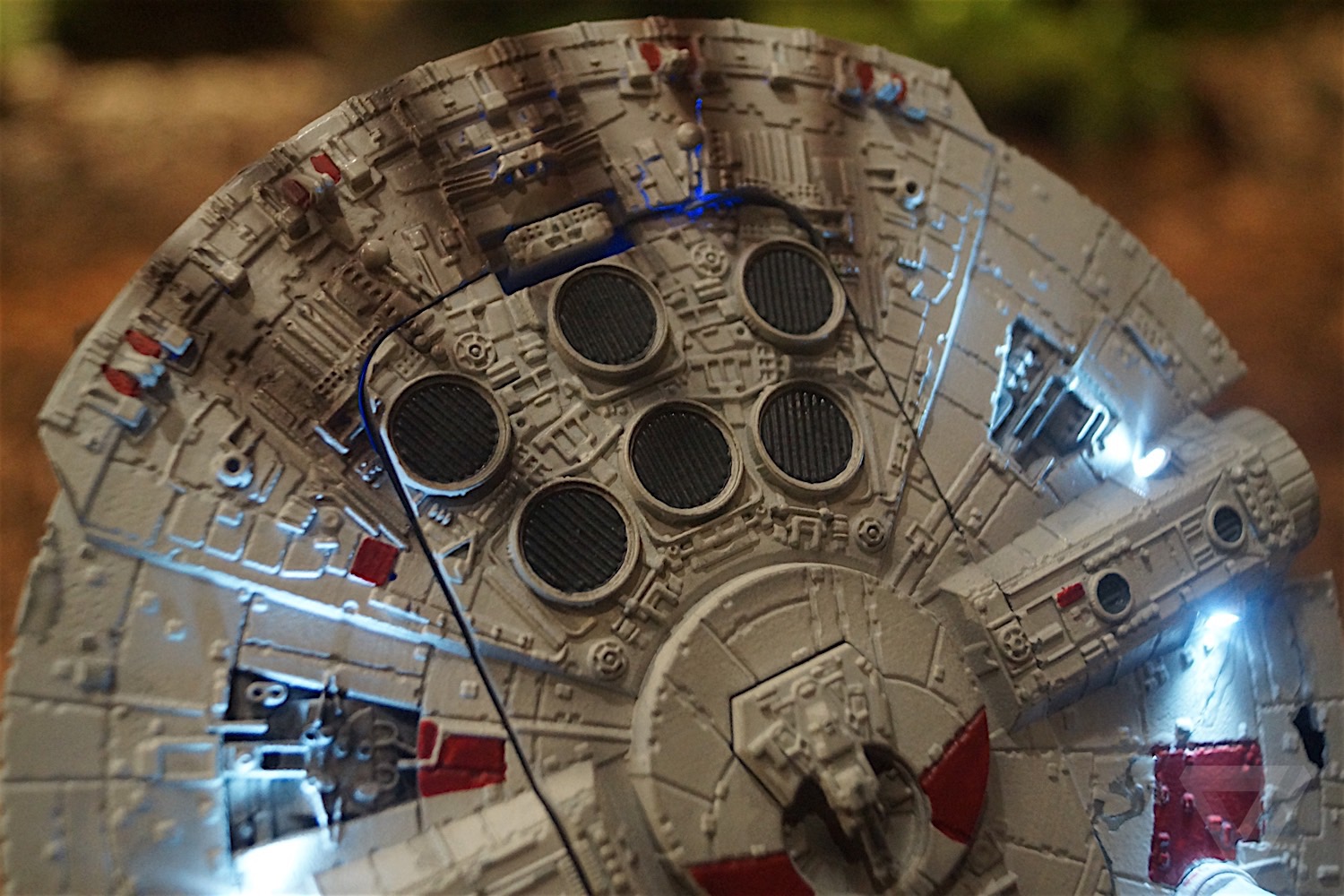 A close-up of some of the detail on the Millennium Falcon.

The quads don’t just fly either, but do battle with lasers. When a ship is hit by a laser from an opposing ship, its paired controller (Empire or Rebellion-themed, naturally) shakes in the pilot’s hands. After three direct hits, the drone will slowly spiral to the ground the game is over. Although the prototypes weren’t ready for one of these battles when we saw them, the lasers alone were pretty striking. Propel has put an incredible amount of detail into the packaging too, with each quad coming in a presentation case with a relief model of the ship or bike on the front. Lift off the top and speakers stay playing the Star Wars theme or some relevant quote. (Open up the Millennium Falcon, for example, and you’ll hear a familiar voice boasting about the Kessel Run.) Each model is individually numbered, and for the real hardcore collectors, will ship with a wax seal. That’s "for the people who are never going to open it," says Matloff. He adds: "We wanted to speak to the older Star Wars fans, who are really collectors. And I wanted to create something I could put on my desk and geek out about."

The drones haven't been licensed for sale in the US yet

Unfortunately, though, getting your hands on one of these quads might be tricky. They’re currently only licensed for sale in Europe, the Middle East, and Africa, and Matloff says that while they’re keen to negotiate to sell in the US, there’s no deal in place yet. American fans will have to buy them from online retailers instead. There’s also no pricing available yet, but interested fans can reserve the option to buy the models from Propel’s website. There have been no confirmed prices, but we've heard reports of between £200 to £300 ($300 to $400) for each quad. The company expects to start shipping the quads in September, and then getting them out to stores in the following months.

"Going to the movies, seeing Star Wars; that was my time to become present in the moment and let the whole world slip away," Matloff says about his childhood experiences with the franchise. "I think it’s really essential we don’t lose that. We can create that magic at the movies, but we can also create it with the products, the toys, we make."

Each of the battle quads comes in a presentation case.
Most Popular
From our sponsor
Advertiser Content From