If I Am Setsuna had come out 20 years ago, it’d be the kind of story-driven role-playing game that would’ve stuck with me throughout my life. Years later I’d listen to the stirring piano-driven soundtrack and reminisce, or flip through an art book to remind myself just how amazing the character designs really were. It’d be one of those imperfect but wonderfully memorable PlayStation-era experiences that I’d complain nobody makes anymore.

But they do exist — at least now. Last year Square Enix, the company behind iconic Japanese RPG franchises like Final Fantasy and Dragon Quest, revealed a new studio drably called Tokyo RPG Factory. The goal of the studio was to create those kinds of classic experiences, the games that defined the company during the 16- and 32-bit eras, to rekindle some of that magic. “The ‘good old days’ are coming back,” the studio wrote in a letter to fans.

I Am Setsuna is the studio’s first release, and it does exactly what it set out to do. It’s not perfect by any stretch, but it hones in on what made games like Chrono Trigger and its ilk so remarkable. It takes you on an epic fantasy adventure that’s beautiful, sad, and often frustrating, but also very different from just about every other game in 2016.

The game puts you in the role of a mysterious mercenary who is given an unpleasant job: to find a young girl in a remote village, and kill her. Without giving away too much, that girl turns out to be the titular Setsuna, and instead of killing her, you end up accompanying her on a lengthy journey. Like virtually every other RPG, I Am Setsuna is a game about saving the world, but its most important moments are the smaller, more personal ones. This is a sad game, where most of the major twists involve heartbreak and mortality. There’s a character who has to decide whether to live a happy, fulfilled life and die young, or spend a normal lifespan in hiding. Another character has lived in isolation for years battling monsters in place of the demons in his head. Setsuna herself is on a long quest that she knows will end with her sacrificing her life to save the world.

This all plays out in a very linear fashion. Unlike modern RPGs where choice is at the forefront, I Am Setsuna sticks to the straightforward narratives of its predecessors. There’s a familiar rhythm: you play through a monster-infested dungeon, rest up in a safe town where you’ll learn more about the story, rinse and repeat. There’s a world map, though it doesn’t offer much to explore aside from pretty landscapes. There are times when it seems like you’re forced to make a decision, but these moments don’t influence much, aside from changing a few lines of dialogue. It may seem archaic to new players, but for those who grew up with the role-playing games of the 1990s it’s a comforting experience: I Am Setsuna has a story it wants to tell you, all you need to do is push forward to experience it.

The gameplay is similarly familiar. I Am Setsuna’s combat is like a mash-up of various Square games, pulling elements from titles like Chrono Trigger and FF VII. Battles are turn-based, but not random; instead, you’ll see your enemies wandering around, and if you need to you can often avoid fighting them altogether. The game utilizes the active time battle, or ATB, system from the FF series, which lets you know — and sometimes control — when the members of your party can perform actions. Once you’ve settled in with a team and skills, the combat starts to follow a pleasing rhythm.

For the most part, I Am Setsuna doesn’t make any major concessions for modern players. There aren’t a lot of tweaks or changes to create a more palatable experience for those who don’t like the particular flavor of Japanese RPGs. In a lot of ways the game is actually just as frustrating as its predecessors. Save points in dungeons are often spaced far apart so that you can explore for a long time and then lose hard-earned progress because you died before reaching a spot to save your progress. There’s an argument that this decision creates a rewarding kind of tension; the sense of relief when you do reach that save point after an epic series of battles is euphoric. The same could be said of the game’s later boss battles, which are punishingly difficult and often require a lot of grinding and a little luck to complete. 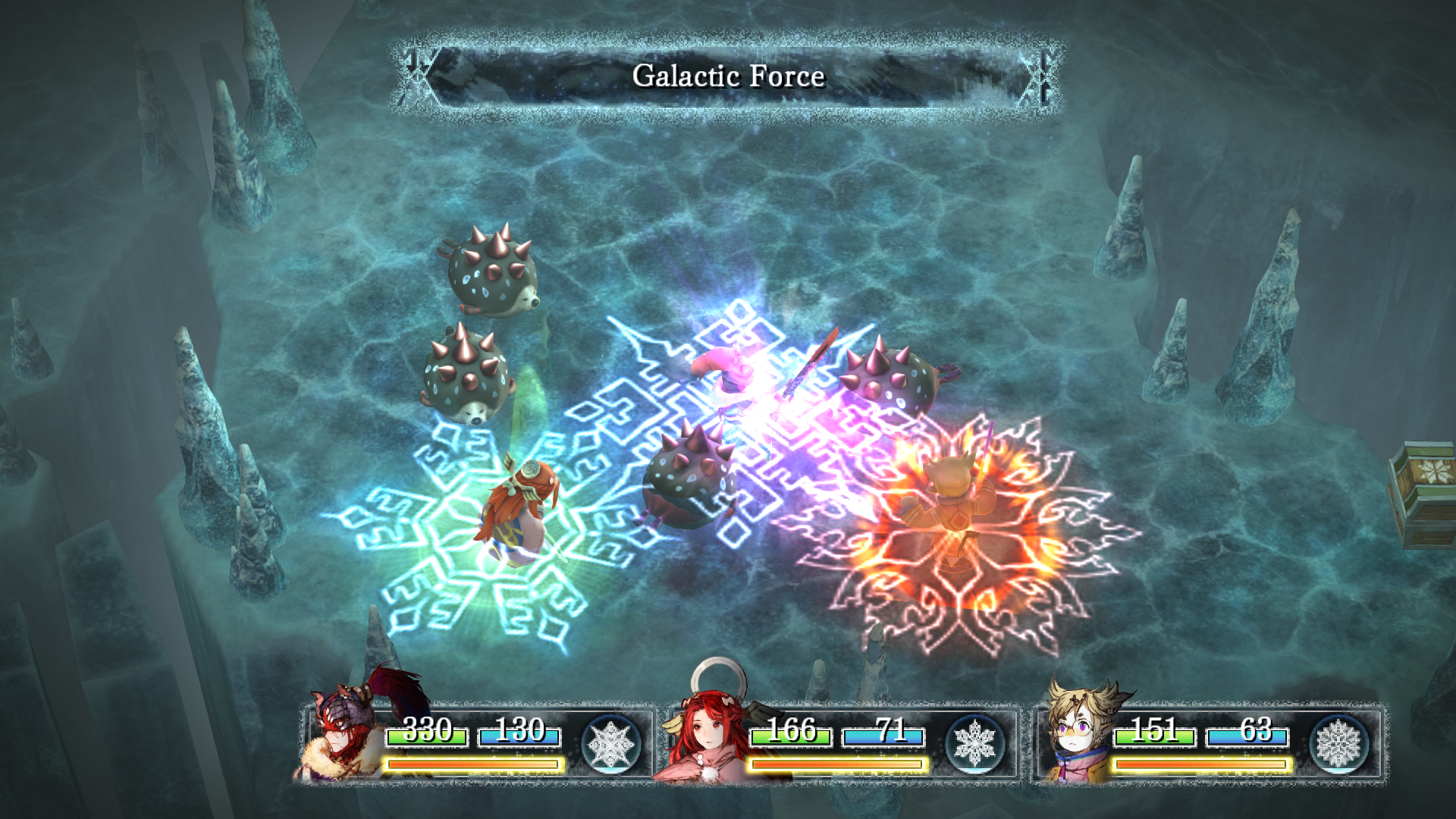 That said, I Am Setsuna does streamline a few typical RPG elements. You only have to worry about equipping two pieces of gear, for instance — a weapon and secondary amulet — which makes it easy to ensure that your team is as powerful as it can be. The are also some curious omissions. The game’s towns don’t have restorative inns for you to visit, so you’ll need to heal and empower your team after battles by using items and magic. You also don’t earn money after battles, but instead have to go through the often tedious process of selling off goods dropped by slain monsters.

The one obvious concession to modern players is the way I Am Setsuna looks. While it plays out as a 2D game, its world is rendered in beautiful three-dimensions. Unlike most globe-trotting fantasy epics, I Am Setsuna doesn’t really take place across a variety of disparate locals, but instead retains its gorgeous, wintery look throughout. The falling flakes, the paths that you can carve by walking through the snow, all make the otherwise static world feel vibrant and alive. It’s a grim and gray setting that suits the game’s solemn themes, and it’s punctuated by bursts of color, thanks to vibrant, creative character designs that make all of the main cast memorable and distinct. The presentation really is outstanding, from the art design to the soundtrack, which is dense with moody, stirring orchestrations. At one point I took a break to just stop and listen to the map theme, something I haven’t done since Chrono Cross came out in 1999.

I Am Setsuna is fairly short by JRPG standards; depending on how much grinding you do, it’ll probably take you somewhere around 20 hours to finish. But over that relatively brisk adventure, it gets at the heart of what made these kinds of games so beloved, with combat, narrative, and presentation that stand up with the best the genre has to offer.

And 20 years from now, I’ll probably still be listening to the soundtrack.

I Am Setsuna is available now on PlayStation 4 and PC.