'A huge leap in neuroscience of human brain'

You don’t have to be a neurosurgeon to know it’s hard to get to the right place without a good map. But neuroscientists have been blundering around with blurry brain maps, which sometimes aren’t very detailed, or omit important functions. That’s why a new map is so exciting — it shows nearly 100 areas that hadn’t been reported before.

The map, described in a study published today in Nature, is a detailed look at the part of the brain that handles all your senses, as well as your motion — plus some other functions like problem solving and emotional regulation. It’s called the cerebral cortex, and it’s the brain’s outer layer of nerve tissue. Think of it as "a sheet about the size of a large pizza, and about the thickness of the cardboard under the pizza," says David McCormick, a neuroscience and psychology professor at Yale. The map was assembled using data from the Human Connectome Project, an effort funded by the National Institutes of Health to better understand how the human brain works by compiling as much neural data as possible. 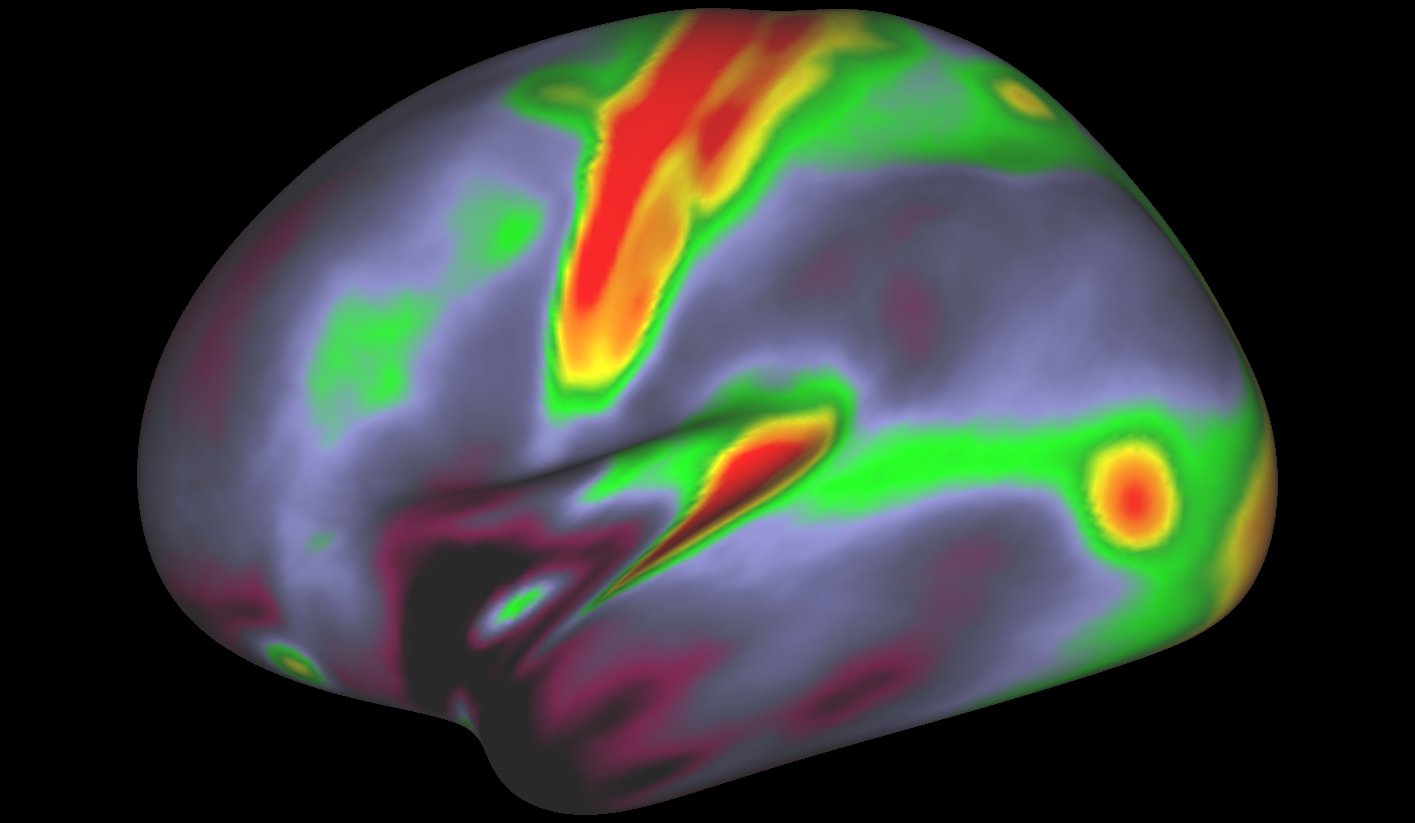 A map of myelin content (fatty insulation surrounding the brain’s nerves) in the left hemisphere of the cerebral cortex.

Putting together all that data helped identify these new areas. The cortex’s thickness, for instance, varies from brain region; in some places it is as thin as 1mm and in others, as thick as 4.5mm. Overlaying that with imaging that reveals the brain’s blood flow, called fMRI, and adding information about the fatty insulation surrounding the brain’s nerves let the researchers create new boundaries for brain areas, says study co-author Matthew Glasser, a neuroscientist working on his MD at Washington University. Anywhere two of these things changed together in the brain was where the neural cartographers put a new boundary.

Using this method, the researchers divided the human brain into 180 cortical areas, including 97 new ones. One of these regions, for example, is a big groove called POS2 that’s right in front of the visual cortex, which is the part of the brain that allows you to see. The researchers identified the area by looking at the fMRI data and noticing that POS2 stayed deactivated when the subjects were solving a math problem, but sprung into action when they relaxed. No one knows what it does, Glasser says. But that might be because no one’s known to look at it before. "What they found was about twice as many areas as was known, which is a huge leap in neuroscience of human brain," McCormick says.

Some, like Simon Eickhoff a neuropsychiatrist professor at Heinrich-Heine University Düsseldorf in Germany, dispute the novelty of these regions. For instance, some locations identified in today’s research had been documented before — just not in nearly as much detail. "I completely support the statement that they showed now in a systematic fashion, looking at the entire brain, using a multimodal approach, that there are subdivisions here and there and there," he says. "But I would be careful about calling these areas completely new."

The interpretation of fMRI data has also been called into question in other studies. The concern is that fMRIs can create false positives, skewing the statistical analysis researchers perform to identify the brain areas that are activated when performing particular tasks. But in this study, Glasser says, researchers made sure other features, such as cortex thickness and fatty insulation, corroborated the fMRI data before a new boundary was drawn. "One of the strengths of the study is that we’re making use of this corroboration," Glasser says. 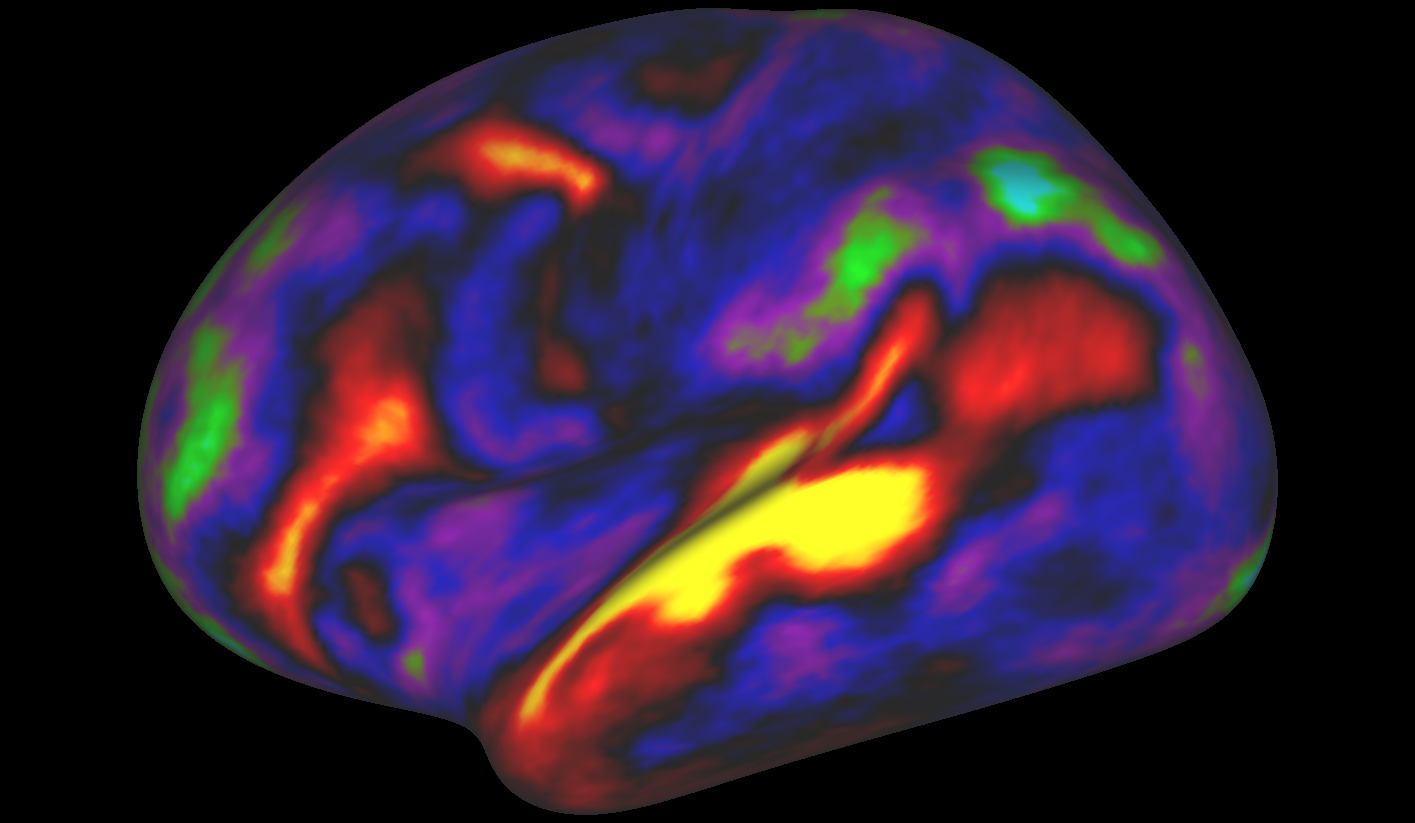 The pattern of brain activation (red, yellow) and deactivation (blue, green) in the left hemisphere when listening to stories while in the MRI scanner.

The map is mostly useful for future research efforts. The researchers trained a machine learning algorithm to be able to identify the fingerprints — like functions and connectivity — of the 180 cortical areas. Researchers will be able to use the algorithm to find the same areas in their own research subjects. The algorithm is for now 96.6 percent accurate — not good enough yet.

Despite that, the algorithm is very impressive, McCormick says. And it could help neuroscientists, neurosurgeons, and neurologists in their work and research. Down the line, the map could help researchers understand how people think and do things in different ways, by providing newly defined areas to study and helping consolidate knowledge we already have. "It’s going to help us understand amazing things about behavior and how the cortex underlies it," McCormick says.

Can we build a better brain?

A map of myelin content (fatty insulation surrounding the brain’s nerves) in the left hemisphere of the cerebral cortex.
Most Popular
From our sponsor
Advertiser Content From