Mr. Robot mastermind Sam Esmail has made a point of taking on nearly every creative role possible on his show, so it shouldn’t come as a surprise that when the idea came up for a virtual reality tie-in, he took the same hands-on approach. Debuting at Comic-Con, Mr. Robot VR is a 13-minute narrative experience written and directed by the auteur that takes viewers on a flashback journey with lead character Elliot Alderson (Rami Malek) as he remembers an early encounter with his dealer-turned-love-interest Shayla (Frankie Shaw). The result isn’t simply a VR technical demo; it’s a legitimate storytelling experience that captures the atmosphere and sensibilities of the show and brings it into an entirely new medium — and then pushes into territory that television would never allow.

“Sam is an old friend of mine. I knew him before he was writing television, and he knew me before I was big into virtual reality,” executive producer and creative consultant Chris Milk tells me. Milk has been one of virtual reality's pioneering voices in recent years, but at the moment he’s relaxing with a cup of wine inside the pop-up installation that serves as Mr. Robot's home base at Comic-Con. From the outside, the shop looks like a complete reproduction of the Mr. Robot computer store from the show; inside there's a dusty office, replete with display cases of used Commodore computers, video games, and circuit boards.

"I love trying to share things with really inventive and innovative filmmakers."

"The idea came about to do a Mr. Robot virtual reality project, and there was a natural connection," Milk says (his company Here Be Dragons — which up until recently was known as the VR house Vrse.works — produced the short). "It was an amazing experience, because I love trying to share things I’ve learned in this medium thus far with really inventive and innovative filmmakers in their own right. And it’s so fun to watch really talented people run up against the same walls that I’ve run up against, and try to figure out their own ways around them."

When I step behind the back curtain of the shop, I’m handed a Samsung Gear VR and set of headphones, then led into another secret room: a complete reproduction of Elliot’s apartment. The attention to detail is impressive; from the binder of burned CDs on the floor to the fried hard drives in the microwave, the environment feels pulled directly from the fabric of the show, but it’s ultimately all just stage setting for the VR experience itself. 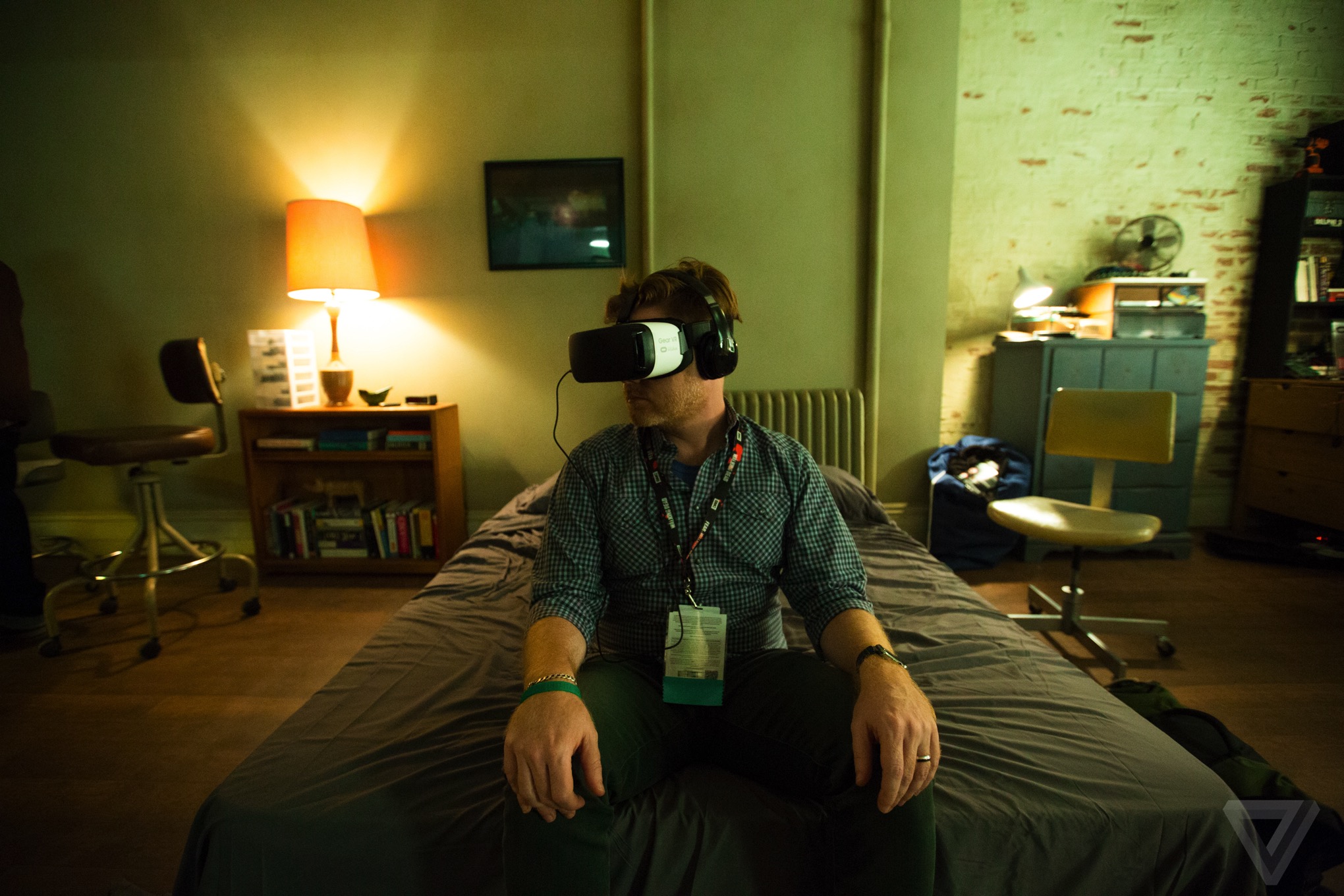 The short starts mildly enough: Elliot is in his apartment, addressing the viewer directly in the show’s trademark voiceover. There’s certainly a pleasant continuity in seeing Mailk recite Esmail's dialogue in a new context, but too many VR experiences still consist of just hanging out and watching somebody do something, often with a static camera. With a few deft choices, however, Esmail upends that expectation. When Elliot gets really high, the camera smoothly drifts to the ceiling; when he answers a knock at the door (even though he’s dreading it), the camera pulls the viewer inexorably forward with him. They’re subtle moves, but Esmail’s camera helps dictate the emotional mood of any given moment — even while the viewer can still look around in all directions like any 360-degree video experience.

Esmail’s secret weapon, of course, is the emotional connection fans of the show already have with its characters. If you’re caught up on Mr. Robot, there’s an inescapable melancholy in watching Elliot fumble on a would-be first date with Shayla. And when Esmail sets a scene in a ferris wheel car, it serves double duty: on one hand, it provides the VR-centric thrill of being in something that’s going very, very high in the air. But on the other, the close quarters force the viewer into looking at either Elliot or Shayla in tightly framed shots. It’s a VR close-up that feels uncomfortably intimate. Esmail uses that to build tension until he cuts to his characters goofing around on the boardwalk, laughing and chasing each other in a wider shot that evokes traditional, romanticized filmmaking just as Elliot lets his guard down.

If it sounds like I’m breaking this down more as a film than a technology "experience," that’s because I am. Its Gear VR presentation may be pixelated and its stitching imperfect, but there’s real voice in Esmail’s VR piece. It only becomes more apparent as the short leaves the trappings of reality behind entirely, visualizing the joy Elliot once felt with Shayla as a vibrant, abstract, neon dance party. Imagine one of those old iPod silhouette commercials run through a 360-degree kaleidoscope and you’ll get a sense of what it looks like, and being wrapped inside it is a moment of pure joy. 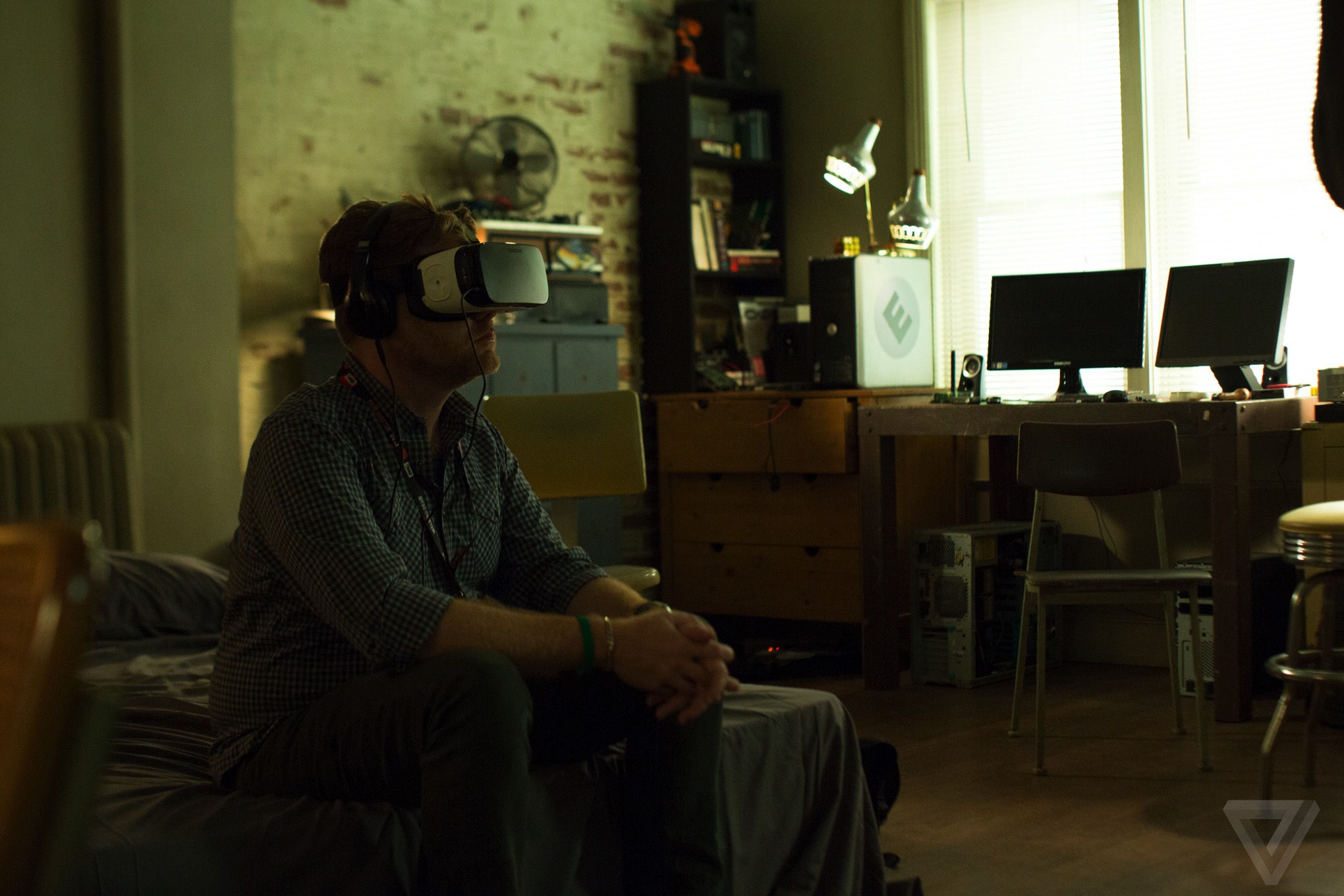 "I think Sam took a lot of risks," Milk says. "There are things where I said, ‘That might be aggressive for some people. Being that immersed; it could make you uncomfortable.'" But as producer, Milk says his goal was simply to inform his director what the impact would be — and then get out of the way. "Quentin Tarantino is going to do things that are different than what Spike Jonze might do in his film, but that doesn’t mean one is right and one is wrong," he explains. "It’s just the artistic voice of that filmmaker."

The Mr. Robot piece will playing at Comic-Con through the weekend, but wider audiences got a chance to watch it on Thursday, when it was briefly made available for viewing through Milk’s own Within app. It was the exact same moment that a crowd of fans experienced the short at Petco Park here in San Diego — but just as soon, it vanished from the app entirely.

"What I said to Sam was, remember when you wanted to see the season finale of Knight Rider? You had to be on the couch at 8PM on a Friday night, or you were shit out of luck, and all your friends were gonna talk about it at school." That pre-DVR appointment viewing experience was what they were aiming for, he says, and as a concept it's certainly in sync with Mr. Robot’s promotional campaign as a whole. Like the pilot leaks and other teases, the show's advertising has been full of quick flashes and moments of opportunity, aimed primarily at those paying attention.

Personally, I'm looking forward to Mr. Robot VR reaching beyond the confines of Comic-Con when it rolls out on multiple platforms on July 25th. It’s not just a matter of having a VR experience that enriches and expands upon an existing serialized story; it’s about a distinct creative voice trying new things in a new medium — and potentially inspiring others along the way.

The exterior of the pop-up shop in San Diego's Gaslamp Quarter.
Most Popular
From our sponsor
Advertiser Content From