The National Transportation Safety Board today issued the preliminary report of its investigation into the May 7th accident which involved a Tesla Model S operating in Autopilot mode. The crash resulted in the death of the driver, Joshua Brown, who was 40 years old. The agency found that Brown’s car was traveling nine miles over the posted speed limit at the time of the crash, and the report also includes the first officially released images of the accident.

Brown’s car was traveling at 74 miles per hour before it made impact with a tractor trailer that was crossing its path, according to the NTSB. The posted speed limit on the divided highway where the accident took place — US Highway 27A, near Williston, Florida — was 65 mph. The NTSB states findings don’t contain "any analysis of data" beyond that, and the agency says that probable cause has yet to be officially determined. Tesla has stated that a combination of the "high, white side of the box truck" and "a radar signature that would have looked very similar to an overhead sign" are what caused the car's automatic braking not to fire, but the company declined to comment on the NTSB's preliminary report.

Autopilot has speed limit restrictions, but only on certain roads

Autopilot is a self-driving mode that combines traffic-aware cruise control and lane-keeping technology. This past January Tesla released a software update to its cars that prohibited drivers from setting Autopilot to operate more than five miles per hour over the speed limit, but that "safety restriction" (as the company refers to it) only applies to "residential roads and roads without a center divider," according to the official release notes. 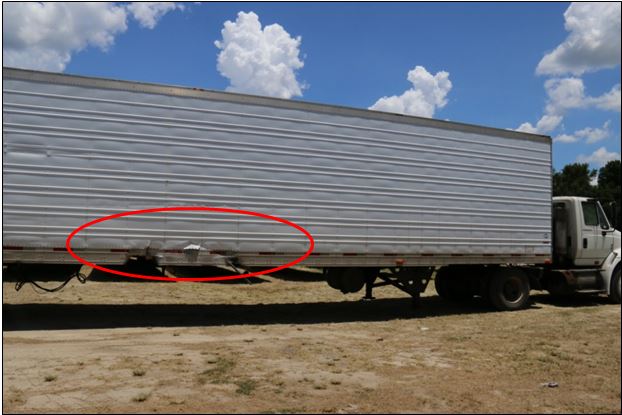 The NTSB also released three images of the accident, all of which help confirm things that were assumed about the crash since it became public last month. One image taken by the Florida Highway Patrol (seen at the top of this post) shows Brown’s Model S with its roof torn almost completely off, a result of impacting with the bottom of the tractor trailer. A second image (above) shows the damage to the truck. The NTSB says that Brown’s Model S struck the right side of the trailer about 23 feet from the back end, and that the "minor damage" to the truck was "consistent with a 90 degree angle of impact." The third image shows the intersection where the crash took place.

The NTSB sent five investigators to Williston, Florida earlier this month to gather evidence for its report. The agency says that "all aspects of the crash remain under investigation," and that it typically issues final reports about 12 months after publishing preliminary reports. Meanwhile, the National Highway Traffic Safety Administration is conducting its own investigation into Tesla’s autonomous safety features.