As the Obama administration nears its final months, the White House has released a framework for handling cyberattacks. The Presidential Policy Directive on United States Cyber Incident Coordination builds on the action plan that Obama laid out earlier this year, and it’s intended to create a clear standard of when and how government agencies will handle incidents. It also comes with a new threat level scale, assigning specific colors and response levels to the danger of a hack.

The cyberattack severity scale is somewhat vague, but it’s supposed to make sure that the agencies involved in cybersecurity — the Department of Justice, Department of Homeland Security, and Office of the Director of National Intelligence — respond to threats with the same level of urgency and investment. A Level One incident is "unlikely to impact public health or safety, national security, economic security, foreign relations, civil liberties, or public confidence," while a red Level Four one is "likely to result in a significant impact to public health or safety, national security, economic security, foreign relations, or civil liberties." One final designation — Level Five, or black — covers anything that "poses an imminent threat to the provision of wide-scale critical infrastructure services, national government stability, or to the lives of US persons." 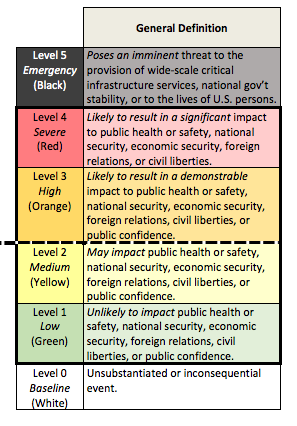 The upshot of this is that anything at Level Three or above will trigger a coordination effort to address the threat. In addition to the groups above, this effort will include the company, organization, or agency that was attacked.

Cybersecurity is a growing concern, and both Congress and the White House have spent the past several years pushing various frameworks for shoring it up. This includes a series of hotly debated bills that culminated in the Cyber Information Sharing Act, which has raised privacy questions as it’s been put into practice. At the same time, high-profile hacks have led to serious consequences for companies like Sony Pictures, Target, and Ashley Madison. Most recently, an unknown hacker or hackers — potentially linked to Russia — breached the Democratic National Committee’s servers, releasing large numbers of embarrassing documents and emails. This announcement doesn’t tell us exactly how the federal government will handle future cyberattacks, but along with everything else, it does signal that they’re becoming a more and more standard part of the security equation.