Here's how it will work

Two years after Apple launched its Family Sharing feature for iTunes apps and content, Google is finally doing the same thing with a feature it’s calling Google Play Family Library. Like Apple's plan, it's free, works with up to six different accounts, and lets you share movies, TV shows, books, and apps across multiple devices — and anybody in the family plan has the option to pay with the main account’s credit card.

The rollout begins today in the US and it’ll be available in Australia, Brazil, Canada, France, Germany, Ireland, Italy, Japan, Mexico, New Zealand, and the United Kingdom. The plan is related to (but not the same thing as) Google’s music streaming service for families, which costs $14.99 and is adding four more countries to its availability list today. 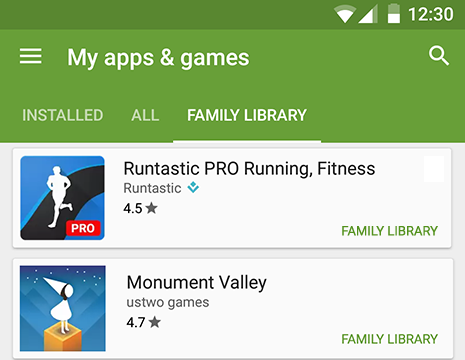 Google is adding a few granular controls to how its family sharing plan works. Individual users can choose to pay with their own card if they like — so your account owner won’t see that you’re overspending on Pokémon Go coins. Users can also choose whether or not to share certain content, there’s a default on / off switch for sharing and each individual piece of content will also have a toggle to enable or disable sharing.

But the biggest difference between Apple’s plan and Google’s is more straightforward, Google Play content is viewable on more kinds of devices. Movies and TV you buy in Google Play work on Android and ChromeOS devices, of course, but they’re also viewable on the web (technically, Google’s apps work best in the Chrome browser). They’ll also be viewable on iOS devices like the iPhone or iPad — but there's no native Apple TV app and Google doesn't allow for directly purchasing content inside iOS apps (no doubt because of Apple's 30 percent cut).

Even though it's late to the game, Google's play (sorry) is to make the case that you should buy your movies and shows on its stores because you'll be able to watch them in more places more easily. Thanks to availability on the web, the company is basically right. It's probably too much to expect that will cause anybody to change their purchasing habits these days, but at least Google is finally offering people already using its ecosystem the same sharing features that Apple users have enjoyed for the past couple of years.

Correction: an earlier version of this article included "purchased music" as one of the types of content that could be shared. That was incorrect, we regret the error.