Here's how startups are outsmarting Siri and Alexa

Here's how startups are outsmarting Siri and Alexa

Small companies are finding ways to compete in AI, even without big data

By Alex Brokaw and Ben Popper

Nearly every big tech company now offers a digital assistant powered by artificial intelligence. Apple has Siri, Facebook has M, Microsoft has Cortana, Amazon has Alexa, and Google has, well, Google. The success of these services is heavily dependent on the mountains of data they have at their disposal — along with massive amounts of computing power to crunch that data, understand user queries, and respond in real time.

This reality raises an obvious question: how can startups without their own server farms and massive customer bases hope to compete?

Companies like Hound and Viv want to build standalone apps that consumers will use in place of the assistants built into their smartphones. And companies like X.ai, Ozlo, EasilyDo, and Julie Desk are trying to carve out niches as dedicated helpers focused on single tasks like scheduling meetings or managing your inbox. These startups have advantages when it comes to getting started, primarily because many barriers to entering the industry have fallen.

Startups can win through focus

"I am very sanguine about the prospect for indie AI startups," says Anant Jhingran, the CTO of Apigee and a former VP at IBM, where he led the development team behind Watson.

API and open-source tools mean startups don’t have to waste resources on things like natural language processing or image recognition, Jhingran says. Computer power can be rented relatively cheaply from Amazon, Google, and others. Startups do face the daunting challenge of recruiting (and paying) top talent at a time when PhDs can easily find jobs at top companies. But according to Jhingran, "the number employed by these big companies is dwarfed by the number who are not." 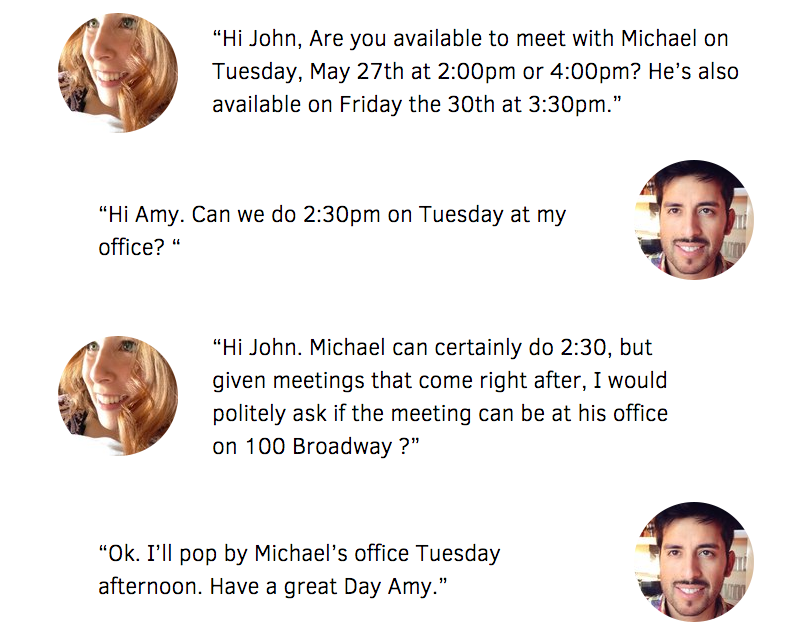 X.ai is one startup that’s taken advantage of this environment. Founded in 2014, it built an intelligent assistant (called "Amy Ingram") that helps two people schedule an appointment over email. Amy relies on Amazon Web services for its computing power. And X.ai’s team of 60 employees didn’t have to start from scratch when it came to understanding natural language. They built their AI using natural language processing techniques that had already been developed and disseminated throughout academia and the industry.

X.ai didn’t have billions of messages at its disposal to train Amy’s algorithms in the way that Google would have with GMail. But scheduling appointments using AI was an idea that no one had yet tackled aggressively — it was what is known as a "no-data problem," and so X.ai could gain an advantage even though it was starting from scratch.

You can't just throw data at the wall

"In a no-data setting, the playing field is largely evened out," says Dennis Mortensen, co-founder and CEO of X.ai. "This is why you see us being able to compete on meeting scheduling even though we do not run Gmail. Or perhaps a better example, why you see Google being able to compete with the automobile industry on self-driving cars, even though they only have about 60 cars on the road and GM has millions of cars with sensors on the road."

Startups also argue that they can win by focusing. Big companies have too many priorities to focus on a relatively narrow subject like appointment scheduling. But X.ai has assigned 60 people to work on the problem over the past two years, and the result is a product with more polish than a bigger company managed to produce in that time.

Mikael Berner, founder and CEO of EasilyDo, an intelligent assistant that tries to do everything from managing your email to updating you about flight times and package deliveries, agrees that there’s power in focus. "You can’t just take all the data in the world and throw it at something," says Berner. And that’s good news for startups like X.ai, which are targeting domains that Google, Facebook, and others aren’t.

EasilyDo falls into a different category: intelligent assistants that are taking on domains where the big players already have a stake. Google also surfaces flight information, for example, pulling departure times and delays from emails and presenting them in update cards in Gmail and Google Now. EasilyDo does the same thing, informing users about upcoming flights and delays through its app and pop-up notifications.

Humans are needed to help train AI, at least for now

"Google has so much more email data than we do," Berner says. But he still sees plenty of opportunity to beat big players in specific domains. EasilyDo outperforms the number of travel companies Google is able to recognize in emails, he says, spotting messages from 98 percent of all travel companies and 100 percent of the top level travel companies. Google declined to comment.

But Google still recognizes most important travel emails, including messages from major airlines like Delta and Southwest, and travel companies like Expedia and Orbitz. Does it matter if a startup is marginally better than Google or anyone else in a domain when the bigger player is good enough? It will likely depend on the domain, and on the quality of the user experience and suite of features that an indie AI can offer. (EasilyDo, for example, will manage your inbox and contacts and organize your bills and receipts in addition to offering travel assistance.)

"There’s going to be a lot of room for different types of systems," says Ozlo co-founder and CEO Charles Jolley, who was formerly head of product for Facebook’s mobile platform. Ozlo is an intelligent assistant that doesn’t perform tasks, but instead offers what Jolley called "expert advice" — product recommendations — in specific domains. Ozlo, which is still in beta, can only offer advice about restaurants at the moment, but Jolley says it's able to learn about any domain. Jolley believes that in the future we’ll use a wide variety of assistants — for work, for our personal lives, for giving us advice. "That’s how we differentiate, by offering different types of services that [the big players] aren’t really focused on and isn’t really part of their road map."

Focusing on a narrow vertical may be a more productive path than trying to take on the Siris of the world directly. "Any AI startup will have a hard time competing with broad or horizontal AI — particularly in the form of generalized assistants like Siri, Alexa, and Cortana," says X.ai’s Mortensen. "This is mostly due to the distribution challenges startups face. So, I agree that we (as startups) need to focus on highly specialized vertical AI's that do one job, but do that one job really well."

Viv appears to work much faster than its competitors

But startups offering direct alternatives to the big players’ standalone assistants still might have an advantage. Steve Chambers, CEO of Jibo, and 16-year veteran of Nuance (where he served as VP of the speech prediction department), agrees that small players can compete by focusing on narrow domains. But they can also gain an advantage by developing advanced techniques to power their IAs.

"At a high level, that’s principally whether a company deploys rule-based natural language understanding, or statistically derived and advanced natural language understanding, or a combination," Chambers says. In plain English: nothing precludes a startup from developing a novel approach to AI that deals with data in a faster and more precise way than big players’ AI’s, ultimately offering people a more useful product. This could give more general AI startups like Viv and Hound a fighting chance against their larger competitors.

On stage at Disrupt NY in March, Viv co-founder and CEO Dag Kittlaus demonstrated his company’s yet-to-be released intelligent assistant and explained how their "dynamic program generation" technique lets Viv (appear) to work much faster than its competitors. Kittlaus explained that Viv made a breakthrough in computer science that allows its AI to write its own programs based on natural-language queries, instead of requiring engineers to hand-code rules for each domain. This should make Viv much easier for developers to use, and for its platform to scale.

"It’s going to change the way programmers work with computers, because they are no longer required to actually teach the computer step by step, coding every single line," Kittlaus said on stage. "It’s a very important computer science breakthrough that our science department came up with, and we’re super excited about that."

The entire market is brand new

Kittlaus also sought to make neutrality one of the advantages an indie AI could offer. If a company like Samsung wanted a smart assistant baked into its next TV, or Honeywell wanted something similar in its thermostat, an indie may have an advantage, because they are free of the massive advertising networks and personal data sponges that companies like Google and Facebook have built. Just as Apple has tried to make privacy its differentiator in the battle of AI assistants, startups like Viv may benefit from being able to offer hardware partners and software developers a system that plays nicely with all the major cloud services consumers already use.

These are untested waters — for an entire industry. We’ve yet to see a game-changing intelligent assistant or bot from anyone, let alone a mainstream AI-powered helper that answers more than a basic query. Most AI startups are still stuck in beta. As the space gets more crowded, there will be mayhem — these services can be quite confusing to use. But given the tech industry’s huge interest in the field, it seems likely that an AI company will break out sooner or later. And it may find that starting small was the secret to getting big.