This awesome plane-train hybrid could revolutionize transportation, but not for another 50 years

This awesome plane-train hybrid could revolutionize transportation, but not for another 50 years

Imagine a future where a plane lands at an airfield that doubles as a rail yard. The cabin — one of three that cling to the underbelly of the aircraft like a baby possum to its mother — detaches, is seamlessly transferred to a nearby train, and then continues its journey toward the city center. Your multi-seat trip (taxi-to-subway-to-airtrain) from home to hotel suddenly becomes a one-seat, hassle-free ride. That’s the aim of a consortium of Swiss researchers with the conceptual Clip-Air, a bold-looking plane-train hybrid that despite its high-minded possibilities, will probably never get made.

In essence, Clip-Air is a modular aircraft in four parts. There are three cabins, or capsules, which can carry passengers, freight, or fuel. Then there's an aircraft, complete with cockpit and engines, which looks like a stealth bomber on stilts. The capsules can decouple from the aircraft to continue the journey by road or rail, depending on the mission. This would allow for quick rotations on the ground and enable operators to maximize the use of the airframe, the most expensive component. 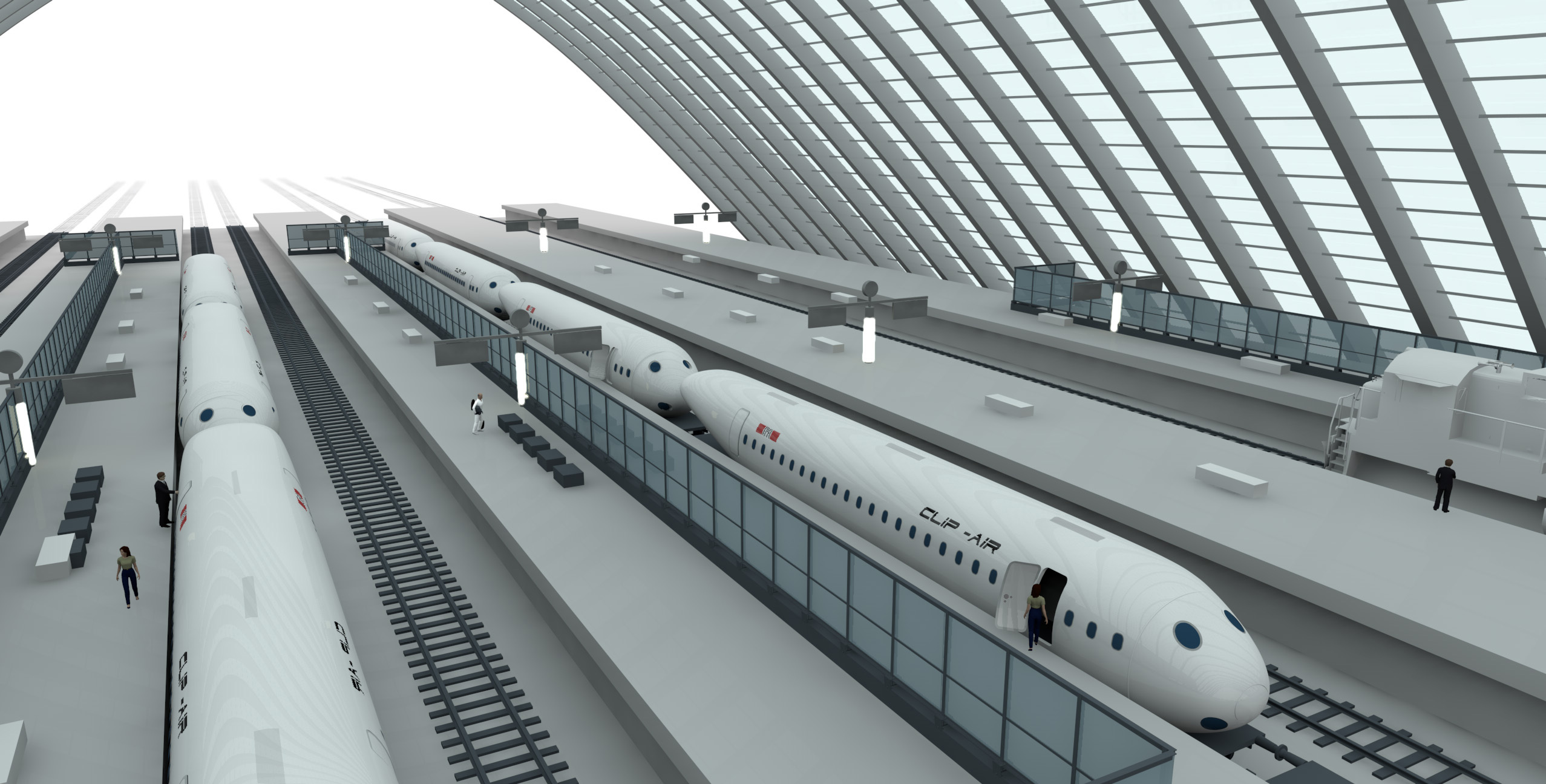 The wingspan is just shy of 200 feet, with the fuselage about half that. Each capsule can carry a maximum weight of 30 tons of cargo or 450 passengers, which is similar to an Airbus A320.

The consortium behind Clip-Air is led by the Swiss Federal Institute of Technology in Lausanne. And the researchers acknowledge this is not a concept that will be rolling off the assembly line anytime soon. "It would take between 40 and 50 years for Clip-Air to become operational using three capsules — a considerable amount of time," the group's website says. Indeed, Clip-Air is an "exploratory project... seeking to open new avenues of thought, regarding both the concept of commercial aviation and the use of existing technology, in order to fundamentally rethink tomorrow’s means of transportation."

The consortium wants to develop a prototype the size of a private plane in the next five to 10 years, and a more modest-sized prototype that could fit 150 passengers in 10 to 15 years. The three-capsule version would take up to 50 years to develop.

Clip-Air is the latest concept to imagine some combination of plane and train. The Aero Train was an idea put forward at the IEEE International Conference on Robotics and Automation in 2011, that envisioned a passenger plane flying very close to the ground. And the Horizon Mass Transit System theorized that an autonomous, electric plane could pick up maglev train cars while both were in motion. Add Clip-Air to the pile of groundbreaking transportation ideas that will find it difficult to get off the ground.