This is Huawei's first dual camera smartphone for the US

The Honor 8 was designed for millennials

Share All sharing options for: This is Huawei's first dual camera smartphone for the US

Earlier this summer, Huawei subsidiary Honor launched a new flagship phone in China, its key market. It's called the Honor 8, and it's a very nice-looking phone. It's not the flagship flagship — that's Huawei's P9 — but it's the top-of-the-line of the Honor series of phones. Now Huawei is bringing that phone to the US, as part of a growing effort to get a foothold in the US smartphone market.

The Honor 8 is a premium-feeling, glass-backed smartphone with a 5.2-inch full HD display and a dual camera system. The glass back is more for aesthetics than anything functional: Huawei says it's the result of 15 different steps in the manufacturing process, from coating to adding optical films to polishing, and that "no two devices look alike" because the reflective layer on top of the glass creates different light patterns on each phone.

It also has two 12MP rear cameras, one of which captures the image in RGB (color) while the other captures the image in monochrome. The two are processed simultaneously to create one photo, a supposedly better pic with more detail. Interestingly, the cameras are not branded Leica as they are on the P9, though they appear to be a very similar setup. Also present on the back of the phone is Huawei's super-fast fingerprint sensor, but in the Honor 8 it also doubles as a "smart key": you can program it to open specific apps or to take photos, depending on how many times or for how long you press it. 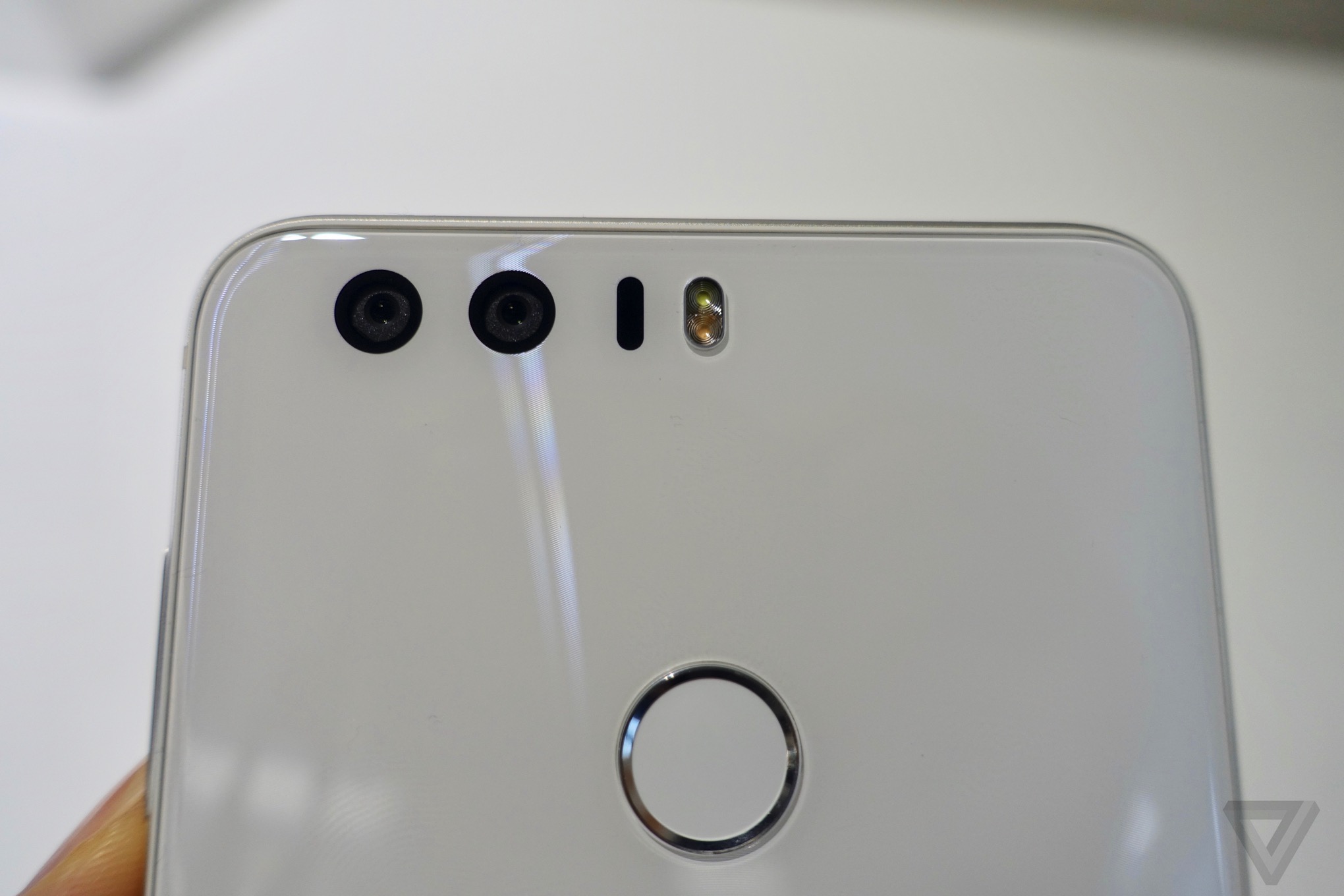 The Honor 8 will ship running Android Marshmallow. It has 4 gigabytes of RAM, a USB Type-C port for fast charging, a 3.5mm headphone jack, and a 3,000 mAh battery. It comes in two configurations, one with 32GB of storage and one with 64GB, with a microSD slot for expansion. Huawei says the phone, which goes on sale tomorrow, will ship by the end of the month.

During a pre-briefing and short demo, Huawei executives stressed that this phone is aimed at millennials, to the point where I wondered if the smartphone might spontaneously combust if it fell into the hands of someone born before 1982. Huawei says millennials like to hold their phones in one hand. They like to use voice command and say "Cheese!" in order to snap a photo. They like 17 different camera modes, manual photo settings and plenty of filters. The light refractions on the glass back are meant to suit the fickle needs of millennials, who insist on having their phones stand out in a crowd.

Huawei didn't reveal pricing during our pre-brief (maybe millennials don't care about that as much?) but at an event in San Francisco tonight said the Honor 8 would start at $400 for the 32GB model and go up to $450 for the 64GB model. That puts it at a higher price than it is in the Chinese market — in China it starts at around $300 and goes up to $370 USD — and it's more costly than some other unlocked Android phones in the US, like Google's Nexus 5X and the Nextbit Robin. But for what Huawei is labeling a flagship, it still falls into the "affordable" category.

This post has been updated to include pricing information.