Antoine Routon came to Square Enix Montreal to work on the next big Hitman game. He was one of the first employees at the studio, which was founded in 2011 with the intention of building big-budget blockbusters — but that all changed after less than a year. During that time, parent company Square Enix assessed its studios in Europe and North America, and realized that none were focused on the booming market of mobile gaming. Leadership decided that the young Montreal studio would refocus on smaller games for smaller screens. “I remember the day the news was announced, a lot of people’s faces were really disappointed,” says Routon.

While many people left, preferring instead to take new jobs working on blockbusters, others, like Routon, saw the news as a challenge. Those who remained split into small teams and spent two weeks prototyping ideas that they would then pitch to higher-ups. There were only two restrictions on those ideas: they had to be mobile, and they had to be Hitman. Routon, a programmer by trade, partnered with designer Daniel Lutz who had a wild idea to turn the stealth assassination series into a turn-based board game. The pair spent those two weeks tinkering with yarn, paper, and plastic pieces from existing board games, before settling on the earliest version of what would become the surprise 2014 hit Hitman Go.

The studio then followed that up with a similarly successful game based on Tomb Raider, and today sees the launch of another turned-based adventure, this time set in the cyberpunk future of Deus Ex. With the Go series, Square Enix Montreal has carved out its own niche, creating something unique in the game development space. Studios often fall into one of two camps: on the one side you have the massive, 1,000-person teams that create blockbuster games, and on the other there are the tiny indie studios that build creatively ambitious games with few resources. Square Enix Montreal straddles the line between those two extremes. It has the resources of a big company, but the size and some of the creative freedom of an indie. It’s a studio that can make weird new games but attach them to hugely popular franchises.

“The only reason why we can act this way is because we’re small,” says Routon. “Our way of working wouldn’t work if we were massive.” 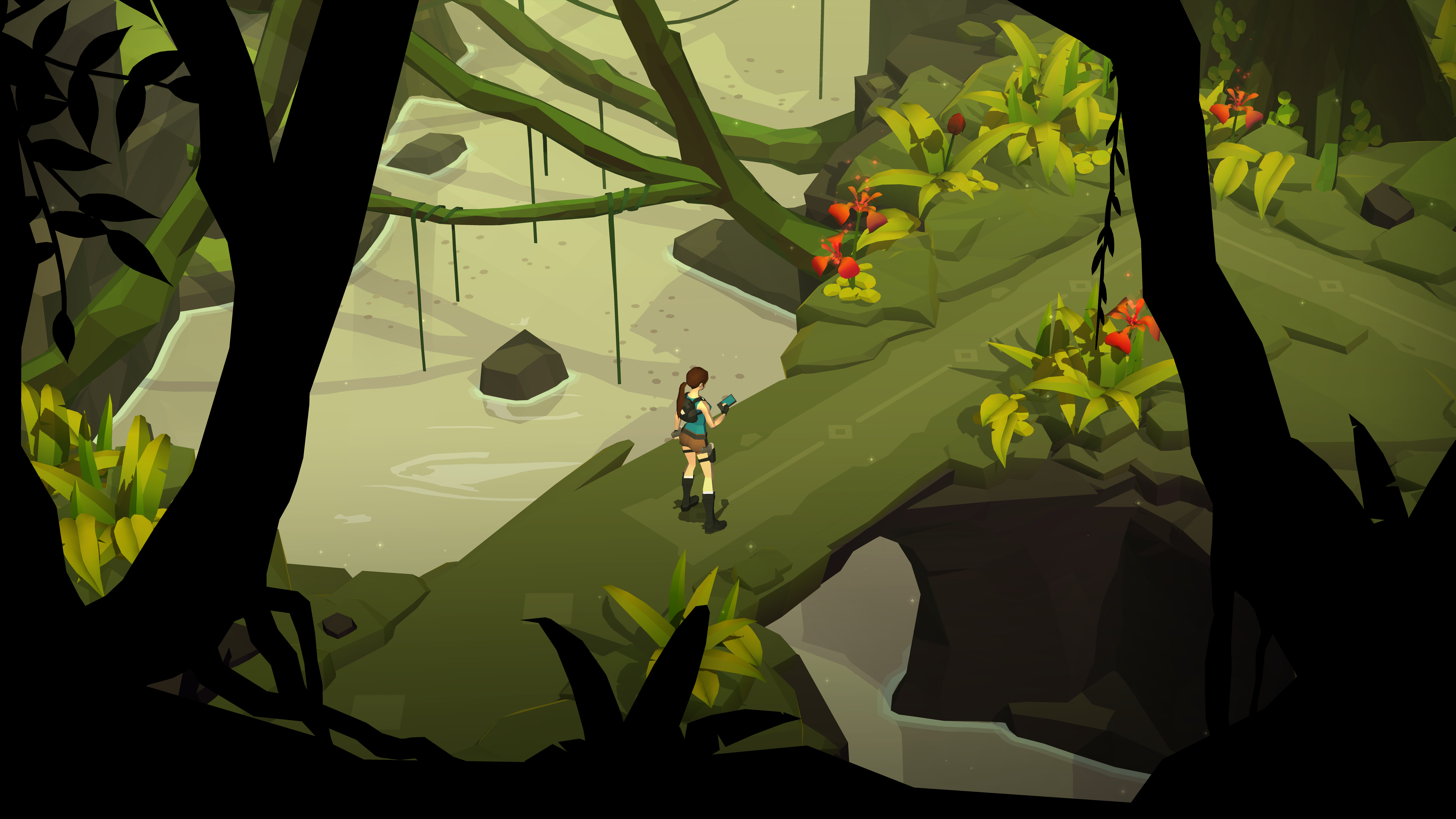 This dichotomy is clear in the studio itself. Walking into Square Enix Montreal is much like any large studio at first — white walls, similar-looking desks, and cardboard cutouts of famous video game characters — aside from the fact that it’s mostly empty. Square Enix Montreal was originally built to accommodate a team of a few hundred people, but is currently home to around 40, who cluster together on one side of the office alongside a massive window with a fantastic view of Mount Royal.

"Hitman Go was really a turning point for me personally, and the studio."

Square Enix Montreal is also different from most big studios — often called AAA studios in industry-speak — in that everyone, no matter their specialty, is forced to contribute in multiple ways. Programmers help with design, and designers pitch ideas for art. It’s a lot like an indie studio in that way, also far removed from the AAA space, which typically places developers into very specific roles. Before coming to Square Enix Montreal, Routon wasn’t just a programmer, he was an animation programmer. "It was so specific," he says. "And then I had to [learn to] do everything… We can’t have experts anymore. We can’t have people who are experts in something and work in silos. Because we’re so small we need people who have one or two [areas of expertise], and wide breadths of interests and skills."

Along with this surge of collaboration, or de-siloing, a bonding effect filled the void of the departures. "I think for the people that stayed, it brought us closer," says Routon. "There was a sense that this is what we want to do, and it’s exciting. Hitman Go was really a turning point for me personally, and the studio."

The game’s success was followed by Lara Croft Go in 2015, which similarly took the core basics of a popular franchise — in this case, Lara’s acrobatics and exploration skills — and transformed them into a slick, turn-based puzzle game that worked perfectly on a phone or tablet. Both games racked up awards and modest sales, and Hitman Go was even ported to devices like the PlayStation 4 and Oculus Rift. Whereas many companies release rushed, free-to-play mobile tie-ins to coincide with the release of big console games, Square Enix was doing something very different, dedicating an entire studio to making more crafted experiences designed to evoke the same kind of feelings as their console counterparts, but on a smaller scale.

While the Go games racked up the accolades, and helped establish Square Enix Montreal as a mobile studio worth watching, it was actually another game that kept the development house going financially. Hitman Go wasn’t the only prototype to come out of that two-week game jam; it was soon followed by the release of Hitman Sniper, a much more traditional kind of mobile game. "Nobody talks about Sniper," says Square Enix Montreal brand manager Geneviève St-Onge. "But the truth is that it’s the game that’s pulling in the most revenue. It’s driving us to keep making games, essentially."

Like Routon, Dominic Allaire has been at the studio since its earliest days, and was excited about the prospect of switching from console to mobile. "For me as a producer, I was excited about the challenge of being out of my comfort zone," he says. Allaire is the producer on Sniper, a game which changed a great deal from inception to release. What was originally envisioned as massive, premium game — the kind of iPad experience that would set you back $20 or so — it was later adapted into a free-to-play experience, before the team settled on something in between. It’s a $5 game with beautiful 3D graphics, an experience that’s constantly being updated with new features and content, much like a free game. Whereas Hitman Go reimagined the franchise in a new context, Sniper takes a very specific part — taking out marks through the scope of a sniper rifle — and fleshes it out into a competitive multiplayer game.

The two Hitman games came out of the same studio, but were extremely different. On one side, you had the critically acclaimed Go, which was a carefully crafted game designed to last for a finite amount of time. Sniper, on the other hand, was a lucrative, ongoing experience with a structure that tried to keep players engaged indefinitely. On one side you had the indie way of thinking, on the other the AAA way. And there was friction. "There was a clear culture clash," says St-Onge. "Not negative, but just different approaches. This duality in culture made it more difficult to determine who we are and what our values are."

"There was a clear culture clash."

Deus Ex Go is an attempt to resolve those differences and make a more unified studio — and hopefully create a better game in the process. Half of the Deus Ex Go team comes from the Sniper side, while the other half is made up of people who worked on the Go series. "One of our objectives was to mix-and-match those teams," says Allaire. The goal is to make a game with the tight, hand-crafted feel of the Go series, but with the ongoing updates of Sniper. In addition to its main campaign, Deus Ex Go will also feature new puzzles released every weekday for the foreseeable future. Designer Étienne Giroux likens it to The New York Times crossword puzzle. "Every day a new puzzle unlocks," he says, "and Friday is the really hard one."

The relatively short length of the Go games has been an ongoing complaint from players, and it’s something the team wanted to fix with Deus Ex Go. (The game will also eventually feature a level editor so players can build and share their own puzzles.) "Making new levels for Lara Croft Go was super interesting, but it took months to create 30 levels," says Giroux. "[For Deus Ex Go] we built the system in a way that it wouldn’t be so time consuming to make them." That includes a new editor that is able to generate puzzles without the need for an artist, which was one of the more time-consuming aspects of the previous games.

Square Enix Montreal is a unique studio, but in a lot of ways it’s also in-keeping with Square’s desire to have individual studios focus on the one specific thing they’re good at, whatever that may be. Most recently, the company released I Am Setsuna, a classic-style Japanese RPG from a similarly small team dubbed Tokyo RPG Factory, built with the express purpose of building those kinds of old-school experiences.

Outside of Deus Ex Go, Square Enix Montreal isn’t saying what it’s working on right now. But the studio has made a few recent hires that hint at desire to keep the indie-like feeling it has carefully cultivated. Those pick-ups include Teddy Dief, an artist and designer best known for his work on the crowdfunded hit Hyper Light Drifter, and Renaud Bédard, the sole programmer on seminal puzzle-platformer Fez, who most recently worked at Below developer Capy Games in Toronto. Both were tempted to join by the idea of combining the creative freedom of an indie studio with the structure and resources of a big publisher.

"There was a lot of confidence in what we can achieve."

"I wasn’t looking to take a job after we did Hyper Light Drifter," says Dief. "I was just going to do the next thing, and float around, and find some new collaborators." He previously worked at both Microsoft Studios and Disney, but spent the past four years as a full-time indie. There were some adjustments coming to Square Enix Montreal. Dief says he spent his first few weeks at Square Enix Montreal rearranging furniture to improve the creative energy, and he’s particularly worried about his first Canadian winter. But he notes that it hasn’t been a major change creatively.

"I have not encountered anything in the two months I’ve been here that has forced my hand to make a decision I didn’t want to make. In that sense, I have felt very free," he says. "The team here that created the Go games created a niche for themselves, and there’s just no reason to disrupt that. There’s a reason to grow it, and explore new places with it, and see where it goes next." Bédard echoes those thoughts, saying "There was a lot of confidence in what we can achieve. So we do have a lot of creative freedom to just come up with something cool."

For those early employees who decided to stick with Square Enix Montreal through a relatively turbulent time of change, those statements are a form of validation. While sales and awards are great, the admiration of their peers is perhaps even more important, and having notable indies like Dief and Bédard not only want to join the studio, but feel at home once they’re there, is a great example of that. Whatever comes next, it’s clear that — much like the board game-like take on Hitman that set everything in motion — it likely won’t be what you expect.

"Nothing that’s worth making is obvious," says Routon.