Instagram's new stories are a near-perfect copy of Snapchat stories

Instagram's new stories are a near-perfect copy of Snapchat stories

In a bold expansion designed to capture more of users’ everyday photos and videos, Instagram today introduced "stories," a secondary feed of ephemeral content that is available for only 24 hours from the time of posting. The feature is nearly identical to the central feed in Snapchat, which is also called stories and which helped supercharge the company’s growth rate after it was introduced in 2013. Encouraging users to post more frequently — and more candidly — about their lives, Instagram’s introduction of stories could fundamentally change the nature of an app that has 300 million daily users.

Stories, which rolls out today on Android and iOS, places a new row of circular avatars at the top of your Instagram feed. Each bubble represents an account that you follow on Instagram, and contains every photo and video clip (up to 10 seconds) that they've posted to their stories feed within the past day. (The avatars are displayed according to an algorithm that attempts to show your favorite accounts first.) Tap a bubble and their story will open in full screen, advancing automatically with a slick rotating cube effect. Unlike Snapchat, you can tap on the left-hand side of the screen to rewind the feed back to an earlier post.

Unlike the main feed, there are no hearts or other feedback mechanisms inside Instagram stories. But as on Snapchat, you can reply to stories with text messages — here they'll appear inside the Instagram Direct mailbox. Swipe up on your own story and you can see a list of people who have viewed your story; you can also block individual users from being able to access your story on that screen. If your Instagram account is public, your story is public, too — and you can creep on someone’s public story without following them by tapping on their profile photo. If your account is private, though, only accounts you approve can see it. And if you're particularly satisfied with one of your story posts, you can promote it to the traditional Instagram feed by swiping up on it and tapping the share button.

To create a post for your public story, you tap a new stylized "+" icon at the top left-hand corner of the screen. (Linking the feature to the main camera confused people about where an image would show up, the company says.) Or you can reveal the story camera by simply swiping left. It’s a bizarro-world version of the Snapchat camera that lets you post text and resize it with your fingers, or draw in a variety of colors. Instagram’s story camera includes three drawing tools: a normal pen, a highlighter that lets you emphasize text by coloring beneath it, and a "neon pen" that draws in white with neon color borders.

There are also a handful of simple color filters, though unlike the main camera, these ones don’t have names. And while Instagram stories managed to ship the basic features of Snapchat stories in version 1.0, so far there are no face filters, geofilters, time stamps, or weather and speed gauges. (The company wouldn’t say which of these features may be coming, but face filters seem like a sure thing, given their popularity and the recent acquisition of video filter app MSQRD by Instagram’s parent company, Facebook.)

An effort to boost sharing

Introduced nearly six years ago, Instagram thrived initially by helping users improve the photos they took with their under-powered smartphone cameras and share them seamlessly on Facebook, Twitter, and elsewhere. The app’s trademark filters allowed amateurs to make everyday images look beautiful with just a few taps. Over time, Instagram became synonymous with artfully posed, aspirational photos of everyday life. That helped turn the app into a powerful advertising platform that is expected to generate $1.5 billion this year, according to eMarketer.

At the same time, Instagram’s reputation as the home for your glamour shots has raised the psychological bar for posting a photo there. It’s not unusual for some users to post no more than once a week, or even once a month. Meanwhile, Snapchat developed a product that allows users to share frequent, candid snapshots of their days without worrying that they’re spamming friends, or leaving behind a public archive of photos that could come back to haunt them later.

Instagram describes its stories product as a way to promote the sharing of moments that don’t meet the higher bar of a traditional Instagram post. But it’s also designed to get people to share more, period. The Information reported in June that the average number of Instagram posts per user declined between 2013 and 2015. Meanwhile, consumption of video alone on Snapchat increased 25 percent between February and April, to 10 billion views a day, according to Bloomberg.

Given those trends, it’s easy to imagine why Instagram would want to encourage users to be less fussy about their posts. But even in an industry where building on others’ successes is the norm, Instagram’s copy-paste take on Snapchat stories stands out for its sheer brazenness. 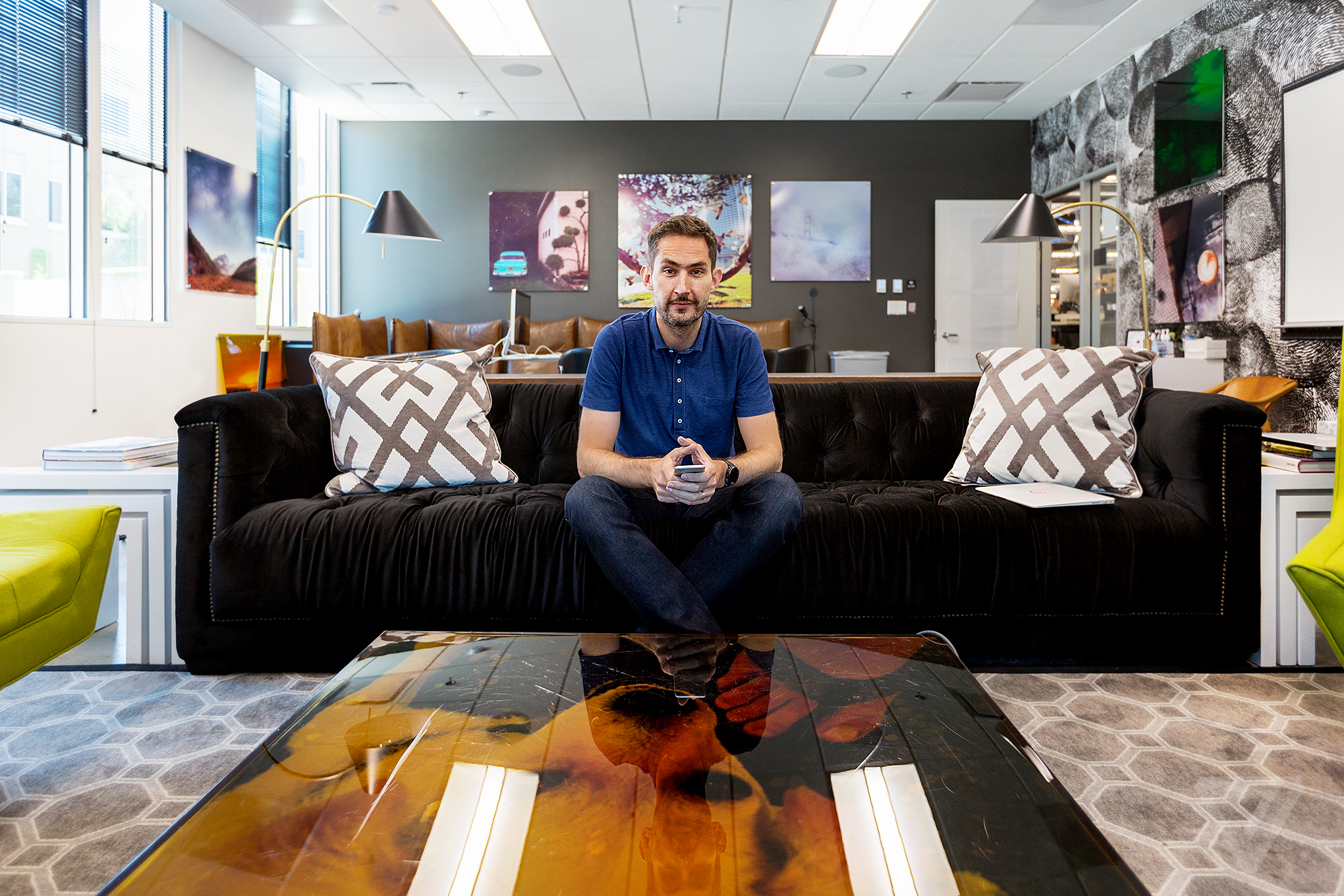 Kevin Systrom, Instagram’s co-founder and CEO, credits Snapchat for developing the stories format. But he says it was always bound to surface in other apps. "My thesis is a story is a slideshow format," Systrom said in an interview with The Verge. "Just like when Facebook invented the [News] Feed, and every social product was like, ‘That’s an innovation, how do we adapt that to our network?’ You’re going to see stories pop up in other networks over time, because it’s one of the best ways to show visual information in chronological order."

Adding a feed of ephemeral stories allows Instagram to showcase both the glamorous and the mundane, Systrom said. "If Instagram is built around highlights, we’re filling in the space in between — and becoming more about visual expression in general," he said. "We’re capturing all the world’s moments, not just the best ones."

A focus on Snapchat

It’s not the first time that Instagram or its parent company has taken a page from Snapchat’s product roadmap. In 2012 Facebook released Poke, an app for sending messages that disappeared after 10 seconds. It never gained much traction, and was shuttered in 2014. Later that year Facebook released Slingshot, which required you to send a friend a photo of your own before you could see the photo they had sent you. It fizzled, too.

In 2014 Instagram released Bolt, its own ephemeral messenger, which tried to build intimacy by limiting your network to 20 friends. But users stayed away, and Instagram later pulled Bolt from the App Store.

But if ephemeral messaging has been a dead end for Facebook and Instagram, Systrom is betting that ephemeral broadcasts have more potential. Giving users new ways to express themselves to an existing audience will transform the way people think of Instagram, he said. "People feel like there are all these rules in main feed," Systrom said. "Now we get to experiment with a bunch of different creativity in this new format that I think people are pretty hungry for."

If Instagram stories are the direct descendant of Snapchat, they’re also the cousin of the "finstagram" — secondary, private Instagram accounts that are used to showcase silly, unflattering, or otherwise not-meant-for-public-consumption photos. Users often delete the photos they share there over time — a kind of do-it-yourself take on the Snapchat story. The phenomenon first gained notice around 2013, about a year after Snapchat’s rise began. Finstagrams have been particularly popular with young women, who have used them to share more candid photos than they would otherwise post to the service.

Instagram conducted research with teenagers who created "finstas," and learned that they served a variety of functions: allowing teens to feel comfortable posting more frequently, more candidly, and to a closer group of friends. Instagram’s first response to the phenomenon was to introduce fast account switching. But stories will go further to encourage sharing, Systrom said. "I think it is going to be a much more seamless solution that doesn’t have you hopping between accounts and remembering ‘Where am I, what account am I in?’"

"There are a lot of people that don’t use Snapchat yet around the world."

Strategically, it’s hard to argue with Instagram’s introduction of stories. It’s a ruthless effort to increase sharing on its own platform at the expense of Snapchat’s future growth, using the very tools that Snapchat invented. But there are risks here as well. The goofy, anything-goes stream of content that’s so charming on Snapchat might feel alien inside Instagram, even when it’s housed in a feed of its own. And Instagram users, suspicious of the company’s motives, could spurn stories like a host rejecting an organ transplant. The problem with Instagram stories today is that there simply isn’t very much Instagram in them.

Last month, in an interview with The Hollywood Reporter, Systrom made what I thought was a dig at Snapchat. "If you want to take a simple photo that you don’t really want to remember and post it to have your friends not see it after, there are great networks for that," he said. But when I asked him about it in light of today’s news, he said I had misread him. "Don’t take that as a negative comment," he said. "There are photos that I don’t want to remember, that I don’t want to live on my camera roll. There are great networks for that, and that doesn’t mean Instagram can’t also be a great network for that.

"There are a lot of people that don’t use Snapchat yet around the world," he continued. "We have over 500 million people using Instagram every month, 300 million dailies, and more than 80 percent [of them are] outside of the US. I think there’s a giant market for moments like this, and I think Instagram can be one of the first to bring it to them."