What wireless earbuds will ruin about youth

What wireless earbuds will ruin about youth

Much like Anne Hathaway's character in The Devil Wears Prada, who gets ripped to shreds for thinking high fashion has nothing to do with her bargain bin life, I am a trickle-down consumer who cannot be bothered.

I've never considered a single tech press event to be relevant to my life. My first smartphone was an already-outdated iPhone 5C in the summer of 2014; the most expensive pair of headphones I've ever owned was $19.99; and I didn't know how to make a GIF until I got hired at The Verge. It's nothing to be especially proud of, but it's just how I live. I trust that the market will get me there eventually, and it does.

i have a question about the headphone jack. yes, me!

But this time it's different. Amid all of last week's nebulous questions about whether Apple is getting rid of the headphone jack so it can decide what audio you can play on your phone, and if you'll be able to charge your phone while you listen to music, and how headphones manufacturers will fare in the new headphone-jack-less age, the only true consensus was on the point that this transition will usher in the age of ubiquitous wireless headphones. Apple's AirPods aren't the first truly wireless earbuds, but the iPhone 7 is the first device that more or less explicitly demands them.

No more wires getting tangled up in your backpack or your scarf or your cat's mouth. No more plugging and unplugging, wrapping and unwrapping. These were minor inconveniences, but of course tech is about eliminating all inconvenience.

Here's my question: what will happen to the simple, lovely intimacy of sharing a pair of earbuds with your crush? Sure, you can split a pair of wireless buds just as easily, but there will be no reason for your shoulders to touch! No rubbery thread tying you together however briefly for the whole world to see! No heads tilting imperceptibly closer. No accommodating height differences with slouches and / or tiptoes.

We've mourned the loss of the phrase "pass the aux," (and celebrated its brief revival at Madison Square Garden this winter), but there's an easy replacement for it that doesn't sacrifice anything meaningful. Just, you know "unpair your phone, dude, I wanna play something." Here we're losing something physical — a cable connecting two people. An easy intimacy with very few equivalents. 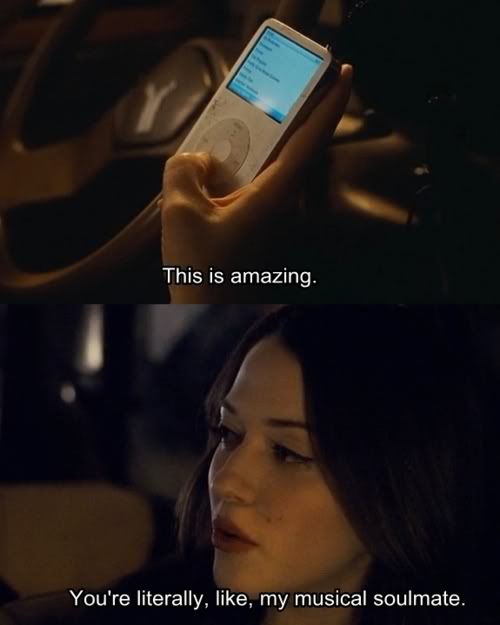 How will the teens do romance? There has to be something subtle, a low-risk move involving shared tunes that exists somewhere between the nonsense ambiguity of Snapchatting a verse from "Total Eclipse of the Heart" in the old man voice-changer filter and the all-on-the-line, borderline reckless boombox move. Offering an earbud has been the gesture existing in that space for as long as I can remember. We need it — for love!

A nice compromise might be the fairly inoffensive Beats X neckbuds, which don't plug into your device but do retain a wire connecting the two buds. However, they're $149.95 and puppy love should be anyone's for the $4.95 it costs to pick up a generic version of the industry standard at Duane Reade. If truly wireless buds become that standard, it's going to be a sad day for romance.

I'm glad I got to have most of my youth before this travesty. Also before the Earth crumbles into the Sun and there is no one left living who recalls the original Jurassic Park and denim goes completely out of style for good and Bruce Springsteen dies. But mostly the earbuds thing.