Though it's the first electric car that is both affordable and has a range over 200 miles, the Chevy Bolt is almost aggressively normal. Slipping into the driver's seat, it feels like any number of other cars I've driven. There's a steering wheel, a couple of pedals, a shift knob, and all the other stuff one expects from a car built in 2016. The only hint to the high-tech infrastructure hiding beneath the floor is the complete lack of noise when I hit the power button.

Last week, I drove a preproduction Chevy Bolt down the gorgeous California coastline from Monterey to Santa Barbara on a mix of city, highway, and rural roads. The idea was to show reporters how the car can easily meet its EPA-estimated 238-mile range. It did, with room to spare. That was to be expected of course — but what I really wanted to know was how the Bolt was as a car.

Buyers of the first few generations of hybrids (mainly the Toyota Prius) were looking to make a statement: I'm greener than you. But at some point, buying a hybrid stopped being something weird and turned into just buying a car. The first few generations of electric cars were also about making a statement. But could the Chevy Bolt, with its affordable price (around $30,000 after a federal tax credit) and 238-mile range, turn electric vehicles from something weird into just another car? 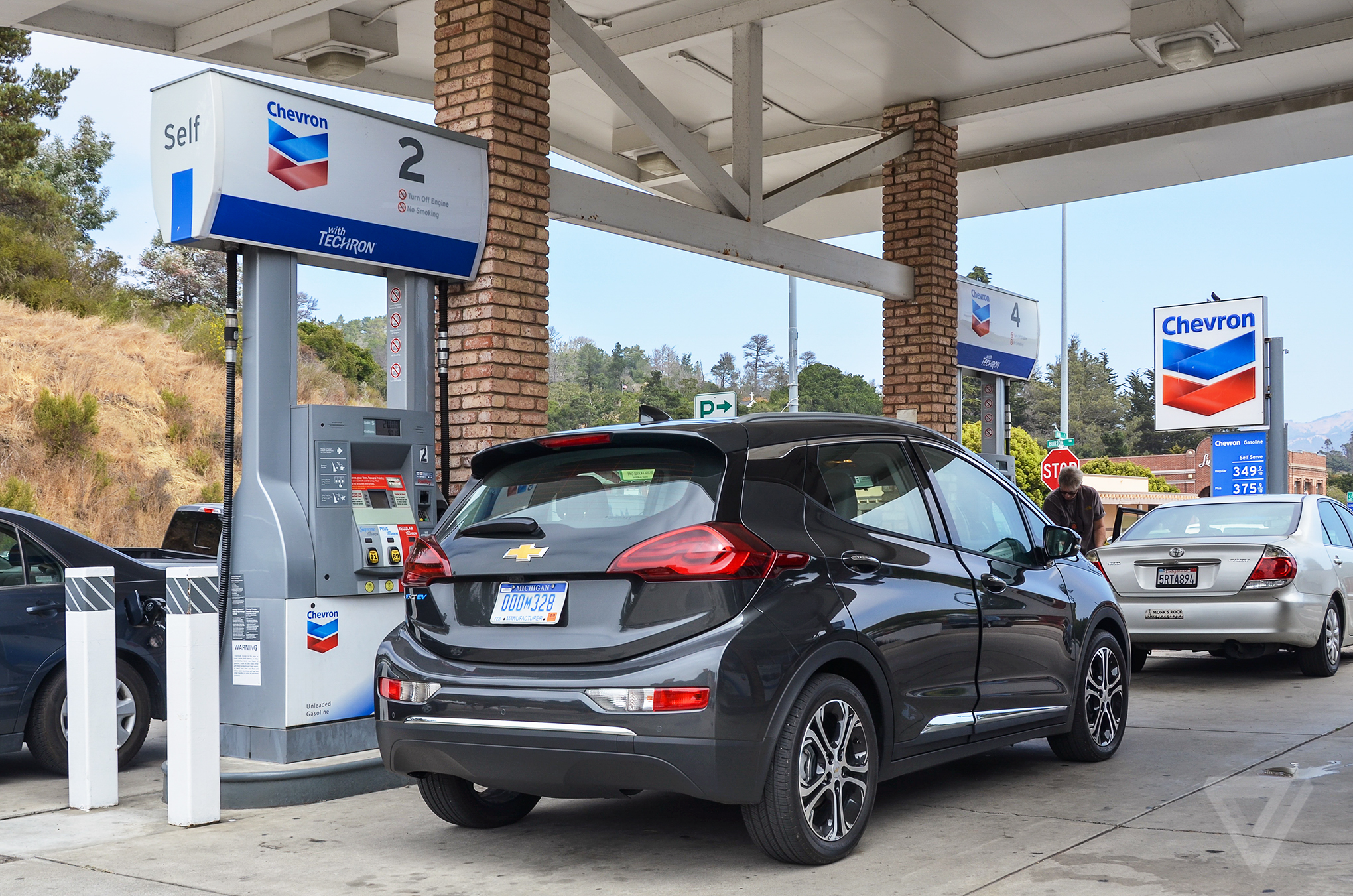 Until the Chevy Bolt came along, buying an EV meant making a sacrifice. Either you picked something like the Nissan Leaf that couldn't really drive very far on a charge or you got a Tesla that was terrific but very expensive. Thus far, EV's have only been purchased by enthusiasts. The Chevy Bolt is meant to change all that, though it's going to be an uphill climb to convince the average buyer to even consider an electric car.

Members of Chevy's electric car marketing teams (responsible for both the plug-in hybrid Volt and the all-electric Bolt) told me that they were continually surprised that so many customers were clueless about how electric cars worked. I heard stories of customers in focus groups saying they'd love to buy a Chevrolet Volt if only they could put gas in and keep driving when it ran out of electricity (they can) or wondering whether they can safely charge the battery before it's been run down to zero (it can be topped off at any time, like a smartphone).

To help answer these questions, Chevy has launched a new website to help folks overcome their nervousness about electric cars. The site covers everything from how charging works to the price of electricity to where charging stations are located. Quick videos from the engineers who worked on the Bolt, as well as outsiders from companies like ChargePoint, answer questions in plain English.

It's a clever move. Chevrolet's dealerships have been selling internal combustion engines for decades and the switch to electric will be a challenging one. When I recently went to a dealer and asked questions about Chevy's plug-in hybrid Volt, which has been available since 2011, our salesperson was largely clueless about what made the car so special. I've heard similar stories from other buyers, and Chevrolet is aware of the problem.

It's working hard to revamp its dealer-training programs, and will require dealerships to be certified before they can sell and service the Bolt — a similar program exists for the Volt, which has been available for half a decade now. Among other things, dealerships will need to install a DC fast-charging station and purchase some new equipment needed to service the car. It isn't required yet, but as more of GM's lineup goes electric, the writing will be on the wall soon.

Tesla has known from the beginning that selling electric cars will require more imparting of knowledge than traditional sales tactics. That's why its stores don't look anything like a traditional dealership. Its employees are there as much to inform the public how electric cars work as they are to sell the things. Go into a Tesla store and it's common to see kids climbing all over the only car in the store, while sales people explain to mom and dad how the charger works. For Elon Musk, it's all about the long game. Folks might not be ready to buy an electric car today, but the company is happy to plant the seed and wait — especially since Tesla's Model 3, at the moment the only real competitor to the Bolt, won't begin deliveries until the end of next year.

Because the Bolt I drove wasn't the final product, we'll hold off on giving the Bolt the full Verge review treatment, but the first word that comes to mind is "ordinary." And I mean that as a big compliment. The Bolt doesn't feel different from any other car: you get in, press a start button, shift into drive, and go.

It has a steering wheel; four doors; four tires; keyless entry; a big screen in the middle that supports CarPlay and Android Auto; brake and accelerator pedals; headlights; a horn; and, thanks to the flat-pack battery underneath the floor, tons of room inside.

The car has plenty of pep. It's not exactly fast — it's no Tesla P100D — but it is more than capable of merging into highway traffic without any issues. It handles curves well, but I didn't push things too much. I would like to take the Bolt onto an autocross course just for kicks, but that's really not what this car is about.

The Bolt has a 60kWh battery pack built by LG. That company is also responsible for the excellent infotainment system that is quick to respond and shows a ton of useful information related to the status of the battery and how efficiently you're driving. But in day-to-day driving, you'd be able to ignore the power usage statistics and the prominent range-indicator on the left side of the instrument cluster — the range is so good that unless you're driving a particularly long distance (or you've neglected to charge up for a few days), you really don't have much to worry about.

Sure, if you stomp the gas accelerator pedal from a red light, you'll burn up the electrons pretty quick. Like all electric cars, the Bolt takes advantage of the 266 lb-ft of torque available from 0 rpm. It's good enough to move the car, Chevy claims, from 0–60 mph in less than seven seconds. But drive gently and you'll be rewarded (the car gives color-coded indications of how green your driving is).

But thanks to the hefty battery, you really don't have to worry. Driving style will matter most to what range you actually get, but using the heat or air conditioning, outside temperature, and the terrain all play a factor as well. On my drive, an admittedly controlled one thanks to the precise directions issued by Chevrolet's PR department, I managed to cover 236 miles and the car claimed I could go another 38 miles before I ran out of juice.

There's a brand-new network of fast-charging stations along both coasts — from Portland to San Diego, Boston to Washington, DC — which should allow for relatively easy long-distance travel, too.

There are two main drive modes. Shift into "D" and the Bolt acts just like a regular car. It will slowly creep forward if you take your foot off the brake and gradually slow if you let off the accelerator. But shift into the oddly labeled "L" (I suspect it stands for "Low" but I have no idea why), and the car behaves much more like an EV: no more creeping forward and the car will jump into an aggressive regenerative braking mode when you lift off the throttle. This improves range but does take a bit of getting used to. A paddle on the back of the steering wheel adds even more regenerative braking in either mode, and, when used in conjunction with "L" on the gearshift, means a talented driver can just about avoid using the brake pedal entirely.

I'd get far less traveling at 70 mph on the highway (the car has a limited top speed of 92 mph), but it's still more than enough range for most people. The car will support both 240-volt Level 2 (25 miles per hour of charge at home or at public chargers) and DC Fast Charging (up to 90 miles of range in 30 minutes, or 160 miles in an hour at equipped public chargers), as well as the much slower Level 1 charging from a standard 120 volt power outlet (around 4 miles per hour of charge).

The car offers standard EV tricks like delayed charging to take advantage of off-peak electricity pricing, timed cooling and warming of the car while still plugged in, and a few other innovations that Chevy doesn't want to talk about yet.

But the goal is for potential Bolt buyers to not think about all that stuff. Instead of thinking of the Bolt as an electric car first — something that'll be a little bit tricky since the actual name of the car is, rather foolishly I think, the Bolt EV — buyers should just think of the Bolt as a car, and compare it to other potential vehicles on a level playing field. Deliveries are slated to begin before the end of the year, and European buyers will be able to buy a sister car from GM's Opel division.

That's the beauty of the Bolt. It seems to be good enough as a car that you don't need to sacrifice to buy it. If you're in the market for a small car, the Bolt is worth a look alongside other cars in its price range. The only difference is that the Bolt happens to be electric, but 99 percent of the time you won't even notice the difference — except that you won't need to stop at a gas station except to use the restroom, grab a soda, or to wash your windshield.

If skipping a twice-a-week stop at the gas station is the only sacrifice you need to make when owning a Bolt, I think Chevy will pleased. After all, it's really just another car.