Behind the wheel of Uber's new self-driving car, which hits the road today

Behind the wheel of Uber's new self-driving car, which hits the road today

On Monday, I found myself behind the wheel of a Ford Fusion driving down a Pittsburgh street lined with gorgeous Romanesque brick factories. The sky was a cloudless blue, the Allegheny River sparkled seductively through the trees, and I was able to drink in all the splendor of the day without distraction because I wasn’t actually driving the car. This was one of Uber’s new self-driving cars, and I was behind the wheel, admiring the view. That is, until the Ford SUV in front of me stopped without warning.

Time slowed down. My brain issued the signal to brake, but before my foot could respond, the car braked on its own. It was abrupt but gentle, the kind of stop that would have caused my wife to raise a disapproving eyebrow, but only slightly. There wasn’t enough time to be amazed. The driver of the SUV was waving for me to pass him, and while the self-driving Uber is festooned with sensors and cameras which it uses to "see" its surroundings, there was nothing in the car’s algorithm that could interpret the universal symbol for "drive around me." The human — aka me — still needed to take control.

Before I could brake, the car braked on its own

I was in Pittsburgh to take part in a brief, tightly scripted media frenzy ahead of Uber’s announcement today that a select group of customers can begin hailing rides from self-driving cars. It’s a significant moment for Uber and for the future of transportation, if you believe the futurists and Silicon Valley types who predict that driverless cars, especially those that can be hailed using your phone, will fundamentally change the way we get around.

For now, two Uber employees will accompany every trip to monitor the car’s self-driving capabilities — one behind the wheel and the other in the passenger seat with a laptop displaying the data and images gathered by the car’s sensors. Uber’s ultimate goal, though, is enabling customers to summon a car on demand with nobody in it.

The company says it plans to gather feedback from customers who opt into the trial and use it to make decisions about how to expand its self-driving program. It’s just a test run, but it marks the first time that self-driving cars are being deployed in a ride-hailing capacity.

Uber’s ultimate goal is a car with nobody in it

Overall, riding in Uber’s self-driving car was equal parts thrilling and mundane. I was surprised by the level of skill with which the car drove itself, but also by how many times it dropped out of autonomous mode unexpectedly. (Other reporters I spoke to said that hadn’t happened to them at all.) A dinging sound would indicate when the autonomous mode suddenly disengaged. The engineers said it was impossible to say exactly why it happened without going back through the car’s data logs.

There were a few hair-raising moments, like when an oncoming tractor-trailer suddenly swerved into my lane of traffic, or when a woman in a blue-and-white striped shirt dashed out into the street in front of me. These were the kind of routine-yet-unpredictable situations drivers encounter every day, but this time it was a computer making the split-second decisions. Sometimes the car would kick out of autonomous mode, forcing me to take control; other times the car’s computer responded itself.

It was equal parts thrilling and mundane

When I rode in the backseat, the engineer in the driver’s seat made it a point to keep his hands on the steering wheel. When it was my turn behind the wheel, I couldn’t resist the urge to rest my hands in my lap as the car steered itself. Fortunately, Uber’s self-driving team has been instructed to be more mindful than foolhardy reporters. 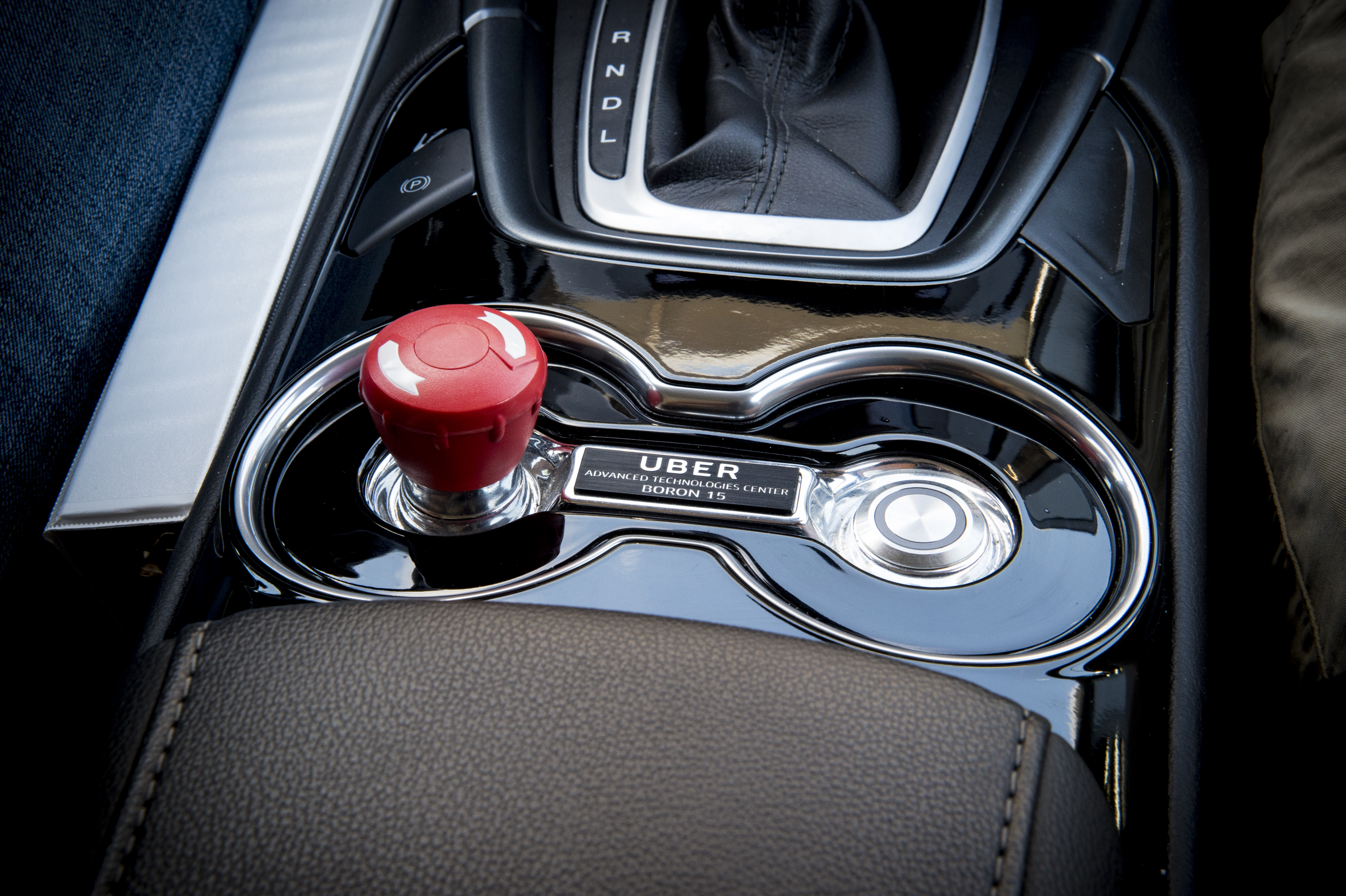 "We didn’t invent self-driving cars; they’ve been around for a long time," said Anthony Levandowski, vice president of engineering at Uber and the co-founder of Otto, a self-driving truck startup recently acquired by Uber. "Even in the '50s there were advertisements about families riding around in the back of vehicles, playing dominoes, and just driving down the highway efficiently and safely. I’m sorry to say there’s going to be no domino playing in these vehicles."

"I’m sorry to say there’s going to be no domino playing in these vehicles."

The interior of the car was luxurious but minimalist. There was no exposed wiring, nor any fancy displays that you may find in a Tesla. There were three lights on the dash to indicate the mode you were in, and two buttons — one silver and the other red — on the console between the driver’s seat and passenger seat to engage and disable autonomy, respectively.

There was a tablet in the back so passengers could track the car’s progress, as well as take a selfie. It was a brilliant, if transparent, piece of marketing: who could be afraid of a car that lets you take a selfie?

The exterior of the car showcased the full suite of Uber’s self-driving technology: a rotating LIDAR sensor on the roof, as well as front, rear, and side-mounted sensors to detect obstacles in close proximity. There are 20 cameras that watch for braking vehicles, crossing pedestrians, traffic lights, and signage; cameras and sensors to collect mapping data; and roof- and trunk-mounted antennae to provide GPS positioning and wireless capabilities.

who could be afraid of a car that lets you take a selfie?

(In addition to its Ford Fusions, Uber also has also inked a deal with Volvo to purchase a hundred XC90 SUVs for the next stage of its autonomous technology. Uber says the Volvos are still under development.)

A huge number of car and technology companies are working on self-driving cars, and Uber’s isn’t so different from the competition. But Uber is the first to make theirs publicly available. It’s a high-risk move for a company known for its devil-may-care behavior. There have been a handful of high-profile accidents involving self-driving cars, from Google’s fender bender with a bus to a fatal crash involving a Tesla in Autopilot mode. With its fleet about to deploy in such a highly visible way, Uber acknowledges that accidents are inevitable. The company says it will be transparent about its scrapes, no matter the severity.

Polls show that most Americans are still skeptical of self-driving cars, with over a third saying they would never buy one themselves. As such, the company sees three challenges ahead: technology, societal acceptance, and regulation. The federal National Highway Traffic Safety Administration is currently working on a set of guidelines and regulations for self-driving cars. Uber and its Silicon Valley peers are watching that process closely.

There are three challenges ahead: technology, societal acceptance, and regulation

Over the course of the morning, there was a lot of talk about safety and innovation, but very little about the future of the millions of drivers across the world that are currently working for Uber. what happens to them? Do they have a future as testers in Uber’s self-driving cars? Unlikely, an Uber engineer told me; those jobs will probably go to employees with special training. Uber drivers are independent contractors with few protections or benefits. The faster Uber gets its driverless cars on the road, the faster all of those drivers will be out of work.

"It’s still very early," the company said in a blog post today. "Self-driving Ubers have a safety driver in the front seat because they require human intervention in many conditions, including bad weather. Even when these technology issues get fixed, we believe ridesharing will be a mix — with services provided by both drivers and self-driving Ubers."

And what would passengers lose in a self-driving future? If all the Uber cars that I hailed in Pittsburgh had nobody in them, then I never would have met Verquan, the former lightweight boxer who is suing a film company for damaging his Nissan Altima; or Darlene, who keeps her Corolla immaculate; or Frank, the 70-year-old former clothing salesman who was born in Pittsburgh but grew up a few blocks from where I live in Brooklyn. I would never have heard their jokes or their stories or their small insights about life in Pittsburgh. The ride may be safer and cheaper with a robot driving the car, but what about these drivers and the jobs they rely on?

Verquan was unconcerned. "Nobody’s gonna ride in those," he scoffed. But Frank, the gravel-voiced septuagenarian with a 4.4-star rating, was more circumspect. When I asked him what he thought about Uber testing its new self-driving cars in his backyard, he chuckled and shook his head. "I’m not worried about ‘em," he said, "because what is what is, and I can’t change it."

More from this stream Uber's bumpy road to world domination