How to master the new iPhone 7 and iPhone 7 Plus

How to master the new iPhone 7 and iPhone 7 Plus

By Nick Statt and Ashley Carman

The iPhone 7 is a lot like its predecessor. It looks identical, save a slightly different camera on the standard model and an additional lens on the iPhone 7 Plus. And when put in a case, you wouldn’t be able to tell this year’s Apple product from last year’s, even if you ordered one with the new "jet black" finish.

Sure, inside there are faster processors, slightly bigger batteries, and lenses with higher megapixel counts. (Oh, and no headphone jack.) But we’ve reached a point where that doesn’t really matter. The average consumer isn’t so concerned with subtle design iterations or incremental spec improvements so much as they are with how technology feels. The important question is whether consumers feel like a new gadget makes their lives easier and enriches the experiences they love, be it snapping photos, or chatting with friends, or staying informed.

The iPhone 7 is proof that software trumps hardware

So maybe you just bought the iPhone 7, and you’re holding it in your hand right now, reading this story, and wondering, "What now?" Well, know that the device you’re holding is designed to be the most optimal piece of hardware for iOS 10, which is really where you’ll see, feel, and appreciate how far the mobile industry has come. We may be due for a big hardware upgrade soon — next year’s rumored 10-year anniversary version of the iPhone is said to be Apple’s biggest leap in ages. But with the iPhone 7, you can certainly glimpse what’s around the corner, and take advantage of that foresight today. Here’s our guide on where to start.

With iOS 10, Apple is unleashing the full creative force of the App Store onto iMessage. Now you can play games, paste stickers, and cause virtual pandemonium with your iPhone-using friends thanks to all the add-ons you can download straight from Apple’s new chat store. There’s a lot of junk in there, so it takes some time to sift through it and find the good stuff. We’ve highlighted some options below, as well as a few must-have apps for the modern mobile home screen.

Outfolded: Developer 3 Sprockets have mastered minimalist mobile design with the puzzle game Outfolded. The app intro recommends headphones, and pleasing tones echo back and forth as you fold out geometric shapes of different sizes to reach an end destination. It looks, feels, and sounds a bit like Ustwo Games’ Monument Valley, and that’s a good thing. Outfolded is an easy way to kill time, relax, and exercise your brain. Plus, it’s free.

Fantastical 2: So Microsoft killed Sunrise’s excellent calendar app, and you refuse to switch over to Outlook. Luckily, there’s an alternative. For $2.99, you can get Fantastical 2’s mobile app, which gives you a powerful set of tools to manage your calendar, set reminders, and search events across your schedule. Its desktop version is a eye-popping $40, but for those of us who need a solid mobile replacement that has a better feature set than Sunrise, Fantastical 2 is worth the money.

Motion Stills: We loved Google’s Motion Stills when it was released in June, and we’re still loving it. Apple did make some enhancements to its Live Photos with iOS 10, like being able to edit and crop them, but Motion Stills makes it easy to see all your short videos in one place. It’ll also turn them into shareable GIFs, toggle sound on and off, and stabilize them. This is the primary way I’m creating videos for Instagram now. Thanks, Google, for this great iOS app. 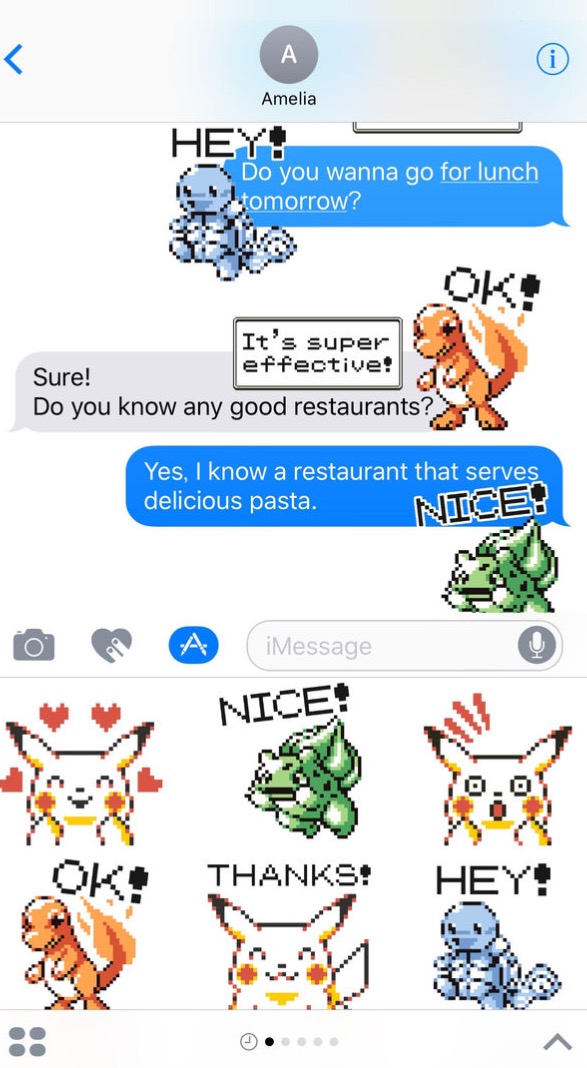 Pokémon Pixel Art sticker set: Now that iOS 10 supports stickers in iMessage, we can run rampant on group chats with all sorts of logos, images, and over-expressive smiley faces. And nothing is quite as obnoxious as responding to everything our friends say with a pixelated Squirtle. The pokémon sticker pack, which costs $1.99, lets you choose between a number of sprites and text boxes from the original pair of Pokémon games. It’s a must-buy for those of us who love to derail group chats and escalate emoji wars.

GamePigeon iMessage app: iMessage apps may be a desperate ploy to stave off competition from Facebook, but it’s still nice to be able to play games inside the default iPhone messaging client. GamePigeon has a tacky design, but it’s a solid way to get familiar with the iMessage format and challenge friends to board games. There’s poker, pool, and a simplified version of Go, and the developer is adding more games in the future. For a free app, it’s a good start.

Poncho Weather widget: Poncho is taking full advantage of the new iPhone lock screen with its weather app. Let’s be real, most widgets look like an afterthought to an app, but not Poncho’s. It’s well-designed and convenient. Its signature weather cat is included on the widget to update you on weather throughout the day along with some jokes. Poncho is way more fun than Apple’s boring weather app.

iOS 10 is one of Apple’s biggest software releases to date and comes with a lot to discover. Seriously, it almost seems like Apple hid new features just to make us hunt to find them. We can’t list everything here, but we’ve included some of our favorite new features that you’ll definitely want to try. Hello, new flashlight settings. 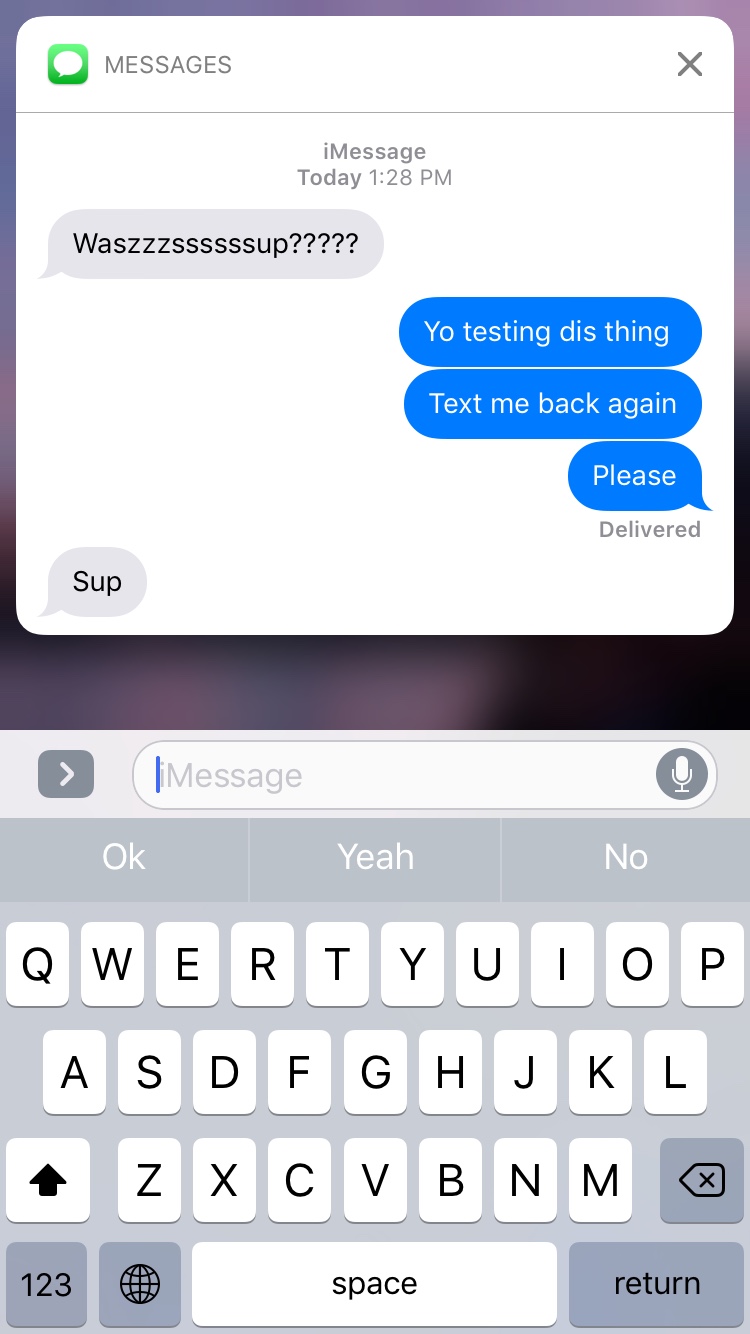 Have a text convo from the lock screen: I always fire off text replies from my lock screen. I don’t have time to open up a thread, c’mon. Now with iOS 10, you can view the last few text messages in a thread if you force touch on a message you received. You’ll also be able see a person texting with the typing bubble. It’s the Message app but mini. I’m mainly using it when I’m in the middle of a heated conversation and don’t feel like unlocking my phone to continue it. Finally, a real use for 3D Touch.

Turn read receipts on a specific thread: This is kind of like waging psychological warfare, but just for a day, try turning on read receipts. Don’t resist the urge. Before iOS 10, turning read receipts on meant the setting was applied to every text thread, but now you can decide which threads you want the receipts to be on. I know some people who have read receipts turned on for work. This makes sense. I know other people who only turn them on when they’re dating and want to mess with their partner’s head. That’s crazy. But it does seem like this new iOS feature was made for trolling.

Edit a Live Photo: Live Photos are one of the more under-appreciated additions to iOS in recent years. With a simple one-tap toggle, we can turn photos into short-form GIFs that respond to finger pressure. With iOS 10, we can also edit those Live Photos for the first time. That means adding filters and tweaking the exposure and color balance of images. It’s not super groundbreaking, but it does help bring Live Photos on par with the static shots we’re more likely to share on Instagram, Facebook, and elsewhere. 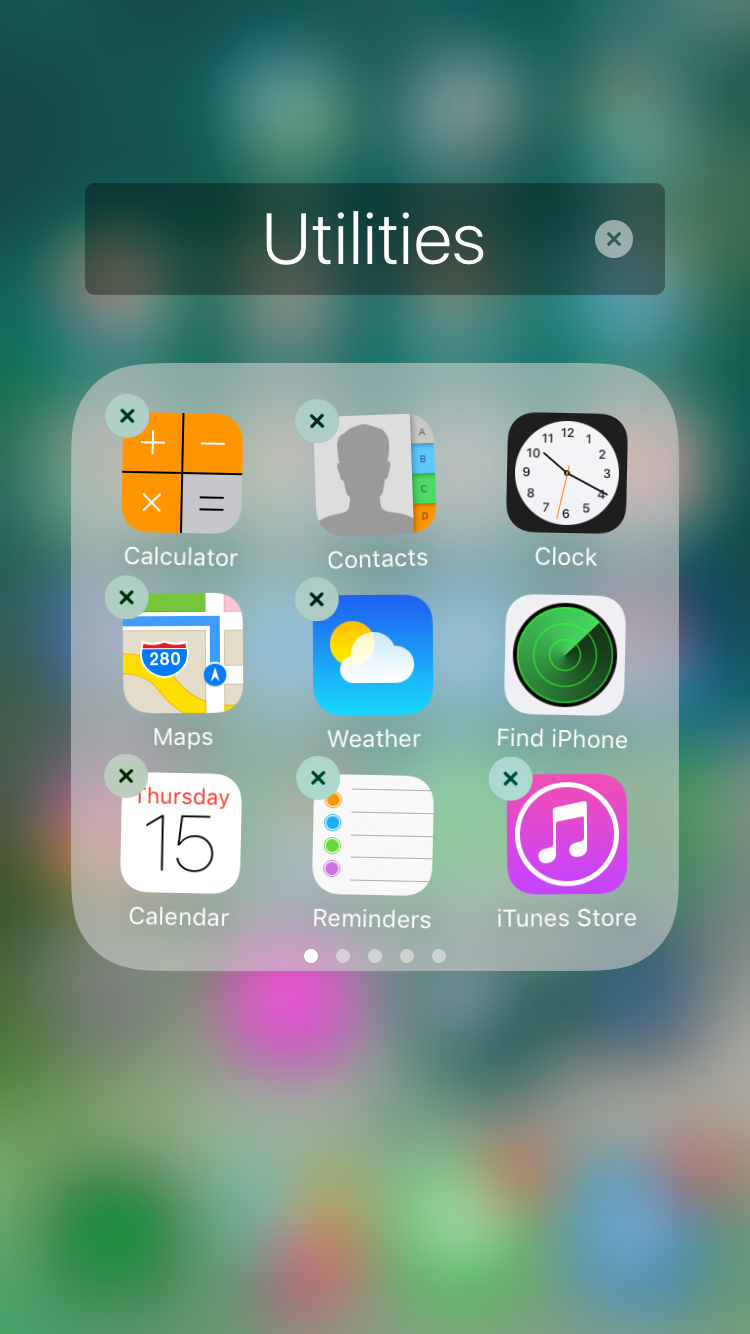 Delete the stock apps: For almost a decade, iPhone users have been clustering the collection of stock Apple apps into a folder and passive aggressively naming it "Crap I Don’t Need." With iOS 10, we can now rid ourselves of that preloaded software. (We’re actually just hiding it from the home screen, but let’s forget about that technicality.) Still, the change means we can now delete ever-persistent apps like Notes, Mail, and Maps, all of which are lackluster in comparison with third-party (mostly Google) alternatives.

Emojify all of your texts for a day lol: Apple wants us to converse in emoji. With iOS 10, our text threads will now suggest correcting some words to emoji. The word "basketball" will bring up a basketball image, for example. Maybe emojify is worth a try? Can you convey a point faster and easier? Is it more universal? Good luck out there.

With each new iPhone and iOS refresh comes a new set of sometimes perplexing rules, options, and settings panels. Figuring out how to take advantage of a new perk, or how to revert something back to the way you like it, can be frustrating. Plus, users who haven't upgraded in two years will have to wrap their heads around 3D Touch for the first time. So there’s a lot to learn, and it could take some time until your preferences are in order. Start with these tips. 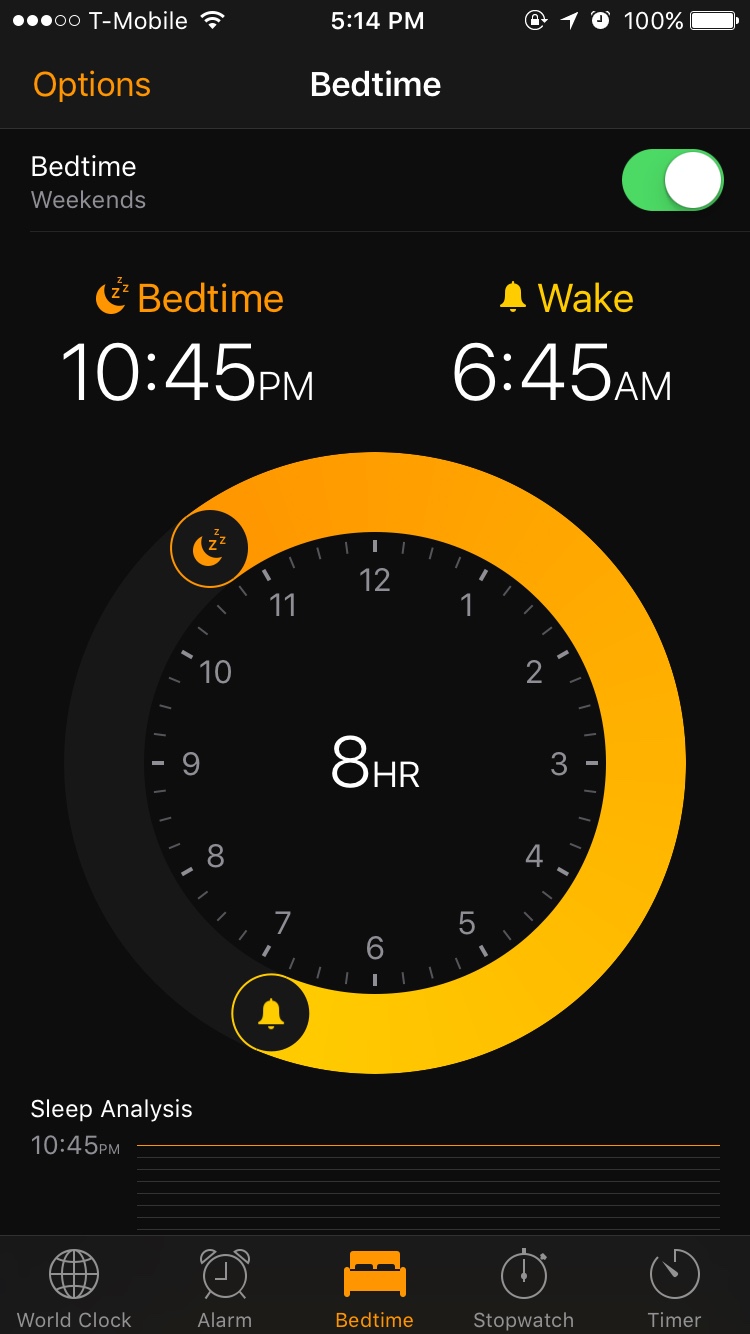 Adjust the home button: Over the years, Apple’s TouchID fingerprint reader has gotten so fast that it works even when we don’t want it to. The company has heard the feedback and for iOS 10 users, we now have to press in on the home button to unlock your phone. If you liked just being able to rest your thumb to unlock, you can head over to Settings, tap Accessibility, and find the Home Button option. There you can toggle on the "Rest Finger to Open" option to go back to the good old days of accidentally unlocking your phone when you just meant to check the time. 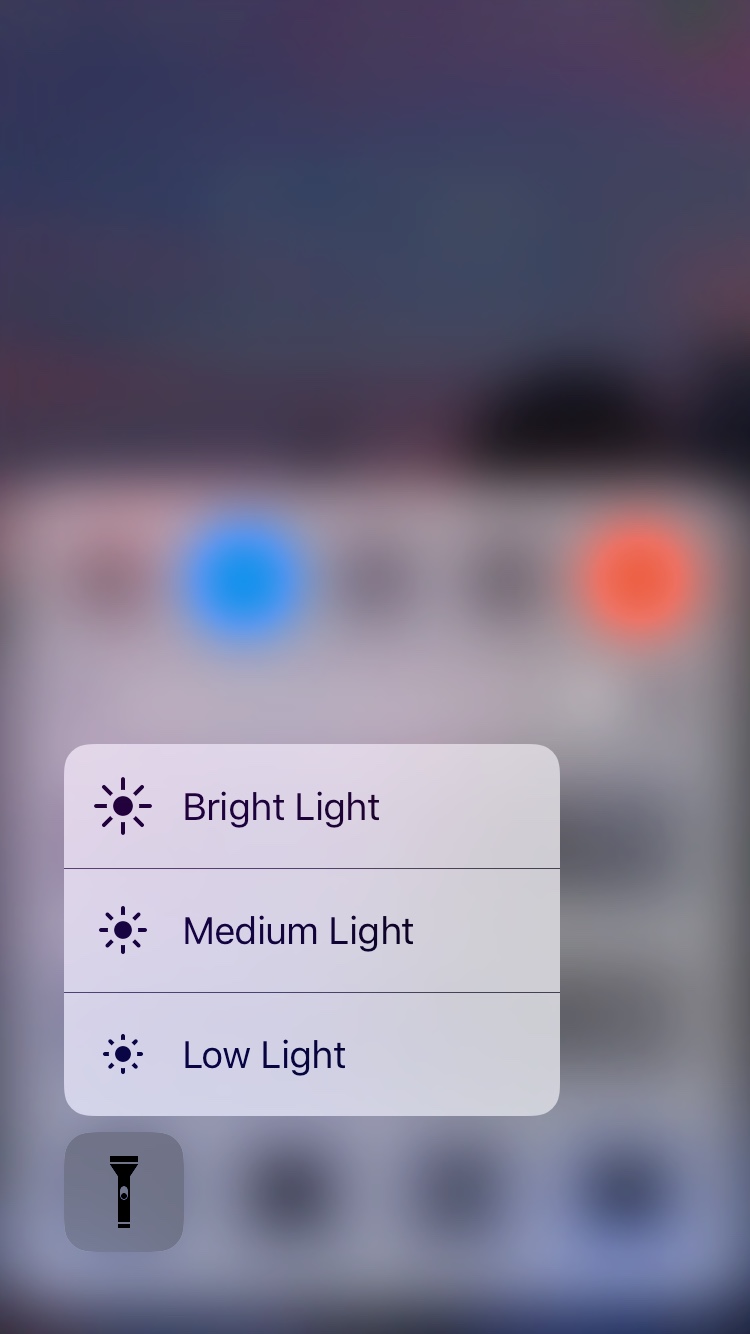 Add widgets to the lock screen: The iOS 10 lock screen is a lot more powerful. In addition to letting us access the camera with a left swipe, we now have a huge list of actionable and customizable widgets we can access by swiping right. Essentially, Apple took its struggling Notification Center and reworked it from the ground up. To add new widgets and rearrange their order, scroll to the bottom of the list and tap Edit.

Make use of 3D Touch on Control Center icons: With the redesigned Control Center in iOS 10, there's a legitimately useful reason to utilize 3D touch. By using a hard press on any of the four icons in the bottom row, we can do things like automatically set timers and jump right into the iPhone's selfie cam mode. It's also a great reason to bury apps like Calculator and Camera in folders, so you can free up your home screen for the software that matters.

More from How to