When a tabloid rumor is true, let’s not forget the entire decade it was wrong

When a tabloid rumor is true, let’s not forget the entire decade it was wrong

Neither one of these people have ever been very independently interesting as celebrities, both because they’re reliably good at their jobs and because they aren’t that chatty with the public. There aren’t a lot of plot points in the narrative about Brad and Angelina. While their relationship has spanned a decade, the public has insisted on sordid shows of solidarity with Pitt’s ex-wife Jennifer Aniston and hyperbole about how often Pitt and Jolie have adopted children from Cambodia, Vietnam, and Ethiopia. But once those wells were dry, the only thing left to report about this rich and famous couple was that they were about to stop being a rich and famous couple.

Tabloids have reported this for the last decade. Jezebel's Bobby Finger rounded up the dozens of covers proclaiming this breakup, and though he says they "called it over and over and over," I'd say he's only part right. What they did was more like putting it all on the same random roulette number until they struck. 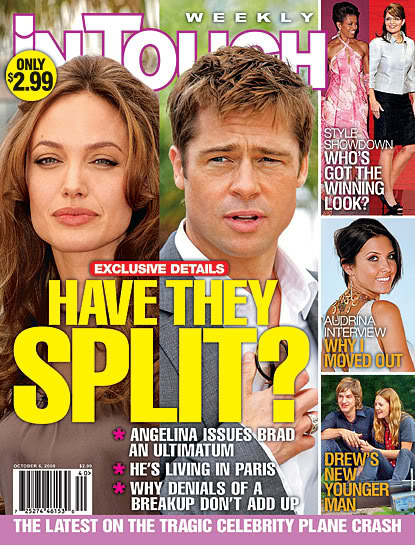 Today, a broken clock is right. Jolie has filed divorce papers that cite the standard "irreconcilable differences." TMZ’s report also suggests that she will hire Hollywood’s most notorious divorce lawyer, Laura Wasser (who also handled Jolie’s divorce from Billy Bob Thornton in 2003). This is not because "sources" were telling the truth or because Star hires good reporters. It’s because the least interesting bad thing will usually happen if you just wait long enough. People will usually do the most boring thing, which is to stay married or get divorced, given enough time.

The editors of tabloids know this better than anyone, and are certainly aware that every time they write a headline they are taking a gamble on the likelihood of its veracity. As Finger points out in his weekly tabloid column "Midweek Madness," Katie Holmes and Jamie Foxx are about to get married for "what feels like the 52nd time in three years." Maybe, eventually, it will be true! Writing the headline over and over certainly makes it feel more likely even if that’s not technically how the universe works.

Tabloids knew about this break up for 10 years

I’m not trying to say that the end of an 11-year relationship is uninteresting and unimportant to the people it happens to. I’m sure it is very painful, and compliments are in order for anyone who makes a relationship work for over a decade. But it is broadly uninteresting because it happens all the time, and it usually happens for non-titillating reasons, like "irreconcilable differences."

On the bright side: today is a huge moment of vindication for Us Weekly who recently printed a cover story about an engagement ring Tom Hiddleston bought for Taylor Swift. Get together or stay apart? They made the wrong bet last time, but they were bound to land on red eventually.

Most people break up.