When driving is a thing of the past

A fine layer of flinty ash covered the hoods of the cars at the Pebble Beach Concours d’Elegance. No amount of polish and preening could protect the flawless exteriors of the world’s rarest, most coveted cars from the incessant sprinkling of charred refuse of nature that settled on every surface. But despite the eerie dim of smoldering California wildfires in the distance, the pomp and circumstance of America’s finest classic car show carried on, as the champagne flowed on the fairway overlooking the misty Pacific Ocean.

Pebble Beach Concours d’Elegance is steeped in tradition. Held annually in August, the event dates back to 1950, and celebrates mint condition restorations of 20th century luxury automobiles. Like every year, spectators began to gather before daybreak to see the cars creep onto the lawn, as well as a few inevitable sputtering breakdowns. Hagerty, the classic car insurance company, served up donuts, coffee, and coveted baseball caps to the earliest risers who came first to see the field of 229 cars and motorcycles. Then, as the morning set in, judging commenced across 28 classes ranging from pre-war preservation to postwar touring. 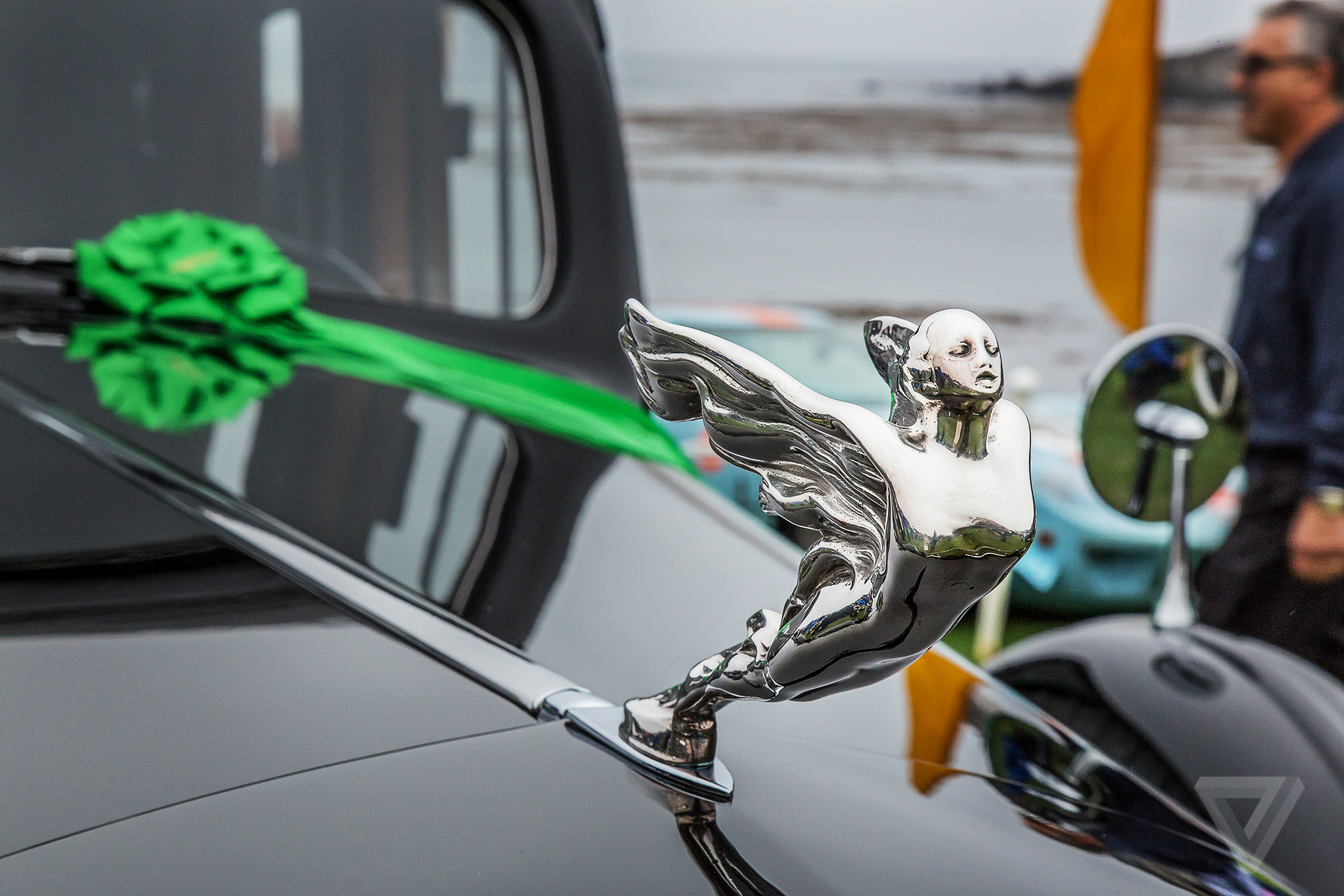 Pebble Beach doesn’t pretend to be inclusive. You have to be invited to show your car, which means you have to mingle and make friends in this moneyed set. Many longtime owners hire studied craftsman, some of whom graduated from McPherson College's Automotive Restoration Technology Program, and the process can take several years and cost six or even seven figures.

By noon, the field was packed in a way that resembled a crowded outdoor art opening. For enthusiasts, there was much ogling at under-the-hood advancements of the combustion engine. Many of the participants were dressed in period finery and bespoke millinery to accentuate their cars. The very-French Delahayes, two-seater Indy cars, vintage BMW motorcycles and art cars, Elvis Presley’s cool 507 BMW, and my personal favorite the Italian engineer, designer, and coach builder Bizzarrini received featured treatment at this year’s Concours. It culminated, as it does every year, with the best in show award on Sunday evening, which went to the 1936 Lancia Astura Cabriolet once owned by Eric Clapton and designed by the famed master coachbuilder Pinin Farina.

For the love of cars, people have done ridiculous things

For the love of cars, there is no better gathering in the United States. It’s the physical story of the automobile come to life from a time when making and driving cars was not a utilitarian intention, but a wild symbol of innovation and audacity. These cars were about what they made people feel. The architect Le Corbusier called the car, "a machine for living" and had the panache to pose with his Voisin. That’s what continues to stoke my interest in the cars displayed at Pebble Beach.

Not everyone who comes to Pebble Beach cares to unearth the stories of yesteryear. Like anything high-dollar, many came to ogle in the presence of money and power in close proximity to the Bay Area. The auction houses reportedly sold nearly $345 million worth of vehicles during Monterey Car Week, a number that’s impressive, but actually in continued decline from 2014. The standout exception was a Jaguar D-Type Roadster that sold for $21,780,000 at Sotheby’s. While the collector car market isn’t hurtling to new heights, in this crowd the hurt doesn’t cut all that deep. 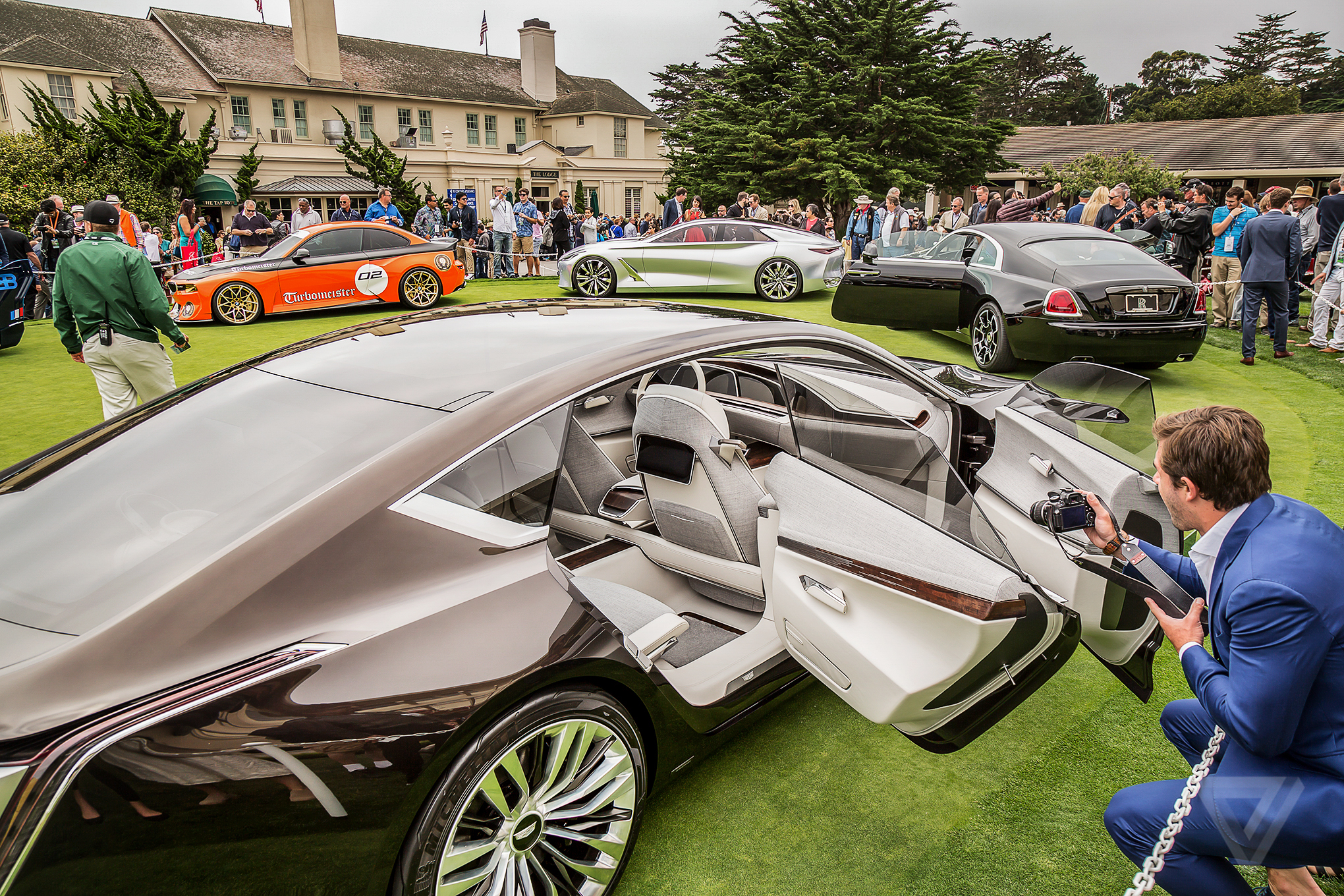 If you show one car at Pebble Beach, chances are you have might have ten at home in the garage, or in the case of an over-the-top collector, you may have your own private car museum, like the Mullin Automotive Museum. And so Pebble Beach presents an opportunity for modern day carmakers to sell cars. Contemporary luxury brands like McLaren and Ferrari invite their customers to parse through bespoke creations. Automakers choose Pebble Beach to unveil their latest concept cars like the Vision Mercedes Maybach 6 and the Cadillac Escala.

Over the decades, Monterey Car Week has grown from a one-day insider collector show to a weeklong display of car culture spread throughout the Monterey Peninsula that attract large crowds who line the streets or score tickets to attend other fanciful events. 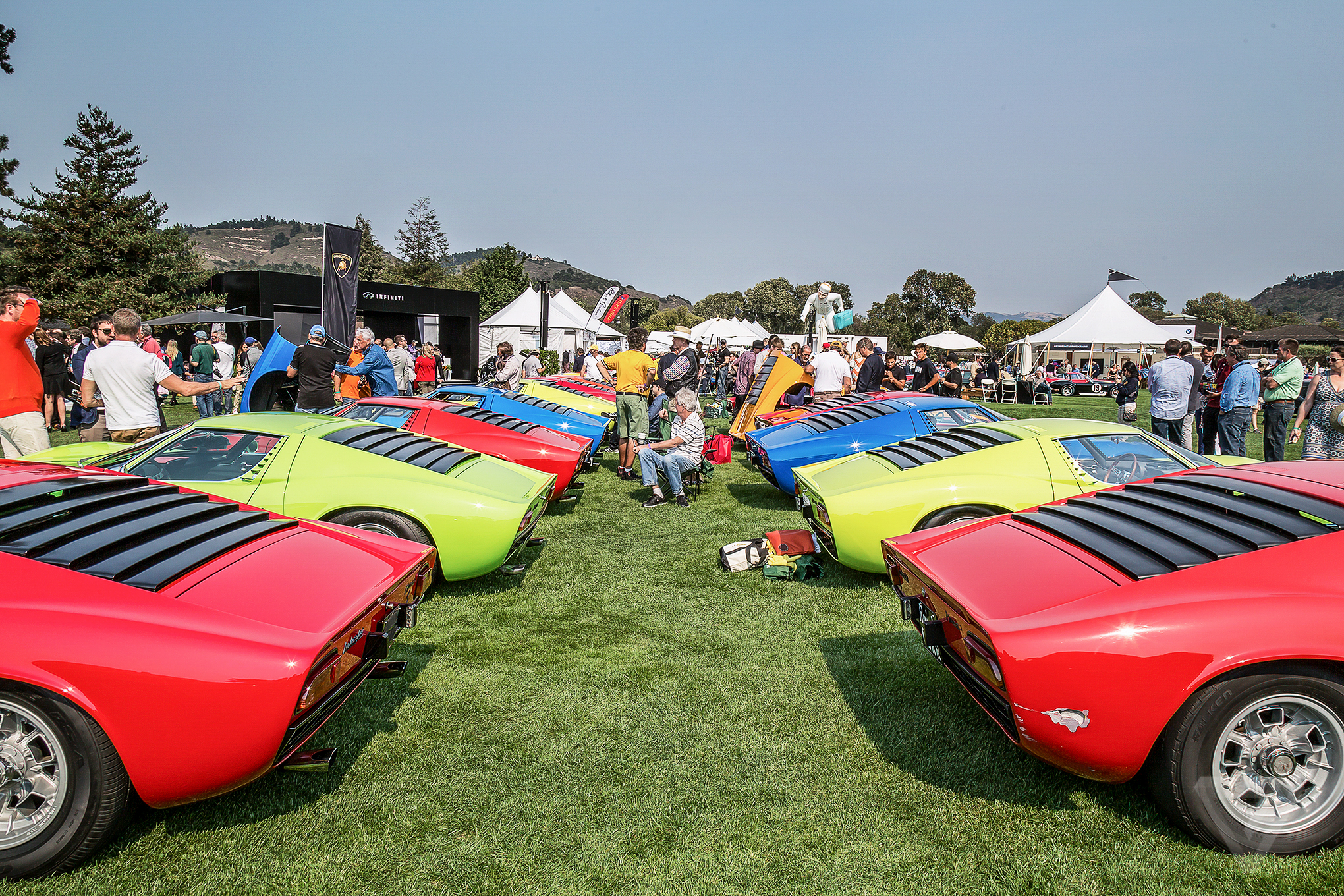 A standout on the bill was a $600 ticket to the Quail Motorsports Gathering. At the Quail, Lamborghini Miuras lined up like lollipops. A 1953 Ferrari 375 MM Pinin Farina Spider was crowned king of the garden party. For the more playful and not-so-rich, there’s always Concours de’ Lemons, "celebrating the awful, mundane and truly awful," a tongue-in-cheek knock off of the grandiose display of wealth across town.

Being up close with the more elegant pre-war cars at Pebble Beach, it’s natural to see how the affair with the automobile began. Before computers, there were cars. It must have been exciting, to be on the advent of such progress in the early 20th century. That’s what I imagine when I see the cars, what it was like to be alive then, when horses ruled over horsepower. In 1909, the Italian futurists constructed their ideology based on the allure of the automobile, a contemporary thing of seduction of power and speed inspired by rapid innovation:

"We affirm that the world’s magnificence has been enriched by a new beauty: the beauty of speed. A racing car whose hood is adorned with great pipes, like serpents of explosive breath—a roaring car that seems to ride on grapeshot is more beautiful than the Victory of Samothrace."

Any student of car design history name checks Marinetti’s futurist ode to car, but I like to come back to it when I find myself falling into the rabbit hole of visionary car hype that’s taken over in recent times.

For the love of cars, people have done ridiculous things. They’ve bought more than they can afford. They’ve played dangerous games in the name of speed, adrenalin, and ego. They’ve taken daring trips across the country, as Bertha Benz did first in 1888 to prove that cars could indeed travel long distances.

Caught up in the delirium of possibility, entrepreneurs founded car companies. And like any speculative boom, thousands of the most ambitious, dreamiest and visionary ideas failed. The stunning Delahaye brand on display at the Concours went belly up in the 1950s. 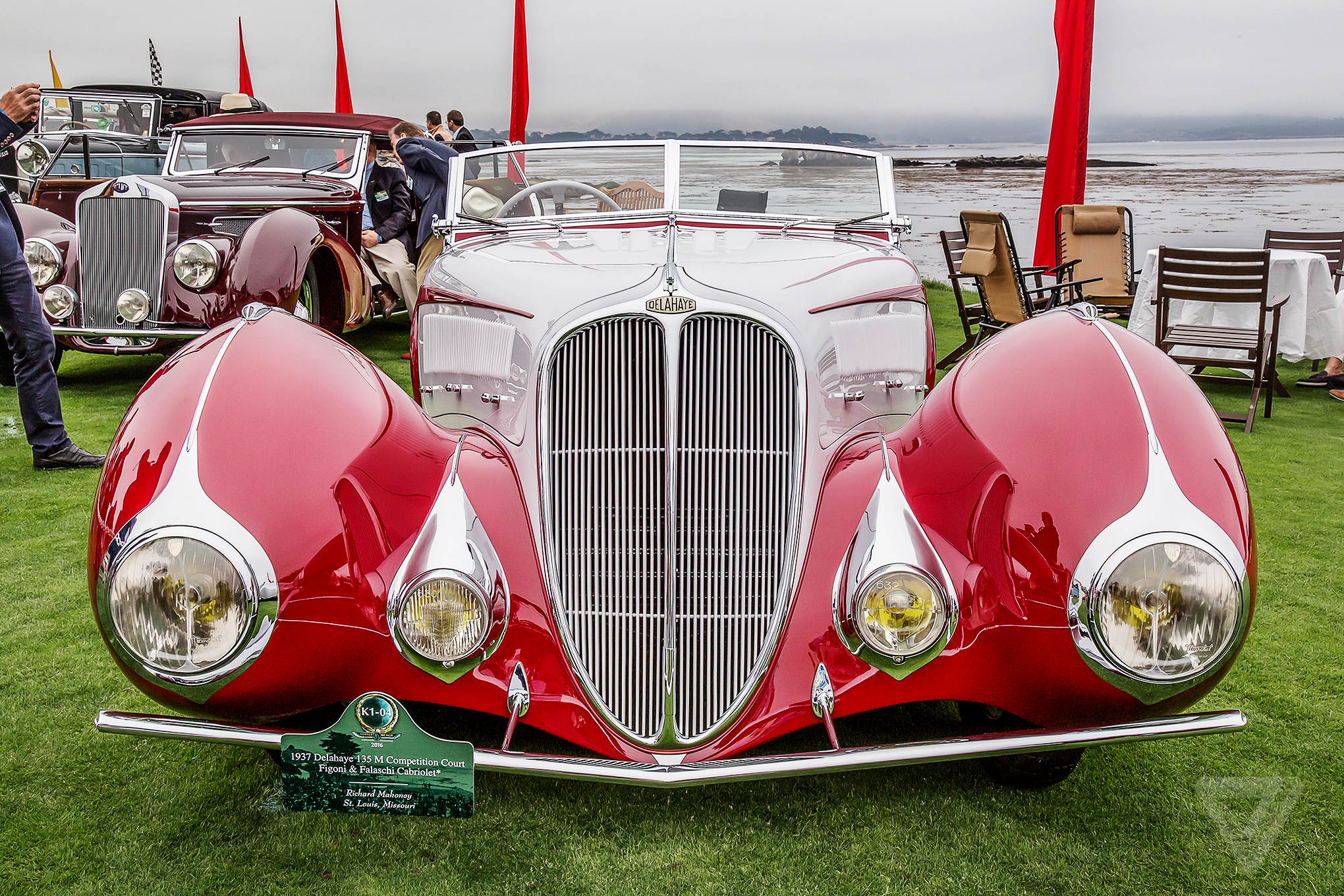 We’re on the brink of self-driving cars, new ways of thinking about transportation, and the myriad of ways that technology will shape car culture. But what happens if and when we no longer drive for purpose, or even for pleasure? Could the 20-teens be the beginning of the end of motoring as we know it? We live on a planet where fires burn uncontained, where perhaps the golden era of motoring is a flickering flame, as we seek out other solutions that come with other tradeoffs and a new gold-rush of speculation.

It’s been over a month since Pebble Beach, the cars have been shipped home, and restorations for next year's awards are already well underway. That’s what stands out about the Pebble Beach Concours d'Elegance and shows like it — the grand attempts to recreate the past in every detail— in cars that were so elegant, that they were destined to fail. They risked it all. They lost. While their companies faded away, the cars didn’t. As the fires burned late in summer, the beautiful cars were covered in a fine layer of ash, despite all efforts to wipe them clean.