After blasting her in Twitter tirades and during campaign trail speeches, Donald Trump is turning to Snapchat to attack Hillary Clinton. Trump's campaign has purchased national Snapchat geofilters, the Independent Journal Review reports, that will be available to Snapchat users during Monday's debate. A preview version of the filter frames the event as being "Donald J. Trump vs. Crooked Hillary," but Time says it will be changed during the debate itself for a different version that removes the direct attack on the Democratic candidate.

While both Trump and Clinton campaigns have paid for Snapchat filters before at regional levels, Trump's debate filter will mark the first time a candidate has purchased one of the overlays to run at a national level — only one of which is available per day. Of the two camps, it's Clinton's campaign that has more regularly turned to the app — using events like this month's Iowa vs. Iowa State football game to promote its candidate— but Trump's team is reportedly trying to increase its reach among the younger voters that make up the bulk of Snapchat's userbase. 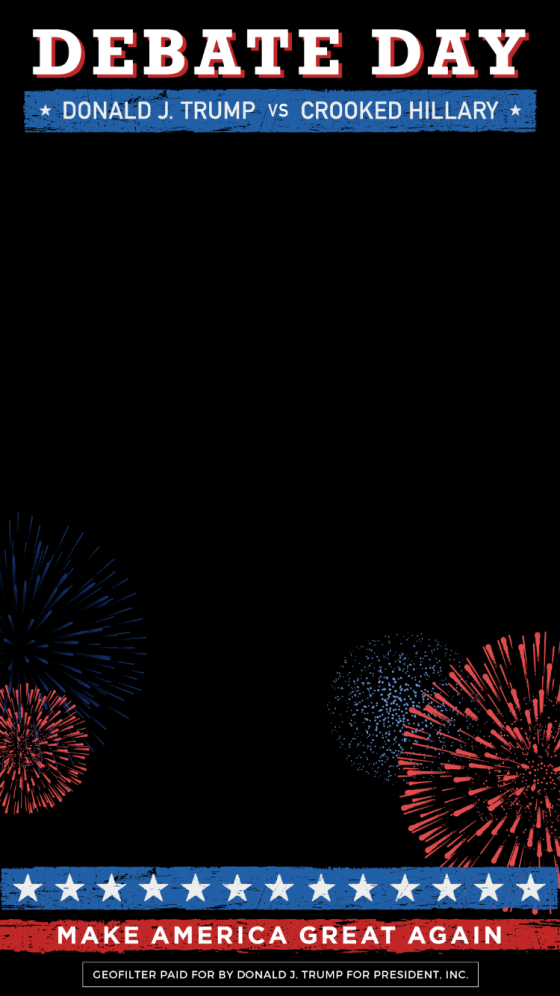 At a regional level, Iowa has been a particular hotbed of political Snapchatting: Bernie Sanders' campaign purchased regional filters in the state, and prior to Trump's selection as the Republican presidential candidate, Ted Cruz called out "Duckling Donald" in a Des Moines-specific filter. But it's not just swing states that were targeted by political groups keen to score that valuable youth engagement. Clinton has used Snapchat's stories to attack Trump's policies, while conservative group Judicial Watch also ran its own filter during Hillary Clinton's Benghazi hearing that attacked the Democratic nominee over her email records.