Activity trackers should be accurate trackers

People really love their Fitbits. This is evidenced by sales numbers alone: Fitbit sells more activity trackers than anyone else. Anecdotally, Fitbits abound: walk through any airport, hike any trail, jog through your neighborhood streets, and you will likely see someone wearing a Fitbit.

So it’s not surprising that so many people have asked me about the new Fitbit Charge 2 when they’ve spied it on my wrist recently. The midrange Charge 2 is the successor to (and replacement of) the Charge HR activity-tracking wristband. The $149 Charge HR, with its optical heart rate sensors and its ability to automatically recognize exercise activities, really hit the sweet spot for a lot of people when it came out in 2015 — so much so that it’s still Fitbit’s best seller more than 18 months later. The Charge 2 aims to do all of this plus more, and for the same price.

What more could it possibly do, you ask? For one, it has a bigger display than the Charge HR. Four times bigger, to be exact. It’s a tap-sensitive, OLED display. The Charge 2 most definitely looks like a fitness tracker, not a bracelet or anything suggestive of a "fashion" wearable. But this key design change enables a multi-sport mode: tap on the display once for running, tap on it again for biking, and so on. Fitbit has also added "connected GPS" to the Charge 2: the wristband will pull GPS data from the phone while you’re walking, running, or hiking outdoors.

The promise is great, The reality is different

The promise is great. It’s a Charge HR on steroids, a Charge HR that pushes you to do more beyond just basic step-counting and sleep-tracking.

But it didn’t fulfill that promise for me. I found notable discrepancies in distances tracked with the Charge 2 compared to GPS sport watches (something Fitbit said was due to bugs after multiple attempts to troubleshoot the issues).

First, at the most basic level, the Fitbit Charge 2 does what many other activity trackers do. It records your daily step count, stairs climbed, calories burned, distance traveled, heart rate, and sleep patterns. It will show notifications from your smartphone, like incoming phone calls and calendar alerts.

The Charge 2 also has dedicated functions for recording workouts, something that the Charge HR didn’t have. These include running, walking, hiking, biking, and elliptical workouts. There’s even an interval mode, in which the Fitbit pulses on your wrist to tell you when to stop and start an activity; I really liked this. And it will record weight-lifting sessions.

There's also a new feature called Cardio Fitness Score. It’s a combo hardware-software feature: Fitbit uses your resting heart rate, recorded with the wristband; some of your exercise data; and your profile information, to assign a heart-health score, found in the heart rate section of the mobile app. Anything over 44.9 is "excellent" for my age and gender, according to Fitbit.

But of the half-dozen distance tests I did in either Run, Walk, or Hike mode, the Charge 2 only accurately recorded one event, a 5K run (3.11 miles). Otherwise, distances were off, whether I used Fitbit’s connected GPS feature or not. A 1-mile walk was recorded as 0.71 mile on the Charge 2. A 3-mile run was recorded as 2.13 miles. A 3.6-mile hike was recorded as 3.3 miles.

To try to solve this, and partly at Fitbit’s request, I switched from a new iPhone 7 back to an older iPhone, since the iPhone 7 just came out and it was suggested that there may have been compatibility issues. Fitbit also sent me a new Charge 2 wristband. I tried that, too.

Distances were off in almost every test

Still, the distance-tracking was disappointing. Just this past weekend, a 4.28-mile hike was recorded as a 3.83-mile hike on the Charge 2 (without GPS), and it measured a 3.02-mile run as a 2.82-mile run, even while using connected GPS. Seems I’m not alone, either; some other Fitbit users have reported inaccurate distances in Fitbit’s online forums.

Fitbit initially suggested it may have been my stride length or the fact that I was pausing to walk during runs that may have been causing this. Eventually, the company said they've identified a bug in the software on Charge 2 that causes inaccurate distance estimates when using Connected GPS to track the Walk and Hike activities. With regards to some of the other discrepancies, Fitbit says the company is continuing to investigate it.

There was another software bug as well that showed an outdated distance on the display when I would first raise my wrist during a run. After lowering my wrist and raising it back up again, sometimes more than once, the reading would adjust itself.

It’s not just the inaccurate distances that befuddled me, though that has been by far my biggest problem with the Charge 2. Fitbit added a big display and multiple-sport modes to the wristband… but didn’t add a pause function. No button, no tap-to-pause option, nothing. So if you need to stop during a workout — to tie your shoe, wait for a friend, or catch your breath — you can’t. It’s also not waterproof.

Then there’s the Charge 2’s Relax feature, which guides you through deep breathing exercises. Apple introduced a similar feature called Breathe in its new Apple Watch software; though Fitbit has said its Relax app is more personalized, because it uses your heart rate to gauge your breathing rate.

But when you launch into Relax mode, which lasts either two or five minutes, the Charge 2 doesn’t offer you any kind of haptic feedback to guide you through it. You actually have to stare at your Fitbit’s display for two to five minutes to see a digital representation of your breathing, a circle swelling and shrinking in size. I don’t really meditate, but I’m certain most mediation exercises don’t begin with "Hold your gaze on your activity tracker."

Of course, you’re also buying into some good features when you buy a Fitbit, otherwise it wouldn't be so popular. The first is the software. Fitbit’s mobile app is free to use, but the fact that it’s complimentary isn’t what makes it good. It’s good because it’s agnostic. The Fitbit app works with iOS, Android, hell, even Windows Phone phones, and it runs on desktops, too, a nice inclusion of people who still don’t have or can’t be bothered with smartphones.

The Fitbit app, which was recently redesigned, has a user-friendly interface. At the top of your dashboard you’ll see your steps for the day, with arrows on either side to jump a day before or forward again; below that are snapshots of floors climbed, miles traveled, calories burned, and minutes of exercise. All of this sits on top of a series of customizable tiles that show things like heart rate, sleep data, even how much water you’ve consumed that day. (Some of this requires manual entry on the part of the user.)

Fitbit still doesn’t share its data with Google Fit or Apple Health, which not only act as repositories for health data but also share the data with other apps. Instead, Fitbit has direct data-sharing partnerships with a bunch of health and fitness apps, including Strava, RunKeeper, MapMyRun, MyFitnessPal, Weight Watchers, Lost It!, even Amazon’s Alexa app.

But to its credit, Fitbit has almost perfected the art of subtle motivation, if you could just get past how demotivating the accuracy issues are. "Overachiever!" the app practically shouts if you’ve far surpassed your daily step goal. You can also set weekly exercise goals in the app. While I was largely inspired by the need to test — and test again, and again — the Fitbit, it was nice to get that five-day exercise badge.

fitbit has almost perfected the art of subtle motivation

These slaps on the back, these virtual nudges, aren’t limited to the mobile app; they happen on the Fitbit itself, too. "Take me for a walk?" the Charge 2 pleads, in scrolling text across the display, if you haven’t moved in a while. Other times, it’s more specific with its requests: "Feed me 250 steps." Sure, I could do 250 steps, you think. That’s not much. When you hit your daily step goal, little pixelated fireworks light up the display.

The Charge 2 automatically tracks your more vigorous activities, too, even if you don’t bother to put it into multi-sport mode. (This "smart track" feature is available on a few different Fitbits now, and a lot of competing wristbands do this, too.) My bike rides to appointments or a coffee meeting showed up in the app as exercise completed, even though I didn’t "tell" the Fitbit I was doing it.

Finally, the Fitbit Charge 2 will last nearly a week on a single charge, even with its larger display and multi-sport features. That’s not as impressive as the months-long battery life you’ll get with a Garmin Vivofit or a display-free Misfit tracker, but it’s a lot better than the one-day battery life of an Apple Watch. 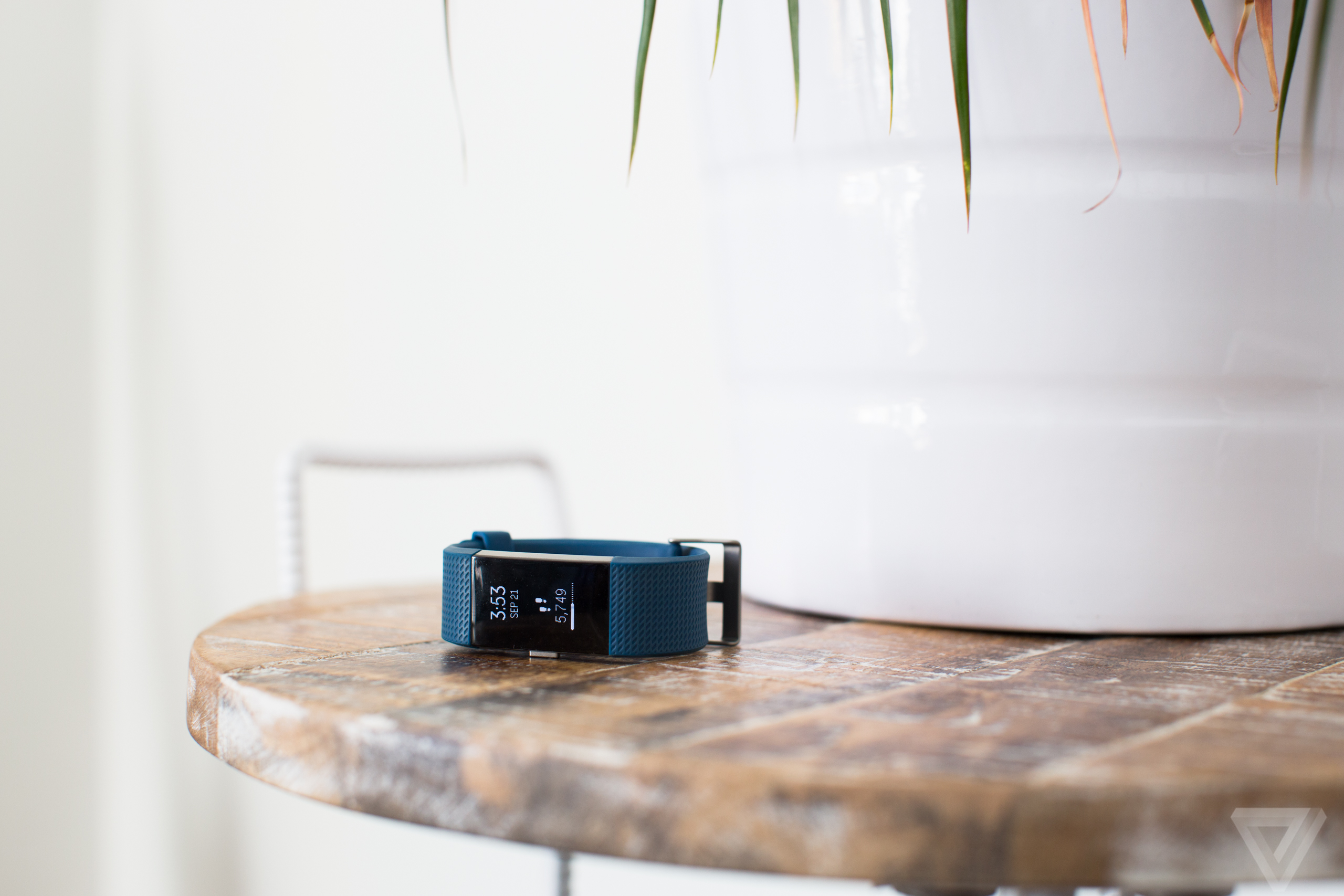 Still, it’s hard not to feel as though Fitbit’s approach to product releases this year has been more about volume than about innovation. The company has released four new wearables since the winter: the bracelet-like Alta (which I liked), the smartwatch-like Blaze, the entry-level Flex 2, and this one, the Charge 2, all of which come with a new aesthetic but improve on preexisting technology in iterative ways. The step-counting and sleep-tracking are the same. The heart rate sensors are the same, though Fitbit says it is constantly improving its heart rate sensing technology. Two of these wristbands now have "connected GPS," but in my experience with the Charge 2, that didn’t mean it was more accurate.

is an accurate tracker too much to ask for?

Fitbit says bug fixes are coming to the Charge 2, which just started shipping, and that those bug fixes will help it do one of the basic things it’s supposed to do, which is track your distances traveled. And therein lies the rub: in the world of constant software updates, firmware updates, and bug fixes, you’re supposed to be patient and wait it out (and give more of your personal data over, while you’re at it). Call me crazy, but that seems like an unfair bargain.

Update, Oct. 17, 2016: Fitbit now says that it has identified the issues with the Charge two and has issued a free software update to fix it.

"These software errors caused the tracker to occasionally calculate stats like pace and distance with less precision than we expect from our products," a spokesperson for Fitbit said via email. "We corrected these issues through a free software upgrade available to all Charge 2 users."

Fitbit also underscored that the company "has performed and continues to perform internal studies to extensively test the accuracy of" its products, and that it believes that it's health and fitness trends over time that matter most to its users.

The Verge has not yet had the chance to re-test the fitness tracker and verify the company's claims. We will continue to update this review as needed.