You can shove those AirPods straight up...

Apple’s dismissal of the headphone jack today was arrogant, but expected. Phil Schiller smugly waved away decades of headphone development as just some analog artifact, denigrating the universality of the 3.5mm connector as some "ancient" concept. But hey, I was ready for that. I’ve spent this entire year preparing myself for Apple slicing off the classic port and replacing it with something else. Something hopefully better.

I was not ready for the revenge of the fucking Bluetooth headset.

Think of the most obnoxious business suit you’ve ever met and you’ll inevitably picture some Bluetooth dongle jabbed into his ear, pulsing out blue light at you and soaking up grease from his slicked-back hair. Well, Apple’s now got two of them, calling them AirPods, and it’s asking a lofty $159 for the privilege of taking your EarPods wireless.

Of course, Apple’s prettifying the whole concept by obfuscating its use of Bluetooth Low Energy under the branding of a W1 wireless chip while also sexing up the 5-hour battery life by claiming it goes up to 24 hours if you use the accompanying recharging case. Just 15 minutes in the case will get you three hours of listening time! As my colleague Micah Singleton notes, however, "0 minutes in the case gives me unlimited listening time with my wired headphones." 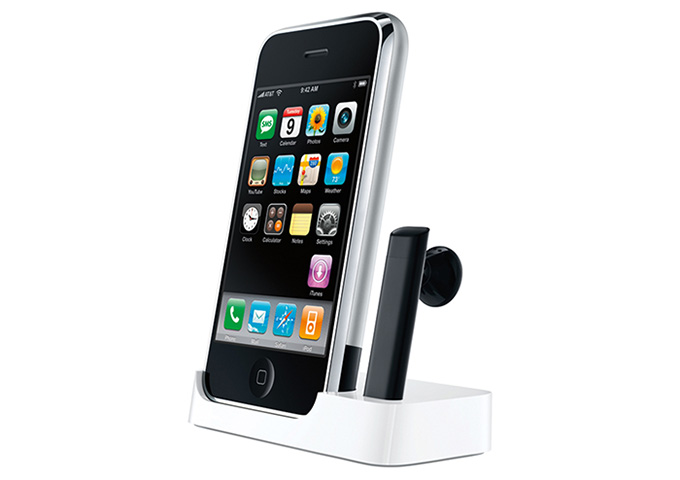 Yes, yes, I know Apple’s introducing Lightning-connected EarPods and bundling a Lightning-to-3.5mm adapter with every new iPhone. But EarPods are a bad thing on this planet, their sound quality is terrible, and Apple is claiming it took "courage" to move beyond the old school jack. For what, Apple? Your claims of superior sound quality are about as thin as your iPhones. The AirPods don't sound any better than the EarPods.

"When you have a vision of how the audio experience can be," says Schiller, "you wanna get there as fast as you can, and make it as great as it can be. And we do have a vision for how audio should work on mobile devices ... Wireless." So basically, let's not bother improving the EarPods at all, but rather let's make it more convenient to listen to a bad reproduction of your music. And how much more convenient are the AirPods, really, when the few people who find them affordable will also be losing them on a regular basis? The wire that Apple hates so much serves more than one purpose.

AirPods cost $159, which is a very courageous price.

I’m offended right now and I’m not alone. Apple’s lofty aspirations for delighting the user needed to be underpinned by some legitimate move toward improving sound quality. Bundling actually good earphones with a smartphone isn't that hard anymore, as evidenced by HTC, LG, and most other Android manufacturers. Tim Cook closed today’s iPhone event by saying "music is at the core of our DNA," but Apple doesn’t seem to care about the quality of the music that it pumps out at us. Maybe it’s more accurate to say that selling music is at the core of Apple’s DNA. Anyone that knows what music is supposed to sound like knows that the EarPods are a poor conduit for it. Using the more capable Lightning connector to just inflict that same old abomination on people is almost Machiavellian evil.

Apple’s frenzied effort to make everything wireless isn’t without its merits, and I firmly believe that we need big influential companies like it to push the tech industry forward. But this brazen shrugging off of one of the last remaining truly universal connectors is upsetting. Apple's replacing instant compatibility with all the world's headphones by offering us either a dongle, the same old EarPods with a new cable, or expensive EarPods with no cable at all.

Had Apple done something, anything, to help improve sound quality for the masses — which upgraded Lightning EarPods would have been a step toward — then the loss of the headphone jack would have at least been partially justifiable.

Don't kill a good thing if you don't have a better one waiting, Apple. That's all I ask.

More from this stream Apple's iPhone 7 event: all the news from the big announcement