Look, there are some things that will happen with this review that are outside of my control. Firstly, if you’ve ever seen an episode of Doctor Who, or if one has even aired somewhere in your vicinity, you’ll exclaim that this Bang & Olufsen speaker looks just like a Dalek. If you need time to make up a silly pun to celebrate that resemblance, please take a moment. I already have.

The other thing that will inevitably happen is you’ll guffaw at the price of $1,995. Most people can outfit their entire homes with Sonos speakers for less than this single chunk of B&O equipment costs. The BeoSound 2 is a hard sell as a regular 360-degree wireless speaker, because there are just so many competitive options out there. But the thing with Bang & Olufsen is that this company never tries to merely convince you through mere functionality. It does functional design, yes, but ultimately B&O is as much in the home furnishings and decoration business as it is in the tech realm.

Buying one of these speakers is as much about the highly distinctive aesthetics as it is about the musical performance. Over the two months I’ve had one for review in my home, the BeoSound 2 has attracted admiring looks, smiles, and questions about what it even is. It has also produced brilliant sound that’s left me deeply satisfied.

If we start with the design, the BeoSound 2 is a tapering cylinder that measures 43cm (nearly 17 inches) in height and 4.1kg (nine pounds) in weight. There are discreet ports in its base for an Ethernet cable or a 3.5mm analog audio connector. The primary method of connecting to it, though, is intended to be wireless: whether through Apple AirPlay, Google Cast, DLNA, Spotify Connect, or simple Bluetooth 4.1 pairing. Inside the thick aluminum shell reside four speakers: one tweeter, two for the midrange, and one large woofer to provide low-end rumble.

The thing that will be hard to see in photos or appreciate from afar is just how good the B&O construction is. This is the first proper Bang & Olufsen product I’ve yet reviewed — all of the headphones I’ve had from the company have come from the more consumer-oriented B&O Play sub-brand — and it’s left a very positive impression on me. The aluminum BeoSound 2 enclosure looks smooth from a distance, but it actually has an almost microscopic pattern of horizontal ridging that gives its surface an appealingly rough texture. I can’t offer a functional reason for why this might be better, but it’s certainly different. There’s no chance of you accidentally coming across a surface that feels like this in your everyday life, and that just enhances the sense of alien technology that’s already conveyed by the visual design.

I really like the portability and adaptability of this speaker. It’s just as much at home residing on a living room floor as it is on a kitchen table or a bedroom desk. And when I want to move it around, its shape is convenient enough to carry with just one hand.

The volume control is an infinitely rotating knob at the top of the unit, which sits atop a thing Bang & Olufsen calls an acoustic lens. Basically, the tweeter fires down and its output is then diffused outward by the clever architecture of B&O’s design. This is an approach the company favors with its flagship speakers, too, though I’m still not convinced that it’s necessary strictly for acoustics. I’m pretty sure the flamboyance of the appearance is part of the deal.

Behind the 360-degree grille that wraps around the BeoSound 2, you’ll find the two midrange speakers, mounted back to back in order to provide the fullest and widest sound. The woofer is at the bottom, mounted upside down so as to make use of the full capacity of the cabinet. I’m describing these details without critiquing them, because I happen to agree with everything B&O has done in terms of acoustics. Every company will tell you that its design is optimized and optimal, but in the case of the BeoSound 2, the eventual performance really does agree with the marketing spiel about thoughtful design. This speaker can fill large rooms with sound easily, and it doesn’t feel like a single-point audio source either.

I find the BeoSound 2 sound lush. Take note that I’m not calling it accurate, neutral, faithful, or any of those other terms that are used to describe boring speakers. If this were a display, it’d be a richly saturated OLED screen that embraces its vividness rather than being embarrassed by it. There’s a real sense of dynamism and muscle coming out of this speaker. The bass is exaggerated and oh so satisfying. I make no apologies for loving this big bottom end. Watching movies, playing games, and listening to modern electronic music through the BeoSound 2 is just a pleasure. The elevated bass makes explosions and bass drops feel hefty and impactful, but it doesn’t impinge on the mids and highs in a way that would disturb or undermine vocals or on-screen dialogue.

Fans of classical or acoustic music would not be well served by a tuning such as the one Bang & Olufsen has devised for the BeoSound 2. If you want to hear the intricate detail of tweeting birds in a Japanese garden as a heartbroken ronin mournfully plucks the strings of a lute, you’re probably better off looking elsewhere. If, on the other hand, you just want to immerse yourself in some hour-long deadmau5 mix with a throbbing bassline, this B&O speaker is one of the best for that task. This isn’t a thinking person’s audio system, it’s a lazy person’s shortcut to just enjoying the simple pleasures of music.

This is an indulgence: of the senses and the wallet

Bang & Olufsen has a multiroom wireless solution and there’s a bevy of options for connecting up the BeoSound 2 to streaming apps and services, but I primarily used the wired and Bluetooth connectivity. As a PC speaker, this Dalek lookalike did a surprisingly good job, though I found myself preferring the wired connection to avoid lag between the video and audio. You can even game with it, though obviously you won’t get the same surround sound as you might from a multi-point speaker system or some good headphones. I just like that it worked at all. As for more casual music and radio listening, the BeoSound 2 gives me no reasons to complain. The top of the unit functions as a play-pause button, too, so I can do the essential volume and play toggling just with the hardware on the speaker.

As Bluetooth speakers go, this Bang & Olufsen one is surely among the most indulgent. And if I could tell you that I can get the same sound pleasure out of some other competing speaker, I’d say B&O has overshot its pricing and needs to be more competitive. But I’ve listened to the entire range of Sonos speakers, I’ve spent a long time with the $999 Naim Mu-So Qb, and I’m familiar with the majority of other competitors, too. None provide me with the warm, enveloping sound of the BeoSound 2, none play to my musical tastes in quite the same way.

We can joke about its robot invader appearance and we can poke fun at its $1,995 price (because, come on, who’s paying that much for a wireless speaker?), but we shouldn’t dismiss the BeoSound 2 as a bad product. Bang & Olufsen could have given us some anodyne, Bose-like sound and just relied on its branding and stellar reputation for aluminum craftsmanship to carry the BeoSound 2 sales into the luxury segment. But the company opted to win on sound quality as well: not by being the most faithful, but by being the most fun. The end result is a speaker that’s as desirable as it is unaffordable.

Our review of Bang & Olufsen BeoSound 2 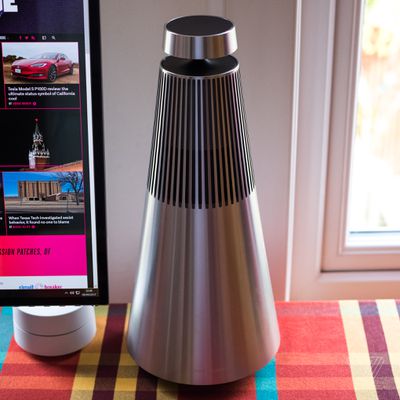