Harman Kardon Invoke review: Cortana gets a speaker of its own

A smart speaker for Microsoft’s world

Share All sharing options for: Harman Kardon Invoke review: Cortana gets a speaker of its own

For a company that makes a voice-controlled assistant, it has become table stakes to have a smart speaker for the home that uses it: Amazon’s Alexa debuted on the Echo smart speaker three years ago, Google now has a complete lineup of Home speakers that use the Google Assistant, and Apple’s forthcoming HomePod is powered by, you guessed it, Siri.

Not one to be left out of the party, there’s now a smart wireless speaker that uses Microsoft’s Cortana assistant. The $199 Harman Kardon Invoke is not hugely different than the Amazon Echo or Google Home. It has seven far-field microphones to hear your voice commands from across the room. It has a circular light on top that illuminates when it hears its wake word or is responding to a request. And it can be used to deliver facts, perform unit conversions, set timers or alarms, look up directions, control smart home gadgets, or add things to a to-do or shopping list.

The Invoke can also be used to listen to music, and this is where it separates itself from devices from Amazon and Google. The Invoke has more powerful speakers than either of its competitors, and, as a perhaps obvious result, it sounds a lot better than the Echo or Home. Since Amazon itself admits that the thing people use the Echo for more than any other is to listen to music, the Invoke’s improved audio experience is definitely appreciated.

But that experience comes at a cost, and the price difference between the Invoke and the others is not insignificant. Further, while Cortana is a capable virtual assistant, it’s clear that this device is Microsoft’s first effort in this space, and it has some catching up to do with Alexa and Google’s Assistant.

In terms of design, the Invoke is most similar to the first-generation Echo from 2015. It’s a roughly four-inch diameter cylinder that’s just under 10 inches tall, with a tapered design that gets narrower at the top. The finish is definitely a step up from Amazon’s offering, with a more attractive speaker grille and a chrome bevel at the top that catches light nicely. It is available in black or white color options, both of which should look nice in a modern home décor.

The only physical controls on the Invoke are the volume ring at the top (which effectively works identically to the first-gen Echo’s, but has smoother damping), a touch-sensitive pad on the top, and the mute and Bluetooth buttons on the back. The Invoke can be used as a standard Bluetooth speaker, but it cannot connect to a larger speaker either over Bluetooth or with an aux cable like the newer Echo devices can.

Not that you’d have much of a reason to hook the Invoke up to another speaker even if it could. Under the speaker grille are three 1.75-inch midrange drivers and three 0.5-inch tweeters, arranged in an outward-facing circle to provide 360 degrees of sound. The Invoke doesn’t have a subwoofer, but there is a passive radiator to enhance the bass. All of this is pushed by a 40-watt amplifier, which Harman Kardon boasts is more powerful than any of its direct competitors.

This speaker array makes the Invoke much nicer to listen to than the Echo (even the new and supposedly improved model) and the Google Home. It fills a room with sound much better than either of those speakers, and though it won’t be suitable for bumping a house party, it has actual bass response, which is all but non-existent in the others. The Invoke’s only real competitor here is the equally priced Sonos One, which is louder still with even better bass.

The touch-sensitive pad at the top of the speaker will illuminate with a blue-and-white circle whenever the “Hey Cortana” wake-up command is said. It will shine red when the speaker is muted, and it will display a white ring when you adjust the volume. It’s easier to see across the room than the lights on the Google Home, but the Echo’s brighter ring is better still.

You can tap the top of the Invoke to pause music that’s playing or cancel a command. If you tap it when the Invoke isn’t doing anything, Cortana will serve up a random fact.

But like the Echo and Google Home, the main way you’re supposed to use the Invoke is through voice commands. It’s very good at hearing my voice from across the room, even while music is playing, and it rarely failed when I barked a command at it. It only responds to “Hey Cortana,” however, and you cannot change it to a different wake word. Saying “Hey Cortana” every time is more tedious than the Echo’s simpler “Alexa” command, especially if you’re saying it multiple times in a row to perform different actions.

At launch, the Invoke works with Spotify, TuneIn, and iHeartRadio, with support for Pandora promised to come. I was able to pull up specific albums or playlists from my Spotify account, and even save new tracks to my library or follow a playlist with just a voice command. The Invoke wasn’t able to find everything, however, and it tended to fall back to a generic artist playlist when it couldn’t find the specific album I asked for. Other music services can be played via Bluetooth, but voice commands are limited to volume control and pause / resume / next / previous track control in Bluetooth mode.

As a personal assistant, the Invoke is most useful if you already live in Microsoft’s ecosystem. It can pull up calendar information from Outlook.com and Office 365 accounts, and it can add items to a to-do list in the Cortana app on a phone or Windows 10 computer. You can even ask the Invoke to remind you at a specific time or location and your other devices will light up when the task is due. But if you use other services for your calendar, Cortana can’t access them at all, which meant it couldn’t see any of the calendar appointments in my Google Calendar account. It also couldn’t access or control my to-do list or shopping list in Todoist, which I’m able to do with either the Echo or Google Home.

For smart home control, the Invoke works with SmartThings, Philips Hue, Nest, Wink, and Insteon out of the box, which covers a large number of smart home gadgets. I was able to voice control my lights with Hue or SmartThings using the Invoke, just like I can on the Echo or Google Home. Microsoft says it is working with Honeywell, Ecobee, TP-Link, Johnson Controls, IFTT, Geeni, Iris by Lowe’s, and iDevices to add support for those products and services in Cortana.

The Invoke can also be used to place calls, using Microsoft’s Skype service. The company says it’s Skype certified for conference calling, but it my tests, callers were distant and they had trouble hearing me, so it wasn’t a great experience. The Invoke cannot be used as a Bluetooth speakerphone for standard calls, which is probably for the best given my experience with the Skype calling feature.

Beyond those music and productivity functions, the Invoke can be used to answer facts and trivia; provide weather forecasts, news updates, and traffic information; and provide some quick entertainment, such as telling jokes or poems. It’s not unlike Alexa or the Google Assistant in this respect, and it didn’t have any trouble performing unit conversions or telling me when the local Home Depot closes and how long it will take me to get there when I asked.

Aside from the fact that it works best with Microsoft’s own services and doesn’t support others, Cortana’s biggest limitation is that it can only support one account at this time. Calendar information, reminders, and to-dos will all be pulled from the account the Invoke was set up with, which makes it difficult to use as a shared device for those functions. Both Alexa and Google’s Assistant have added features that attempt to identify the person making the voice request and serve up personalized information to them. And while the Invoke does sound good on its own, it can’t be paired in stereo or be used in a multi-room system, like Google, Amazon, or Sonos speakers can.

And then there’s the cost: the Invoke is twice as expensive as Amazon’s new Echo, $70 more than the Google Home, and the same price as the new Sonos One, which sounds better and has more flexibility with multi-room setups. If you just want a simple voice-controlled smart speaker, it’s hard to argue with Amazon’s Echo, and if you care deeply about sound quality, the Sonos One (which has Alexa built in) is probably a better option.

But if you do live in Microsoft’s world and sound quality has some importance to you, there’s a lot to like about the Invoke. It’s further along than where Amazon or Google were at their debuts, and it already does a lot of things you want a smart speaker to do. Plus, it doesn’t compromise on sound quality quite as much as the others.

If Microsoft is able to deliver those promised improvements and perhaps make Cortana work better with non-Microsoft services, the Invoke could be a compelling smart speaker for the rest of us.

Our review of Harman Kardon Invoke 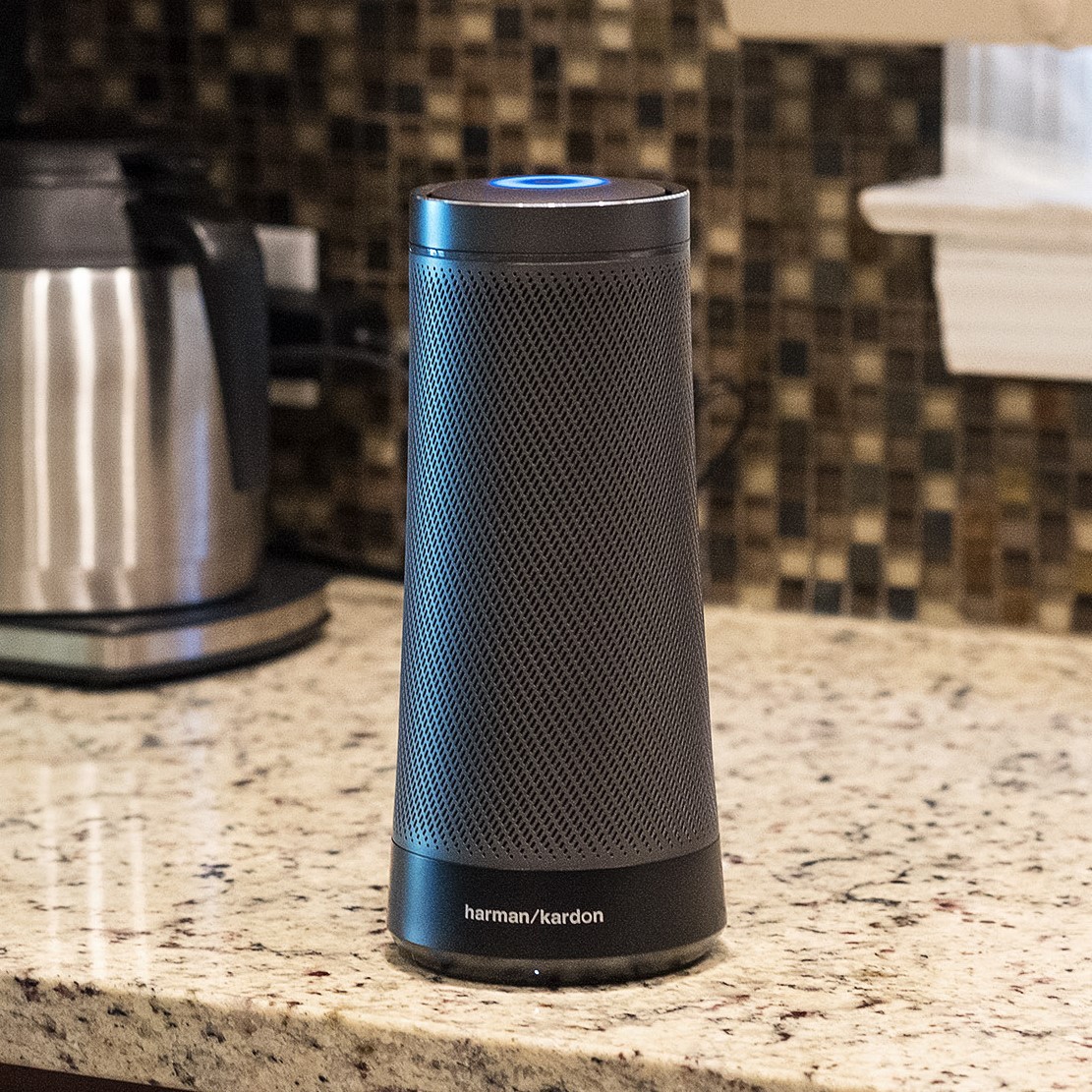