Technically none of the lights

Amazon made a big splash when it announced the new $70 Fire TV. It’s a tiny powerhouse of a media streamer, with a 1.5GHz dual-core processor, support for 4K HDR streaming, and Dolby Atmos support. (There’s no Dolby Vision HDR, however.) It felt like a direct shot at the new $179 Apple TV 4K, and in practice, it’s definitely the closest competitor to Apple’s box, with a polished interface and tight Alexa integration that Roku boxes can’t really match. But as usual, specs don’t tell the whole story here.

Following the general trend in media streamers, the new Fire TV has gone from a large external box to a dongle that plugs directly into your TV. (Confusingly, both the old and new devices are simply called “Fire TV.”) The black square is oriented like a diamond, with the HDMI plug coming off a corner and a Micro USB plug for power recessed into the opposite corner. It’s all perfectly blank, save for the Amazon logo; there’s no power LED or status lights, which I would have appreciated during setup.

The new Fire TV is also larger and weightier than competing 4K HDR dongles like the Chromecast Ultra. I wouldn’t say it’s heavy, but it’s definitely substantial — enough so that I worried about the weight pulling against the HDMI ports on my TV and receiver. Amazon told me it was tested on a variety of TVs, and it’s well within the HDMI spec for connector strength, but if I was installing it permanently I’d think about holding it up with some Velcro or tape to be safe.

Why does anyone think volume buttons are an acceptable omission from a remote?

The included remote is pretty basic, but it’s also nicely sized and far more intuitive and user-friendly than the Apple TV remote. I do wish the button to activate Alexa and the home button were flipped — I constantly pushed the Alexa button when I wanted to go home — and the lack of volume controls on the remote is inexcusable. Amazon says some TV remotes can control the Fire TV over HDMI-CEC and Harmony remotes that support Bluetooth work, but the included remote is the only remote that has an Alexa microphone. You’re going to end up having two remotes on the table one way or the other. Roku just updated most of its remotes to deal with this issue. I have no idea why anyone thinks volume is an acceptable omission from a TV device remote.

If you have just a single Fire TV, the pairing process with an Echo is delightfully simple: you don’t have to do anything. You get everything set up on the same network and simply ask Alexa to do something TV-related, like “Play Transparent.” Alexa will discover and pair to the Fire TV, and you’re off and running. If you have more than once Alexa device and more than one Fire TV, you can use the Alexa app to pair them up as you wish.

Using Alexa on the TV worked great, but there’s some basic stuff it can’t do, like set timers or change the TV volume. Integration with my Echo Dot was also hit-or-miss: “Play Transparent” worked consistently, but I could never get “Play Lore” to actually play the show. Instead, Alexa played a song called “Lore” from Spotify on the tinny Echo Dot speaker.

And while Alexa on the Fire TV itself can deep search for content, other Alexa devices can’t, so “Play Mindhunter” and “Play Mindhunter on Netflix” both failed when I tried it with my Echo Dot. The first showed me a show called Hunter, and the second resulted in Alexa saying “I couldn’t find a device called Netflix.”

This is the same sort of assistant fragmentation that plagues Siri on the Apple TV and iOS devices, and it’s just as annoying here. But having my entire home theater light up and play a show just by talking to my Echo Dot was a revelation. It’s way ahead of anything else on the market.

Google Assistant can do something similar with a Chromecast, but having an actual user interface made the Fire TV experience far superior: you can actually see what it’s doing, and it feels like it’s actually responding to you. It’s great. Integrating TV into a smart home setup is usually one of the hardest pieces of the puzzle, but the new Fire TV makes it dead-simple if you’re an Alexa user.

Speaking of the interface, it’s easily the closest competitor to the Apple TV out there. It’s smooth, it’s polished, apps feel well-integrated, and everything runs quickly on the dual-core processor. It’s well ahead of the Roku, and only behind the Apple TV in extremely minor ways. For example, Apple makes every app use its (terrible) tvOS keyboard, but Netflix and YouTube on the Fire TV use their own distinct keyboards. You won’t notice unless you’re looking. For $70, it’s definitely good enough to make the $179 Apple TV 4K and Nvidia Shield seem overpriced.

(Not quite) all of the lights

Of course, the big upgrade for the new Fire TV 4K is HDR and Dolby Atmos audio support — but it’s not what you might expect.

The TV world is full of acronyms and standards. Here are the important ones:

4K: The next bump up in resolution. It’s four times the number of pixels as HD. But if you want to get all technical, it’s generally 2160p.

HDR10: There are two competing HDR standards. Every HDR TV supports HDR10, which is free to use, and some companies, like Samsung, only support HDR10 on their TVs. HDR10 sends static metadata information about the average and peak brightness of a given video to your TV.

Dolby Vision: This is Dolby’s proprietary HDR system that costs money to license. It’s supported by Apple, LG, Vizio, TCL, and some Sony TVs. Most people (including me) think Dolby Vision looks way better than HDR10. It sends brightness metadata dynamically as the video plays, and supports brighter and more colorful video.

Dolby Atmos: Atmos and its competitor DTS:X are the next generation of surround sound formats, which the industry calls “object-based surround.” Unlike traditional surround, which sends specific tracks of audio to specific speakers, Atmos allows audio engineers to place sound “objects” in 3D space, and your receiver or soundbar figures out how to re-create it.

First of all, Amazon’s catalog of 4K HDR movies is far smaller than its competitors. Apple’s upgrading iTunes purchases across its catalog to 4K HDR for free, and Roku owners can use Vudu, which offers virtually every new movie in 4K HDR but isn’t available on the Fire TV. I bought Wonder Woman, Baby Driver, and Guardians of the Galaxy 2 in 4K Dolby Vision from Vudu and synced them across platforms with the new Movies Anywhere service, but they all played in 1080p on the Fire TV, and none of them were available to otherwise buy or rent in 4K HDR.

That limited movie catalog means you’ll be mostly watching streaming TV in 4K HDR on the Fire TV: Amazon shows like Transparent and The Grand Tour, and Netflix stuff like Glow and Jessica Jones. YouTube also supports 4K HDR on the Fire TV, which is a plus over the Apple TV.

There’s also precisely zero content available with Atmos on the Fire TV right now. Movies that have Atmos soundtracks on other services, like Baby Driver, simply play back in Dolby Digital Plus on the Fire TV. Amazon tells me that the hardware supports Atmos and that it expects app support to be added over time, but right now it’s just not there.

It’s also worth noting that the Fire TV only supports HDR10, not the higher-quality Dolby Vision HDR standard. If you’re like me and you’re looking to light up both the Dolby Vision and Dolby Atmos lights on your home theater setup, this isn’t the box for you.

On the plus side, Amazon has figured out how to mix Alexa’s voice into a Dolby Digital Plus stream, which Apple hasn’t sorted out how to do with Siri on the Apple TV. And the Fire TV doesn’t run in HDR mode all the time and make regular video look strange like the Apple TV 4K. It runs in 60Hz 4K and switches to HDR as necessary, which worked just fine on my 2016 LG OLED TV and the cheap-o Samsung 4K HDR set in our office.

Basically, if you spend the majority of your time watching TV, you’ll be fine. But if you’re looking for the ultimate movie streaming device, you’ll need to look elsewhere.

The new Fire TV checks almost every box you’d want in a modern media streamer: it’s small, it’s fast, it’s relatively inexpensive, and it has a powerful voice assistant tied into a beautiful interface. And it’s extremely cool to connect an Echo device to your TV. (The entire industry should take a page from Amazon’s playbook here.)

But none of that matters if the content isn’t there, and Amazon just doesn’t have a large enough library of 4K HDR movies, or anything at all that supports Atmos. It’s all the right specs without enough content that can take advantage of it, and you can make different trade-offs and get more stuff to watch.

The $179 Apple TV has a huge 4K HDR library with the cheapest movie prices, but doesn’t support Atmos and is far more expensive upfront. The new $70 Roku Streaming Stick Plus has a far less polished interface, but it supports both HDR10 and Atmos, has access to Amazon’s shows, and has a Vudu app with a large catalog of 4K HDR movies. The $70 Chromecast Ultra supports both Atmos and Dolby Vision, but you’ll have to deal with using a Chromecast. The $179 Nvidia Shield offers endless configuration options, and has a devoted and vocal following among power users.

That might seem like a lot of choices, but I think it’s exciting. Honestly, these things are getting cheap enough that you could spend $70 on the Fire TV now with the full expectation that you’ll upgrade again in a year or two, and if you’re excited about Alexa it might be worth it. But I would stay tuned for our Roku review next week. 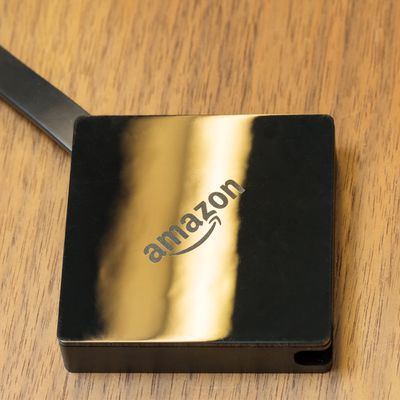