Microsoft Surface Book 2 review: beauty and brawn, but with limits

Share All sharing options for: Microsoft Surface Book 2 review: beauty and brawn, but with limits

Editor's note, November 27th, 10:30AM ET: When we originally tested the Surface Book 2, we noticed extreme power drain issues. Microsoft replaced the power supply, and we haven't experienced the same issues with the replacement part. This review and score have been updated to reflect this.

I always wanted Microsoft to build a laptop, and it finally went ahead and built one without any tricks earlier this year. The Surface Laptop has no gimmicks, no kickstand, and no detachable screen. It’s simply the best laptop you can buy right now.

So this raises the question: why has Microsoft created another heavy, gimmicky, yet powerful Surface Book? The answer lies in who the Surface Book is for, and it’s certainly not for everybody.

The best match for Microsoft’s new Surface Book 2 is Apple’s MacBook Pro. Providing an answer to Apple’s option, but with Windows-specific strengths like a touchscreen and detachable display, is really why the Surface Book 2 exists. The new 15-inch model goes one step further in matching and even beating Apple’s latest MacBook Pro lineup on paper. It’s a hefty and powerful laptop just like the original. It’s also a tablet, thanks to that detachable display. Its high-end graphics card and support for Xbox controllers also make it a miniature Xbox One for gaming on the go. Believe it or not, the Surface Book 2 is the first portable Surface computer that you can actually play the latest games on, but it’s more complicated than just that.

Starting at $2,499 ($1,499 for the 13.5-inch model), the 15-inch Surface Book 2 is $100 more than a comparable MacBook Pro and is at the very high end of the laptop market. The top model with 1TB of storage is $3,299, so you’re going to spend a lot of cash if you want this new 15-inch version. Is it worth the high price for what the Surface Book 2 offers, or is this just another laptop / tablet hybrid that overextends itself with gimmicks?

Visually, the Surface Book 2 looks identical to the first Surface Book. There’s a big — not MacBook Pro giant, but still big — trackpad, an awesome keyboard, and a sleek silver magnesium finish. The Surface Book was always an oversized 13.5-inch laptop that felt like it was edging closer to a 15-inch machine, and for that reason the larger size strangely feels familiar. Sure, it’s bigger in your lap, it’s heavier, and the screen is much larger than a typical ultrabook, but you’re also getting a lot more power under the hood.

The 15-inch screen maintains the typical quality I’ve come to expect from Surface hardware, with great color reproduction and viewing angles. It’s also nearly 4K now (3240 x 2160), and maintains the 3:2 aspect ratio that makes it great for reading or writing. Beneath the display is the same fulcrum hinge from the original Surface Book that stretches around the base and has the same weird gap when you close it. It functions almost identically to the original Surface Book, allowing you to remove the display and use it as a tablet.

Typing on the Surface Book 2 keyboard is a joy. It’s a far better experience than smaller laptops as there isn’t any flex underneath the full-travel keys, and the spacing just feels solid. It’s largely the same as the original Surface Book, but Microsoft hasn’t tried to fix something that isn’t broken here.

The ports are also mostly the same, except for the addition of USB-C. This is the first Surface product to feature USB-C, but strangely, Microsoft hasn’t added Thunderbolt 3, so you still can’t use external GPUs or other higher-speed peripherals. It’s infuriating that Microsoft is ditching DisplayPort without adding Thunderbolt 3, but you can at least use the USB-C port to charge the Surface Book 2. You’ll need a powerful wall charger to do this, though, as a regular phone charger won’t be enough.

While the outside is very familiar, inside, the Surface Book 2 is where you’ll find all of the improvements, and they add up to a big difference over the prior model. Microsoft is finally using quad-core processors (that latest generation i7 versions from Intel) and a proper discrete graphics chip in the form of Nvidia’s GTX 1060 for the 15-inch version. (The 13-inch model can be equipped with either integrated graphics or a GTX 1050.) The processor bump will help performance in gaming, video editing, and other CPU-intensive tasks. I’d say it’s hard to spot in regular use of apps and browser sessions, but it will certainly make a difference elsewhere in processing images or video.

The addition of a real Nvidia graphics card is the most exciting change to the Surface Book 2 for me personally, alongside Xbox Wireless support. The Nvidia GTX 1060 supports VR gaming. Due to the 2-in-1 nature of the Surface Book 2, the Oculus Rift or HTC Vive aren’t officially supported. You can still use Microsoft’s latest Windows Mixed Reality headsets for basic games, though. That’s great if you’re interested in basic VR experiences, but the Surface Book 2 also handles the latest non-VR games.

I’ve played Overwatch, PlayerUnknown's Battlegrounds, and Destiny 2 on the Surface Book 2 and it handles all three really well. I’ve been using an Xbox One controller (without Bluetooth) on the go, and just bundling it in my bag alongside the Surface Book 2. Obviously in a game like Destiny 2 you’ll have to adjust settings or resolution to get a solid 60 fps, but even at the native resolution on medium settings I was getting around 50 fps. That’s solid enough for mobile gaming, and you can drop the resolution if you need a more competitive advantage. One thing you will need to do is make sure Windows 10’s power settings are set to maximum performance, as for some reason Microsoft has set them to best battery life even when the Surface Book 2 is plugged in. If you don’t adjust this slider then throttling will occur and frame rates will dip massively in games.

One issue I did run into with the Surface Book 2 is the power supply. Microsoft has only supplied a 102-watt charger with a machine that has an Nvidia GTX 1060 inside. Most similar laptops are gaming ones that have 150-watt or even 200-watt power supplies. There are two batteries inside the Surface Book 2, one in the base and one in the tablet portion (screen) itself. I originally noticed a problem with the base battery discharging too quickly with the supplied charger, meaning the Nvidia card (located in the base) disconnected in the middle of a long gaming session. Microsoft swapped my power supply as it was faulty, and I was never able to reproduce the same disconnect problem.

Despite the power supply replacement, I was still able to get the Surface Book 2 to drain battery even when connected to the wall. This was only under extreme heavy load, and most games can’t push the Surface Book 2 to start discharging. I don’t think this will be an issue for most people, but it’s something to be aware of in case you’re going to use this as your main PC hooked up to monitors and really putting pressure on the CPU and GPU.

Gaming is the only time I have really heard the Surface Book 2’s fans. Depending on what you’re doing, if you slide the power settings to maximum performance then the fans will immediately kick in. They’re noticeable during games or other GPU / CPU-intensive tasks, but they seem to do the job as the base of the Surface Book 2 doesn’t get too hot. I’ve never heard the fans while I’m working in Office apps or browsing the web, though.

Obviously, gaming without being plugged in will kill battery life. I found that I got around nine hours of battery life with mixed usage of apps for work, and no gaming involved. I haven’t had enough time to fully test the battery life of the Surface Book 2 in various modes, but we’ll update this review if the average strays far from the typical nine hours I’ve experienced so far.

Aside from the obvious screen size change (if you opt for the 15-inch model) and performance improvements, there’s very little change elsewhere. The Surface Book 2 is more of a refinement over the original, which means some of the original issues have been ironed out and some haven’t. Microsoft says the screen should detach quicker with the Surface Book 2 and there should be less wobble with the display, but I’ve found no meaningful difference in my use.

The unsightly hinge gap when you close the Book 2 is still there, and the wobble when you touch the display still exists. I was hoping Microsoft would redesign the Surface Book to be more similar to the new Porsche Design laptop, but despite internal changes it’s still mostly the same. Lap use with the 15-inch feels more balanced this time around though, so I’m not concerned it’s as top heavy and will rock forward on my lap.

If you do detach the display, it’s surprisingly light. Although it’s nearly two pounds, the weight feels evenly distributed on the 15-inch display and there’s something weirdly fun about using such a huge display as a giant tablet. It’s not something I’d do regularly, but it’s a nice option if you really need it.

I’m impressed with how much Microsoft has packed into the Surface Book 2, but it’s frustrating that I can’t always use its power to the max. I recently built a dedicated gaming PC, and yet if this Surface Book 2 came with a better power supply I could easily use it as my main PC hooked up to my monitors to play the latest games or get video editing done quickly without worrying the battery could drain. I could never imagine doing that with the prior Surface Book (or any other portable Surface computer, for that matter), as it’s just not powerful enough.

That’s why the Surface Book 2 exists. It’s a portable desktop PC, and one that takes on and beats the MacBook Pro in many areas that matter: a higher-resolution display, a better processor, more powerful graphics card, touch / stylus support, and all in roughly the same dimensions as Apple’s competitor. The Surface Book 2 is a powerful beast of a laptop that’s a showcase for all the good advantages that Windows has over macOS, but the power supply issue holds it back. If you don’t care about touch, stylus support, or even the tablet ability, then there’s probably still something here that will appeal. I personally love using this as a miniature Xbox now, and that’s something I couldn’t do with a MacBook Pro that doesn’t support the latest PC games — just don’t expect this to be a gaming laptop.

Dell’s XPS 15 made big Windows laptops cool again last year, and the Surface Book 2 sets the benchmark for what should be inside. I’d still like to see Microsoft refine the design more to address the hinge and screen wobble fully, and pack in a better power supply. It’s surprising to see the same design after two years, and I was expecting bigger refinements and changes.

The real decision with the Surface Book 2 is whether you need this amount of power, and if you’re willing to spend the cash. If you do, then you’re probably deciding between a MacBook Pro and a Surface Book 2. That’s a decision that’s more about platform preference than hardware, but Microsoft just made it a lot more difficult.

Our review of Microsoft Surface Book 2 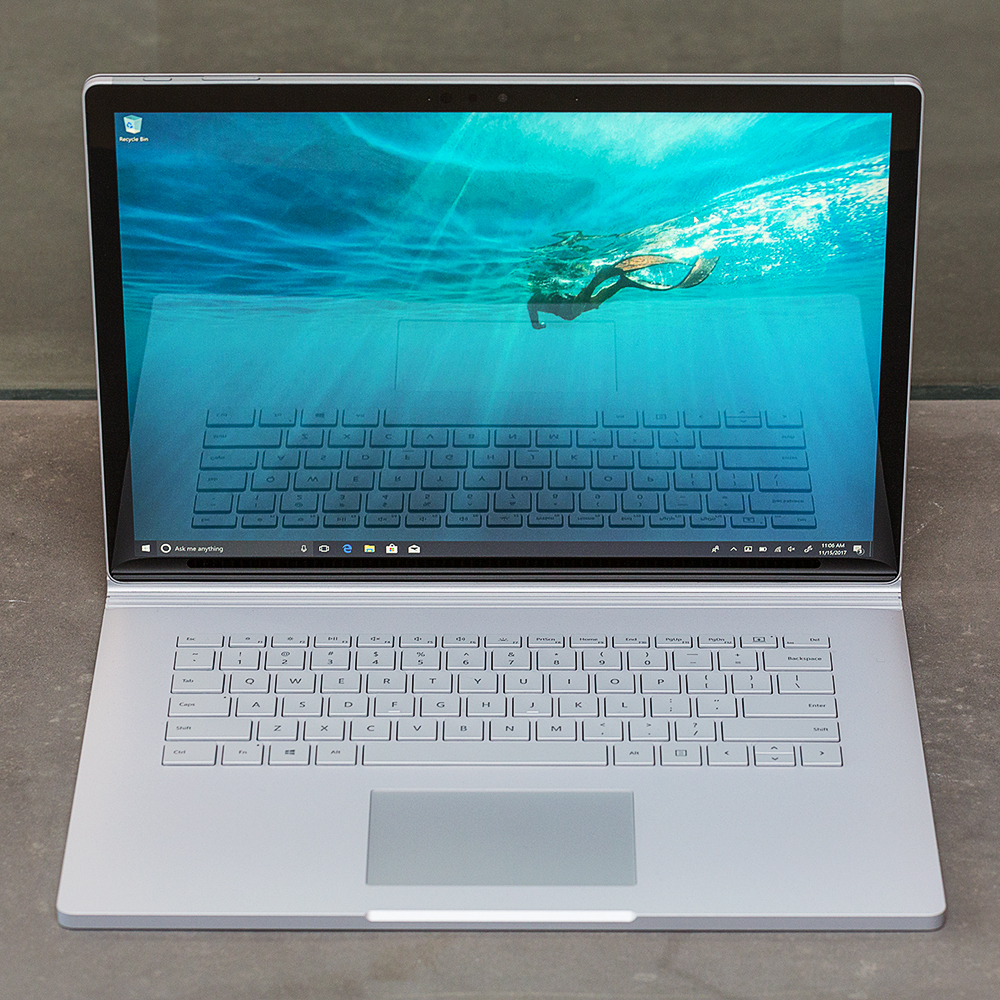