Share All sharing options for: The REDS EV prototype is designed to help you relax in a traffic jam

It’s not a self-driving car, but its a car designed for the times when its not being driven. REDS is the alpha prototype for a new Chinese city car conceived by the provocative former BMW design chief Chris Bangle, whom The New York Times car design critic Phil Patton once described as among the most widely known and discussed automobile designers. The Verge had an exclusive look at REDS before its reveal at the Art Center College of Design, in Pasadena, California on the eve of the 2017 Los Angeles Auto Show. The car will be produced by REDSPACE, a new Chinese car company formed by the China Hi-Tech Group Corporation, a commercial manufacturer. It joins a growing number of carmakers launching in the burgeoning Chinese EV market, but that’s where the comparisons to other companies end.

REDS looks like nothing currently on the road. It has a boxy, cartoonish shape Bangle likens to Calvin & Hobbes. The windshield angles upward at an inverse proportion, wings jut out from its sides in the front section of the car and taper off on the rear, and a flat solar-paneled roof forms the shape of a lid. Inside, it resembles a compact apartment living room more than a typical car interior. The characters that inspired the visual language of REDS are straight from the children’s literary canon, a book that Bangle once read to his son and referenced throughout the design process: Richard Scarry’s Cars and Trucks and Things That Go. “When little kids draw cars, this is what they draw,” says Bangle in an interview with The Verge.

Beyond its looks, the guiding premise is what it does. “How one uses the space became the actual driving motif for the vehicle,” Bangle says. Bangle and his team focused on what happens in the car in the time it isn’t being driven, which on average is about 90 percent, he says. “We call it the 90/10 philosophy, meaning we prioritize the 90 percent of a car’s usage when it is not moving rather than the 10 percent when it is.” The car is not equipped with fully autonomous software. “Is the car self-driving? Right now, it is not, but if you think about what kind of cars we might want to have when they do become self-driving, probably this 90/10 philosophy is not a bad one to follow.”

“When little kids draw cars this is what they draw”

For the immediate future, when plans for REDS move into production, it’s designed to address the challenges drivers face in congested Chinese cities.

“In the megacities in China, we learned that traffic is at a standstill there an awful lot,” Bangle says. “We found out that particularly young people don't have the same availability of private space to themselves that you might expect in other places.” Grappling with the concept in Chinese culture referred to as the “fourth space,” they began to think how the car could be used. “There has emerged this idea in China of a ‘fourth space.’ They say that there is the one space that is your home, the one that is your office and then a third space that is often noted as being the social space — like coffee shops. This is what Starbucks is trying to be. It's the space where you meet other people. The fourth space is “your space”, a place you configure for your needs and even share when you want. This is REDS.”

What sets the REDS EV apart are two immediate prospects: its wild amorphous 2.97 meter form, only a bit larger than a Smart car that in motion seats four, or when idle, offers room for five, and the return of Bangle to car design, who oversaw all aspects of development through his Turin, Italy based consultancy.

Bangle, who graduated from the Art Center, has a prominent profile that sets him apart from others in the auto industry. He identifies as an artist and has shown his work in museums. In his 2002 TED Talk, he explained his philosophy that car design is an art form, which he said, “Cars are an avatar of yourself,” and described the design process as a collective journey in trust and creativity, a striking departure from the rigid corporate process favored by big car companies. Bangle, who led BMW’s car design program at the time, occupies a unique identity in the history of automotive design. He was known for taking chances, breaking the mold, and sometimes alienating performance car traditionalists in the process. During an era where many car shapes were banal, Bangle’s team helped infuse discussions about shapes and forms that shook up the industry from the X Coupé concept to the infamous rear haunches on the trunk of 2001 BMW E65 7 Series to the grand slam resurrection of the Mini brand for BMW. Before BMW, he also led the design departments at Fiat and designed for General Motor’s German Opel subsidiary.

Shortly after leaving BMW, he launched Chris Bangle Associates, a design consultancy that opened up new ways to apply his 30 years of experience designing cars to other mediums from super yachts, to Japanese spaceships, to Samsung products.

“When I left BMW, I didn't say I was leaving the car business,” Bangle says, “but I did say I was leaving belonging to an OEM, an original equipment manufacturer, a brand like BMW was. I didn't want to go back into a major brand for many reasons.”

Bangle was no longer interested in designing exterior shapes and forms to stretch the boundaries of a new vehicles prospectus, but longed to turn his attention to solving other design challenges.

Mr. Wang Jinan, Assistant President of CHTC Group, Chairman of CHTC Motor approached Bangle about the project in 2014. “They are a company that deals with industry and industrial vehicles and products, but not necessarily cars,” Bangle says. “They hadn't built cars yet, but they're used to high-end technology. They asked if I would help them create a whole new vehicle for a very particular situation. They were very interested in trying to resolve the megacity problem for people in China, where electric vehicles are really the best alternative and they are the future. They wanted a vehicle which specifically addressed what happens to people in big cities.” When he told Mr. Wang he wanted to call it REDS, Mr. Wang coined the acronym “Revolutionary Electric Dream Space.”

Bangle brought in a former BMW colleague Swantje Rössner, who designed interiors for the BMW 7 Series and the X5 to work with his small team. For the exterior lead, he called on former Mazda advanced designer Atsuhiko Yamada.

The design process started with making a car roughly the size of a Smart ForTwo car, and focused on the prospect of maximizing interior space to accommodate a small group of people and storage. The team imagined how to make small car into a space suited for relaxation, which led to a seat configuration that feels more like parts of a Lego build. The driver’s seat swivels around a folding steering wheel and the passenger seats slide and swap positions to make more legroom, designed to make a city car feel like a home office, entertainment center, or even a nursery. “You don't have to break your neck to crane around and talk to the person next to you,” Bangle says of the seat configuration. “It’s important when you want to deal with your baby on the seat behind you. When you've parked and your child is still asleep and you don't want to wake the baby up. You have a space for yourself to deal with something, read a book, write a paper, work on your computer.”

Bangle says the REDS car is also comfortable — though we have yet to lounge in this work of vehicular Tetris.

“This is the first car I think you can actually say it has a wrap-around rear loveseat.” It also includes a built-in foot massage in the floor and a red carpet that rolls out onto the sidewalk for dramatic effect.

Traffic at a standstill means time for relaxation in REDS, which has a 17-inch screen that can be used for gaming or movies. “When you're normally driving, it sticks up about one third of its height and that's where you see all the information about driving, the navigation and the speed and all that kind of stuff. When the car is stopped, it comes all the way up to its full height,” Bangle says. 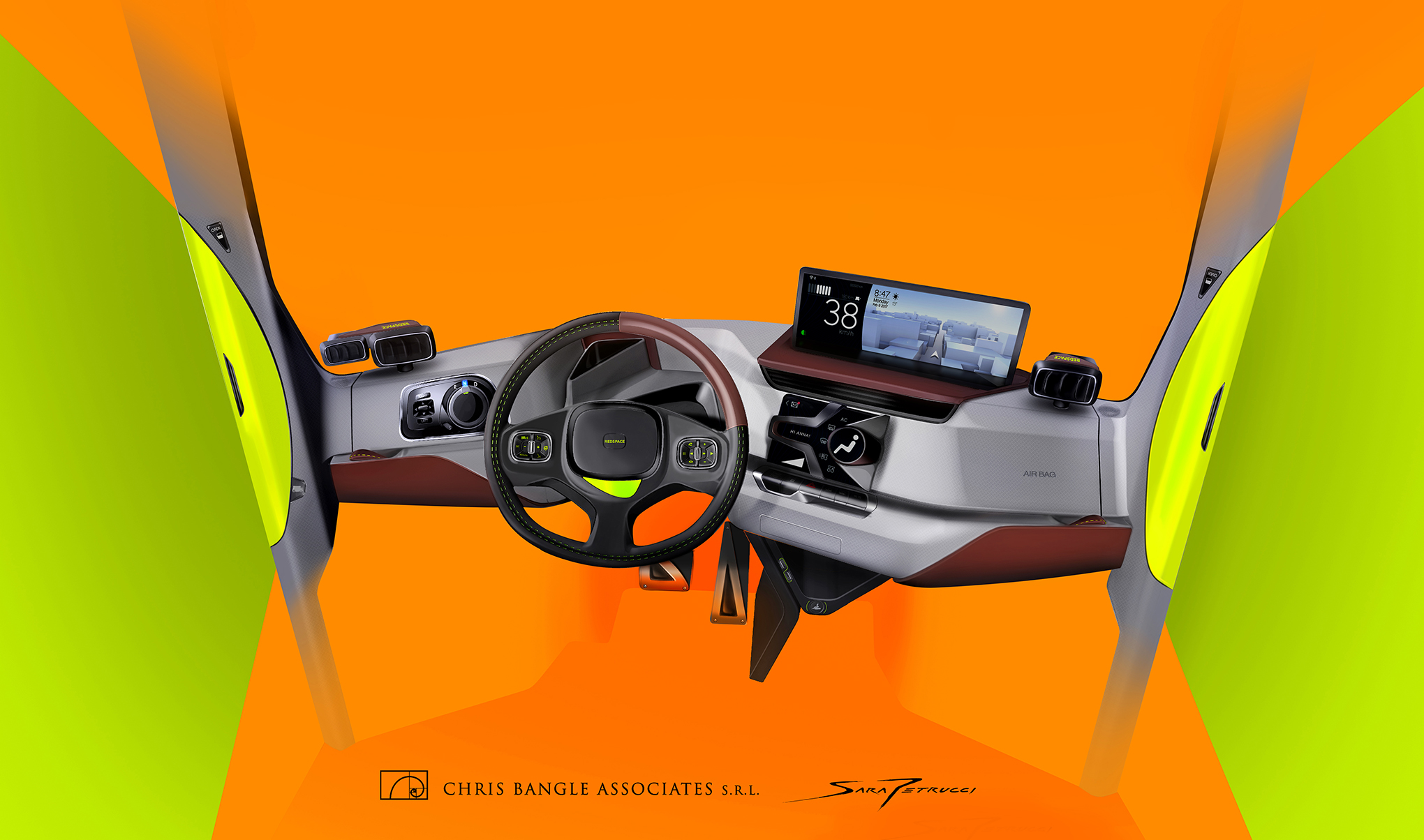 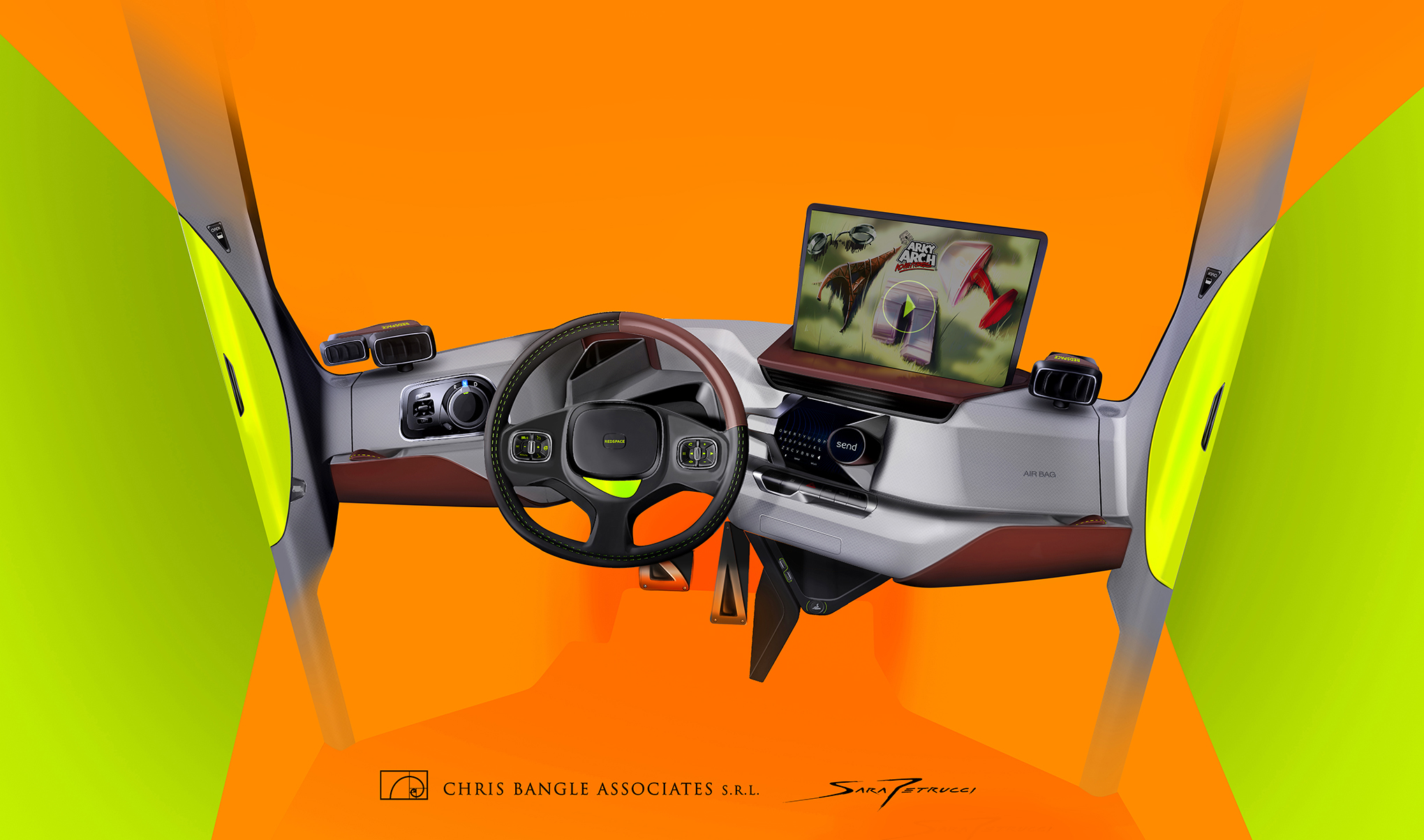 The high sloping windshield is the most eye-catching element of the exterior, which Bangle says minimizes exposure to direct sunlight and keeps the car cool. It also introduces “Cartesian” sliding doors, and a roof that extends to block the rain. REDS is made of aluminum, a lightweight material, which enhances performance. He worked with a team of Italian engineers near his studio. “As far as I can tell from where we are in our performance data, it will not only have excellent range, but it will also have really excellent acceleration.”

Though it looks like a far off concept, Bangle says it’s moving toward production and will be outfitted with contemporary safety systems to make it applicable to current road conditions. “It will have top-of-the-line electronics and safety systems both passive and active that the people today consider proper and necessary for driving a car,” Bangle says.

Bangle has never been one to shy away from being different. Today his once polarizing contributions are now celebrated. Chris Harris described Bangle’s legacy in Jalopnik: “This is why Chris Bangle was right and we were wrong: because his brand revolution now resonates outside the car-world, and that is unusual. Normally the car industry copies ideas from other, more radical corners of the industrial map, but in the paradigm shifts being undertaken by so many famous brands you see the Bangle effect.”

What Bangle and his team grasp is how to create forms that make an impression, and express purpose. Another key element of REDS is its decidedly cute appearance — and that’s intentional, too. Bangle’s process is reflected in this proposition that is three years in the making. “The experience that we have in the car business is that if you present people with just an unusual shape, it takes them a while to get a hold of it. This is not always a good selling argument. There has to be another compelling reason of, 'I want to have this car.' The best reason to want something in the car business is because of its character.”

Harkening back to Richard Scarry’s worldview of the automobile is to tempt the beholder with an expression of childlike whimsy, and create a sense of openness to change. In China, where EVs are primed to transform the landscape, REDS is making a scene-stealing entrance.

This Week in Elon