Here’s a question to ponder: when buying noise-cancelling (NC) headphones, should you choose the pair that sounds best or the one that’s best at neutralizing noise? The answer used to be obvious in the pre-2016 era of Bose domination: you just bought the latest QuietComfort pair, knowing that its noise cancelling was unmatched, and accepted whatever mediocre sound it gave you. But then Sony changed everything with its 1000X last year, giving you both the quiet and the comfort of Bose plus a kicking bassline.

The past year has turned noise-cancelling headphones from purely functional tools to help you survive a long flight or a tiring shift at the office into truly enjoyable music stations. Among my favorites have been the on-ear AKG N60 NC and the over-ear Bowers & Wilkins PX, both of which have elevated sound quality expectations from the wireless NC category. So now Sony’s second iteration of the 1000X, the $299.99 1000XM2, have to outdo not only Bose and Sony’s awesome first try but also a number of sweet-sounding alternatives from a suddenly highly competitive field.

When presented with a pair of the 1000XM2s, you’d struggle to identify the physical differences from the original 1000Xs. Sony really nailed the essential design with its first generation of these wireless cans, and so the reprise is almost total. The exceedingly comfortable pads and headband are back, and the whole thing still folds down into a compact shape and into a semi-rigid case. As far as long-wearing comfort and portability were concerned, there was nothing for Sony to fix here, and so it’s no surprise that the company is keeping what works.

One structural complaint that has arisen since my review of the 1000X — and has given rise to an 8-page thread on Sony’s support forums — is the headband of these headphones cracking easily. Since the design appears unchanged, it’s reasonable to extend that worry about durability to the present 1000XM2s as well, however it appears that Sony has narrowed down the problematic headbands to a particular batch of 1000X units. In all my testing with both models of 1000X cans, I’ve never come close to even hearing a creak from them, let alone finding a crack. I’m willing to trust in Sony’s engineers and warranty process here, and I don’t consider this potential issue a big risk to take.

The 1000XM2s are simply sumptuous to wear

Maybe if I hadn’t spent as much time as I have with the 1000X and their successors, I’d be less certain in my trust, but both pairs of these headphones have proven indispensable in my daily life. Got a meeting to commute to? I grab the Sonys on my way out. Need to keep warm while waiting for the bus in winter? I don’t have earmuffs, so Sonys it is. Unlike the Bowers & Wilkins PX, whose sound I am in deep and passionate love with, these Sony headphones never cause me any discomfort. Set aside the convenience of them being wireless or the utterly excellent noise cancelling, the 1000XM2s are simply sumptuous to wear.

On a recent trip to Madrid, I went a full five hours before I even had to adjust the M2s on my head. That’s all the way from my front door, through the London underground, past the security check at Heathrow (where I had to remove them briefly), up in the air and down again, and out into the Spanish sunlight. Any pair of headphones that effortless and unnoticeable to wear for that long is worth its weight in gold.

A big part of what’s supposed to distinguish the 1000XM2s from their predecessor is the audio self-adjustment that Sony has built into the new cans. This now includes “atmospheric pressure optimizing” that apparently adjusts to your altitude. Did I feel anything particularly special or noteworthy with this setting turned on during my flight? Nope. If you use Sony’s companion app, you can also activate Adaptive Sound Control, which is supposed to detect whether you’re walking, sitting, or traveling and tweak the NC accordingly. I found it a fiddly and inconsistent system, and since it reduces NC while you walk, which I don’t actually want, I left it off. It’s worth reiterating here that Sony’s noise cancelling tech is only rivaled by that of Bose: it really is a category leader, and many people consider both Sony and Bose’s NC to sometimes be too much. I’d just prefer to be able to toggle that manually rather than relying on an imperfect system.

My feeling about the automated tweaks that Sony is introducing with the M2s is similar to how I feel about the B&W PX and the way they automatically stop playing music when I take the headphones off. Both are good ideas in abstract, and would be desirable if they worked with reliable consistency, but both annoy me more than they help because of the false positives when they do something I don’t want them to.

Sony’s touch controls on the right ear cup of the 1000XM2s are unchanged from the 1000X — which means my dissatisfaction with them remains as it was. I can make them work, but it requires more labor and precision than it should. A swipe up or down adjusts the volume, a swipe forward or back switches between tracks, and a double tap in the middle toggles playback.

More than once, my double taps weren’t registered and the M2s kept playing when I wanted them to stop. What’s wrong with having a real, physical button that lets me control that? Sony already has buttons on the left cup for power and noise cancelling, and a hard “play” button wouldn’t have broken any part of the design. It’s equally annoying when I find myself getting into a song and trying to turn it up, only to have the headphones register my swipe as forward rather than up and thus skipping ahead.

Last year, I celebrated the 1000X for being that rare pair of Bluetooth NC headphones that sounded great. This year, I think the 1000XM2s might sound just a tiny bit better, but I can’t be as forgiving in my judgment of their sound. Not after the Bowers & Wilkins PX swept through my life. So how do I feel about Sony’s M2 sound? In a word: conflicted. I don’t mean confused, I mean conflicted.

The M2s are heavily genre-dependent. Put on something rich on low notes and distortion, such as deadmau5’s W:/2016ALBUM/ and you’ll be rocking out to the deep, murderous, satisfying bass. But here’s the thing about deadmau5: his music doesn’t sound bad on any audio equipment, it welcomes and positively embraces distortion and imprecision. Blurryface by Twenty One Pilots is another album that pops and throbs in a satisfying fashion through the 1000XM2s, and I admit I enjoy the extra quantity of bass that these headphones deliver. But once I tread to more refined musical genres like classical or jazz, the muddy nature of the M2s’ low end is revealed and it’s not pretty.

Female vocals are an especially disappointing aspect of the M2s’ sound. I’ve recently gotten into listening to more from the likes of Kelela, Banks, Halsey, Willow, and Lorde, and the subtle emotive power of their voices is all but wiped out by the 1000XM2s. Where the Bowers & Wilkins PX would make me want to dance in the streets with its perfectly balanced highs and lows, Sony leans too heavily toward the low end, deadening the exact frequencies that make the PX feel alive and exciting.

Battery life is once again great, though the MicroUSB charging port should have been upgraded by now

Where Sony trumps Bowers & Wilkins, other than the more comfy design, is in having NFC-based pairing, which is simpler and easier than the usual Bluetooth malarkey. Both companies tout battery life numbers beyond 20 hours when the headphones are used wirelessly and with NC on. In my experience, the Sonys seemed to last a little bit longer, but it’s not enough for me to identify it as a meaningful advantage. Both the M2 and the PX last through a week of regular listening for me, which is plenty. I’d have liked to see Sony match B&W in having a USB-C charging port, but the M2s have to make do with the old MicroUSB connection — fine for most, but terrible for my “USB-C all the things” personal philosophy.

By now, you should be able to understand why I feel so torn. The 1000XM2s are some of the most comfortable headphones I’ve tested (and I’ve tested hundreds); they last a long time; they deliver solid wireless performance; and they outperform almost everything else out on the market. But I’ve heard the B&W PX, and I no longer love Sony’s sound the way I did when I reviewed the original 1000X. Hell, I don’t even find there’s much difference between the M2 and the first-gen headphones.

The key difference maker for me is the $299.99 price of the 1000XM2s. That’s at least $30 south of the Bose QuietComfort 35s — and I’m confident both 1000X models from Sony offer superior sound and performance than Bose — and a full $100 cheaper than the Bowers & Wilkins PX. If you’re budget-constrained or just can’t find a good fit with the PX, I’d immediately point you to Sony’s 1000X range. But which one of the two? The original 1000X is now $229.99 direct from Sony, and on the evidence of my review of the 1000XM2, I can’t say you’ll be missing out on much going for the older one. In any case, it’s safe to say that, for most people, either one of Sony’s 1000X variants is still the best set of wireless NC headphones available. 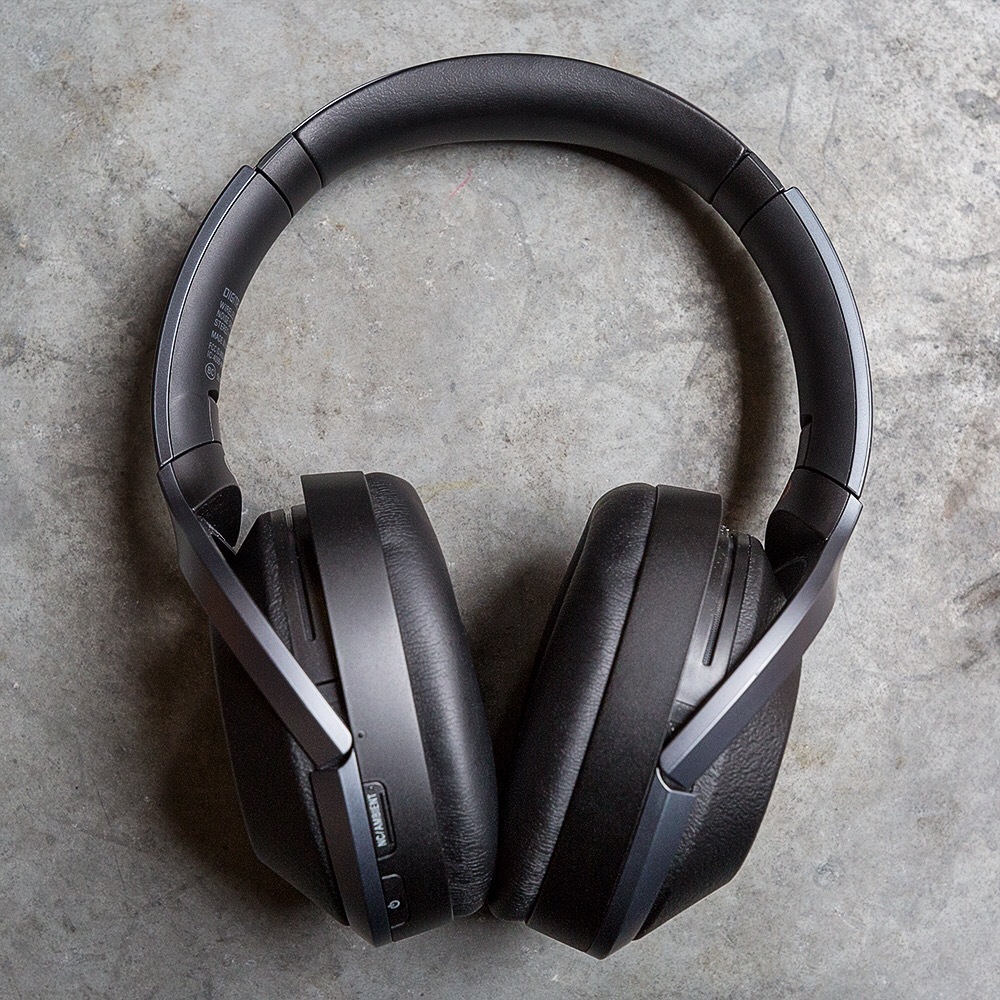