For the past couple of weeks, I've been wearing a Fossil Q Activist, a good-looking $155 watch that has let me track my steps and know when I get a notification. I haven’t had to charge it a single time.

The Q Activist, like several other devices in Fossil's Q lineup, is a so-called "hybrid" watch, something that’s not a full-on “smartwatch,” but does more than the typical analog timepiece. It's just barely larger than a regular watch and has no LCD display, instead conveying information the way watches have for hundreds of years: by pointing mechanical arms at numbers.

There have been a lot of attempts at creating a smartwatch like this over the years, but I always found them to combine the worst of both worlds: they lacked the simplicity of a plain old watch and the functionality of a full-blown smartwatch.

But Fossil's latest generation of Q hybrid watches are different. Instead of giving you the worst parts of both devices, it delivers most of the best from each.

Here is what the Q Activist is good at: being a watch. It is good at telling you the time, all the time, no matter what. There's no screen to lift and turn on. Its battery lasts six months or more before you have to replace it. It lets you take it for granted like you do with any normal wristwatch.

Really, as a watch, my main complaint is that there is no way to see it in the dark. Presumably to save battery life, you can't push a button to light it up. I wish that Fossil had at least put some glow-in-the-dark paint on the watch hands, but it's fine.

The Q line comes in over 40 different styles that combine different watch bodies, watchface layouts, and bands. There are models that are appropriate for people who prefer both men's styling and women's, and most of them are not especially large. The model I chose is okay, but it's not great at showing you the date; you have to push a button and the minute hand points to a tiny little number around the edge of the watchface that's almost too small for human eyes.

These are Fossil watches, which means they have that "I'm cooler than The Gap but not that much cooler I mean let's be reasonable about my level of carefully proscribed suburban rebellion as a teenager and besides I'm a totally responsible millennial adult now" aesthetic. It doesn't quite feel super premium, but it's not super cheap. I certainly would never pay $155 for this if it weren't a smartwatch. Anyway, nobody has asked me about this watch since I started wearing it. It looks fine.

Each watch comes with a band, but they're all standard sizes with standard quick-release pins, so it's easy to replace them with something you like better.

Now, as a smartwatch, I am surprised by how much you can get done with just a couple of watch hands. It tracks steps, monitors sleep, allows you to control your music, see your commute time, and, of course, get your notifications. Really the main thing I miss is that there isn't some kind of option for weather.

For notifications, you can set people or apps to any of the 12 numbers around the dial. So while you won't get the contents of a Facebook Messenger ping, you'll at least know that the thing vibrating is Facebook Messenger and not, say, a tweet.

I've found it to be useful. If I'm in a place where I can't pull out my phone, I can at least get a quick check of what came in without interrupting a conversation. Here's how I've set up my notifications:

Fitness tracking is pretty basic: it's just steps and sleep tracking, really. There's no heart rate sensor and no way to set up an exercise session. For me, a lazy person, it's enough. You can connect your fitness data to a few other apps (Jawbone, Under Armor, Apple HealthKit, and Google Fit).

Last but not least, you can set different functions to the three buttons on the watch. These can be set to show the date, your steps, different time zones, music controls, and a few other things. One I like is a "Goal Tracking" option, which in theory is supposed to be for checking how many glasses of whatever you've drank (or whatever). I use it to track how many nicotine lozenges I'm using a day, because I quit vaping (which is off-brand for Fossil, but give me a break).

Fossil’s app, which I've used on Android but not yet on iOS, has a bunch of configuration options for various features. It does seem to be a little more interested in showing you photos of Kristen Bell wearing Fossil watches (shout out to The Good Place) than my fitness data, but you can basically get to where you want with some tapping around. There was a hiccup after a recent redesign that caused the app to chew through my phone's battery, but Fossil fixed it within just a day.

The Fossil Q hybrid watches work on both iOS and Android. I like having a smartwatch, but I've found that I deeply dislike all of the many, many Android Wear options that I've tried recently. The platform itself is half-baked, and a lot of the watches are either overpriced or underpowered — or just plain ugly. As an Android user, I think these hybrid watches are a pretty good option.

For iPhone users, the calculus is a little different. The latest Apple Watches are super great (so long as you skip the LTE versions), but they are also significantly more expensive than these Q hybrids.

There are times when I wish this Q Activist watch could do a little more, but mostly I've grown accustomed to not worrying about it. I appreciate the extra information and features it gives me over a standard watch.

I also can't express how great it is to have a watch that does that extra stuff that I never have to charge. I didn't realize how much I resented plugging in my watch every night, but I totally did. It also means it can actually track my sleep, something that's just a pain to do with a more power-hungry watch.

Our boss Nilay Patel likes to point out that too much technology these days asks us to change our habits to fit the tech, to make us think about it too much. I don't think about this Fossil Q hybrid watch.

Our review of Fossil Q Activist 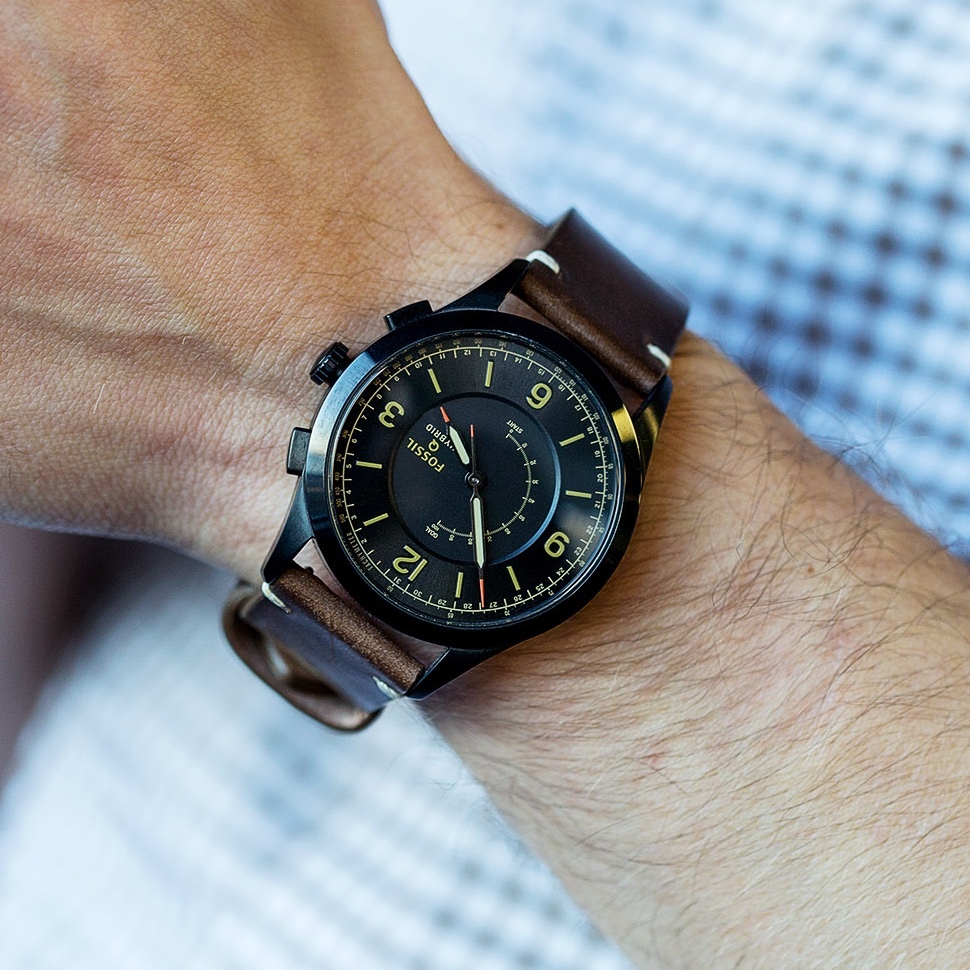