To get a better TV, you’d have to spend much more money

Share All sharing options for: Vizio M-Series (2017) review: the foolproof choice for great 4K and HDR

Vizio’s 2017 M-Series is an excellent choice if you’re in the market for a 4K HDR TV, need something 65 inches or bigger, and want to get the most value for your dollar. If you’d be satisfied with a 55-inch set, I’d still push you toward the superb TCL P-Series, but at larger sizes, there’s no beating this value. The 65-inch Vizio can be had for just $1,000 and it delivers top-tier picture quality and supports both popular forms of HDR (high dynamic range) video: Dolby Vision and HDR10. It doesn’t get as blazingly bright as sets that cost far more money, but you’ll absolutely notice and appreciate the difference HDR makes.

Like last year’s TVs from the company, the M-Series still uses Google Chromecast as its software foundation, letting you send content from the apps on your smartphone to the big 4K screen. But this isn’t just a “dumb” 4K screen with Chromecast anymore. Vizio has reversed course somewhat by getting rid of the bundled Android tablet that came with its 2016 models and putting some critical apps — Netflix and Amazon included — back on the TV itself. Some might see that as a regression, but it’s a lot simpler for the vast majority of people to understand. It’s the right move, although I wish Vizio’s execution had been better.

The M-Series has never been much of a looker, and the 2017 version sticks to that tradition. There’s textured metal trim running down the left and right sides to give the TV some resemblance to Vizio’s flagship P-Series. But the overall downgrade in quality of outer materials (the P-Series has a metal frame) is rather apparent — not that it matters when you’re watching the thing. Since the tablet is gone, Vizio has included a larger remote that includes shortcut buttons for Netflix, Amazon, Vudu, and other services that really don’t deserve dedicated space like iHeartRadio, Crackle, and Xumo. As is always the case, I wish these companies would just let you customize a selection of color-coded buttons and call it a day. Never in my life will I push that Xumo button, Vizio. Sound quality from the integrated speakers isn’t abysmal, but it’s muddy and dull. You can greatly improve the audio experience with a cheap soundbar, and Vizio actually makes some of the best, bare-bones options you can get.

Continuing the change that Vizio made last year, the M-Series lacks any built-in TV tuner, so you’ll need extra hardware to watch over-the-air channels with an antenna. Vizio includes 4 HDMI ports for connecting your streaming devices, cable boxes, gaming consoles, and so on. All are HDCP 2.2-compliant, but only one of them — HDMI 1 — qualifies as HDMI 2.0, meaning it can play the best possible 4K HDR picture at full quality with no issues. The other HDMI inputs shouldn’t have any problem handling a 4K signal, but HDR will likely be a no-go. So, you’ll definitely want your most important device running into that first one. It’s disappointing that not all of the ports meet the HDMI 2.0 spec, which is something you can find in other TVs even at this price range. That would have avoided the hassle of customers having to make choices about what gets plugged in where or switching things in and out of that HDMI 1 input. And for some devices, like the Xbox One X, you’ll have to make sure the right settings (like “Full UHD color”) are enabled to unlock the full visual experience.

And that viewing experience is far beyond what the Vizio’s affordable price might have you expecting. The 2017 M-Series uses full-array local dimming to brighten and dim different areas of the panel as necessary to achieve the best contrast for what’s on-screen. There are 32 zones no matter what size of the M-Series you choose, which is fewer than Vizio’s P-Series (over 100) and the TCL (72). More zones are better, but I was still totally satisfied by what I saw from the M-Series. My unit exhibited good uniformity across the screen, and got plenty bright when watching HDR movies like Wonder Woman and Planet Earth II. Gaming on this TV is also a delight. It doesn’t offer best-in-class input lag, but I didn’t perceive any noticeable delay during sessions of Battlefield 1, and the image quality with titles like Horizon: Zero Dawn can be dazzling.

Viewing angles are a weakness, though, as the picture quickly gets less punchy and blacks turn to gray when watching off-center. (That’s a typical trait of VA-type panels like the one Vizio uses in this TV.) Also, the M-Series offers no motion interpolation options whatsoever, so even if you’re a heathen who prefers the soap opera effect, there’s no way of enabling it at all. I say hallelujah, but sports fans might miss it.

Utilizing the TV’s Chromecast feature with apps on my smartphone worked reliably and consistently. Moving something from your smartphone screen to the giant 4K TV is as simple as hitting the Cast button in supported apps. There are thousands of them at this point, with most of the heavy hitters covered. (Amazon Prime Video and Apple iTunes are the major holdouts at this point.) But instead of basing the entire interface around Chromecast, Vizio has sensibly brought back a more traditional on-screen menu for people who don’t want to use their phone as a remote control or content source. You’ll also find a handful of streaming apps here, and Vizio says they theoretically shouldn’t lag in updates or new features since they’re cloud-based and updated by the companies themselves.

But all is not perfect. Any TV with built-in apps should absolutely have the five essentials covered: Netflix, Amazon Video, HBO, Hulu, and YouTube. Vizio only manages to check off three of them; you’ll have to open HBO and YouTube on your phone to run them on the TV. That’s unfortunate, and Vizio’s half-baked approach can actually trigger a feeling of frustration when you have to turn to Chromecast — one of the set’s best features — to watch something. Instead of “oh cool, I can stream pretty much anything to this TV,” it’s “ugh, I just want to watch some Hulu. Where’s my phone?” Ideally, the company would have included several more popular streaming apps in addition to the Chromecast side of things. As it stands now, there’s an annoying split.

It doesn’t help matters that the home screen is laggy and just incredibly basic. The top half seems to highlight a completely random and aimless mix of content, with the limited app menu filling in the bottom. It lacks the helpful universal search that you get from TVs running Roku’s software, Fire OS, or Android TV. Your favorite streaming box can probably take care of that, but it would’ve been nice to see Vizio present something that feels less cobbled together in its return to a more traditional smart TV interface. The experience is rough, but between set-top boxes and the Chromecast integration, hopefully you’ll rarely have to deal with it.

But thanks to Google Assistant, you do get some nice, convenient voice control features on the M-Series. You can tell a nearby Google Home to start playing something from Netflix, HBO Now, YouTube, or YouTube TV, and it’ll begin streaming on the TV in seconds. Aside from launching content, you can also control playback (“pause,” “rewind 30 seconds,” etc.) with voice. You can get the same end result with a Chromecast plugged into any television, but having it built-in here is excellent and will prove more useful as the list of supported services grows.

The 2017 M-Series from Vizio is an excellent choice if you want a TV that outperforms basically all of the competition in this price range and many sets that cost a few hundred dollars more. You’ll be satisfied with the picture it offers — especially if this is your introduction to HDR — and can be comfortable with your purchase since it’s pretty well future-proofed. Again, if 55-inches is the sweet spot you’re looking for, I’d still recommend the TCL P-Series and its outstanding Roku software. But unless you’re willing to spend significantly more for an LG OLED or the best-of-the-best LCD models, you’ll want to take a close look at this one. 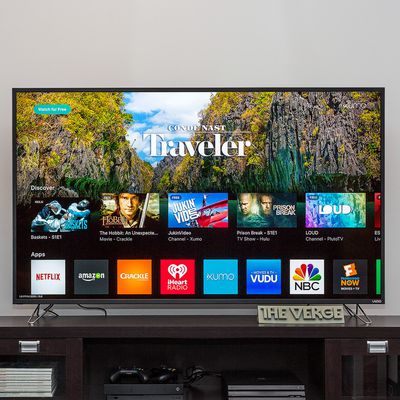