Share All sharing options for: Canon M5 review: the best mirrorless camera of four years ago

It's something of a running joke in the photography world that Canon and Nikon, the two biggest camera companies in the world, have missed the boat on the interchangeable lens mirrorless camera trend. Over the past few years competitors like Sony and Fujifilm have pumped out increasingly fantastic cameras that ditch mirrors in favor of (mostly) digital viewfinders, allowing them to make SLR-style cameras that are smaller and lighter.Canon and Nikon have made a few mirrorless cameras, but they’re meager. They’ve lacked the vast functionality found on Sony’s A7 line, and offer none of the design flare that Fujifilm is so good at with its X series cameras.

That’s why things seemed to be looking up when Canon announced the $979 EOS M5 in late 2016. For the first time the company made a mirrorless camera that wasn’t just a formless rectangle. It had knobs and dials! It looked kind of like an old film SLR! For those who had been waiting for Canon to play this card, it was an exciting moment.

I’ve spent a little more than a month using the M5 as my main camera, and there’s no doubt that it produces the kind of excellent images you’d expect from a Canon. The quality is on par with the company’s other APS-C sensor cameras — an unsurprising trait considering it borrows almost all its technical guts from the 80D DSLR.

But the M5’s sluggish performance and lower quality build should be red flags for potential buyers. And those faults also represent just how much ground the company has to make up in order to erase the competition’s head start.

Mirrors have played an important role in photography for as long as cameras have been around. They take the light that a lens sees and reflects it up to the eyepiece, giving the photographer an accurate and immediate view of the scene in front of her. This is where the term SLR, or "single lens reflex," comes from.

That immediacy is so key to photographers that the mirror made the jump to digital cameras, too — hence "DSLR." But this has started to change over the last few years, because electronic viewfinders, or EVFs, can give the user a live view from the image sensor. They’ve quickly become high-resolution and high frame rate, making them decent substitutes for the real thing while offering digital information overlays that aren’t possible otherwise. And if you can remove the mirror, you can change things like the minimum size and weight of the camera.

The M5’s EVF is fine — the refresh rate is good enough that motion looks smooth and realistic — but the 2.36 million dot screen doesn’t look quite as fantastic as the ones you find on Sony and Fujifilm cameras. This is one of the first times Canon has built an EVF into one of its cameras, and it shows. (Users had to buy and attach external EVFs on most previous mirrorless cameras.)

The M5's small stature is remarkable, but it comes at a price

Another benefit of mirrorless cameras is size and weight reduction, and this certainly applies to the M5. It is about half the weight and size of the 80D, and yet the layout of the buttons and dials isn’t so cramped that the camera is hard to use. I almost always accidentally hit buttons when shooting with the similarly small Fujifilm X-T10, but Canon got the compact placement just right.

As someone who’s literally spent years of his life lugging around Canon DSLR bodies, I appreciate the M5’s small stature. But Canon clearly made compromises to make the M5 so compact. For one thing, the SD card slot is stuck behind the battery door, which means it's less accessible and gets blocked outright if you put the camera on a tripod. The touchscreen also lacks full articulation — it only flips out and down, not around to the side like on the 80D. The spot where a hinge could go is occupied by the microphone and video out inputs. While those are nice additions for videographers, vloggers should know that this means you can’t see the flipped-down screen if you have a tripod attached.

What I take real issue with, though, is the build quality of the M5. The M5 is not weather resistant, and it also just generally feels cheap to the touch. Canon mixed a few metal parts with a lot of plastic, and the result is a camera that is drastically outclassed by cameras made completely out of magnesium alloy and other metals.

The M5’s cheap build would almost be forgivable if it weren’t for the fact that, when the shutter fires, the entire camera body rattles. There’s no way around this, either — for whatever reason there is no electronic shutter mode, a feature that most other mirrorless cameras offer. That means no silent shooting, and none of the special high-speed modes that electronic shutters make possible on other cameras.

It’s a shame, because the M5 is so small and light that it should be a really inconspicuous camera. But it’s only modest until you press the shutter button, because after that there’s no mistaking that you’re taking pictures. The M5 is like a loud friend that you have to make excuses for — in some situations, you’ll be better off bringing someone else to the party.

Canon’s slow embrace of mirrorless cameras is also recognizable in how sluggish the M5 can be. It shoots relatively fast — 7 frames per second with continuous autofocus, and 9 without — but the EVF is slow to respond to the presence or absence of your eye. Image playback is also slow, which leads to a lot of mistaken button tapping and waiting around. The M5 is full of frustration for people who like to pull back from a viewfinder a lot to review their images on the fly.

A loud and sluggish camera is inexcusable in 2017

The M5’s autofocus is fast enough for most situations, though it doesn’t perform as well as it does on the 80D. The continuous autofocus (and the object tracking) can be easily fooled if an object is running directly toward you. Canon has included the option to drag your thumb across the touchscreen to move the AF point, which is a nice substitute for not having an AF joystick. (You can even customize the active area for this, a necessary but welcome option considering my nose kept moving the autofocus point at first.) But it’s not precise enough for fast-paced action. If you’re using the M5 to shoot lots of motion or rapidly changing scenes, you’re probably going to struggle.

The M5 is not as fast as most photographers would expect their main camera to be, or as well built. At just under $1,000, this leaves the M5 in an awkward spot. It’s a little too expensive to be a forgivably underpowered starter camera, but it’s lacking the features and finish of something more premium.

If you can get past these issues, or if they aren’t your main concerns, you’ll be rewarded. Because the M5 still produces wonderful images. It handles low-light scenes with relative ease — though in-body optical image stabilization would be a welcome aid here — and produces usable images at ISO speeds of 6400 and even a touch higher, depending on the scene.

Canon has especially failed at building dedicated lenses for its scant lineup of mirrorless cameras — to date, there are just seven of them — and the 15-45mm 3.5-6.3 kit lens I used was mostly underwhelming. It’s pleasantly surprising at its widest focal length and aperture — at 15mm, the lens is capable of taking some beautiful wide angle photos, and the maximum f3.5 aperture provides just enough separation to create some background blur for close subjects. But images taken beyond that widest point, and especially at the lens' 45mm and f6.3 limits, look a bit foggy and dull.

All sample photos are straight out of the camera with no edits, though some have been converted from RAW to JPEG.

One remedy for this dearth of lens options, according to Canon, is a $200 adapter that lets you use all of the company’s excellent standard lineup of EF and EF-S lenses. It’s a good solution for M5 users who already own or have access to these lenses, because it deepens the well of quality and versatility that you can extract from the camera.

But the adapter solution also has its shortcomings. Sticking a big, heavy, premium L series lens on the adapter means you have to be careful to support the lens and not just the camera body. Every time I had the 85mm f1.2L or the 70-200 f2.8L attached to the M5 — two lenses that retail for about $2,000 each — I feared they would snap the adapter right off the M5.

There’s also a contradiction here: if one of the main reasons for mirrorless cameras is reduced size and weight, and you still need big heavy lenses to get the most out of a mirrorless camera, then what exactly was the point in the first place?

To be fair, this isn’t just Canon’s problem. Sony users have been struggling with this question for a while now as the mirrorless A7 series has risen in popularity. But, with Canon, this conundrum further illuminates how badly the company needs to add to its mirrorless lens lineup.

I am somewhat let down by the M5, if only because its existence begs the question of what might have been had Canon made cameras like this at scale for the last few years. Despite its flaws, Canon got a few things really right with this camera. It’s small and light, and it’s more connected than basically any other Canon camera that came before. It has an abundance of knobs and buttons for photographers who want lots of control, and yet it's easy to pick up and use.

Will the M5 change Canon's focus on DSLR sales? Probably not.

The M5 is saved by Canon’s digital imaging prowess, because once you learn to navigate its faults, you can create really beautiful images with it. And with the M5, Canon has finally laid a decent foundation for developing a more attractive, exciting, and feature-rich mirrorless cameras. Now the question is simply: how fast does Canon want to build?

Our review of Canon EOS M5 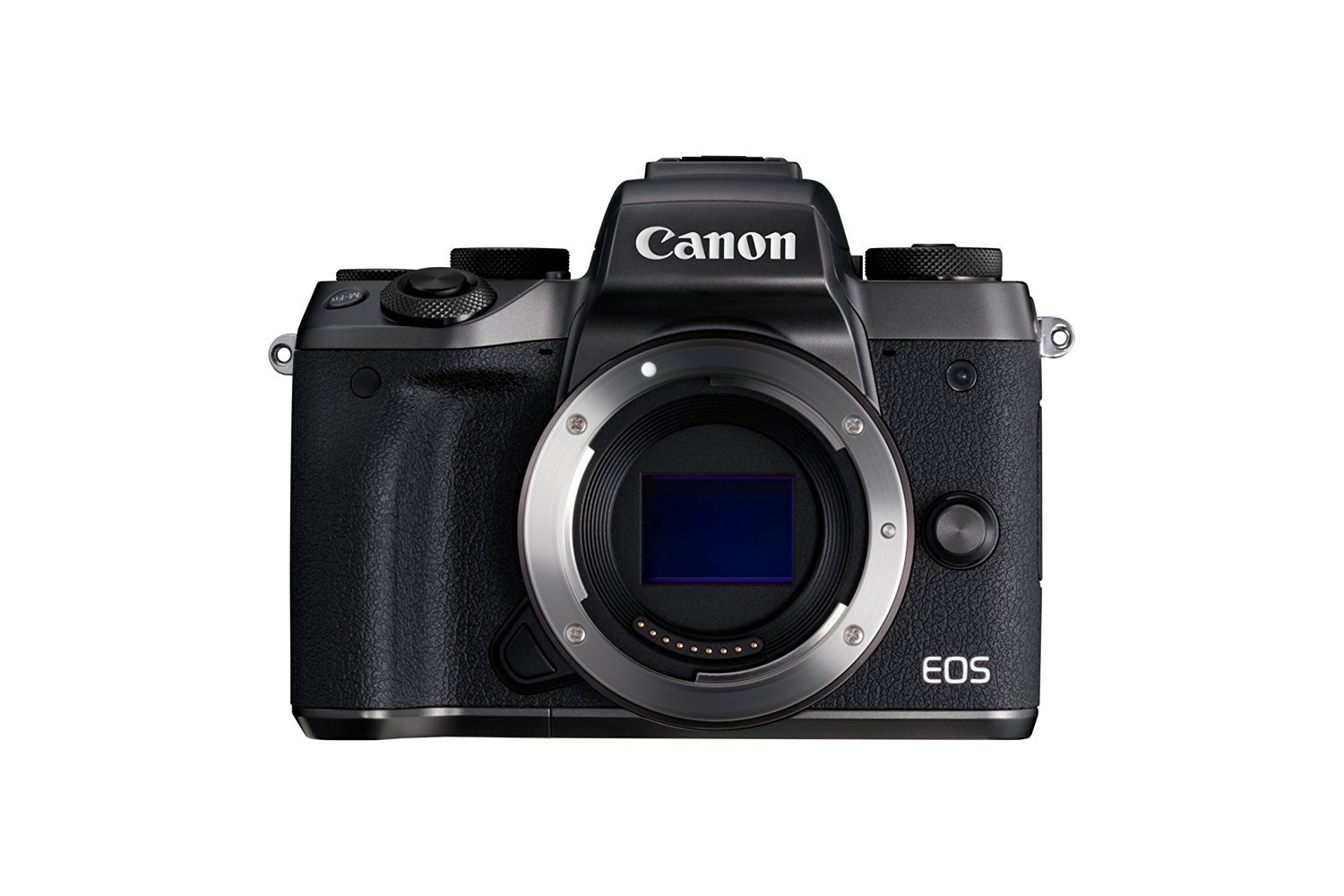