What went down has come back around

Here’s the funny thing about reviewing gadgets: a hundred journalists can spend weeks with a device, say a Samsung Galaxy Note 7 or GoPro’s Karma drone, and not experience anything out of the ordinary. The drone gets flown thousands of times, the phone’s battery is charged and emptied over and over — nothing crazy happens, and you publish your take. The device is released, and a few weeks later, all hell breaks loose.

That was the way things went with my first attempt at reviewing the GoPro Karma. I had this piece written, the photography all set, and a publish date in mind. And then Karma units started falling out of the sky, and GoPro recalled the product. Now, five months later, I’ve got another review unit. Like the first one, it seems to work just fine. Can I say for sure that will be the case for every unit? Definitely not.

The thing is, I don’t need to know that information to explain to you, the consumer, what to make of the Karma.

This is the first drone released by GoPro. When it is functioning perfectly, the following things are still true: the Karma can’t autonomously follow you around. Its battery life is on the low end, and its range is much shorter than its main competitors. It doesn’t have fancy sensors to help it stabilize indoors or avoid obstacles. It’s akin to releasing a flagship smartphone in 2016 that didn’t have a fingerprint sensor or front-facing camera.

So, what does this drone have? The sales pitch from GoPro is a unit that offers a much broader utility than you get with the average drone. It plays to GoPro’s heritage by imaging the Karma as one piece of a complete toolkit for capturing your outdoor adventures. You get a drone for your aerial imaging needs, but you can detach the gimbal and transform it into a handheld stabilizer that works with GoPro’s family of backpack, bike, and helmet mounts. And since the drone works with the Hero 4 or 5 camera, you can use just the camera for filming while in, or even under, the water.

What you think about the Karma really comes down to what side of the divide you sit on. If you’re a mountain biker or avid surfer already using GoPro’s latest cameras and thinking about getting into drones for the first time, the Karma offers an intriguing value. If you are buying a drone primarily to get amazing aerial imagery or looking to upgrade from a drone you bought in the last couple years, the Karma can’t keep up with the competition. 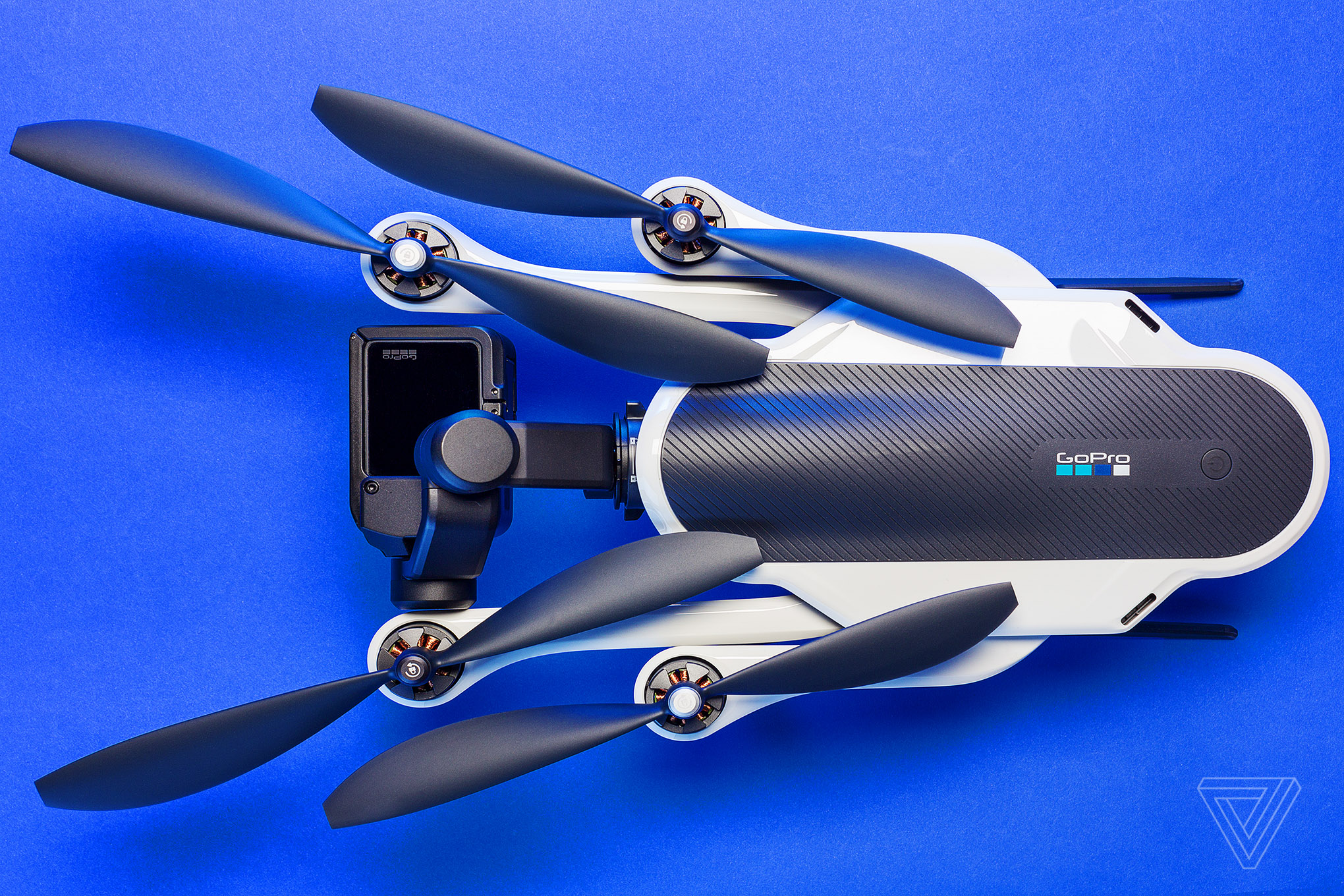 When GoPro announced the Karma, CEO Nick Woodman knelt down onstage for a dramatic reveal, unzipping a thin backpack and lifting out the drone. The Karma’s legs fold onto its belly and its wings fold in to fit snugly against its sides. The camera is positioned on the nose, extending out in front of the body instead of sitting underneath. This makes the Karma long and slim, and at the time you could argue it was the most portable of the serious camera drones on the market.

The Mavic is a real Karma killer

Unfortunately for GoPro, a week later DJI unveiled its latest offering, the Mavic Pro, by far the most compact drone now available. You can put the Karma into your average backpack, but you can slip the Mavic into something as small as a purse, water bottle carrier, even a large pocket. When fully prepped for flight, the Mavic is roughly half the size and less than half the weight of the Karma.

Now the Karma is still more portable than most drones on the market, and that’s nice. Like the Mavic, the Karma slims down by folding up, meaning it has only short legs to separate it from the ground. Less clearance makes takeoff and landing trickier, and you need to avoid grass that would be easy for taller drones to deal with. During my testing, I broke a rotor while landing, something that would not have happened if the Karma’s legs were as long as a DJI Phantom or Yuneec Typhoon.

The Karma remote is about the same size as the controller you get with the DJI Phantom 4, but has a built-in screen that flips up when you open it. The display is really sharp and bright, and makes for a much nicer viewfinder for flying on a sunny day than an iPhone. It strikes a nice balance: smaller than the mammoth remote control that comes with the Yuneec Typhoon H, larger than the DJI Mavic’s tiny remote which lacks a screen for your live video feed.

The footage from the Karma was mixed. To my eyes it looked a bit darker and less detailed than what I got from the Mavic and Typhoon H when shooting at the same location under the same lighting conditions. But it’s going to be different depending on which edition of GoPro’s camera you’re using.

One major issue was the horizon line. Often when I got airborne, after calibrating the unit on the ground, the horizontal alignment would be way off, giving me a horizon that leaned at a 30 degree angle. This is something that happens, and can usually be resolved by calibrating your gimbal. But usually the horizon is off in one, consistent way. With the Karma, the issue seemed to shift, from 20 degrees to the left, back to 15 degree off to the right. Even worse, the Karma doesn’t offer a way to calibrate the gimbal. You’ve got to land, power it off, and restart, giving it a fresh chance to get the horizon line right.

The footage from handheld stabilizer was very nice. GoPro cameras were built to capture footage of athletes who are holding the unit themselves, so it makes sense that it would be better as a handheld unit than an aerial one. There is a slight fisheye quality to the footage, thanks to the Hero camera’s wide angle lens, which helps the GoPro capture moments when you’re filming yourself, but detracts from the look of most big landscape shots you get from the air. 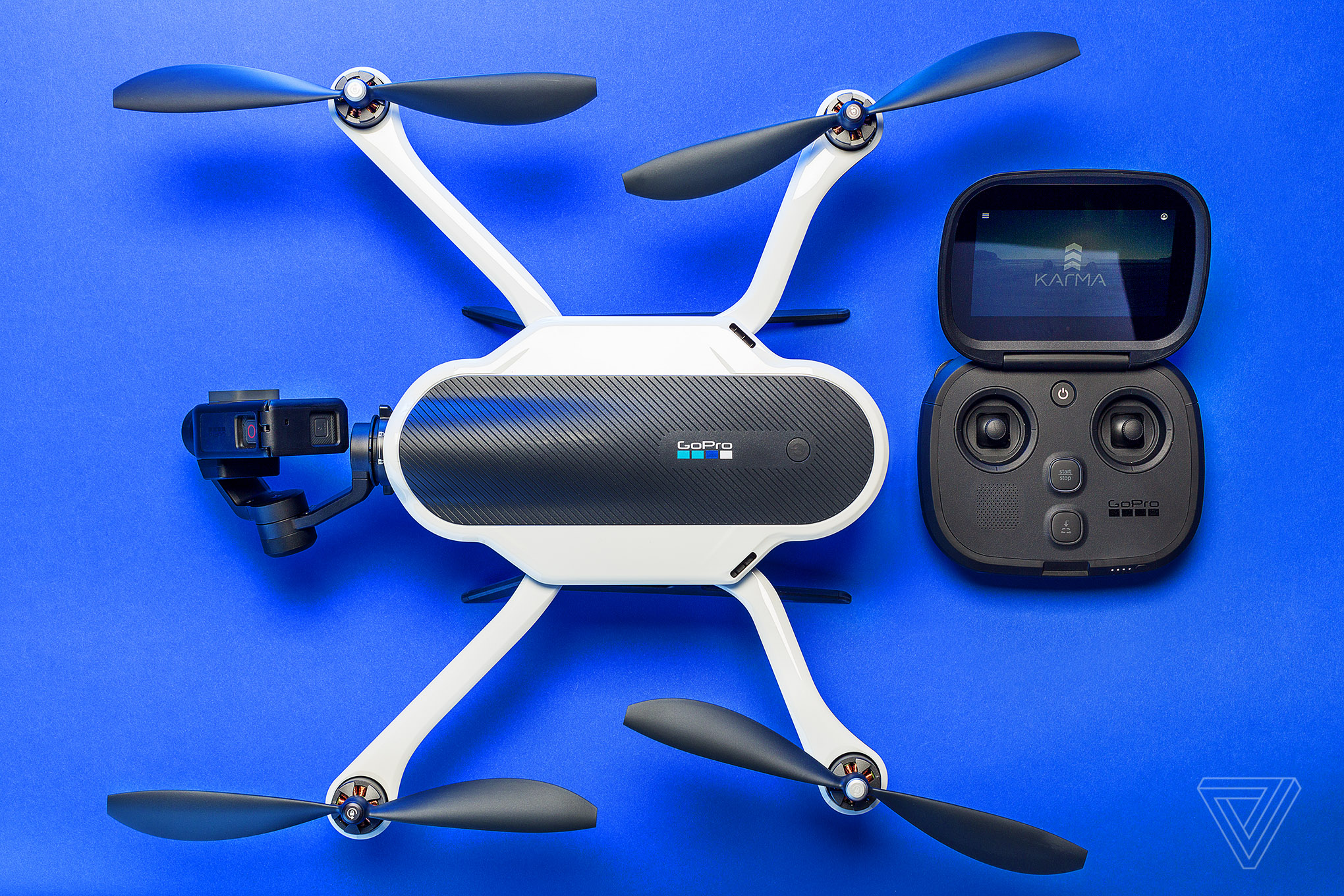 The Karma connects over Wi-Fi, as opposed to the radio signal used by the DJI Mavic. That means it has a far more limited range, promising one kilometer, versus the seven kilometers offered up Mavic. In our testing the video signal was reliable and clear to a couple hundred feet, but after that it would often get choppy or freeze altogether. The drone was also prone to lose connection once it got more than 500 feet away. It would then automatically return to home, which is fine, but a little frightening since Karma doesn’t have sensors to see and avoid obstacles while pulling off this autonomous maneuver.

This isn’t actually a technical problem with the Karma, it’s just the reality of a drone that relies on Wi-Fi. The same thing happens with Parrot's Bebop line of drones, and even with the DJI Mavic if you use it in Wi-Fi mode instead of the radio controller.

You get a few preset camera moves with the Karma: an orbit camera that circles around a point of interest, a dronie that flies away from you, a cable cam panning between two points, and a "reveal," which flies over you while dramatically panning up from the ground to reveal the horizon. This is roughly the feature set of smart shots offered by 3D Robotics' Solo drone, which debuted in April of 2015.

No sensors for tracking or dodging obstacles

Because it lacks the downward-facing sensors you find on drones from DJI and Yuneec, the Karma has a lot more trouble holding its position. If you let it hover five to 10 feet off the ground, it can drift quite a few feet, changing its position and altitude. This isn’t an issue when you’re in motion, capturing a shot, but it does make the Karma harder to pilot, because you need to always be watching it if obstacles or other people are nearby. It also means you can’t fly the Karma indoors, where GPS signals can't reach.

The Karma promises 20 minutes of battery life, but in my testing it never quite delivered on that. Usually by the time I got it in the air, the battery life had fallen to 18 or 19 minutes. More troubling, while the remote gave a countdown clock showing how much flight time I had left, that number was really jumpy. So for example, I would be recording a video, and the battery life would drop by six or seven minutes, while the video being recorded was just three or four minutes long.

The camera and its gimbal pop easily out of the Karma and attach to a handheld stabilizer with its own battery and controls for capturing photos and video. The stabilizer works well, smoothing out the video captured by the camera when you carry it around. And when it comes as part of the package with a $799 drone, it feels like a good deal. GoPro even throws in a number of different mounts when you buy the Karma package, which is also a nice value add.

The stabilizer is a great action sports tool

There are a number of important distinctions between GoPro’s handheld and DJI’s competing product, the Osmo. The Osmo is more expensive, running you $649 for the version with a camera and $299 for the version that uses your smartphone. And the Osmo isn’t meant to take a beating the way GoPro’s Hero camera is, especially not if you’ve attached your smartphone as your viewfinder.

On the flip side, the Osmo promises about four hours of battery life, versus under two hours for Karma’s handheld. And while the Hero 5 camera has a screen you can use as your viewfinder when filming, it’s very small and often hidden behind the handle of the device. You’re sacrificing battery life and ease of use for durability. Osmo is a more powerful tool for a vlogger on the red carpet, while Karma is something you can strap to your chest while mountain biking.

As someone who has flown a lot of drones, there are questions I can answer about the Karma. Is it a great drone? No, not by today’s standards. It’s basic, kind of like a mid-tier Android smartphone that checks all the boxes that more trailblazing units have established over the last few years.

Is there anything compelling about the Karma? Yeah, if you already own a GoPro and are primarily into action sports, I would say this might be a nice starter kit, something that lets you get a taste of what’s possible in the air while also adding to what you can do on land and in the water. But that’s really the best argument I can make for it. If you don’t need a handheld stabilizer or don’t own a GoPro, there is no reason to settle for a drone with a spotty track record and a total lack of cutting-edge features.

Location photography by Sean O'Kane and Vjeran Pavic / The Verge

A nice package for action sports fanatics, but far from a great drone