Share All sharing options for: Razer Blade review: the Goldilocks of gaming laptops

The Razer Blade is a laptop defined by compromises.

Consider Razer’s slim gaming laptop range, where the 14-inch Blade sits square in the middle of the line. It’s bracketed by the smaller 12.5-inch Stealth below it, which relies on integrated Intel graphics instead of a dedicated graphics card, and the massive 17.3-inch Blade Pro, which theoretically offers even more power at a larger size But like many of Razer’s decisions around the Blade, its middle-of-the-road stance tends to make it just right for most people. Carrying the $1,899.99 Blade around isn’t nearly as onerous as lugging around the Pro, but it’s still a big enough laptop to fit in a full graphics card to play almost any recent game.

The entire concept of the Blade represents a compromise

The entire concept of Razer’s Blade series represents a compromise, too: it’s a gaming laptop that’s much smaller and more portable than almost any other PC gaming machine, but that comes at the sacrifice of the long-term upgradability that a desktop or even a bulkier laptop provides. Like Microsoft’s Surfaces or Apple’s MacBooks, the Blade is a closed machine — even the RAM is soldered down, and you’ll void your warranty just by cracking open the case. So whatever specs you buy it with are what you’ll be stuck with forever. Fortunately, the newly upgraded Blade packs some serious specs that should carry it for a couple of years.

Visually, the Blade is virtually identical to last year’s model. Changes are found instead on the inside, where Razer has upgraded the processor to an Intel Core i7-7700HQ from the latest Kaby Lake generation (clocked at 2.8GHz, with a boost up to 3.8GHz). The Blade also has Nvidia’s new GTX 1060 GPU with 6GB of memory, a speedy PCIe M.2 SSD (available in 256GB, 512GB, and 1TB sizes), and 16GB of RAM. If you were building a gaming laptop from scratch today, it’d be hard to come up with better specs for the needs of most people, which helps with the fact that nothing is upgradable after the fact in this machine.

In a lot of ways, the Razer Blade is almost like the MacBook Pro that Apple should have made: the latest powerful hardware, both USB 3.0 ports and a USB-C jack, an HDMI port, and a proper black color, rather than the slate gray Touch Bar models. And it supports VR, which no Apple machine, laptop or desktop, is certified for (although the Blade still can’t charge over USB-C, using a legacy barrel port to actually charge the battery).

The rest of the hardware is essentially taken wholesale from the old model. The chassis is a gorgeous, deep black aluminum that almost instantly became coated with dozens of fingerprints as soon as I took it out of the box. But aside from the company’s signature glowing green snake logo on the lid, the Blade continues to be a welcome breath of elegant and restrained design in a gaming PC market that all too often focuses on "edgy" plastic protrusions and angular vents.

The keyboard features Razer’s Chroma lighting system, which allows you to illuminate specific keys and other compatible Razer accessories in different colors in sync with your game. It’s a cool gimmick, assuming you’ve got a game that supports it, but otherwise it’s probably easiest to just set it to a single, less distracting color. The keys themselves held up fine in both typing and gaming use, although the switches are a bit softer than I usually prefer.

That said, the Blade’s hardware does come up short in a few places. The GTX 1060 generates a lot of heat, and the Blade has two fans placed on the bottom to deal with that. And deal with that they do, by spinning up with the sound and fury of what sounded like an actual jet engine, to the point where I had co-workers complaining about the noise while demoing games.

The Blade’s fans would spin up for me almost constantly

And sure, I get the need for the fans to be at full blast when running a graphics-heavy VR demo or a game. But the Blade’s fans would spin up for me almost constantly, even if I was doing something as simple as installing Slack or running a basic text editor (albeit at a quieter level than the gale-force roar that I got when gaming). That said, for all the extra noise, I never experienced any issues with the Blade overheating or even getting excessively warm. As a final note, the bottom-mounted fans also mean that the Blade has some oversized rubber feet on the bottom to raise it up for airflow, which adds a bit to the thickness of the laptop.

You’ll also want to buy a mouse, which you’ll need whether you’re playing games or just trying to use the Blade in day-to-day use. The built-in trackpad, which is not a Microsoft Precision trackpad, will work in an emergency. But for more pedestrian tasks like writing or web browsing it’s simply just bad, with laggy scrolling and false positives that would randomly select chunks of text while I was trying to write. As for gaming with the trackpad, the only thing I can do is strongly recommend against it. You, like me, will probably lose whatever it is you’re playing. Badly.

The built-in trackpad is simply bad

As a final note, the Blade’s screen is also extremely average for a modern laptop. While Razer is producing a model with a 4K multitouch display for an extra $500, the configuration I tested had just a 1080p panel, which felt both distinctly low-res and had an off-color, yellowish hue. And while the panel itself is 14 inches on the diagonal, it’s bracketed by some rather large black bezels that distract from the display itself.

As a work computer, the Blade is decidedly overpowered. The 14-inch display was big enough for me to be productive, and Intel’s fastest, newest processor was probably overkill for my usual workload of web browsing, text editing, and some light photo processing. And while I struggled on almost a constant basis using Windows as a operating system, that’s more a fault of my own unfamiliarity with Microsoft’s software than it is the Blade’s ability to run it.

Ultimately, though, the Blade’s is purpose-built for gaming. And gaming is something it does really well. The combination of the relatively low-res screen and top-tier hardware means that the Blade managed to handle almost any game I threw at it with relative ease.

Most of my time on the Blade was spent playing Overwatch, which despite the cartoonish style is actually a fairly demanding game when you run it at maximum settings. The Blade was easily able keep up with the game when frame rate was locked at 60 fps, with almost no dropped frames, even in the most chaotic situations as particle effects flew everywhere. Without locking frame rate, the Blade reliably hit 90 fps when uncapped — which is absolutely overkill, even for competitive level play, but it’s nice to know it can perform at that level. The Blade even handled live-streaming to Twitch well, while still hitting a steady 60 fps.

I also tested out the open-world Just Cause 3, which has been known to have performance issues on other computers, but I had few problems running it on the Blade. Rocket League, similarly, ran at maximum specs without any hiccups. A lot of the Blade’s performance prowess is due to the 1080p screen, which lets the vast majority of the computer’s firepower go toward rendering graphics instead of pushing extra pixels. And when you’re inches away from a display, the Blade’s screen is good enough that it’s well worth the trade-off for smooth, reliable gameplay — at least for me.

Furthermore, between the GTX 1060 and the Kaby Lake i7, the Blade is specced to handle VR gaming — which after testing, it actually does quite well, making it a viable portable VR machine. I tried the Blade with Crytek’s The Climb on the Oculus Rift, perhaps the most demanding VR game on the market, and the Blade was able to keep up — although load times for almost every VR title I tried were quite long. Additionally, as a laptop, some of the more annoying quirks of a VR setup go away with the Blade: since it has a built-in screen, it only needs a single HDMI port to connect to a headset, and the integrated trackpad and keyboard mean that you can save your USB ports for the many inputs you’ll need for most headsets and sensors.

Battery life isn’t usually something you think about when buying a gaming PC, but this is a portable laptop after all, so it matters some here. The Blade held up well under The Verge’s own battery test, (which cycles a series of websites under set brightness conditions), clocking 7 hours and 33 minutes. That’s not anywhere near top of the field for this size of computer, but it’s good enough that you can get through half a day of work before needing to charge.

Gaming unplugged is a bit of a different story, however — playing Overwatch at full settings got just over an hour and a half of playtime before the Blade’s battery gave out, which isn’t entirely surprising given the demands of the game and the high power drain of the GPU. And while the Blade is theoretically capable of making the dream of truly portable PC VR a reality, expect even worse battery life away from a wall when you’re adding extra sensors and a second headset display into the mix; The Climb ate away over a quarter of my battery in less than 15 minutes.

But at the end of the day, the Razer Blade is largely effortless machine. While it lacks the customization of a full-sized gaming desktop, Razer’s made great choices when it comes to the Blade’s hardware, leaving you with a powerful, actually portable gaming laptop that looks great and most importantly, plays games great. The Razer Blade may be based in compromises, but Razer seems to have found a niche that makes it just right. 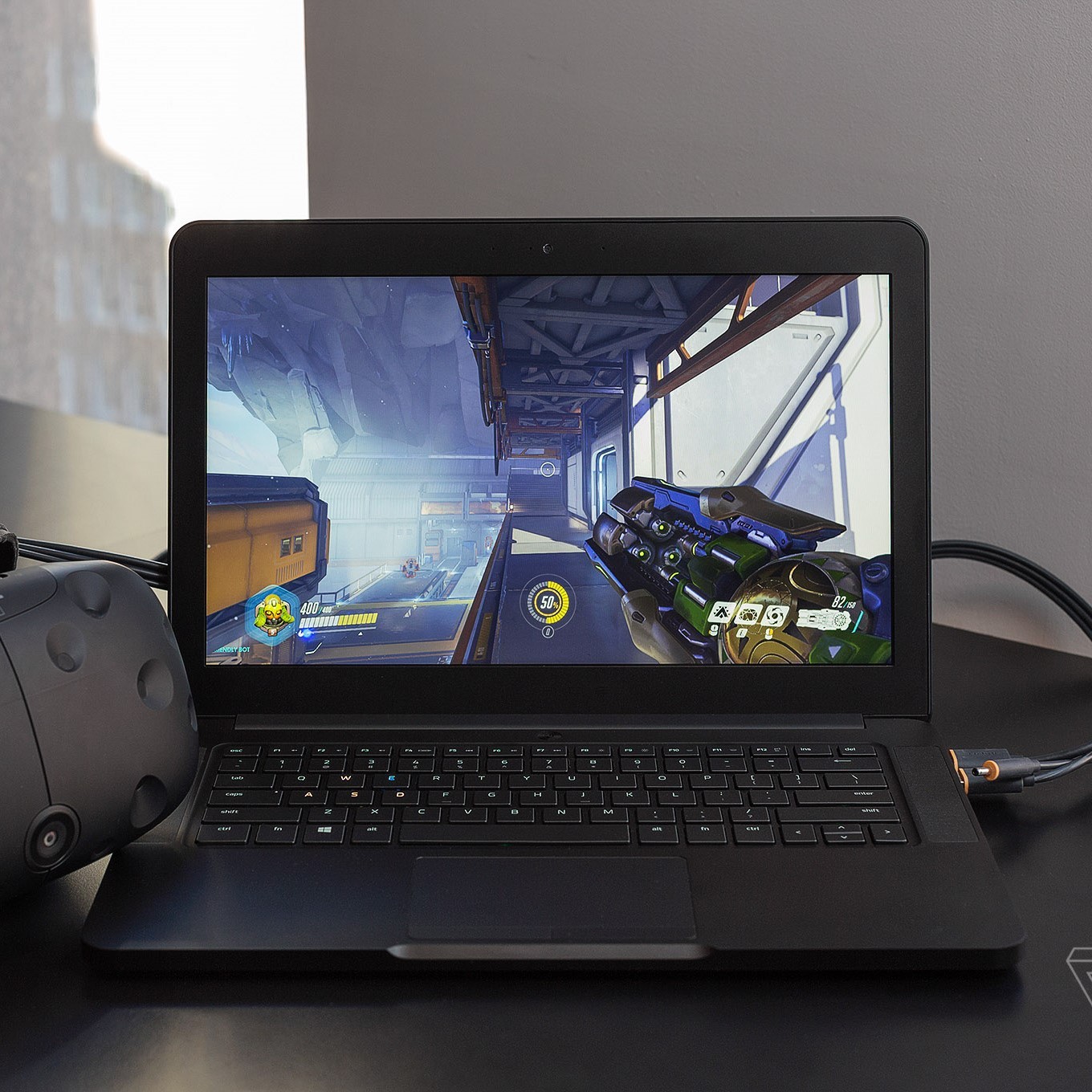